Production, Characterization and Biocompatibility of Marine Collagen Matrices from an Alternative and Sustainable Source: The Sea Urchin Paracentrotus lividus
Next Article in Special Issue

:
Seafoods and seaweeds represent some of the most important reservoirs of new therapeutic compounds for humans. Seaweed has been shown to have several biological activities, including anticancer activity. This review focuses on colorectal and breast cancers, which are major causes of cancer-related mortality in men and women. It also describes various compounds extracted from a range of seaweeds that have been shown to eradicate or slow the progression of cancer. Fucoidan extracted from the brown algae Fucus spp. has shown activity against both colorectal and breast cancers. Furthermore, we review the mechanisms through which these compounds can induce apoptosis in vitro and in vivo. By considering the ability of compounds present in seaweeds to act against colorectal and breast cancers, this review highlights the potential use of seaweeds as anticancer agents.
Keywords:
breast cancer; colorectal cancer; seaweed; therapeutic compounds 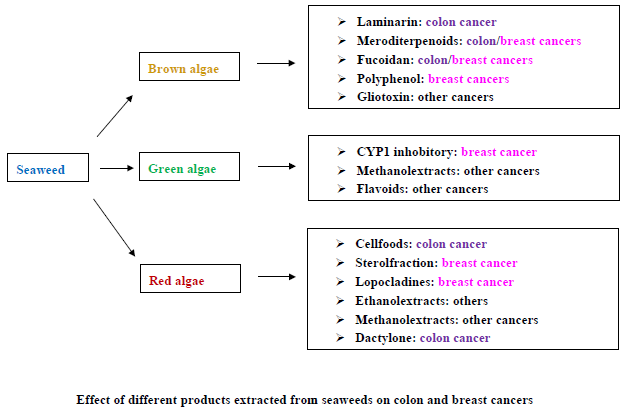 Cancers are a group of diseases characterized by uncontrolled cell growth and spread [1]. Colorectal cancer is the third most common cancer in the world, with nearly 1.4 million new cases diagnosed in 2012 [1]. Moreover, the incidence of this disease has increased steadily in recent years [2]. Despite advances in therapeutic interventions over the past few decades, the mortality rate of patients diagnosed with colorectal cancer remains approximately 40%, mainly due to metastasis to the liver [3].
Breast cancer is the leading cause of death among women in many countries [4]. This is the second most common cancer overall, with nearly 1.7 million new cases diagnosed worldwide in 2012 [1]. As breast cancer progresses, survival factors that inhibit apoptotic cell death are expressed by the cancer cells [5,6].
Due to the increasing incidence of cancer in both developing and developed countries, the use of new chemotherapeutic molecules is needed [7]. Employing natural or synthetic agents to prevent or suppress the progression of invasive cancers has recently been recognized as an approach with enormous potential [8].
Seaweeds (marine algae) are extensively used as functional foods and medicinal herbs, and have a long history of use in Asian countries [9]. Since certain seaweeds have long been used for the treatment of cancer, many crude or partially purified polysaccharides from various brown, green, and red algae have been tested for their antitumor activities [10] (Table 1). These studies have indicated that marine algae constitute a promising source of novel compounds with potential as human therapeutic agents. In particular, algae have been considered as a potential source of new bioactive compounds [7].
Several studies have reported that compounds extracted from seaweed may be effective anticancer agents. This review summarizes the various effects of seaweed-derived compounds on colorectal and breast cancers via promotion of cancer cell apoptosis.
Table 1. The effects of seaweeds and their compounds on colorectal, breast and other cancers.
+: effects reported; -: no effects reported; IC50 = the half-maximal inhibitory concentration; Seaweeds with two IC50 values had two different therapeutic compounds tested; * Cellfood designates all of the mineral salts and trace elements extracted from seaweeds.

Breast cancer is the leading cause of death among women in many countries [4]. Although male breast cancer is less common, a few studies have revealed that the incidence has increased over the past 25 years [60]. Scientists have aimed to treat breast cancer without harming the patient by exploiting the differences between cancerous and normal cells. Nutritional strategies have been applied to study populations with a low incidence of breast cancer. In Asia, seaweeds have been eaten for at least 5000 years [61]. These populations have a low incidence of breast cancer. Certain brown and red algae are known for their anticancer properties [10,62]. In cells treated with seaweed, apoptosis was observed [63], and the authors speculated that seaweed could be a breast cancer-preventing food.
Some studies recently evaluated the effect of a brown seaweed (Sargassum muticum) methanol extract (SMME) on the proliferation of MCF-7 and MDA-MB-231 breast cancer cell lines [9] by conducting morphological assessments of apoptosis, caspase assays, and chick chorioallantoic membrane (CAM) assays. These methods were used to determine the morphological alterations induced by SMME to evaluate its time-dependent effects on caspases 8, 9, and 3 by using caspase assays, and also to evaluate the anti-angiogenic effects of SMME using the CAM assay. They observed that treatment with SMME significantly decreased angiogenesis, leading them to speculate that SMME could decrease cancer cell proliferation and increase apoptosis of human breast cancer cells in a time- and dose-dependent manner (Table 4).
Fucoidan was reported to enhance the activity of natural killer (NK) cells, which have anticancer activity [64]. The effects of crude fucoidan extracted from Fucus vesiculosus on the growth of breast cancer have been determined in vitro and in vivo [31]. Crude fucoidan significantly reduced the number of viable 4T1 cells (a mouse tumor cell line used as a model of highly metastatic breast cancer), enhanced apoptosis, and down-regulated the expression of vascular endothelial growth factor (VEGF). The mechanisms thought to be responsible for these fucoidan-mediated effects are inhibition of the expression of Bcl-2 (Bcl-2 preserves the mitochondria integrity), survivin, extracellular signal-regulated kinases (ERKs), and VEGF, and an increase in caspase-3 activation.
Table 4. Properties of seaweeds in fight against breast cancer.
A sterol fraction extract of Porphyra dentata, an edible red alga used as a folk medicine in Asia, was evaluated for its effects on myeloid derived suppressor cells (MDSCs) in 4T1 cancer cells (Table 4) [17]. Previous findings indicated that phytosterols such as β-sitosterol, either alone or in combination with campesterol, may offer protection from various tumors [65,66,67]. MDSCs play an important role in tumorigenesis [18,19,20,68,69]. The authors associated the anticancer activity of Porphyra dentata with the presence of β-sitosterol and campesterol, which reduced the suppressive activity of MDSCs and consequently decreased tumor size. These two mechanisms might affect phytosterol-related downregulation of the suppressive activity of MDSCs, which is related to their ROS accumulation and arginase activity.

Many studies have explored the use of seaweed in the fight against several diseases, including colorectal and breast cancers. Various therapeutic compounds from seaweed are able to induce apoptosis through different pathways and molecular mechanisms. Several studies indicated that fucoidan was able to induce apoptosis, inhibit angiogenesis, and suppress lung metastasis of breast cancer in vitro and in vivo [21,22,23,24,31,70]. Furthermore, fucoidan inhibited growth and induced apoptosis of HT-29 colon cancer cells [2]. Laminarin induced apoptosis through the Fas and IGF-IR signaling pathways and through the intrinsic apoptotic and ErbB pathways [29]. This review highlights the importance of seaweed in the fight against colorectal and breast cancer.

This research was supported by the KRIBB Research Initiative Program (KGM4251415), and the Cooperative Research Program for Agriculture Science and Technology Development (Project No. PJ00999901), Rural Development Administration and Republic of Korea.