Lipid-Enriched Parenteral Nutrition and Bloodstream Infections in Hospitalized Patients: Is It a Real Concern?
Previous Article in Journal

Background and Objectives: Romania faces one of the highest cervical cancer burdens in Europe though it is a preventable cancer through population screening by cytology and human papillomavirus (HPV) detection. Also, it has one of the highest incidences of human immunodeficiency virus (HIV) infection. HPV and HIV coinfection are frequently encountered. The aim of study was to establish the prevalence of HPV infection among HIV-positive women in Southeast Region of Romania, to genotype high risk HPV types -and to correlate the results with clinical data and cytological cervical lesions. Materials and Methods: 40 HIV-positive women were screened for HPV types and for cytological cervical lesions. The findings were evaluated in correlation with CD4 cell counts, HIV viral load, age at first sexual intercourse, number of sexual partners, vaginal candidiasis, and Gardnerella using statistical methods. Results: 19/40 (47.5%) women were positive for HPV types, 63.15% infected with single HPV type and 36.85% with multiple HPV types. The most frequent types were type: 31 (42.1%), 56 (31.57%), 53 (15.78%). On cytology, 34 (85%) women were found with NILM of which 38.23% were HPV-positive. Fifteen percent of women had abnormal cytology (three ASC-US, three LSIL), and all of them were HPV-positive. Through analyzing the value of CD4 count, women with CD4 count ≤ 200 cells/μL were found to be significantly more likely to be infected with HPV; meanwhile there was no correlation between the detection of HPV types and HIV viral load. Candida or Gardnerella were more often associated with HIV-positive women with HPV, than in women without HPV. Conclusions: Infection with HPV types is common among HIV-positive women in the Southeast Region of Romania and it is associated with age at the beginning of sexual life, number of sexual partners, CD4 value, vaginal candidiasis, and Gardnerella infection. View Full-Text
Keywords: HIV; HPV; high risk; coinfection; cervical precancerous lesions; pap cytology; CD4; antiretroviral therapy HIV; HPV; high risk; coinfection; cervical precancerous lesions; pap cytology; CD4; antiretroviral therapy
►▼ Show Figures 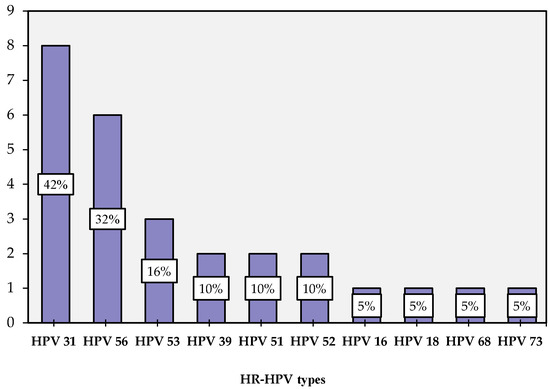