Parkinson’s disease (PD) is a chronic neurodegenerative disease caused by prominent dopaminergic neuron loss and the accumulation of α-synuclein-containing Lewy bodies and Lewy neurites [1]. The characteristic clinical symptoms of PD are motor symptoms, including tremors, rigidity, and bradykinesia [2]. PD is the second most-common neurodegenerative disease, after Alzheimer’s disease [3], and affects 1–2% of individuals over 65 years of age [4], with a reported prevalence of 315 per 100,000 persons of all ages [4]. A previous study reported that the prevalence of PD was lower in Asian populations than in other ethnic groups [5]. Nevertheless, the prevalence of PD in Korea was reported to be 156.9 per 100,000 persons in 2012 and 181.3 per 100,000 persons in 2015, highlighting the increase in PD diagnosis over the past 3 years [6].
Gout is a chronic inflammatory disease characterized by severe pain caused by joint and soft tissue inflammation [7]. Previous studies have reported that uric acid may possess antioxidant properties and that low serum uric acid levels are associated with an increased risk of several neurodegenerative diseases [8,9,10]. Further, hyperuricemia has been reported to reduce the risk of PD [11] and inflammatory arthritis, including gout, has been identified as a risk factor for PD. However, the relationship between gout and PD is still unclear. This study aimed to investigate the association between gout and PD [12,13,14] by using large-scale data.

Data from the NHIS database covering the period from 2002 to 2019 were used. Data from 2002 were excluded as a wash-out period for new patient extraction, and data from 2018 and 2019 were also excluded to secure a follow-up period of at least 2 years. In total, 628,565 participants with a diagnosis of gout (ICD-10, M10) who were prescribed medications for gout, such as colchicine, allopurinol, febuxostat, and benzbromarone for at least 90 days were selected from the NHIS database. In this study, in order to improve the reliability of the diagnosis of patients with gout, the gout diagnosis ICD code was matched with the gout-specific medication code. As this was a study that used diagnostic codes and medication prescription codes, laboratory findings, including uric acid levels, could not be confirmed.
Patients with PD who were assigned a diagnosis code (ICD-G20) and were registered in the rare incurable diseases (RID) system were extracted. Patients with secondary Parkinsonism (G21, G22) or dyskinesia due to other causes (G23–G25) were excluded. The Korean government provides financial support to patients with rare, incurable rheumatic diseases that are specially registered and have been managed since 2009. To be eligible for registration in the RID system, patients must meet the diagnostic criteria of each RID and are carefully reviewed by the corresponding healthcare institution. Only a neurologist or neurosurgeon can register patients with PD according to the United Kingdom PD Society Brain Bank criteria on the RID system. The diagnosis is also made by excluding other forms of secondary parkinsonism. Therefore, diagnoses of patients with PD registered in the RID system are considered highly reliable.
In this study, 215,711 patients with cancer, 85,331 patients with end-stage renal disease (ESRD), and 363 previous patients with PD were removed. A final total of 327,160 new gout patients were extracted. The control cohort was defined as patients who had never received a gout diagnostic code and had never been administered any gout medication. Age and sex (1:1) propensity score matching was performed in the selected control cohort. The flow chart for study cohort selection is presented in Figure 1.

The baseline demographics and clinical characteristics of the patients with gout and the controls at baseline were analyzed using a chi-square test or a Student’s t-test. The Cox proportional hazards model was used to evaluate the effect of gout on the risk of PD, and the results are presented as hazard ratios (HRs) with 95% confidence intervals (CIs) using different adjustment models for potential confounders. There was no multicollinearity between variables, and the proportional hazard assumption was met. Cumulative PD incidence was determined using the Kaplan–Meier method and compared between the two cohorts using the log-rank test. Analyses were performed using the SAS statistical package version 9.4 (SAS Institute Inc., Cary, NC, USA) and R version 3.4.3 (R Foundation for Statistical Computing, Vienna, Austria). A p-value < 0.01 was considered statistically significant.

This population-based study did not identify an association between gout and PD. Clinical characteristics, including frequency according to age group and sex distribution in domestic patients with gout, were confirmed. Further, our analysis identified the percentage of cardiovascular and metabolic comorbidities. Age, female sex, stroke, and hypertension were identified as independent risk factors for PD, and dyslipidemia exhibited an inverse relationship with PD. Further research is warranted to verify our findings.

This study was approved by the institutional review board of Chungbuk National University Hospital (CBNUH IRB No. 2020-08-007, https://www.e-irb.com:3443/devlpg/nlpgS100.jsp). Patient consent was not required as the study was based on secondary data released for research purposes.

Data cannot be shared publicly because they belong to the National Health Insurance Service (NHIS). There are ethical restrictions on sharing such a data set because these data contain potentially identifying or sensitive patient information. To request data from NHIS, researchers have to apply during the recruitment period and submit a research proposal. Raw data was available to researchers upon reasonable academic request and with the permission of the Korean NHIS Institutional Data Access (https://nhiss.nhis.or.kr/bd/af/bdafa001lv.do). The authors had no special access privileges. 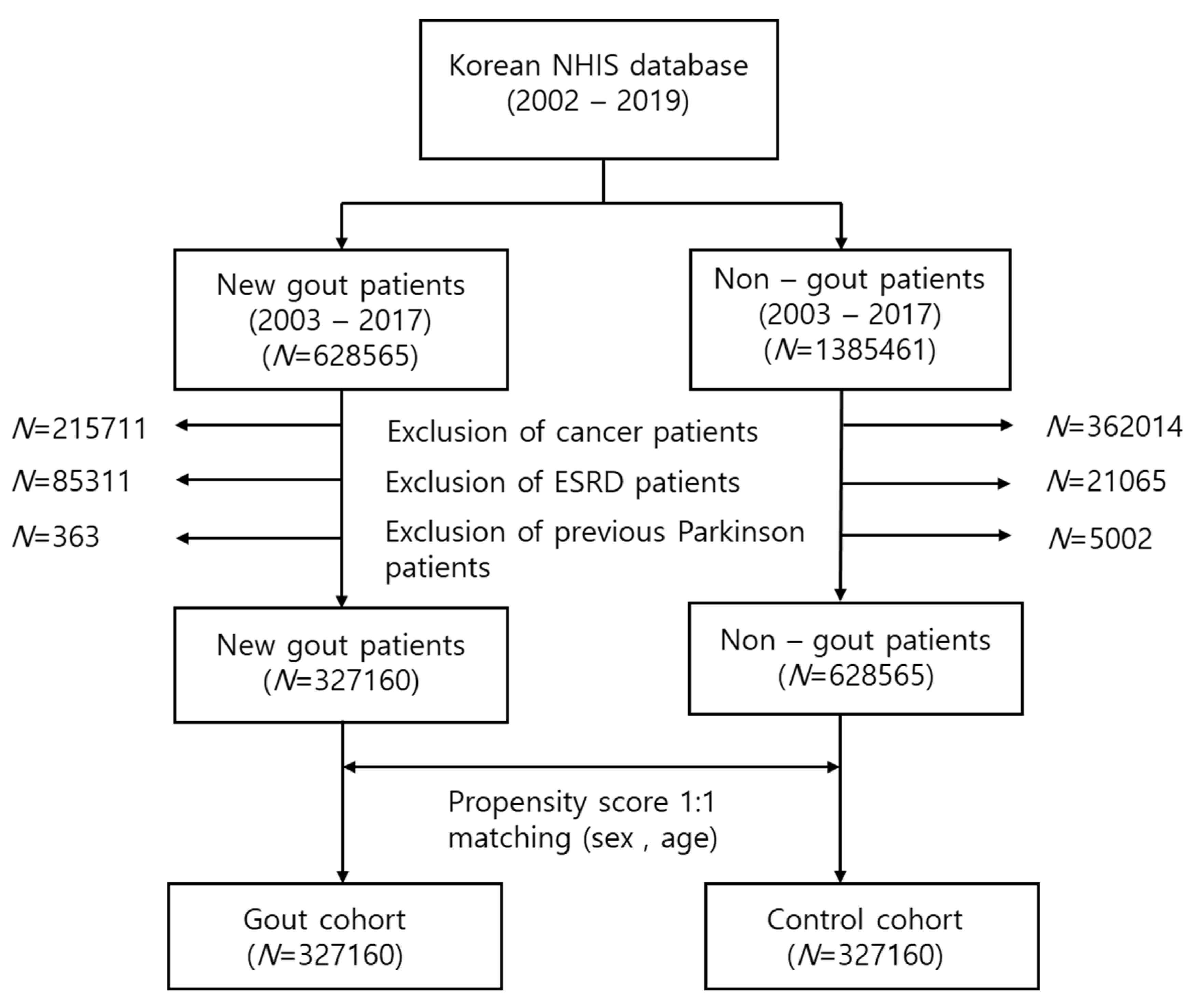 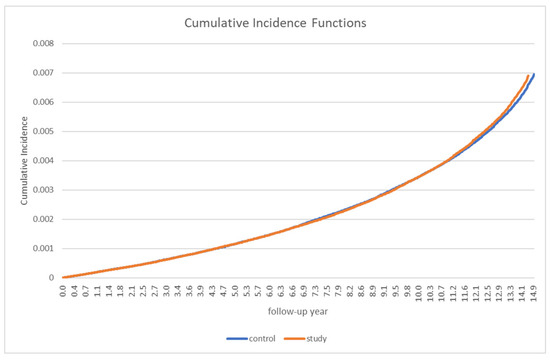 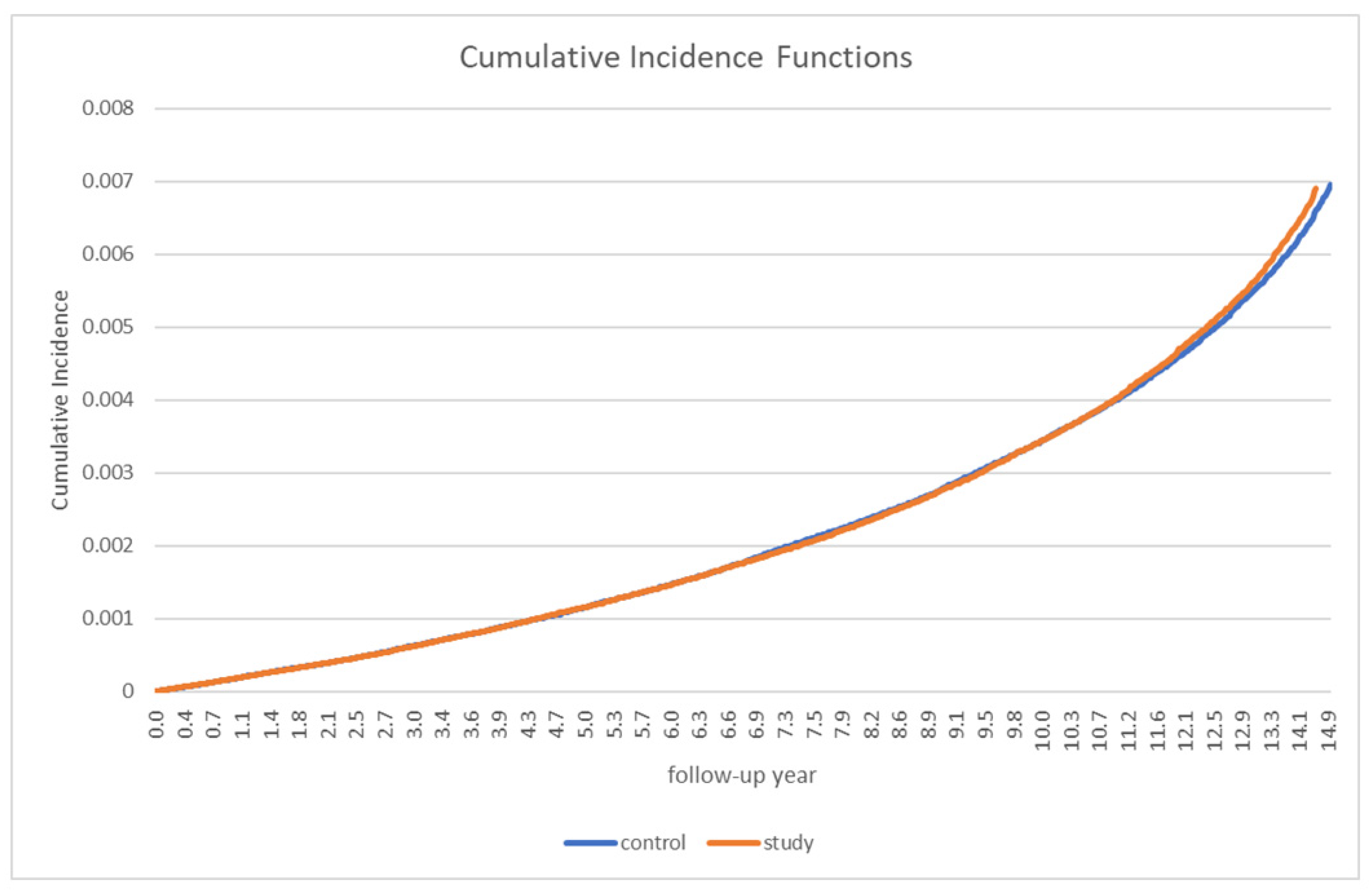