Background and Objectives: The purpose of this pilot study was to evaluate the clinical outcomes of three different methods for increasing the keratinized mucosa (KM) surrounding dental implants with peri-implantitis. Materials and methods: Twenty implant sites with peri-implantitis were divided into: (1) porcine collagen matrix (CM) group: seven implant sites; (2) apically positioned flap (APF) group: eight implant sites; and (3) free gingival graft (FGG) group: five implant sites. The KM width and clinical parameters (probing pocket depth (PPD) and bleeding on probing (BOP)) were measured at time points: before surgery (T0) and 30 (T1), 60 (T2), 90 (T3), and 180 (T4) days after surgery. Results: Regarding KM width, all the groups had significant differences for increasing horizontal and vertical KM width. The CM and FGG groups had greater KM than the APF group. There was a decrease in PPD in all three groups. APF and FGG showed significant differences in PPD at T1 and T2 compared to T0. Only the FGG group showed a significant difference in PPD at T3 and T4 compared with that at T0. BOP values were also reduced in all the groups at T1–T4 compared to T0. The APF and FGG groups showed a significant decrease in BOP. Conclusions: Three surgical therapies presented favorable results for increasing the KM surrounding implants. Compared with the FGG group, the CM showed similar results in increasing the KM around the dental implants with peri-implantitis.
Keywords: dental implantation; peri-implantitis; hard palate; oral mucosa; tissue grafts dental implantation; peri-implantitis; hard palate; oral mucosa; tissue grafts

Following tooth extraction, the remaining keratinized mucosa (KM) is typically narrowed. The muscle attachments, particularly those of the vestibular mentalis, lingual mylohyoideus, and genioglossus, become more prominent; these are, of course, associated with a shallow vestibule [1,2]. Although the importance of KM has been reported, it is currently a controversial issue. Gingival recession is generally reported in the early phase (6–12 months after prosthesis delivery) and may be more pronounced at the sites without KM [3]. The presence of KM is associated with less marginal recession [4]. A systemic review has shown that plaques are easily accumulated at the narrow KM [5]. However, they are not significantly affected by the quality or mobility of the marginal tissue [6]. Preclinical studies have observed inflammatory cell infiltration in both narrow/mobile and wide/firm attached tissues [7,8]. Kennedy et al. reported that the increase in KM did not increase the degree of periodontal health [9].
The requirement of a specific zone of KM surrounding the dental implants to maintain peri-implant health has been a controversial issue. The lack of adequate KM surrounding implants results in a higher plaque accumulation and gingival inflammation and more average annual bone loss [10]. The capability to control plaque accumulation around the implants was better in the presence of KM, emphasizing the critical nature of an adequate KM zone [11]. However, previous studies with multiple regression analysis have not demonstrated any statistically significant association between KM width and peri-implant parameters (plaque, gingival index, or bleeding on probing (BOP)) [12,13].
Several procedures have been used for increasing KM. Apically positioned flap (APF), collagen matrix (CM), and grafting procedures are the major methodologies used for obtaining increased KM. APF is a periodontal surgery in which the entire soft tissue is positioned in the apical direction. The advantages of this procedure are as follows: (1) minimum pocket depth, (2) minimum bone loss due to the prevention of bone exposure, and (3) no more gingival removal during surgery. Grafting procedures use palatal gingiva and other materials to increase the KM of other oral cavity areas. Free gingival graft (FGG) is a predictable method because it maintains the original characteristics as a firm mucosa of the palate [14]. A previous study has reported that APF and vestibuloplasty in combination with FGG were the most effective procedures for increasing the keratinized tissue [15]. However, the disadvantages of this procedure include pain and bleeding during surgery [14]. CM has been considered as an alternative to overcome the disadvantages of FGG.
The relationship between the presence of KM and peri-implant mucositis (peri-implantitis) remains controversial. Peri-implant mucositis and peri-implantitis are inflammatory processes that include gingival swelling, redness, and alveolar bone loss [16]. Although some studies have reported higher rates of peri-implant mucositis at the implants surrounded by or lacking an inadequate KM width (< 2 mm), some other studies have found no association or a positive association between KM width and peri-implant mucositis [17,18]. However, evidence regarding the effect of KM on the long-term health of the peri-implant tissue remains equivocal. Therefore, peri-implant mucositis and peri-implantitis may be initiated by the absence of KM [19,20]. To enhance KM, several techniques, including APF, CM, and FGG, have been clinically used [21,22]. Lin et al. reported that these procedures led to mature and stable soft tissues [4]. However, whether KM has a significant role in treating peri-implantitis remains unknown. Therefore, the purpose of this study was to assess the clinical outcomes of three different surgical therapies (CM, APF, and FGG) for increasing KM surrounding dental implants with peri-implantitis.

The study was conducted as a pilot clinical trial. The Research Ethics Committee of Jukjeon Dental Hospital, College of Dentistry, Dankook University (Approval No. 201910-001-001; approved date: 12 November 2018) approved the study’s design and procedures. We performed all protocols according to the Declaration of Helsinki and the Consolidated Standards of Reporting Trials 2010 statements. We obtained written informed consent from all the patients who voluntarily participated in the study. In total, 16 patients who visited the Department of Periodontics of Jukjeon Dental Hospital, College of Dentistry, Dankook University, between November 2018 and February 2020 were involved in this study. We included 20 peri-implantitis sites with an absence of KM (less than 2 mm) in this study. Additionally, we excluded any patients with implant mobility, no panoramic images, as well as those who did not agree to participate in this study. Table 1 shows the general characteristics (e.g., age, gender, and jaw position) of the participants.

The design of this study is a pilot test. Previous studies were involved in calculating adequate power involving buccal soft tissue augmentation [23,24]. The sample size per group was calculated to detect a standard deviation with 80% power and a 5% alpha error. The required minimum sample size was 7 subjects, and the target sample size was set at 21 subjects for cluster analysis.

An experienced periodontist (J.T.L) measured all clinical parameters (probing pocket depth (PPD) and BOP) at six sites per implant using a periodontal probe (PCP-12, Hu-Friedy, Rotterdam, Netherlands). The initial examination was performed before surgery (T0). Follow-up examinations were conducted at the following time points: 30 (T1), 60 (T2), 90 (T3), and 180 (T4) days after the surgery (Figure 2). The horizontal/vertical KM width (vertical KM width: a distance from the free gingival margin to MGJ (mucogingival junction); horizontal KM width: a distance between the extension lines in the apical direction at the mesial and distal margin of the implant prosthesis) was measured at the buccal aspect of each implant, whereas the augmented sites were evaluated in terms of their clinical appearances (texture and color) using the clinical photo by two independent investigators (H.S.C and J.T.L). The method was a modification of the method reported by Lim et al. [15]. Regarding peri-implantitis disease classification, we used a cone-beam computed tomography (CBCT) scanner (Kodak 9500®, Carestream Health, Rochester, NY, USA) in this study, which provides a grayscale image of 14 bits with a voxel size of 0.2 mm per side. The CBCT images were viewed using 3D imaging software (OnDemand 3D, Cybermed Co., Seoul, Korea). Panoramic and intraoral radiographic X-ray was also used. Based on these data, all implants were classified according to previous studies [25,26]. Two investigators (H.S.C and J.T.L) also evaluated the classification of each implant.

Each site was considered as a statistical unit for statistical analysis. The mean width of the keratinized tissue was calculated at each measuring point: T0, T1, T2, T3, and T4, and the collected data (mm) were presented as mean ± standard deviation. Statistical analyses were performed using the SPSS Statistics 23.0 software (IBM Corp., Armonk, NY, USA). The Wilcoxon signed-rank test was used for intragroup comparisons (T0 vs. T1 and T2 vs. T3), whereas the Kruskal–Wallis test with post-hoc Bonferroni correction was used for intergroup comparisons. Statistical significance was set at p < 0.05 for this study.

The analysis was performed based on the number of probing sites (six whole sites and three buccal sites) because the CM, APF, and FGG procedures were mainly performed on the buccal gingiva (Table 2 and Figure 3).

Table 2 and Figure 3 also provide a summary of BOP. The analysis also comprised subgroups of six whole sites and three only buccal sites.

The study was conducted according to the guidelines of the Declaration of Helsinki, and approved by the Institutional Review Board for Clinical Research at Jukjeon Dental Hospital, College of Dentistry, Dankook University (approval no. 201910-001-001; approved date: 12 November 2018)

All available data are presented within the article or are available on request from the corresponding author. 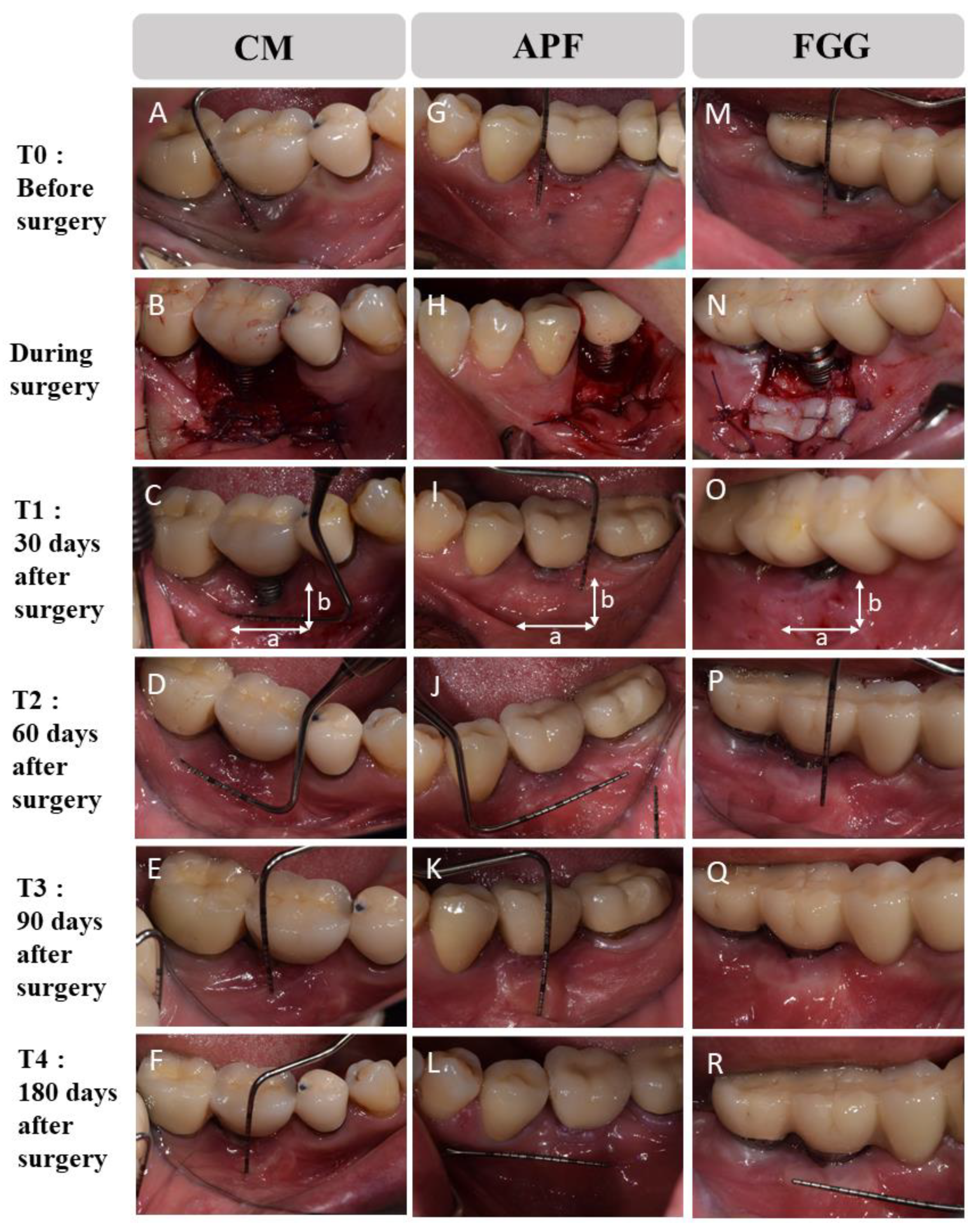