The Art of Managing Conversions between Antiepileptic Drugs: Maximizing Patient Tolerability and Quality of Life
Next Article in Special Issue

Chemotherapy-induced nausea and vomiting (CINV) is a complex pathophysiological condition and consists of two phases. The conventional CINV neurotransmitter hypothesis suggests that the immediate phase is mainly due to release of serotonin (5-HT) from the enterochromaffin cells in the gastrointestinal tract (GIT), while the delayed phase is a consequence of release of substance P (SP) in the brainstem. However, more recent findings argue against this simplistic neurotransmitter and anatomical view of CINV. Revision of the hypothesis advocates a more complex, differential and overlapping involvement of several emetic neurotransmitters/modulators (e.g. dopamine, serotonin, substance P, prostaglandins and related arachidonic acid derived metabolites) in both phases of emesis occurring concomitantly in the brainstem and in the GIT enteric nervous system (ENS) [1]. No single antiemetic is currently available to completely prevent both phases of CINV. The standard antiemetic regimens include a 5-HT3 antagonist plus dexamethasone for the prevention of acute emetic phase, combined with an NK1 receptor antagonist (e.g. aprepitant) for the delayed phase. Although NK1 antagonists behave in animals as broad-spectrum antiemetics against different emetogens including cisplatin-induced acute and delayed vomiting, by themselves they are not very effective against CINV in cancer patients. Cannabinoids such as D9-THC also behave as broad-spectrum antiemetics against diverse emetic stimuli as well as being effective against both phases of CINV in animals and patients. Potential side effects may limit the clinical utility of direct-acting cannabinoid agonists which could be avoided by the use of corresponding indirect-acting agonists. Cannabinoids (both phyto-derived and synthetic) behave as agonist antiemetics via the activation of cannabinoid CB1 receptors in both the brainstem and the ENS emetic loci. An endocannabinoid antiemetic tone may exist since inverse CB1 agonists (but not the corresponding silent antagonists) cause nausea and vomiting. View Full-Text
Keywords: cannabinoids; acute; delayed; emesis; CB1 receptor; endocannabinoids; antiemetics; chemotherapy cannabinoids; acute; delayed; emesis; CB1 receptor; endocannabinoids; antiemetics; chemotherapy
►▼ Show Figures 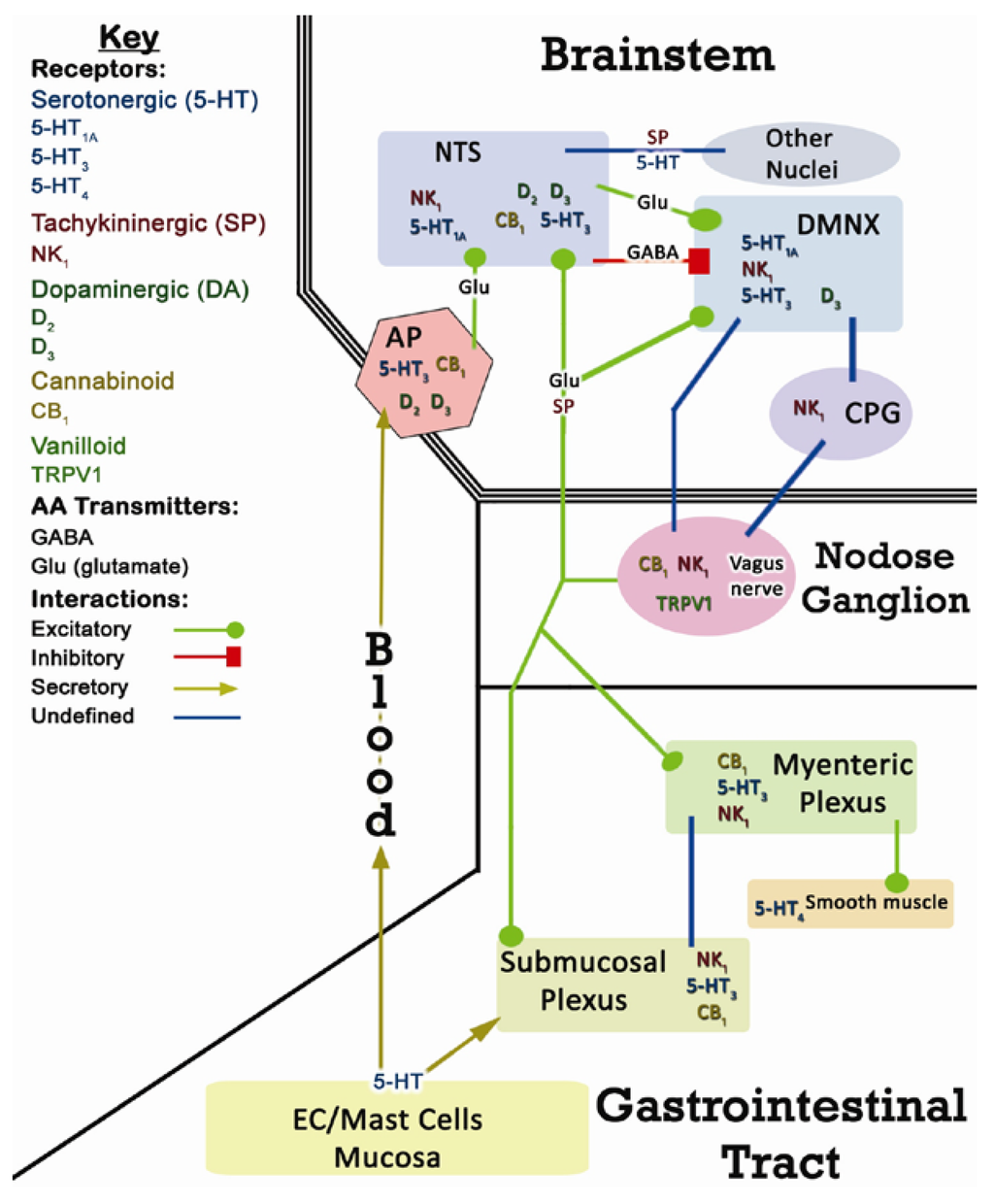 
Darmani, Nissar A. 2010. "Mechanisms of Broad-Spectrum Antiemetic Efficacy of Cannabinoids against Chemotherapy-Induced Acute and Delayed Vomiting." Pharmaceuticals 3, no. 9: 2930-2955.