Emerging Applications of Nanotechnology in Healthcare Systems: Grand Challenges and Perspectives
Next Article in Special Issue

Reports on the long-term survival effect of edaravone, which was approved for the treatment of amyotrophic lateral sclerosis (ALS) in 2015 in Japan, are rare. Herein, we report our retrospective analysis of 45 consecutive patients with ALS who initially visited our hospital between 2013 and 2018. Of these, 22 patients were treated with edaravone for an average duration of 26.6 (range, 2–64) months, whereas the remaining patients were not treated with edaravone and comprised the control group. There were no differences in baseline demographics between the two groups. The primary endpoint was tracheostomy positive-pressure ventilation (TPPV) or death, and the follow-up period ended in December 2020. The survival rate was significantly better in the edaravone group than in the control group based on the Kaplan–Meier analysis, which revealed that the median survival durations were 49 (9–88) and 25 (8–41) months in the edaravone and control groups, respectively (p = 0.001, log-rank test). There were no serious edaravone-associated adverse effects during the study period. Overall, the findings of this single-center retrospective study suggest that edaravone might prolong survival in patients with ALS.
Keywords: amyotrophic lateral sclerosis; edaravone; survival rate amyotrophic lateral sclerosis; edaravone; survival rate

Amyotrophic lateral sclerosis (ALS) is a severe neurodegenerative disease characterized by gradual loss of upper and lower motor neurons. The natural course of ALS includes progressive muscle weakness and atrophy of all four extremities, bulbar palsy, and death due to respiratory failure within a few years [1]. Riluzole, the currently used therapeutic for ALS, has limited efficacy.
Edaravone is a free radical-scavenging drug that eliminates lipid peroxides and hydroxyl radicals that damage neurons [2]. Edaravone was initially shown to improve the modified Rankin scale score 3 months after cerebral infarction in patients who were treated within 72 h of disease onset compared to the placebo group [3]. Therefore, since 2003 edaravone has been commonly used in Japan as a therapeutic agent during the acute phase of cerebral infarction. In addition, Japan was among the first countries to approve edaravone for the treatment of ALS in 2015. Subsequently, the Food and Drug Administration approved edaravone for the treatment of ALS in 2017 [4]. A placebo-controlled phase III trial of edaravone in patients with mild ALS demonstrated that, compared with placebo, edaravone led to a significantly smaller decline in revised ALS functional rating scale (ALSFRS-R) scores over 24 weeks [5]. A follow-up report of the trial further revealed that edaravone was beneficial through 48 weeks [6]. However, only one study [7] has reported the effect of edaravone on survival of patients with ALS. Although that study showed survival rates were significantly improved in patients treated with edaravone compared to those not treated with edaravone, the average treatment duration was 8.8 months, which was relatively short. Therefore, in this retrospective study, we aimed to determine long-term survival rates in patients with ALS treated with edaravone.

The cohort of 45 consecutive patients with ALS comprised 22 patients, including 14 male and 8 female patients, who were treated with edaravone for an average of 26.6 (range, 2–64) months, and 23 patients, including 14 male and 9 female patients, who were not treated with edaravone. The clinical characteristics of the study cohort are presented in Table 1. Because distributions of all continuous variables in both groups were analyzed for normality using the Shapiro–Wilk test (p > 0.05), Student’s t test was performed to compare the variables in both groups. Although the mean age at disease onset tended to be lower in patients treated with edaravone (edaravone group) than in those not treated with edaravone (control group) (64.8 ± 11.0 vs. 71.4 ± 12.5 years), the difference was not statistically significant. Fourteen patients (60.9%) in the control group took riluzole for ALS treatment, but no significant difference was found in the frequency of use between the control and edaravone groups. Additionally, there were no differences in initial symptoms, average duration from onset to first visit, average body mass index (BMI), and disease severity based on the Japanese classification between the two groups. Furthermore, there were no differences in other clinical characteristics, percutaneous endoscopic gastrostomy, and noninvasive positive-pressure ventilation between the two groups.
Figure 1 shows the Kaplan–Meier survival curves of the edaravone and control groups, revealing that the survival rate was significantly improved in the edaravone group compared to the control group (p = 0.001). The median survival durations were 49 (9–88) and 25 (8–41) months in the edaravone and control groups, respectively. Two patients in the edaravone group underwent tracheostomy positive-pressure ventilation (TPPV) at 16 and 62 months following the onset of disease.
The results of the multivariate Cox proportional hazard analysis are shown in Table 2. The hazard ratio to survival of edaravone adjusted by age at onset, treatment with riluzole, and disease severity grade on baseline remained statistically significant (adjusted hazard ratio = 0.36, p < 0.05, 95% CI 0.14–0.98).
The reasons for discontinuation of edaravone treatment were worsening of ALS in seven cases and patient request in two cases. The discontinuation of edaravone due to adverse effects was not necessary in any of the cases in the present study. One patient experienced eczema in the palms during edaravone administration, which was easily tolerated with topical steroid ointment. This patient thus continued to receive edaravone and was included in the analysis.

Forty-five consecutive patients with clinically definite or probable ALS who were diagnosed using the revised El Escorial criteria [22] and treated at Obihiro Kosei Hospital between 2013 and 2018 were included in the study. The patients were categorized into those treated with edaravone and those who were not treated with edaravone (controls). Edaravone became available for patients with ALS in 2015, and its use was based on patient preference and the absence of renal dysfunction according to the standard protocol, as edaravone cannot be administered to patients with renal dysfunction [5]. Edaravone was initially administered for 14 consecutive days, which was followed by a 2-week drug-free period, and was subsequently administered in 28-day cycles. In each cycle, edaravone was administered for 10 days within a 2-week period, according to the standard protocol. Note that edaravone is intravenously administered and is orally unavailable. Therefore, it was administered by a nurse each time and under these conditions, medication compliance was guaranteed.
Data on clinical characteristics, including disease severity based on the Japanese ALS severity classification [23], were retrospectively collected to compare the edaravone and control groups. Disease severity was determined based on the following grading system: grade 1, ability to work or perform housework; grade 2, ability to live independently but inability to work; grade 3, requiring assistance for eating, excretion, or ambulation; grade 4, presence of respiratory insufficiency, difficulty in expectoration, or dysphagia; grade 5, using a tracheotomy tube, tube feeding, or tracheotomy positive-pressure ventilation. The primary study endpoint was TPPV or death, and the follow-up period ended in December 2020.

Differences in clinical characteristics between the two groups were analyzed using the chi-squared test for categorical variables and Student’s t test for continuous variables following the verification of normality using the Shapiro–Wilk test. Survival from the disease onset to primary endpoint was analyzed using Kaplan–Meier curves and the log-rank test. The Cox proportional hazard model was used to assess the simultaneous effects of several independent variables on survival. For all analyses, a p-value of <0.05 was considered statistically significant. All statistical analyses were performed using SPSS version 25 (IBM, NY, USA).

The findings of this retrospective single-center study including 45 patients with ALS suggest that edaravone improves survival and maintains its effect over several years without serious adverse events.

The study was conducted according to the guidelines of the Declaration of Helsinki and approved by the Ethics Committee of the Obihiro Kosei Hospital (project identification code: 2018-046).

The present study was not an interventional study and did not contain identifiable or patient data. All data used in the study were collected during routine patient care and were analyzed as secondary use. Therefore, the need to obtain written informed consent was waived by the Institutional Review Board.

All data have been present in main text. 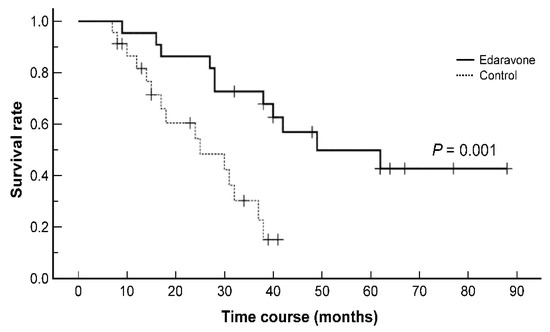