Colchicine-Binding Site Inhibitors from Chemistry to Clinic: A Review
Next Article in Special Issue

Current Trends in the Pharmacotherapy of Cataracts
Previous Article in Journal

2019: An Awesome Year for Pharmaceuticals
Previous Article in Special Issue

APELA Expression in Glioma, and Its Association with Patient Survival and Tumor Grade

Potential anti-inflammatory and anticarcinogenic effects of aspirin (ASA) may be suitable for melanoma chemoprevention, but defining biomarkers in relevant target tissues is prerequisite to performing randomized controlled chemoprevention trials. We conducted open-label studies with ASA in 53 human subjects with melanocytic nevi at increased risk for melanoma. In a pilot study, 12 subjects received a single dose (325 mg) of ASA; metabolites salicylate, salicylurate, and gentisic acid were detected in plasma after 4–8 h, and prostaglandin E2 (PGE2) was suppressed in both plasma and nevi for up to 24 h. Subsequently, 41 subjects received either 325 or 81 mg ASA (nonrandomized) daily for one week. ASA metabolites were consistently detected in plasma and nevi, and PGE2 levels were significantly reduced in both plasma and nevi. Subchronic ASA dosing did not affect 5” adenosine monophosphate-activated protein kinase (AMPK) activation in nevi or leukocyte subsets in peripheral blood, although metabolomic and cytokine profiling of plasma revealed significant decreases in various (non-ASA-derived) metabolites and inflammatory cytokines. In summary, short courses of daily ASA reduce plasma and nevus PGE2 and some metabolites and cytokines in plasma of human subjects at increased risk for melanoma. PGE2 may be a useful biomarker in blood and nevi for prospective melanoma chemoprevention studies with ASA. View Full-Text
Keywords: aspirin; salicylate; PGE2; AMPK; plasma; nevi aspirin; salicylate; PGE2; AMPK; plasma; nevi
►▼ Show Figures 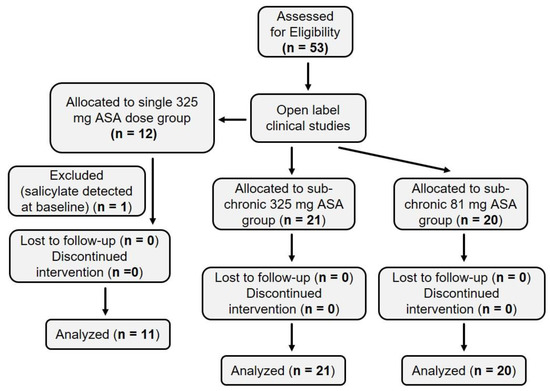