Current Trends in the Pharmacotherapy of Cataracts

Cataracts, one of the leading causes of preventable blindness worldwide, refers to lens degradation that is characterized by clouding, with consequent blurry vision. As life expectancies improve, the number of people affected with cataracts is predicted to increase worldwide, especially in low-income nations with limited access to surgery. Although cataract surgery is considered safe, it is associated with some complications such as retinal detachment, warranting a search for cheap, pharmacological alternatives to the management of this ocular disease. The lens is richly endowed with a complex system of non-enzymatic and enzymatic antioxidants which scavenge reactive oxygen species to preserve lens proteins. Depletion and/or failure in this primary antioxidant defense system contributes to the damage observed in lenticular molecules and their repair mechanisms, ultimately causing cataracts. Several attempts have been made to counteract experimentally induced cataract using in vitro, ex vivo, and in vivo techniques. The majority of the anti-cataract compounds tested, including plant extracts and naturally-occurring compounds, lies in their antioxidant and/or free radical scavenging and/or anti-inflammatory propensity. In addition to providing an overview of the pathophysiology of cataracts, this review focuses on the role of various categories of natural and synthetic compounds on experimentally-induced cataracts. View Full-Text
Keywords: cataracts; lens; lens transparency; lens opacification; lens crystallins; antioxidants; glutathione; superoxide dismutase cataracts; lens; lens transparency; lens opacification; lens crystallins; antioxidants; glutathione; superoxide dismutase
►▼ Show Figures 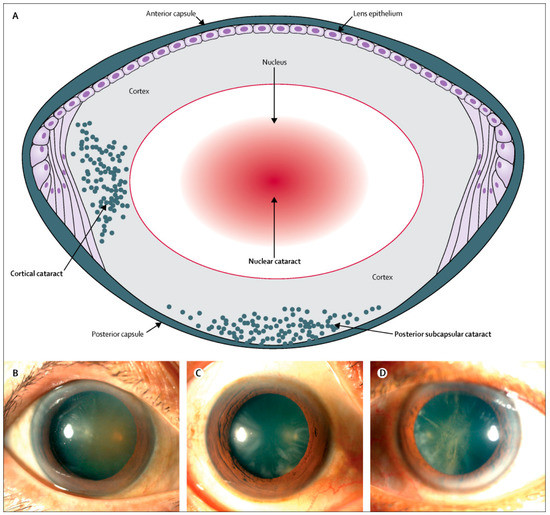