Impairment of the Developing Human Brain in Iron Deficiency: Correlations to Findings in Experimental Animals and Prospects for Early Intervention Therapy

The HFE gene (OMIM 235200), most commonly associated with the genetic iron overload disorder Hemochromatosis, was identified by Feder et al. in 1996, as a major histocompatibilty complex (MHC) class I like gene, first designated human leukocyte antigen-H (HLA-H). This discovery was thus accomplished 20 years after the realization of the first link between the then “idiopathic” hemochromatosis and the human leukocyte antigens (HLA). The availability of a good genetic marker in subjects homozygous for the C282Y variant in HFE (hereditary Fe), the reliability in serum markers such as transferrin saturation and serum ferritin, plus the establishment of noninvasive methods for the estimation of hepatic iron overload, all transformed hemochromatosis into a unique age related disease where prevention became the major goal. We were challenged by the finding of iron overload in a 9-year-old boy homozygous for the C282Y HFE variant, with two brothers aged 11 and 5 also homozygous for the mutation. We report a 20 year follow-up during which the three boys were seen yearly with serial determinations of iron parameters and lymphocyte counts. This paper is divided in three sections: Learning, applying, and questioning. The result is the illustration of hemochromatosis as an age related disease in the transition from childhood to adult life and the confirmation of the inextricable link between iron overload and the cells of the immune system. View Full-Text
Keywords: hemochromatosis; HFE; natural history; T lymphocytes; MHC; CD8+ T cells; prevention hemochromatosis; HFE; natural history; T lymphocytes; MHC; CD8+ T cells; prevention
►▼ Show Figures 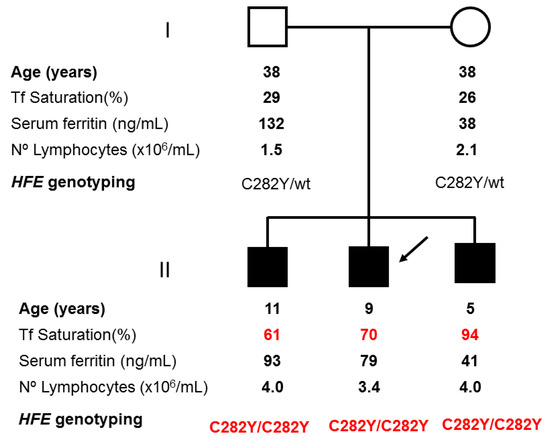