Nearly half a century has passed since the demonstration that cannabis and its chief psychoactive component Δ9-THC lowers intraocular pressure (IOP). Elevated IOP remains the chief hallmark and therapeutic target for glaucoma, a condition that places millions at risk of blindness. It is likely that Δ9-THC exerts much of its IOP-lowering effects via the activation of CB1 cannabinoid receptors. However, the initial promise of CB1 as a target for treating glaucoma has not thus far translated into a credible therapeutic strategy. We have recently shown that blocking monoacylglycerol lipase (MAGL), an enzyme that breaks the endocannabinoid 2-arachidonoyl glycerol (2-AG), substantially lowers IOP. Another strategy is to develop cannabinoid CB1 receptor agonists that are optimized for topical application to the eye. Recently we have reported on a controlled-deactivation approach where the “soft” drug concept of enzymatic deactivation was combined with a “depot effect” that is commonly observed with Δ9-THC and other lipophilic cannabinoids. This approach allowed us to develop novel cannabinoids with a predictable duration of action and is particularly attractive for the design of CB1 activators for ophthalmic use with limited or no psychoactive effects. We have tested a novel class of compounds using a combination of electrophysiology in autaptic hippocampal neurons, a well-characterized model of endogenous cannabinoid signaling, and measurements of IOP in a mouse model. We now report that AM7410 is a reasonably potent and efficacious agonist at CB1 in neurons and that it substantially (30%) lowers IOP for as long as 5 h after a single topical treatment. This effect is absent in CB1 knockout mice. Our results indicate that the direct targeting of CB1 receptors with controlled-deactivation ligands is a viable approach to lower IOP in a murine model and merits further study in other model systems. View Full-Text
Keywords: cannabinoid; glaucoma; ocular pressure; CB1 cannabinoid; glaucoma; ocular pressure; CB1
►▼ Show Figures 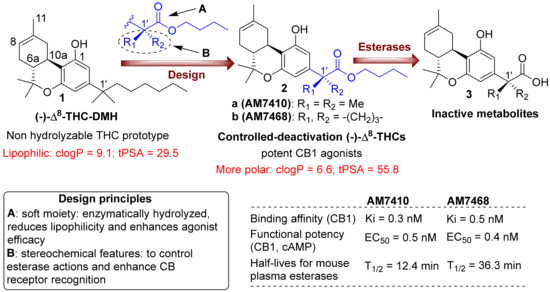