Essential Oils and Antifungal Activity
Next Article in Special Issue

Acorenone B: AChE and BChE Inhibitor as a Major Compound of the Essential Oil Distilled from the Ecuadorian Species Niphogeton dissecta (Benth.) J.F. Macbr
Previous Article in Special Issue

The administration of lithium–pilocarpine (LiPilo) in adult rats is a validated model reproducing the main clinical and neuropathological features of temporal lobe epilepsy (TLE). Previous studies have shown that carisbamate (CRS) has the property of modifying epileptogenesis in this model. When treated with CRS, about 50% of rats undergoing LiPilo status epilepticus (SE) develop non-convulsive seizures (NCS) instead of convulsive ones (commonly observed in TLE). The goal of this work was to determine some of the early changes that occur after CRS administration, as they could be involved in the insult- and epileptogenesis-modifying effects of CRS. Thus, we performed high-performance liquid chromatography (HPLC) to quantify levels of amino acids and monoamines, and c-Fos immunohistochemical labeling to map cerebral activation during seizures. Comparing rats treated one hour after SE onset with saline (CT), CRS, or diazepam (DZP), HPLC showed that 4 h after SE onset, dopamine (DA), norepinephrine (NE), and GABA levels were normal, whereas serotonin levels were increased. Using c-Fos labeling, we demonstrated increased activity in thalamic mediodorsal (MD) and laterodorsal (LD) nuclei in rats treated with CRS. In summary, at early times, CRS seems to modulate excitability by acting on some monoamine levels and increasing activity of MD and LD thalamic nuclei, suggesting a possible involvement of these nuclei in insult- and/or epileptogenesis-modifying effects of CRS. View Full-Text
Keywords: carisbamate 1; temporal-lobe epilepsy 2; brain activity 3 carisbamate 1; temporal-lobe epilepsy 2; brain activity 3
►▼ Show Figures 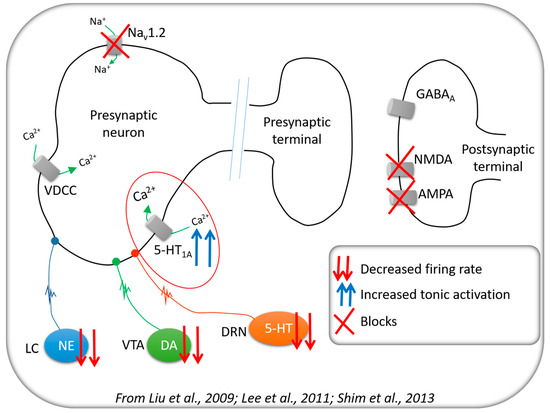