:
Carcinoembryonic antigen (CEA) is a tumor-specific biomarker; however, its low levels in the early stages of cancer make it difficult to detect. To address the need for analysis of ultra-low-level substances, we designed and synthesized a fluorescent aptamer sensor with DNAzyme signal amplification and used it for the detection of CEA in blood. In the presence of the target protein, the aptamer sequence in the recognition probe binds to the target protein and opens the hairpin structure, hybridizes with the primer and triggers a polymerization reaction in the presence of polymerase to generate double-stranded DNA with two restriction endonuclease Nb.BbvCl cleavage sites. At the same time, the target protein is displaced and continues to bind to another recognition probe, triggering a new round of polymerization reaction, forming a cyclic signal amplification triggered by the target. The experimental results show that the blood detection with CEA has a high sensitivity and a wide detection range. The detection range: 10 fg/mL~10 ng/mL, with a detection limit of 5.2 fg/mL. In addition, the sensor can be used for the analysis of complex biological samples such as blood.
Keywords:
fluorescent aptamer sensor; carcinoembryonic antigen; signal amplification; DNAzyme

The sample solution was incubated for 60 min at 37 °C with 10 μL of CEA solution at different concentrations in a mixture of 100 nM H probe, 100 nM primer-3, 5U KF, 5U Nb.BbvCI, 25 μM dNTPs (40 μL), and 150 μL HEPES buffer solution containing 300 nM substrate MB and 20 mM Mg2+ for another 60 min. The final sample solution was added to a quartz cuvette for fluorometric detection.

The detection mechanism of the novel fluorescent aptamer sensor based on isothermal exponential amplification reaction and DNAzyme was depicted in Figure 1. The sensor mainly consists of a hairpin nucleic acid probe H, primers, DNAzyme substrate MB, polymerase and restriction nucleic acid endonuclease Nb.BbvCI. The nucleic acid hairpin probe H consists of three main parts: region I was the aptamer sequence of the target, regions II was the Nb.BbvCI recognition sequence, region III was the Mg2+-dependent DNAzyme complementary sequence. The 3′ end of the H probe sequence contains a mismatch base to prevent polymerization when there was no target. When there was no target, H-probe and primer can exist stably and can’t initiate isothermal exponential amplification reaction to produce deoxyribozyme with catalytic activity. When the target was introduced into the sensor probe, the aptamer sequence of the H-probe specifically binds to the target and opens the hairpin structure of the H-probe. The primers hybridized with the open H-probe to initiate polymerization in the presence of polymerase and monomer to form long double-stranded DNA and replace the target substance at the same time.
The released target can combine with another H-probe to initiate a new round of polymerization, form a cyclic amplification of the target, and produce many double-stranded DNA. The resulting double-stranded DNA contains two cleavage sites of Nb.BbvCI, which are selectively cleaved by Nb.BbvCI to form two new polymerization sites. After polymerization, new double-stranded DNA was formed and DNA initiation chain and DNAzyme sequence were replaced. However, the resulting double-stranded DNA can be cleaved by Nb.BbvCI to form a cleavage-polymerization-replacement cycle, resulting in a large number of DNA initiation chains and DNAzyme sequences. The DNA initiation chain hybridizes with the H-probe and opens the hairpin structure of the H-probe, which reinitiates the polymerization to form double-stranded DNA and displace the DNA initiation strand. The released DNA initiation chain can hybridize with another H-probe, trigger a new round of polymerization, form DNA initiation chain cycle amplification and produce a large number of DNA double strands. These DNA double strands can also initiate the above cleavage-polymerization-replacement cycle reaction, resulting in exponential amplification. After exponential amplification, a large number of DNAzyme sequences were produced, which catalyze the cyclic cleavage of MB substrate probes in the presence of Mg2+, resulting in the separation of fluorescence groups and quenching groups, so the fluorescence signal was enhanced. The ultra-sensitive detection of CEA can be achieved by monitoring the change in fluorescence intensity of the system before and after the addition of the target CEA.

3.4. The Effect of Primer Chain Length on CEA Detection

In the novel fluorescent aptamer sensor designed in this paper, whether the primer chain can effectively hybridize and bind with the target triggered open H sequence was the key to the success of this sensor. On the one hand, if the primer sequence is too short, even in the presence of CEA, the hybridization of the primer chain with the opened H-probe is unstable, and it is difficult to trigger the exponential amplification reaction and finally obtain a very low signal-to-noise ratio. On the other hand, if the primer sequence is too long, the primer may open the H-probe even in the absence of the target, thus triggering an exponential amplification reaction, resulting in a very high background signal. To obtain the best signal-to-noise ratio, we designed four primer chains with different numbers of complementary bases to the H-probe and examined the effect of primer chain length on CEA (1 pg/mL) detection. Figure 4 shows the effect of primer chains (primer-1, primer-2, primer-3 and primer-4) with the number of complementary bases to the H-probe between 6 and 9 on the fluorescence intensity. As can be seen from Figure 4, the highest signal-to-noise ratio was obtained for the detection of CEA when the number of bases of the complementary sequence was 8, i.e., when primer-3 was used for the experiments. Thus, the primer-3 was selected as the optimal primer chain and used for the subsequent CEA detection analysis.

3.5. Study on the Specificity of CEA Identification

3.6. Range of Linearity and Limit of Detection (LOD)

In summary, the novel ultra-sensitive fluorescent aptamer sensor was constructed and used for the analysis of proteins in blood by utilizing the principles of target-mediated nucleic acid aptamer structure conversion triggering isothermal exponential amplification reaction and DNAzyme signal amplification. The sensing method has the following advantages: Firstly, the sensor exhibits high sensitivity and can detect target protein levels down to fg/mL. Secondly, the aptamer sensor has a wide detection range with a linear span of up to six orders of magnitude. Thirdly, the method has good selectivity and can be used for real biological sample analysis. Accordingly, the sensor is based on signal amplification and can be used for highly selective detection of ultra-low levels of proteins. 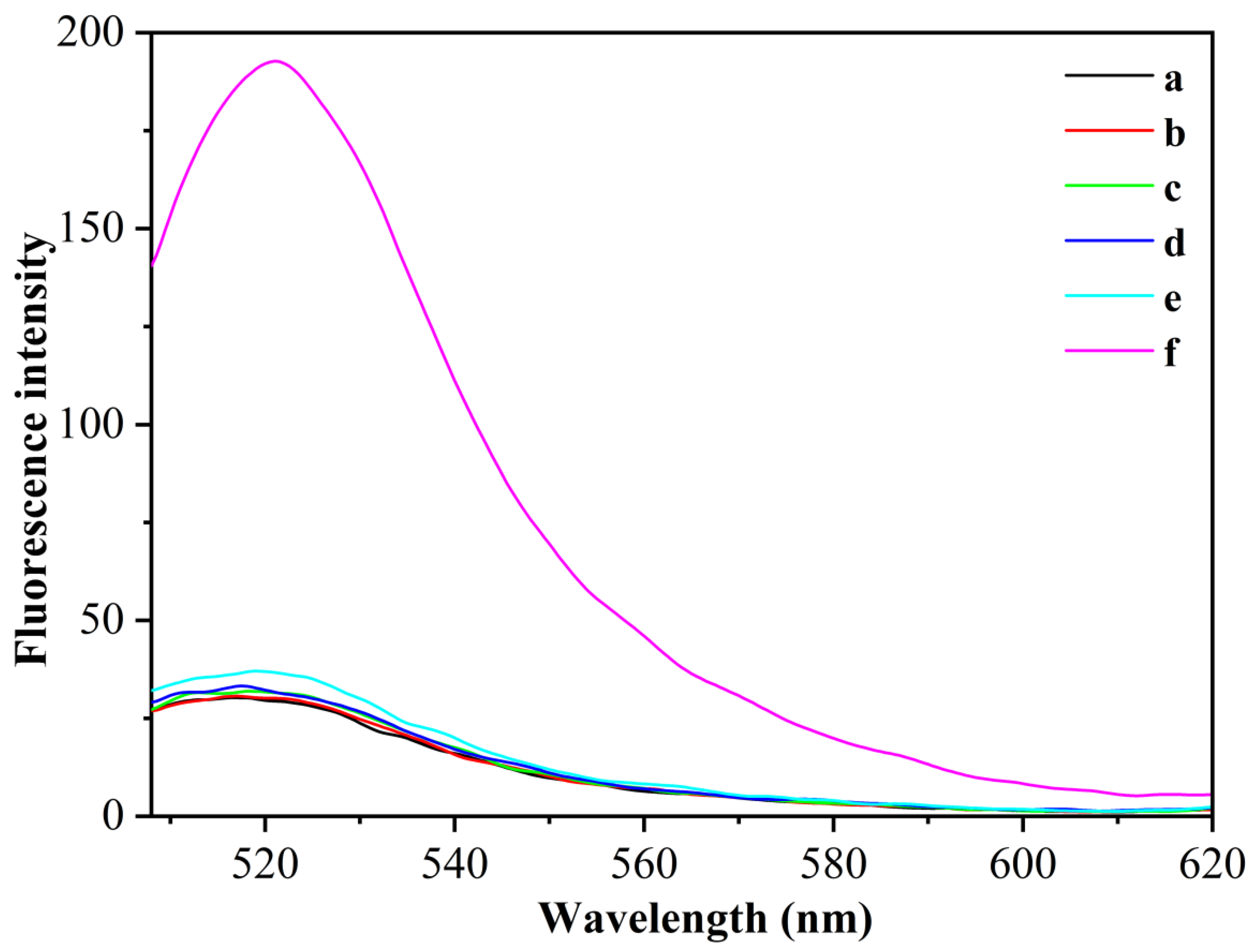 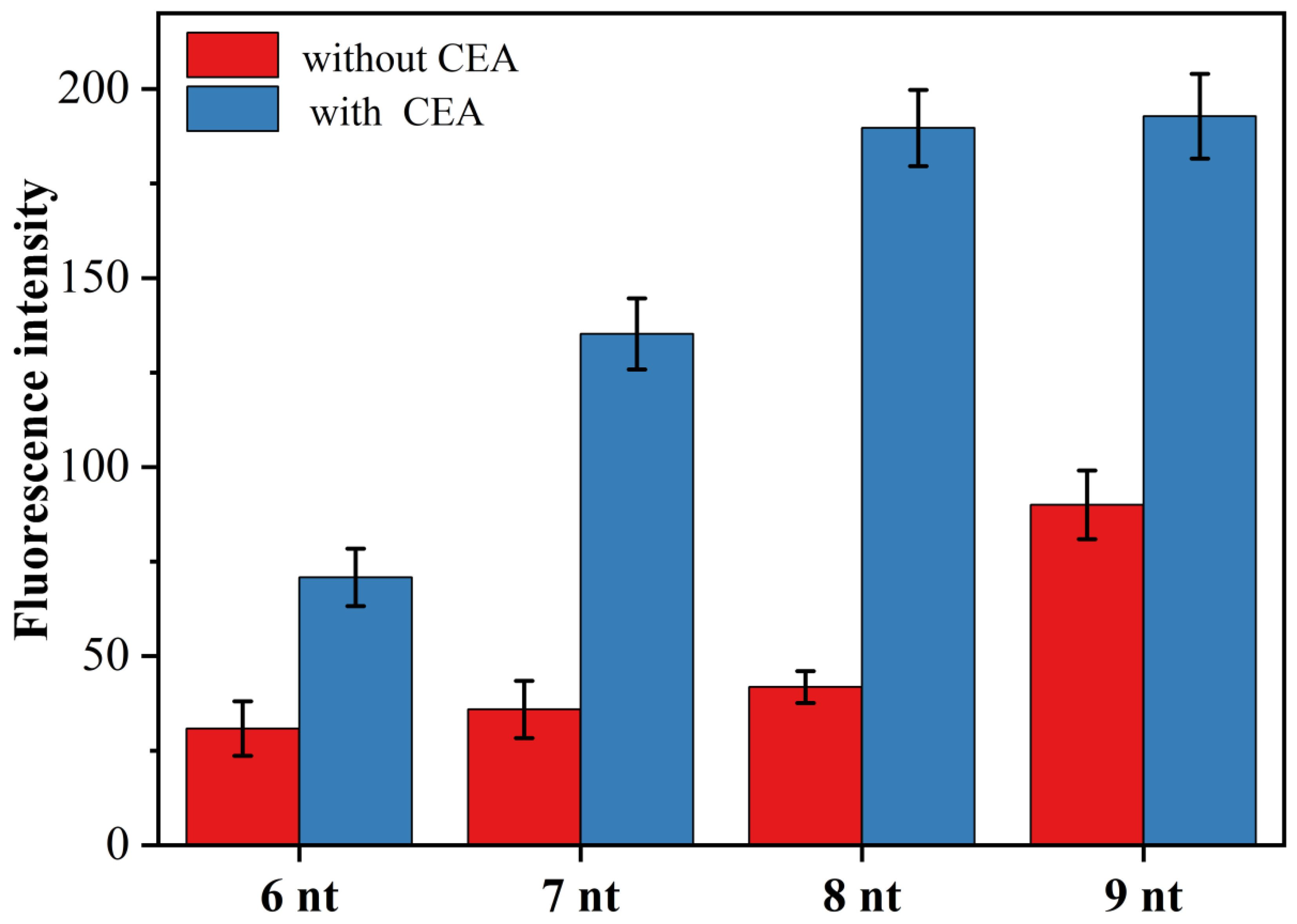