Kinematic Determination of the Aerial Phase in Ski Jumping

The purpose of this study was to find a generic method to determine the aerial phase of ski jumping in which the athlete is in a steady gliding condition, commonly known as the ‘stable flight’ phase. The aerial phase of ski jumping was investigated from a physical point mass, rather than an athlete–action-centered perspective. An extensive data collection using a differential Global Navigation Satellite System (dGNSS) was carried out in four different hill sizes. A total of 93 jumps performed by 19 athletes of performance level, ranging from junior to World Cup, were measured. Based on our analysis, we propose a generic algorithm that identifies the stable flight based on steady glide aerodynamic conditions, independent of hill size and the performance level of the athletes. The steady gliding is defined as the condition in which the rate-of-change in the lift-to-drag-ratio (-ratio) varies within a narrow band-width described by a threshold . For this study using dGNSS, amounted to −1, regardless of hill size and performance level. While the absolute value of may vary when measuring with other sensors, we argue that the methodology and algorithm proposed to find the start and end of a steady glide (stable flight) could be used in future studies as a generic definition and help clarify the communication of results and enable more precise comparisons between studies. View Full-Text
Keywords: ski jumping; dGNSS; LD-ratio; stable flight; steady glide ski jumping; dGNSS; LD-ratio; stable flight; steady glide
►▼ Show Figures 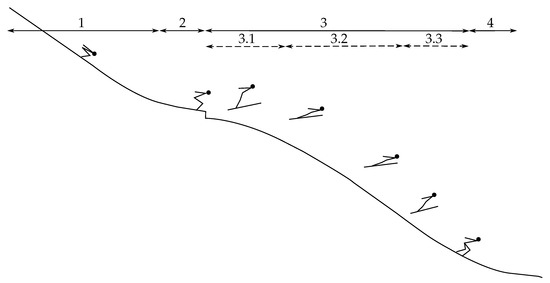