On-body device position awareness plays an important role in providing smartphone-based services with high levels of usability and quality. Traditionally, the problem assumed that the positions that were supported by the system were fixed at the time of design. Thus, if a user stores his/her terminal into an unsupported position, the system forcibly classifies it into one of the supported positions. In contrast, we propose a framework to discover new positions that are not initially supported by the system, which adds them as recognition targets via labeling by a user and re-training on-the-fly. In this article, we focus on a component of identifying a set of samples that are derived from a single storing position, which we call new position candidate identification. Clustering is applied as a key component to prepare a reliable dataset for re-training and to reduce the user’s burden of labeling. Specifically, density-based spatial clustering of applications with noise (DBSCAN) is employed because it does not require the number of clusters in advance. We propose a method of finding an optimal value of a main parameter, Eps-neighborhood (eps), which affects the accuracy of the resultant clusters. Simulation-based experiments show that the proposed method performs as if the number of new positions were known in advance. Furthermore, we clarify the timing of performing the new position candidate identification process, in which we propose criteria for qualifying a cluster as the one comprising a new position. View Full-Text
Keywords: clustering; context recognition; DBSCAN; machine learning; on-body device localization; extensible systems clustering; context recognition; DBSCAN; machine learning; on-body device localization; extensible systems
►▼ Show Figures 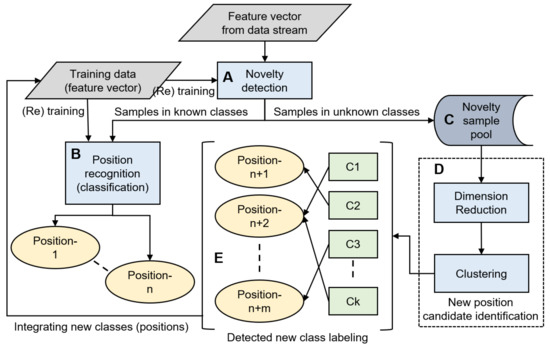 Kaori Fujinami
Kaori Fujinami received his B.S. and M.S. in electrical engineering and his Ph.D. in computer science from Waseda University, Japan, in 1993, 1995, and 2005, respectively. From 2005 to 2006, he was a visiting lecturer at Waseda University. From 2007 to 2017, he was an associate professor at the Department of Computer and Information Sciences at TUAT. In 2018, he became a professor at TUAT. His research interests are machine learning, activity recognition, human–computer interaction, and ubiquitous computing.
Zoom | Orient | As Lines | As Sticks | As Cartoon | As Surface | Previous Scene | Next Scene
We use cookies on our website to ensure you get the best experience. Read more about our cookies here.
Accept
We have just recently launched a new version of our website. Help us to further improve by taking part in this short 5 minute survey here. here.
Never show this again