One of the major concerns in wireless sensor networks (WSNs) is most of the sensor nodes are powered through limited lifetime of energy-constrained batteries, which majorly affects the performance, quality, and lifetime of the network. Therefore, diverse clustering methods are proposed to improve energy efficiency of the WSNs. In the meantime, fifth-generation (5G) communications require that several Internet of Things (IoT) applications need to adopt the use of multiple-input multiple-output (MIMO) antenna systems to provide an improved capacity over multi-path channel environment. In this paper, we study a clustering technique for MIMO-based IoT communication systems to achieve energy efficiency. In particular, a novel MIMO-based energy-efficient unequal hybrid clustering (MIMO-HC) protocol is proposed for applications on the IoT in the 5G environment and beyond. Experimental analysis is conducted to assess the effectiveness of the suggested MIMO-HC protocol and compared with existing state-of-the-art research. The proposed MIMO-HC scheme achieves less energy consumption and better network lifetime compared to existing techniques. Specifically, the proposed MIMO-HC improves the network lifetime by approximately as long as the first node and the final node dies as compared with the existing protocol. Moreover, the energy that cluster heads consume on the proposed MIMO-HC is 40% less than that expended in the existing protocol. View Full-Text
Keywords: wireless sensor network; Internet of Things; energy efficiency; routing protocol; 5G communication wireless sensor network; Internet of Things; energy efficiency; routing protocol; 5G communication
►▼ Show Figures 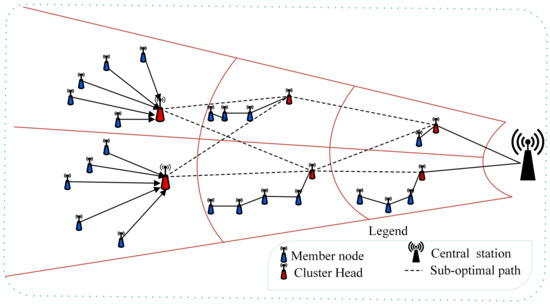