:
I conducted this study to develop an improved method for glycome detection using fluorescent magnetic beads, whose surfaces were modified using lectins, for the highly sensitive detection of saccharides or glycoproteins via fluorescence quenching using a novel fluorescence emitter and quencher pair. The emitter (Cy3 fluorophore) was incorporated into magnetic beads, and a fluorescence quencher (cyanopyranyl group) was bound to glycomes via covalent bonding. The fluorescence intensities of fluorescent magnetic beads containing lectins decreased specifically in the presence of glycomes, which was a result of fluorescence quenching from Cy3 to cyanopyranyl groups due to the formation of a stable complex between lectins and glycome. Fluorescence intensities were plotted as a function of glycoprotein concentration, and good linear relationships were observed. This method enabled the fluorescent reading-out of a series of lectin-glycome interactions on the basis of recognition selectivity and affinity of immobilized lectins without tedious washing processes. Moreover, a simple profiling process was performed using this assay for diverse glycoconjugates, which not only included simple saccharides but also glycoproteins and glycome in cell lysates. These results clearly indicate that the combination of magnetic beads with the novel emitter-quencher pair enabled the highly sensitive detection of lectin-glycome interactions.
Keywords:
fluorescence; lectin; magnetic particles; optical sensors

The glycome, which is the repertoire of glycans, such as oligosaccharides, glycolipids, and glycoproteins, produced by individual biological systems such as cells, tissues, and organisms, has been widely studied to modulate numerous physiological and pathological states [1,2]. Glycosylation is an important posttranslational modification of proteins that profoundly affects various chemical and biological processes such as apoptosis, angiogenesis, and microbial recognition [3,4,5]. Glycosylation on cell surfaces is essential for biological processes, which include growth and adhesion of living cells, immune responses, and the maintenance of diverse living systems. Several studies have indicated that disorders in biological processes contribute to several diseases such as diabetes and cancers [6,7,8,9,10,11]. Moreover, cancer-related structural modifications of glycans, such as sialylation, fucosylation, and polylactosamine elongation, are caused due to cellular perniciousness transformation [12,13,14,15]. Presently, mining of the glycome for cancer-associated biomarkers represents a new paradigm for cancer diagnosis and prognosis, and the detection of glycoconjugates as biomarkers of biological events is not only important for the advancement of basic scientific research but also for diagnostic applications. Additionally, model systems such as self-assembled monolayers and gold glyconanoparticles have been widely used to study carbohydrate-protein binding events [16,17,18]. However, the detection limits of previous assays are poor, and more sensitive analytical systems are needed for the detection of carbohydrate-protein interactions due to the inherent diversity, complexity, and heterogeneity of glycan structures that make glycome analysis particularly challenging.
Recently, optical biosensors based on nanomaterials have been designed and synthesized for the analysis of various biological substances based on fluorescence spectroscopic methods [19,20,21,22]. To improve the performance of sensors, fluorescent materials that exhibit a spectral response upon binding to chemical and biological substances need to be developed. This concept generally produces a high-throughput, highly sensitive, and selective analysis of target molecules.
I previously developed fluorescent sensors for the detection of various saccharides based on lectin-saccharide interactions using fluorescent magnetic beads [23]. Lectins are proteins, and bind to specific glycome. Magnetic beads are widely used for the biological study from the view point of quick and easy separation to produce low background, high purity and high sensitivity results [24,25]. To take advantage of the merits of lectins and magnetic beads, fluorescent analysis of the glycomes was performed with the use of a FRET-based sensing system. However, the photostability of the sensing system is poor due to the poor lifespan of dansyl moiety immobilized on magnetic beads, and the fluorescence intensities are dependent on pH, which may lead to incorrect results and does not allow the detection of physiological levels of target glycome in long-term measurements.
Therefore, I conducted this study to develop an improved method for glycome detection that utilizes the properties of nanometer-sized fluorescent magnetic beads, whose surfaces were modified using lectins via avidin-biotin interactions (FMB-Lectin), as shown in Figure 1a. Cy3 fluorophore was used as the fluorescent emitter, and cyanopyranyl group was used as the fluorescent quencher in the sensing system. Fluorophores (Cy3) were incorporated into magnetic beads, which were surrounded by poly-glycidyl methacrylate and prevented the influence of solution pH on the fluorescence intensity of FMB-Lectin. In contrast, the cyanopyranyl group, which is a fluorescent quencher of Cy3, was introduced into the glycome via covalent bonding under mild and rapid reaction conditions (Quen-Glycan). The lectin-glycoconjugate interactions between molecules in a homogenous solution system were investigated based on the fluorescence quenching efficiency of Cy3 in FMB-Lectin, and the cyanopyranyl group of glycome as used for glycome detection based on the decreased fluorescence-changing activity of the two compounds. I investigated the specificity, sensitivity, stability, reusability, and glycome detection capability of this improved glycome assay in human cell lysates. The experimental results clearly indicated that this assay may be widely applicable for the detection of lectin-glycome interactions, and it may enable long-term longitudinal measurements of the glycome at physiological levels. This supports the administration of precise doses of therapeutic glycome for several important human diseases as well as the accurate monitoring of glycome levels.

(E)-2-(2-(4-(2-(2,5-dioxopyrrolidin-1-yl)-2-oxoethoxy)styryl)-6-methyl-4H-pyran-4-ylidene)malononitrile (Quen-1) was labeled to glycoproteins as follows: The activated-esterized compound Quen-1 was dissolved in 50 μL dimethylsulfoxide and the mixture was added to 500 μL of PBS buffer (pH 7.4) in the presence of 1.0 mg glycoprotein. The reaction mixture was stirred at 4 °C for 12 h, and it was purified via gel permeation chromatography (eluent: PBS buffer). Based on the UV-VIS spectra, the first fraction, which was yellow in color, was identified as a glycoprotein modified using Quen-1.

2.5. Release of Glycoproteins from Fluorescent Magnetic Beads by the Addition of Carbohydrate Inhibitors

The activated-esterized compound Quen-1 was dissolved in 50 μL dimethylsulfoxide and the mixture was added to 50 μL of cell lysates. The reaction mixture was stirred at 4 °C for 12 h, and was used for the measurement using lectin-modified fluorescent magnetic beads without further purification.

In conclusion, fluorescent magnetic beads containing lectins were synthesized, and lectin-saccharide and lectin-glycoprotein interactions were detected with the use of “on-off”-based sensing systems. Moreover, the sensing system could fluorescently respond to the types and concentrations of sugars or glycoproteins using a high-throughput and convenient sensing of various saccharide derivatives. The present lectin beads are very promising for many objectives, particularly for the throughput analysis of all glycoconjugates in cell lines and organisms. Future studies will focus on investigating possible indicators for the detection of glycome and other biological substances in combination with various analytical methods.

Conceptualization, Methodology, Validation, Visualization, Writing original draft, re-view & editing: Y.S. The author has read and agreed to the published version of the manuscript.

This research was funded by projects for “utilizing glycans” in the development of innovative drug discovery technologies (Grant No. 16809263) from the Japan Agency for Medical Research and Development (AMED).

Data presented in this study are available on request due from the corresponding author. The data are not publicly available due to privacy.

I am grateful to Atsushi Kuno for his helpful discussions. 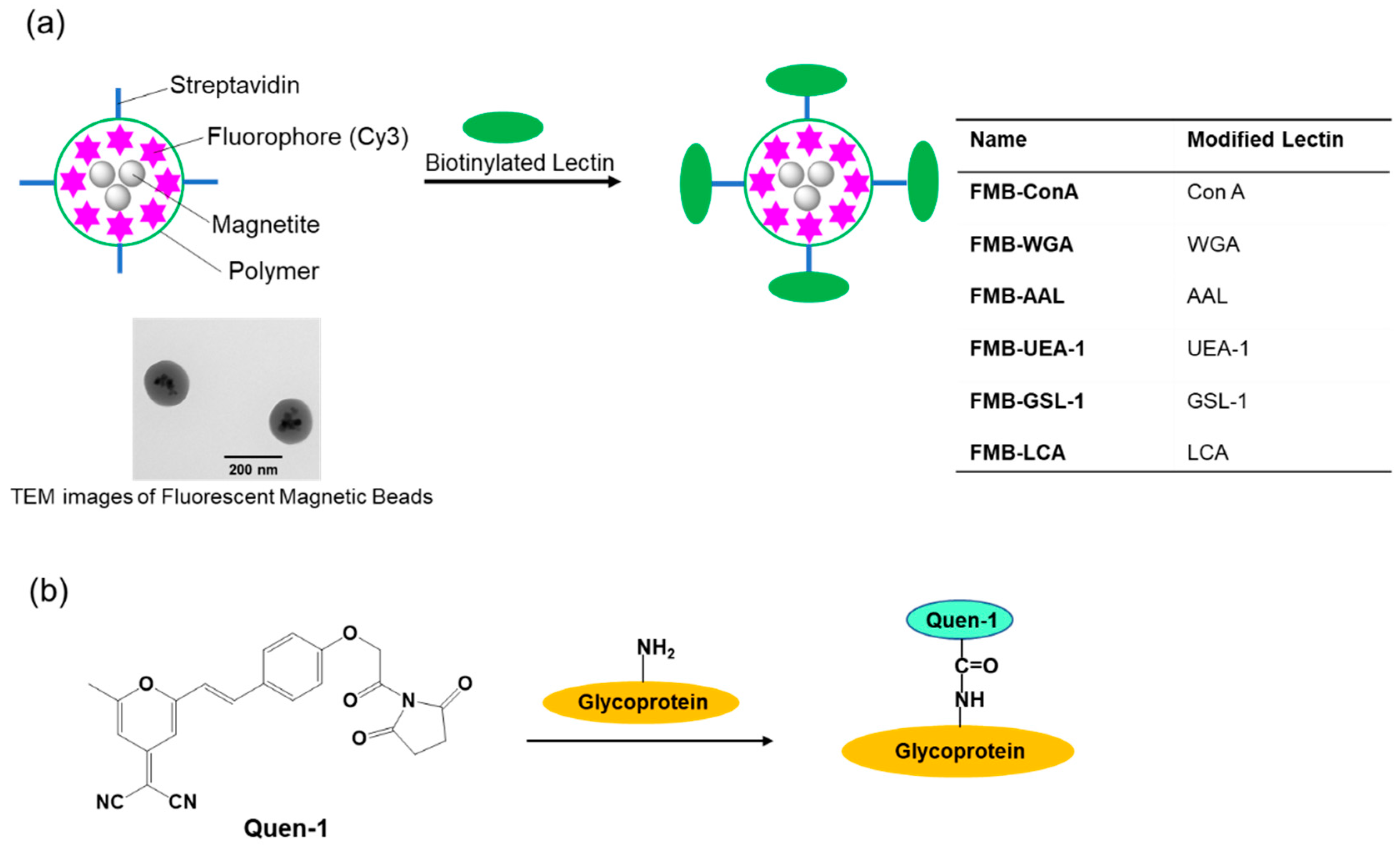 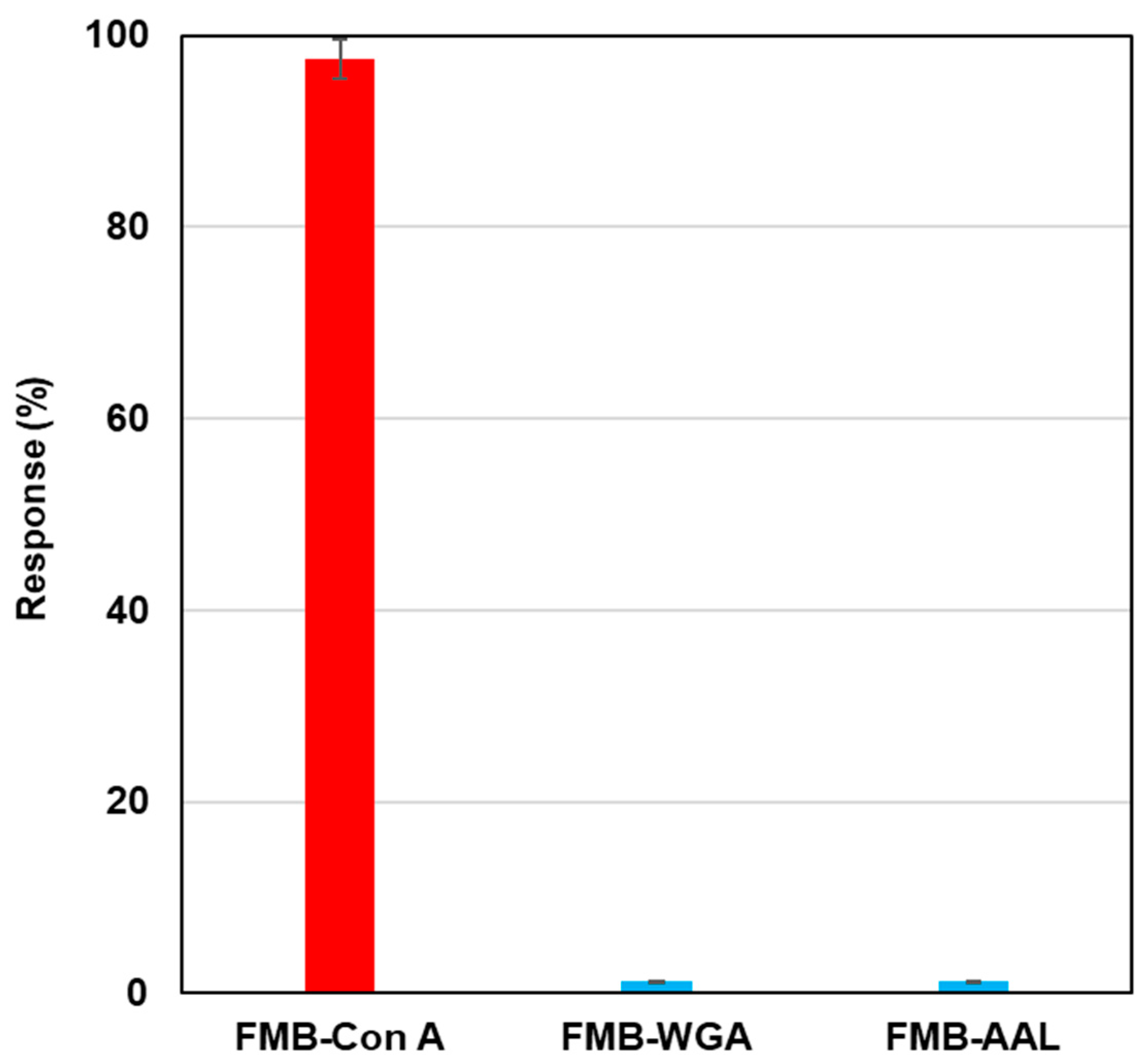 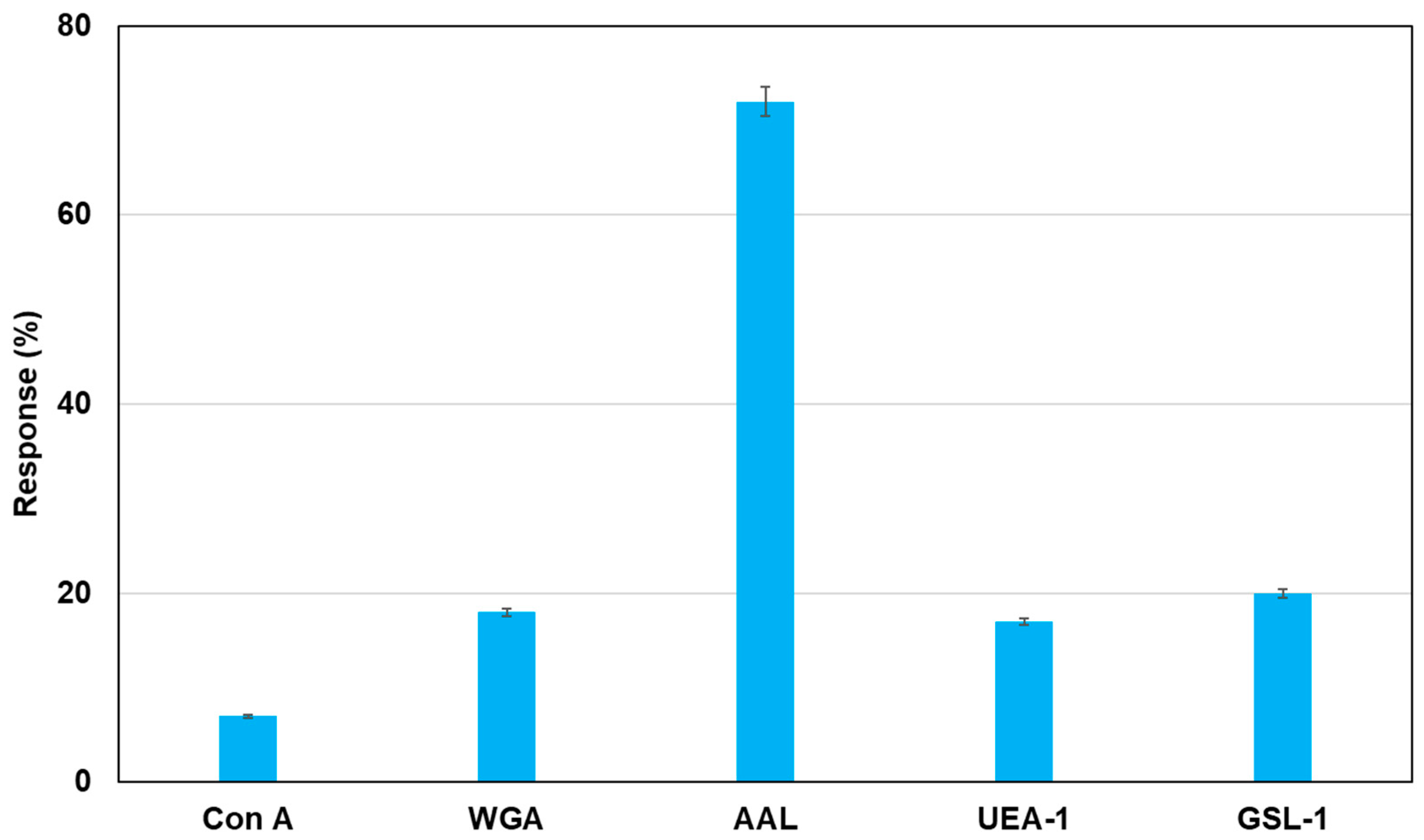