Neural Network for Metal Detection Based on Magnetic Impedance Sensor

Hankz-Hankui Zhuo
*
School of Computer Science and Engineering, Sun Yat-sen University, Guangzhou 510006, China
*
Author to whom correspondence should be addressed.
†
These authors contributed equally to this work and should be regarded as co-first authors.
Academic Editors: Abdeldjalil Ouahabi, Amir Benzaoui and Sébastien Jacques
Sensors 2021, 21(13), 4552; https://doi.org/10.3390/s21134552
Received: 14 May 2021 / Revised: 25 June 2021 / Accepted: 26 June 2021 / Published: 2 July 2021
(This article belongs to the Special Issue Machine and Deep Learning in Sensing and Imaging: Emerging Trends, Challenges and Opportunities)

Synthesizing plans for a deformable object to transit from initial observations to goal observations, both of which are represented by high-dimensional data (namely “raw” data), is challenging due to the difficulty of learning abstract state representations of raw data and transition models of continuous states and continuous actions. Even though there have been some approaches making remarkable progress regarding the planning problem, they often neglect actions between observations and are unable to generate action sequences from initial observations to goal observations. In this paper, we propose a novel algorithm framework, namely AGN. We first learn a state-abstractor model to abstract states from raw observations, a state-generator model to generate raw observations from states, a heuristic model to predict actions to be executed in current states, and a transition model to transform current states to next states after executing specific actions. After that, we directly generate plans for a deformable object by performing the four models. We evaluate our approach in continuous domains and show that our approach is effective with comparison to state-of-the-art algorithms. View Full-Text
Keywords: AI planning; contrastive learning; action model AI planning; contrastive learning; action model
►▼ Show Figures 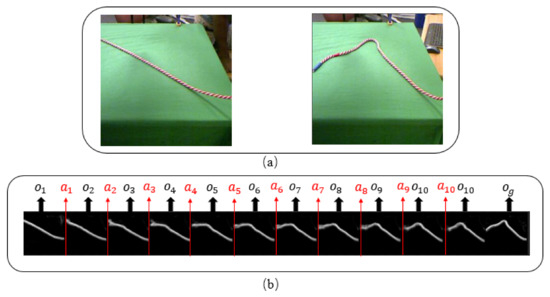