Simulations of Switchback, Fragmentation and Sunspot Pair in δ-Sunspots during Magnetic Flux Emergence

In the contrary to surface oil slicks, dispersed oil pollution is not yet detected or monitored on regular basis. The possible range of changes of the local optical properties of seawater caused by the occurrence of dispersed oil, as well as the dependencies of changes on various physical and environmental factors, can be estimated using simulation techniques. Two models were combined to examine the influence of oceanic water type on the visibility of dispersed oil: the Monte Carlo radiative transfer model and the Lorenz–Mie model for spherical oil droplets suspended in seawater. Remote sensing reflectance, Rrs, was compared for natural ocean water models representing oligotrophic, mesotrophic and eutrophic environments (characterized by chlorophyll-a concentrations of 0.1, 1 and 10 mg/m3, respectively) and polluted by three different kinds of oils: biodiesel, lubricant oil and crude oil. We found out that dispersed oil usually increases Rrs values for all types of seawater, with the highest effect for the oligotrophic ocean. In the clearest studied waters, the absolute values of Rrs increased 2–6 times after simulated dispersed oil pollution, while Rrs band ratios routinely applied in bio-optical models decreased up to 80%. The color index, CI, was nearly double reduced by dispersed biodiesel BD and lubricant oil CL, but more than doubled by crude oil FL. View Full-Text
Keywords: radiative transfer; oil pollution; dispersed oil detection; remote sensing reflectance; chlorophyll-a; color index radiative transfer; oil pollution; dispersed oil detection; remote sensing reflectance; chlorophyll-a; color index
►▼ Show Figures 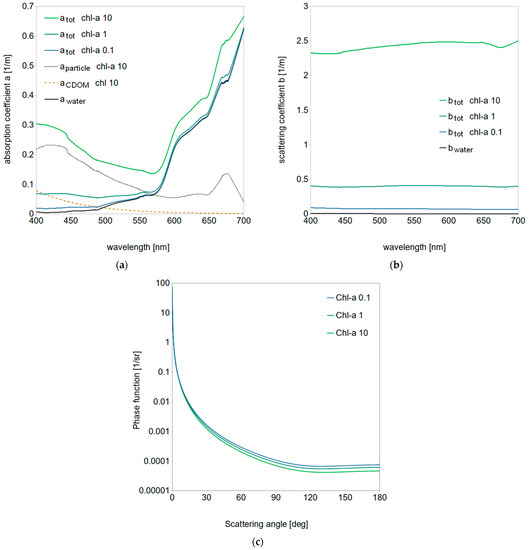