Consider a relay aided cognitive network where a secondary source user establishes a link with a secondary destination user via a secondary AF relay station . Unlike [17], where the direct path from to is ignored, we consider a more general scenario with a direct path. The primary network consists of a pair of primary source user and primary destination user . The secondary users share the whole spectrum with the primary users in underlay mode. Assume that the spectrum is divided into N subcarriers in OFDM mode. Denote the channel coefficients from to and to over subcarrier i as and , respectively. Similarly, the channel coefficient from to over subcarrier j is represented by . The subcarrier pairing technique is applied here. Subcarrier i of the received signal and subcarrier j of the forwarded signal form a subcarrier pair . Then, and denote the interference channel coefficients of link and link, respectively. It is well known that interference is mutual. The equivalent channel coefficients from to and from to are denoted by and , respectively.
The transmission powers at and are given by and , respectively. Similarly, the transmission power at is denoted by . The data rate of the secondary user over the subcarrier pair is given by where and is noise variance. The approximation in Equation (1) has been widely applied, such as [17].

Although joint optimization of physical layer, medium layer, and application layer can achieve better performance [23], the successful establishment of communication depends first on the connection of the physical layer. Hence, this section focuses on the optimization of the physical layer. In this section, we prepare to seek for the maximum value of the sum rate of the secondary network subject to the available power budget and the tolerable interference threshold at the primary user. This problem is formulated by where , , is the total power budget at the secondary network, and denote the tolerable interference threshold that can maintain at the first phase and the second phase, respectively. is a binary variable indicating whether the subcarrier pairing is successful. If subcarrier pairing is formed, then ; otherwise, . Although our problem is a mixed integer programming problem due to the existence of discrete variables, the dual gap is asymptotically zero according to the time sharing property of OFDM [24].

By substituting the optimal power allocation into Equation (4), the dual function becomes where is given by when and hold; when and hold; and when holds. By comparing the two Equations (14) and (15), it is not difficult to find that as long as x > y is satisfied, the value of the relaying link is greater than that of the direct link. This again proves that the selection criteria are correct. Now, only the subcarrier pairing variables are left. Obviously, the problem (13) is a typical linear assignment problem, which has been solved in [26]. Finally, dual variables have to be searched iteratively to satisfy the power and interference threshold constraints.

If and suffer from separate power constraints, then the sum rate maximization problem is formulated by where and are the peak power budgets at and , respectively.

Similarly, the Lagrangian function of Equation (16) is constructed as
According to the KKT rule, taking the partial derivative of L with respect to and , we get
After some algebraic operations, the optimal power allocation is given by where
In the separate power constraints, the decision criterion for whether to relay becomes . If the condition holds, prefers to communicate with via the help of the relay station . Otherwise, direct transmission is more beneficial. Next, let’s look at an interesting special case. When there is only one subcarrier, the optimal power allocation is given by and .

Substituting the power variables into the L, we get where is given by when and hold; when and hold; and when holds. Similarly, the problem (23) is a typical linear assignment problem, which has been solved in [26]. Finally, dual variables have to be searched iteratively to satisfy the power and interference threshold constraints.

Simulation results are provided in this section to prove our proposed optimization algorithm. Assume six tap channels taken from COST207 model for all links [27]. We define the average SNR as . Furthermore, the transmission signal to noise ratio (SNR) of the primary user is assumed to be dB, . In addition, the number of subcarriers are set to be . For simplicity, and share the same peak power . We consider a common simulation layout, where the source, the relay, and the destination are deployed in a straight line and the relay is deployed at the midpoint unless otherwise specified. The path loss exponent is assumed 3.
Figure 1 compares the performance of our proposed algorithm with that of Musbah’s method [16] and Guftaar’s method [17], where normal means that all channel gains are normalized to unit one, while strong means that the channel quality of the direct link is 10 dB higher than that of the relaying link. It can be seen from Figure 1 that, when the channel quality of the direct link is good, the rate of Musbah’s exceeds that of Guftaar’s. Conversely, when the channel quality of direct link deteriorates, the rate of Musbah’s method drops sharply and is lower than that of Guftaar’s. This phenomenon fully shows that Musbah’s method focuses on the direct link instead of the relaying link, while Guftaar’s focuses on the relaying link instead of the direct link. However, our proposed algorithm outperforms the other two approaches in the same environment because we can adaptively access the two links according to the decision criteria:
Next, we prepare to compare the performance of the following suboptimal algorithms. (1) Fixed subcarrier: The subcarriers received and forwarded by the relay are the same, i.e., for and otherwise. This method is equivalent to power allocation without subcarrier pairing in case with the proposed algorithm; (2) Equal power: Equal power is distributed across all subcarriers at secondary users. Specifically, the powers have to be respectively adjusted as and under total power constraint and and under separate power constraints due to the interference condition of the primary user. (4) Fixed subcarrier and equal power (FSEP): The subcarrier pairing is fixed as in case (1) and power is evenly distributed as in case (2).
The impact of the average SNR on the sum rate is showed in Figure 2. We observe that the joint algorithm exhibits a substantial increase in promoting the sum rate of the secondary users at all SNR values. For example, at a target rate 1 bps/Hz, the optimal algorithm can save about 2 dB SNR in contrast to a fixed subcarrier case. Even the equal power case and FSEP case can not reach this target rate in this simulation experiment. Moreover, by comparing fixed subcarrier case and equal power case, we find that the power allocation is more efficient than subcarrier pairing in the aspect of sum rate promotion. Part of the fact is that, in the equal power scheme, the subcarrier pairing is not optimal due to the existence of interference constraints.
Next, the effect of the interference constraint level on the sum rate is plotted in Figure 3, where . The higher the level of interference the primary user can tolerate, the higher the transmission rate of the secondary user is because more power can be consumed by the secondary user as long as the interference to the primary user is lower than the threshold value. Obviously, when the interference level is relatively low, the sum rate of the secondary user is dominated by strict protection criteria imposed by the primary user. In this case, the secondary user does not use the full transmission power. When the interference level is high, the sum rate of the secondary user is governed by the total power budget. In this case, the interference caused by the secondary user to the primary user does not reach the maximum tolerable interference level. Thus, in the high interference threshold regime, the sum rate remains unchanged. In fact, at a low interference level, the power constraint is inactive while at a high interference level, the interference constraint condition is inactive.
Then, the impact of relay position on the sum rate is drawn in Figure 4, where the relay moves between the source and destination. The key observation is that the relay prefers to stay at midway. This phenomenon shows that the relay can effectively help the source node in data transmission, especially in the scenario where the destination node is far from the source node.
The influence of the average interference SNR of the primary user on the sum rate of the secondary user is illustrated in Figure 5. The transmission power of the primary user is an interference from the perspective of the secondary user. Thus, the sum rate decreases when the primary user increases its transmission power.
Finally, the impact of the power ratio on the sum rate is described in Figure 6, where is always maintained to ensure fairness under the separate power constraint. When and are subject to the total power constraint, they can adaptively adjust to find the optimal power allocation scheme. Thus, the sum rate of the total power case, which can be regarded as the upper bound of separate power case, always keeps flat in all ratios. Moreover, from a separate case, more power should be provided to the source node because sometimes the relay may turn off its transceiver when direct link is more efficient than relaying link.

This paper has studied resource allocation problems in AF cognitive relaying OFDM networks. Two typical problems are fully investigated. One is the sum rate maximization of the secondary user under a total power constraint and the other is subject to individual power constraints. The rate performance of the secondary user is different from that of the traditional cooperative networks due to the interference constraints of the primary user. The simulation results show that the secondary user’s rate suffers a significant loss even with a large power budget when the interference threshold is relatively low. In future, we will consider precoding and cross layer optimization issues in cognitive relay networks. 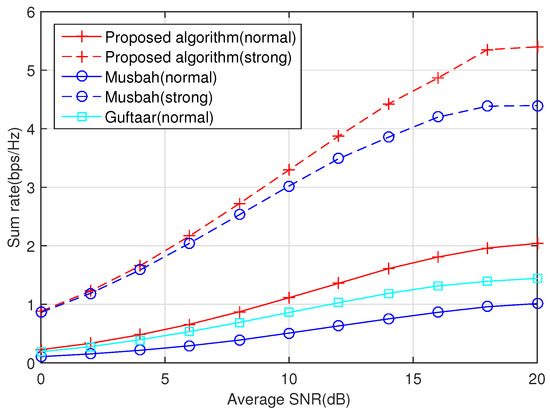 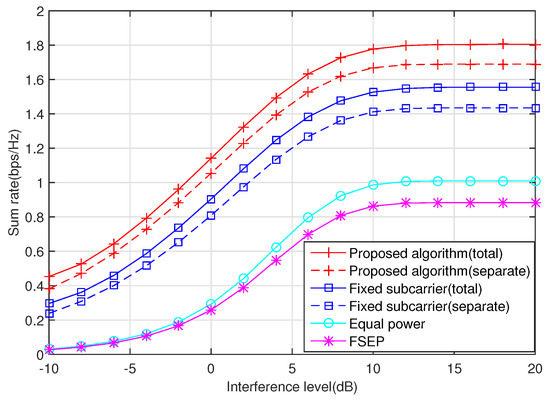 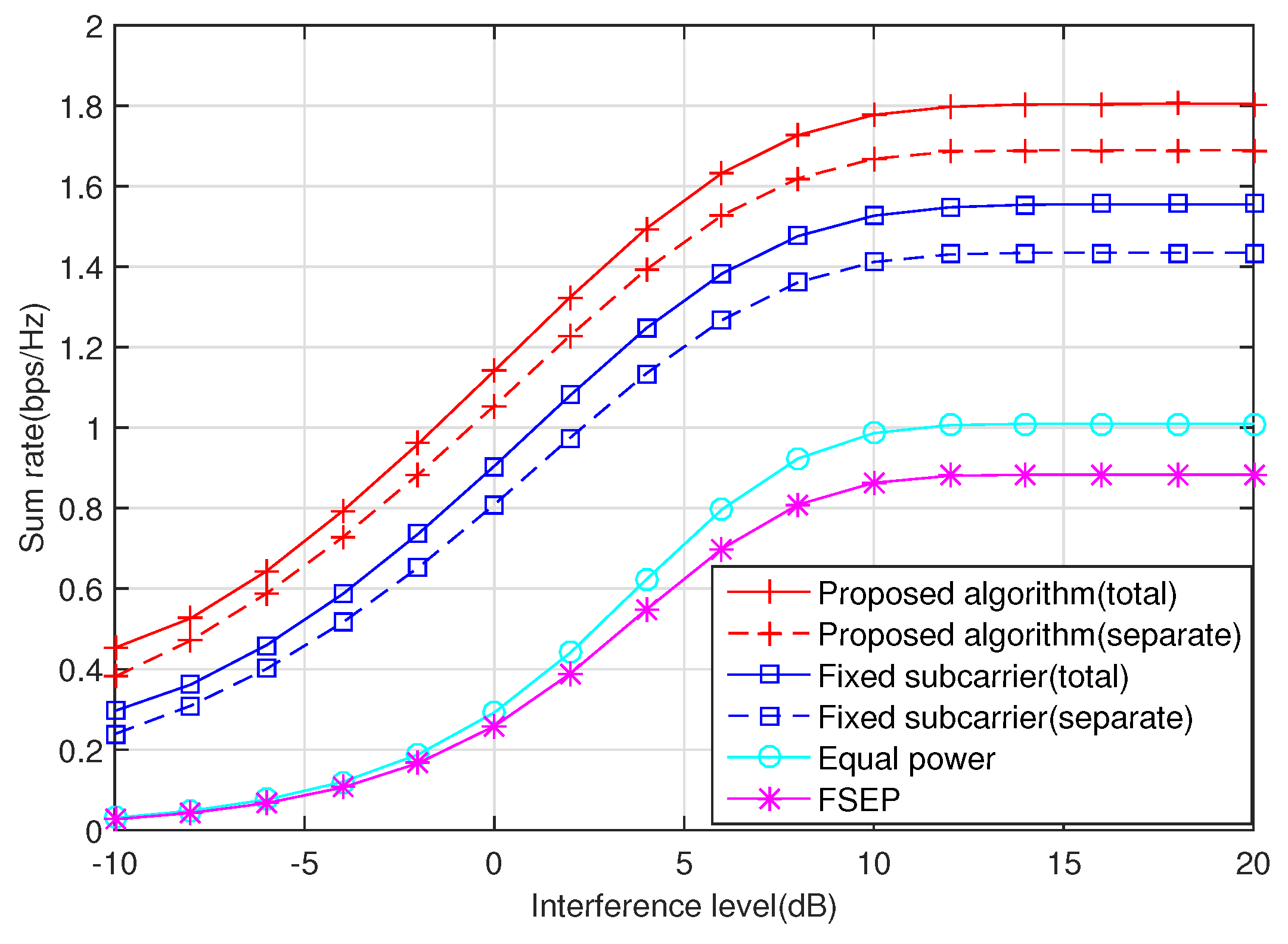 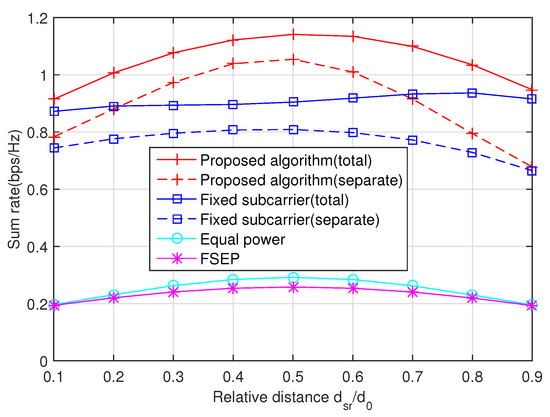 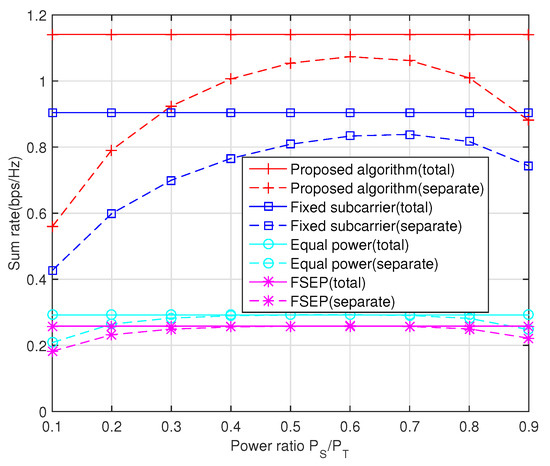 Table 1. A comparison of different works.
Table 1. A comparison of different works.
© 2020 by the authors. Licensee MDPI, Basel, Switzerland. This article is an open access article distributed under the terms and conditions of the Creative Commons Attribution (CC BY) license (http://creativecommons.org/licenses/by/4.0/).
We use cookies on our website to ensure you get the best experience. Read more about our cookies here.
Accept
We have just recently launched a new version of our website. Help us to further improve by taking part in this short 5 minute survey here. here.
Never show this again