:
In order to improve the performance of surface plasmon resonance (SPR) biosensor, the structure based on two-dimensional (2D) of graphene and transition metal dichalcogenides (TMDCs) are proposed to greatly enhance the Goos-Hänchen (GH) shift. It is theoretically proved that GH shift can be significantly enhanced in SPR structure coated with gold (Au)-indium tin oxide (ITO)-TMDCs-graphene heterostructure. In order to realize high GH shifts, the number of TMDCs and graphene layer are optimized. The highest GH shift (−801.7 λ) is obtained by Au-ITO-MoSe2-graphene hybrid structure with MoSe2 monolayer and graphene bilayer, respectively. By analyzing the GH variation, the index sensitivity of such configuration can reach as high as 8.02 × 105 λ/RIU, which is 293.24 times of the Au-ITO structure and 177.43 times of the Au-ITO-graphene structure. The proposed SPR biosensor can be widely used in the precision metrology and optical sensing.
Keywords:
surface plasmon resonance; Goos-Hänchen shifts; transition metal dichalcogenides; graphene; sensitivity

Surface plasmon resonance (SPR) is a kind of highly sensitive real-time spectral phenomenon, which can be used to measure the refractive index change on the surface of the metal film [1]. The optical biosensor based on SPR technology has many advantages, such as high sensitivity, real-time monitoring of the dynamic process of the reaction, label the biological sample, and no background interference [2,3,4]. In the past few years, SPR-based biosensors have developed rapidly in environmental monitoring, medical diagnosis, food safety detection, and so on [5,6,7]. Many researchers use new materials [8,9] and optimized structures [10,11] to improve the performance of SPR biosensors.
As we know, when total reflection occurs at the interface of two kinds of media, a small lateral displacement occurs between the incident light and the reflected light, which is called the Goos-Hänchen (GH) shift [12,13]. Artmann gives a theoretical explanation of the effect of GH shift based on the stationary phase method [14]. In the past year, GH shift has applied to optical measurement [15], chemical sensors [16], and other important fields [17]. Researchers are using various methods to enhance GH shift, one of which is to excite surface plasmon polaritons (SPPs). SPPs are a special physical phenomenon, which occurs in the coupling of electromagnetic wave and charge excitation at the metal dielectric interface. In attenuated total reflection (ATR) structure, when the wave vector of the incident light from the high refractive index prism is matched with the one of the SPPs, SPR can be excited, and the electromagnetic field near the metal medium interface will become very strong, resulting in a huge GH shift [18]. In the traditional ATR structure, gold (Au), silver (Ag), copper (Cu), and aluminum (Al) are usually deployed for SPPs. When guided wave SPPs are excited, the maximum GH shift can reach hundreds of wavelengths under the optimal thickness of Ag film [19].
Indium tin oxide (ITO) is a new kind of semiconductor material [20]. Pass through doping Sn in In2O3 (commonly used doping ratio is: In2O3:SnO2 = 9:1), and substituting Sn4+ atom for in3+ atom, it has the characteristics of high band gap and degeneracy [21]. It is composed of two kinds of metal oxides, therefore ITO has unique properties, such as good conductivity, corrosion resistance, high transmittance, and is widely used in optical sensing [22,23,24,25]. In addition, two dimensional (2D) nanomaterials have attracted more attention due to their excellent properties, such as graphene [26,27], transition metal dichalcogenides (TMDCs) [28,29], black phosphorus (BP) [30,31], and so on. The 2D materials have the following advantages: firstly, high surface volume ratio and adjustable biocompatibility help to improve the sensitivity of biosensors [32]; secondly, the high dielectric constant of the real part can better help the metal absorb light energy [33]; finally, these materials can be coated on the metal film to protect the metal from oxidation as a protective layer [34,35]. Graphene with high electron mobility, high specific surface area and adjustable bandgap has received special attention [36]. However, the reason for limiting the development of graphene in the field of optics is that the intrinsic optical response of graphene is usually very low [37]. Therefore, this leads to the emergence of hybrid or composite structures containing graphene, which can enhance the multiplier or gain of carriers by generating multiple charge carriers with a single photon. The imaginary part of the conductivity of graphene is closely related to the magnitude and sign of GH shift when the substrate refractive index is constant [38]. The harmonic enhancement of the GH shift of TM polarized reflection beam in graphene hyperbolic material, and proved that there can be thousands of negative transverse shifts near Brewster angle. The lateral shift can be adjusted by Fermi energy [39,40]. Wu et al. proved from theoretically how to adjust the local strain in graphene to generate valley-polarized current, and found that the electrons in opposite valleys show different Brewster angles and GH shift, which are closely similar to the propagation behavior of light [41]. Compared with graphene, the most remarkable feature of semiconductor materials in TMDCs family is the adjustable band gap and the photoelectric properties can be changed by adjusting the number of layers of TMDCs. Das et al. researched the GH shifts of fundamental Gaussian beams on the surfaces of monolayer MoS2, TMDCs, and direct band gap semiconductor in detail [42]. The spin-valley transport and GH effect of the transmitted and reflected electrons in the gated monolayer WS2 are considered [43]. In the SPR structure coated with graphene and MoS2 heterojunction, the GH shift is significantly enhanced to 235.8 λ [18].
Although TMDCs and graphene are recognized as promising approaches to enhance the GH shift, there is no comparative analysis of various TMDCs (WS2/MoS2/MoSe2/WSe2) and graphene on GH shift in current literatures. Moreover, the combination effects of metal and ITO on GH shift has yet been reported, while in this paper, the GH shifts of TMDCs and graphene are compared, and the maximum GH shift is 801.7 λ for Au-ITO-MoSe2-graphene heterostructure. The optimum sensitivity based on GH shift is 8.02 × 105 λ/RIU, which is 293.24 times of Au-ITO structure and 177.43 times of Au-ITO-graphene structure. These results will provide a helpful guidance for the scholars who study 2D-materials-based GH shift.

The Kretschmann structure with Au-ITO-TMDCs-graphene hybrid structure is shown in Figure 1. The SPR structure consists seven layers, the incident light is P-polarized, and the excitation light wavelength λ = 632.8 nm is applied. The reflected P-polarized light is collected and analyzed by the photodetector and the angle of incidence is θ. The SF11 glass is adopted as the prism because of its high refractive index [44]. The Au thin film coated BK7 glass slide is attached to the base of an equilateral prism made of high refractive index glass through index matching fluid [45].
For the first layer, the SF11 glass with refractive index is obtained as following relation [45]: where λ is the wavelength of incident light in um. The second layer is BK7 glass with the refractive index as following [45]:
According to the Drude–Lorentz mode, the third layer is the Au film with refractive index as following [46]:
The fourth layer is the ITO film with refractive index as [29]:
The fifth layer of TMDCs with the refractive index and thickness of monolayer at λ = 632.8 nm is shown in Table 1 [47,48].
In the sixth layer, the refractive index of graphene at visible range is obtained by the relation [49]: where the constant C1 ≈ 5.446 μm−1. The thickness of monolayer of graphene is 0.34 nm. For the last layer, the sensing medium is water. In the λ = 632.8 nm, the refractive indices are n1 = 1.7786, n2 = 1.5151, n3 = 0.181 + 3.068i, n4 = 1.858 + 0.058i, n6 = 3.000 + 1.149i, n7 = 1.330 [50], respectively. The change of the refractive index of the sensing medium caused by the adsorption of biomolecules on the surface of graphene is characterized by △nbio. The dielectric constant of each layer is set to εk (k = 1,2,...,7). The thickness (dk) of SF11 glass, BK7 glass, and sensing medium are d1 = 200 nm, d2 = 100 nm, and d7 =100 nm, respectively. For this SPR biosensor, we use the thickness of Au (d3) 50 nm and ITO (d4) 10 nm to excite the SPR. It is reasonable to take the individual graphene sheet as a non-interacting monolayer if the number of layers N ≤ 5 [51]. Therefore, in this article, we discuss graphene layers and TMDCs less than or equal to 5.
In order to study the changes of the GH shift and reflectivity in SPR biosensors, we use the transfer matrix method (TMM) and the Fresnel equation based on N-layer model to perform a detailed analysis. The M is the characteristic TM of n-layer composite structure, which is obtained from the following relation of P-polarized light [45]: where Mk is expresses as: where pk and αk are written as: where, dk is the thickness of the kth layer. The matrix of the total reflection polarized light (γp) can be expressed as [18]: where p1 and pN are the corresponding terms for the first layer and the Nth layer. The reflectivity (Rp) and phase (ψp) is shown as:
Therefore, the GH shift is obtained by the stationary phase method, and it can be expressed as [14]: where the θ1 is the angle of incidence.

In this paper, the high GH shift in SPR biosensor based on Au-ITO-TMDCs-graphene hybrid structure is analyzed. We theoretically prove the influence of the number of graphene and TMDCs layers on the GH shift, and a large GH shift is obtained by using the mixed structure of monolayer MoSe2 and bilayer of graphene. The maximum displacement is 801.7 times of the incident wavelength. Compared with the traditional SPR structure, the shift of the structure is increased by more than 2 orders of magnitude. Moreover, the GH shift can be positive or negative depending on the layer number of TMDCs and graphene. The sensitivity corresponding to the maximum GH shift can reach as high as 8.02 × 105 λ/RIU, which is 293.24 times of the Au-ITO structure and 177.43 times of the Au-ITO-graphene structure. Such configuration could pave the way to high precision optical sensing. 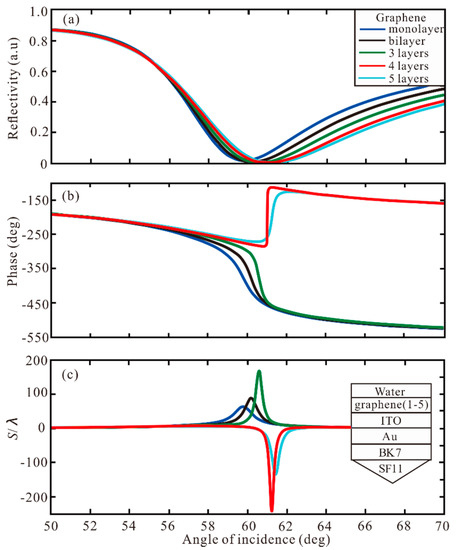 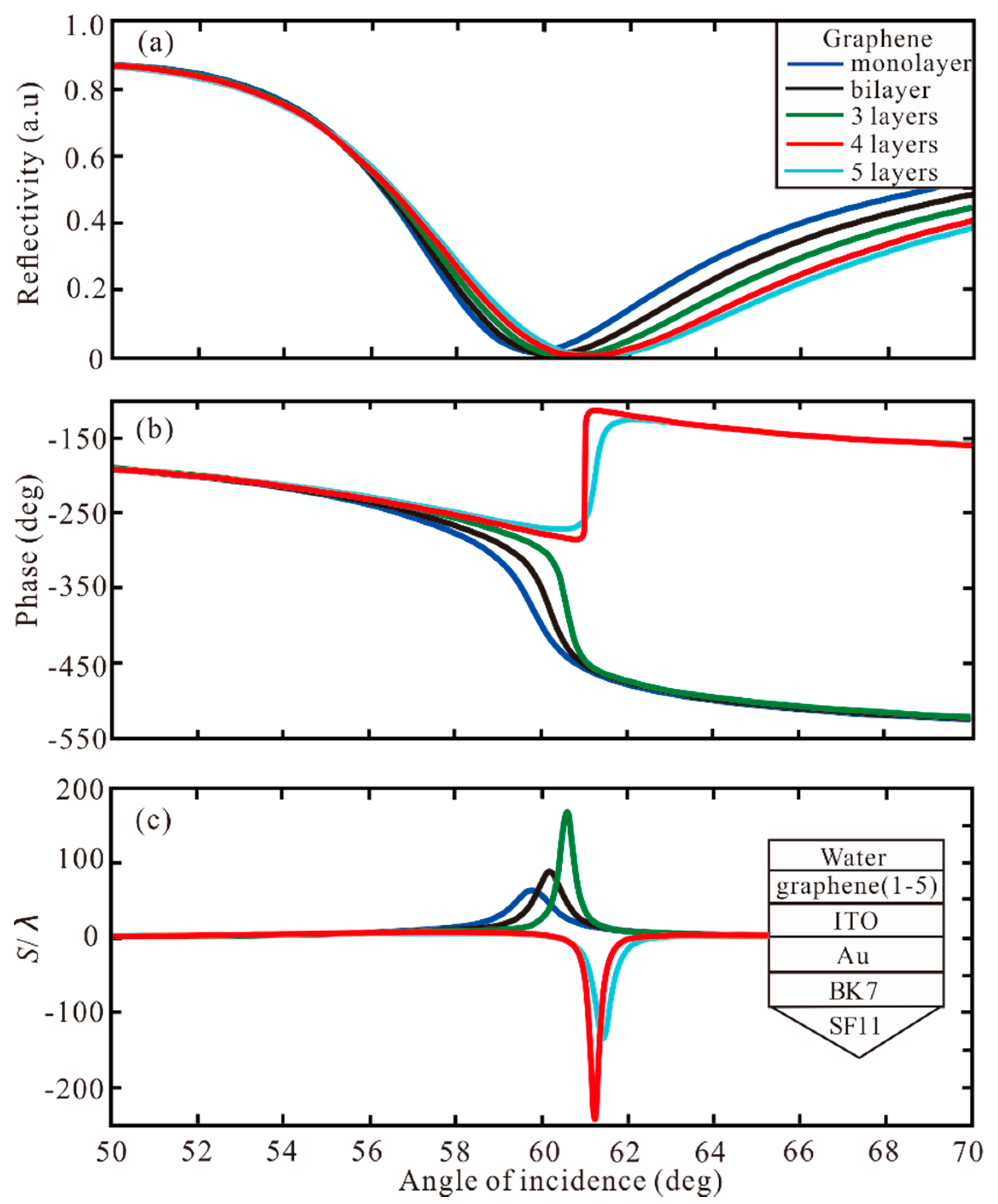 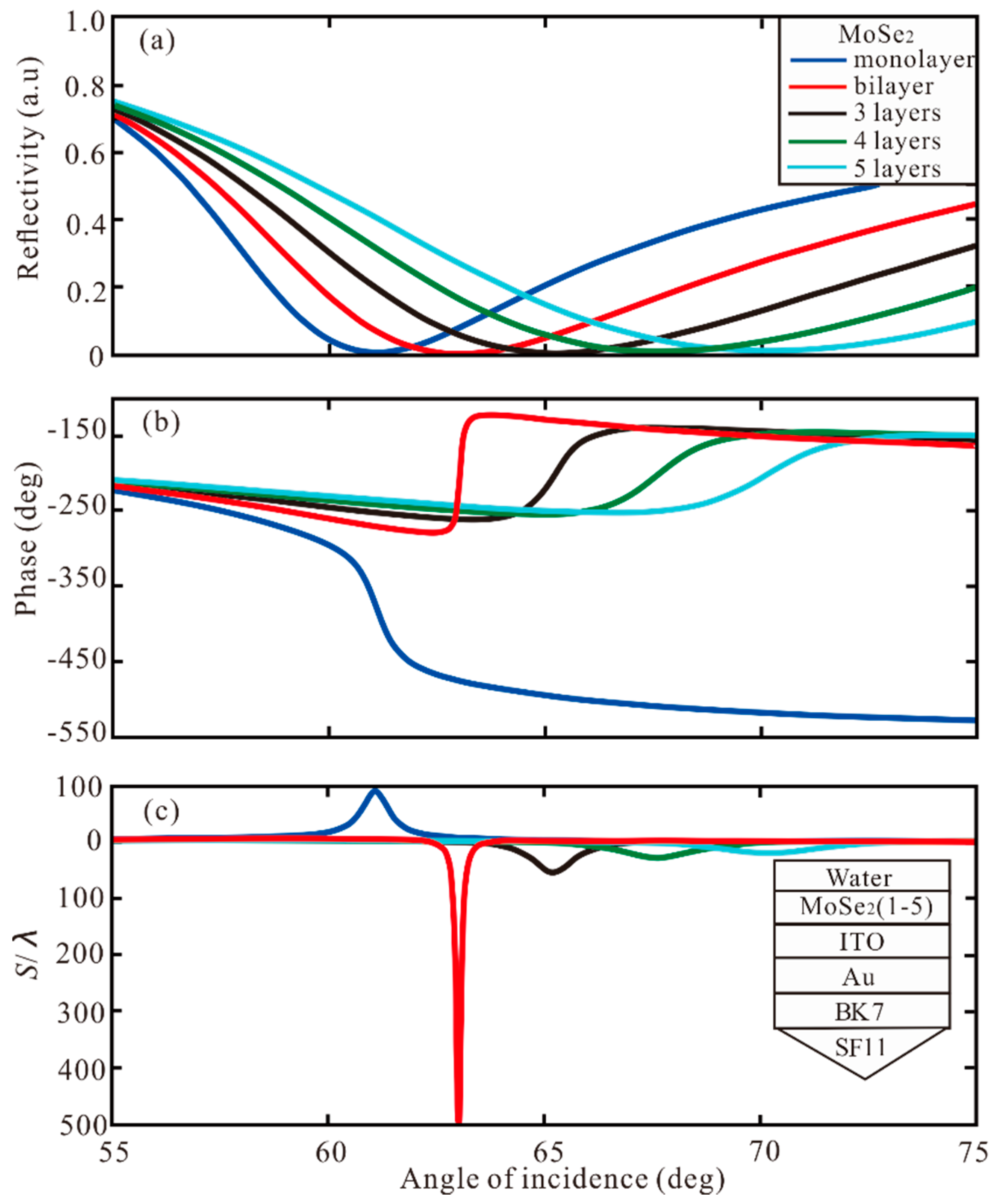 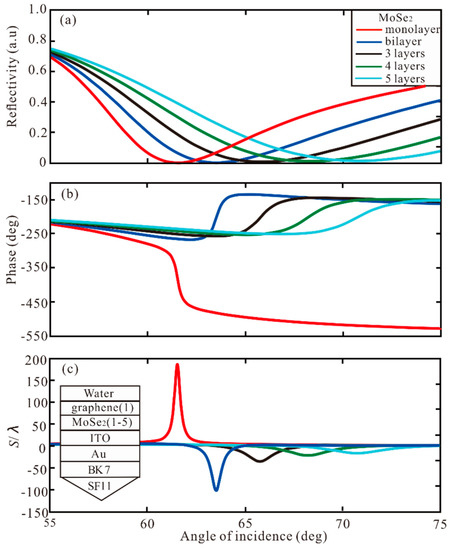 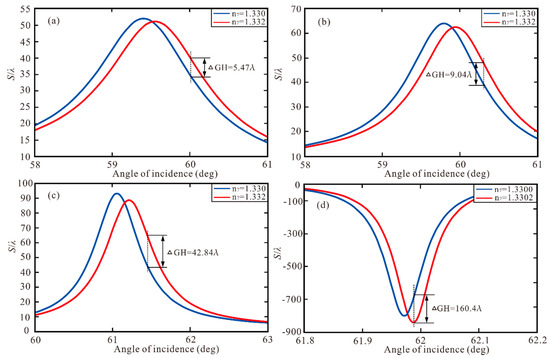