Portable Biosensors for Psychophysiological Stress Monitoring of a Helicopter Crew

This study aims to analyze the psychophysiological stress response of a helicopter crew using portable biosensors, and to analyze the psychophysiological stress response differences of experienced and non-experienced crew members. We analyzed 27 participants (33.89 ± 5.93 years) divided into two different flight maneuvers: a crane rescue maneuver: 15 participants (three control and 12 military) and a low-altitude maneuver: 12 participants (five control and seven military). Anxiety, rating of perceived exertion, subjective perception of stress, heart rate, blood oxygen saturation, skin temperature, blood lactate, cortical arousal, autonomic modulation, leg and hand strength, leg flexibility, spirometry, urine, and short-term memory were analyzed before and after both helicopter flight maneuvers. The maneuvers produced a significant increase in stress and effort perception, state of anxiety, and sympathetic modulation, as well as a significant decrease in heart rate, blood oxygen saturation, leg and inspiratory muscle strength, and urine proteins. The use of biosensors showed how a crane rescue and low-altitude helicopter maneuvers produced an anticipatory anxiety response, showing an increased sympathetic autonomic modulation prior to the maneuvers, which was maintained during the maneuvers in both experienced and non-experienced participants. The crane rescue maneuver produced a higher maximal heart rate and decreased pulmonary capacity and strength than the low-altitude maneuver. The psychophysiological stress response was higher in the experienced than in non-experienced participants, but both presented an anticipatory stress response before the maneuver. View Full-Text
Keywords: stress; experience; military; heart rate variability; anxiety stress; experience; military; heart rate variability; anxiety
►▼ Show Figures 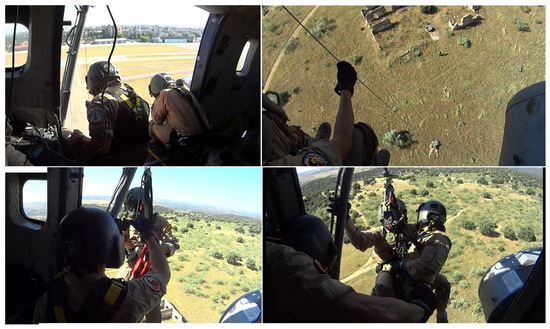