DNAzymes are DNA oligonucleotides that can undergo a specific chemical reaction in the presence of a cofactor. Ribonucleases are a specific form of DNAzymes where a tertiary structure undergoes cleavage at a single ribonuclease site. The cleavage is highly specificity to co-factors, which makes them excellent sensor recognition elements. Monitoring the change in structure upon cleavage has given rise to many sensing strategies; here we present a simple and rapid method of following the reaction using resistive pulse sensors, RPS. To demonstrate this methodology, we present a sensor for Ca2+ ions in solution. A nanoparticle was functionalised with a Ca2+ DNAzyme, and it was possible to follow the cleavage and rearrangement of the DNA as the particles translocate the RPS. The binding of Ca2+ caused a conformation change in the DNAzyme, which was monitored as a change in translocation speed. A 30 min assay produced a linear response for Ca2+ between 1–9 μm, and extending the incubation time to 60 min allowed for a concentration as low as 0.3 μm. We demonstrate that the signal is specific to Ca2+ in the presence of other metal ions, and we can quantify Ca2+ in tap and pond water samples.
Keywords: DNAzyme; aptamer; nanopore; resistive pulse sensor; metal ion sensor DNAzyme; aptamer; nanopore; resistive pulse sensor; metal ion sensor

Calcium (Ca2+) is one of the most abundant metals in the human body, making up to 2%wt of total human body weight, and plays a fundamental role in biological processes including secondary messengers critical for cell signalling, protein folding, and catalysis [1,2,3,4]. It has also been demonstrated that monitoring Ca2+ concentrations is important within the environment. High or very low concentrations within drinking water have been linked to problems with corrosion, scaling, and poor taste [5]. It also represents a hazard due to its high environmental mobility and bioavailability [6]. When unregulated, high concentrations of Ca2+ can cause various diseases such as hypercalcaemia [7] and heart disease, [8] while low levels can lead to deficiencies such as osteoporosis [9] and muscle and nerve tightening [10].
Many different methods have been developed for the detection of Ca2+ ions in solutions. Common methods include atomic absorption spectrometry [11,12], ion chromatography [13,14], and high-performance liquid chromatography [15]. While they are sensitive, e.g., the Limit of detection (LoD) for atomic absorption can be 0.005 μM [12], as well as selective and reliable, they are expensive, labour intensive, and unable to be taken on-site. Fluorometric methods have been widely acknowledged due to their advantageous short response times and high sensitivity; however, they too suffer complex operations, low detection throughput, and can also be problematic to apply on-site [16]. There remains a need for a technology that is relatively inexpensive, has short analysis times, is sensitive, and can be deployed in complex matrices.
An important component for any sensor is the recognition element, and thus, there have been components that have been developed to bind Ca2+ with high specificity that have been integrated into various sensing platforms, such as binding proteins [7,17,18], magnetic nanoparticles [19], and glycosphingolipds [20]. A new category of recognition ligands to heavy metals include DNA aptamers and DNAzymes. DNAzymes are DNA-based catalysts; all known DNAzymes have been selected through in vitro selection [8,21,22]. There are many DNAzymes that require divalent metal ions such as Pb2+ [23,24,25], Zn2+ [26,27], Cu2+ [28,29], and UO22+ [30,31], for activity. DNAzymes have several advantages compared to enzymes commonly used within biosensing: they can easily be grafted onto surfaces, are more stable at ambient conditions, and can amplify detection due to their catalytic nature [32]. DNAzymes have been widely used as they have simple reaction conditions and significant changes in structure [33]. However, they usually require a tag or label to provide an analytical signal [3,34,35]. Resistive pulse sensing (RPS) is a sensing technology capable of probing changes in DNA structure [36,37]. RPS has a broad range of applications including material characterisation [38,39,40,41], quantification of DNA/peptide analyte interactions [42,43], and biosensing [44,45,46]. RPS measures speeds of nanocarriers as they translocate a nanopore, and through changes in nanocarrier speed, they are able to infer carrier binding with target analyte [47,48,49].
The integration of DNAzymes onto nanocarriers presents a new method of analysis, as the cleavage of the DNAzymes could be identified and characterised. RPS has demonstrated the ability to measure speed changes between double and single stranded DNA [36]. There have also been other studies that have utilised DNAzymes with a-hemolysin and solid-state nanopores [50,51,52]. Protein and solid-state nanopores offer the ability to distinguish between the DNAzyme and its cleavage products through changes in blockade signal. However, protein nanopores suffer from issues with stability and low reaction condition tolerance, while solid-state nanopores suffer from low signal-to-noise ratios and required large DNA strands to enable detection. To improve these limitations, carriers can be used to enable separation and preconcentration of samples, enhance the signal, and increase dynamic range and sensitivity of the assay [37,53].
Here, we present the use of a DNAzyme with RPS to detect Ca2+ ions in solution, using RPS’s ability to identify changes in structure. Previous studies have reported the cleavage of the DNAzyme by Ca2+ [3,54,55]; here, we were able to measure and take this further by inferring the rearrangement of the DNAzyme structure post cleavage. The catalytic nature of the DNAzyme allowed for the assay limits of detection to be tuned dependent on incubation times, as well as allowing quantification of Ca2+ when incubation times are kept constant. We were also able to demonstrate our assay is specific to Ca2+ observing no interferences from a mix of divalent ions. Finally, we showed the ability of our assay to be deployed in real environmental samples through the quantification of Ca2+ in both tap and pond water samples.

Two custom DNA oligonucleotides were purchased from Sigma-Aldrich, in lyophilised form, and were purified using reverse-phase cartridge purification by the manufacturer. The two oligonucleotides ordered were: GCCATCTTTTCTCACAGCGTACTCGCTAAGGTTGTTAGTGACTCGTGAC (enzyme strand) and biotin-TCACGAGTCACTATRAGGAAGATGGCGAAA (substrate strand); they were diluted to 100 µM stock solutions using deionised water.

The DNAzyme complex was first formed by heating the substrate strand, 2.5 µL, with the enzyme strand, 5 µL, in 50 mM MES buffer (pH 6 with 25 mM LiCl) with 0.05% TWEEN 20 added, at 70 °C for 2 min followed by cooling. Once cool, streptavidin modified particles were added to the solution and left to bind for 30 min. Once bound, the particles were placed on a MagRack (Life Sciences) until a clear cluster of particles was seen; the buffer was then removed and replaced with 10 mM HEPES, pH 7.6, 50 mM LiCl, and a buffer with 0.05% TWEEN 20 was added.
The concentration of the particles in each assay was 2.5 × 109 particles per mL. The suppliers data sheets give the binding capacity of 5665 pmol of biotin per mg of beads, which we used to calculate how much DNA is 100% coverage. In each assay, the number of particles remained the same and the DNA was always added in excess to ensure complete coverage of the carrier surface. We have shown how the number of the carriers and ligand density can affect the sensitivity in similar assays. This was not the subject of investigation here [37,42,48,53,56].

A qNano (Izon Science Ltd., New Zealand) was used to complete all the measurements for this study. A qNano uses data capturing software (Izon Control Suite v3.3) to record the particles as they traverse the pore. The lower fluid cell contained 80 µL of KCl solution and the upper fluid cell contained 40 µL sample solution. After each measurement was taken, the nanopore was cleaned by first rinsing the upper fluid cell with background buffer before the buffer was removed and replaced multiple times. Each time, a different pressure or vacuum was applied. The nanopore stretch was also varied wider and narrower; this was done until there were not any residual particles observed in the system, ensuring no cross contamination between the samples. The qNano was operated with a positive bias, i.e., the positive electrode in the lower fluid cell and the negative electrode in the upper fluid cell, so the particles traverse the pore towards the positive electrode unless otherwise stated. For all experiments, an NP200 nanopore was used to be able to analyse particles from 85–500 nm. More than 200 particles where measured for each sample, and a typical rate was 250–300 particles per min. To account for any manufacturing variation between pores, the baseline current was kept constant throughout all experiments, and the stretch was slightly changed to ensure this, with a maximum 10% difference in baseline between sample runs. Each pore was first characterised using the calibration particles so day-to-day differences could also be accounted for.
A typical workflow was 30 min incubation of the particles in the test solution before being vortexed and circa 2 min to acquire the data. If required, a magnetic separation step was included. After the incubation period, the samples were placed next to the magnet for 5 min or until a clear cluster of particles could be seen. The solution was then removed, and the particles resuspended before detection.

DNAzyme particles where functionalised as above, and Ca2+ was added to make 1 μM solutions. The samples were the placed on a rotary wheel, and at 5, 10, 20, and 30 min, an aliquot was taken out and vortexed before being analysed.

Metal ion stocks were prepared from MgCl2, NiCl2, and FeCl3. These were added to DNAzyme functionalised particles to give 3 μM solutions. A mix was also prepared, which included Ca2+. Samples were left on a rotary wheel for 30 min before being vortexed and analysed.

Water samples were collected from a lap tap and an outdoor pond. DNAzyme particles were functionalised as above and added to the water samples. The samples were also spiked with Ca2+ to give a final concentration of 3 µM. They were then left on a rotary wheel for 30 min before being magnetically separated and resuspended in buffer before analysis.

Particle speed through the pore was calculated from the pulse width. As particles translocate the nanopore, they produce a pulse. The maximum magnitude of this pulse is recorded as T1.0 as this magnitude decreases multiple time points are recorded correlating to T0.9, T0.8, T0.7, etc. Here, we used the reciprocal of the value at T0.5 (width of the pulse at 50% peak height) to determine relative particle speed. These values were then normalised to either calibration particles (CPC200s) or blank peptide functionalised particles were run on the same day. Using the same nanopore and experimental conditions, normalisation was done by running multiple calibration runs, getting an average setting of 1, and then dividing the sample data by this to get a ratio. This was done to account for any differences in measured speed between different pores and different days.

Here we present RPS technologies inferring structure changes in the DNAzyme through differences in nanocarrier speed, enabling quantification of Ca2+ in solution. The cleavage of DNA post binding of the Ca2+ to the DNAzyme is measured through the increase in nanocarrier speed as it traverses the nanopore. The method works across a large concentration range, is tuneable through incubation times, and can work in environmental samples. The assay work flow from nanocarrier functionalisation to incubation, extraction, and quantification can be done in under an hour.

I.H. coordinated the experiments, ran the practical work, collected and analysed the data. M.P. supervised the project, analysed data and drafted the manuscript. All authors have read and agreed to the published version of the manuscript.

The authors would like to thank B Kralj for his guidance and support and the Nuclear Decommissioning Authority for their funding. 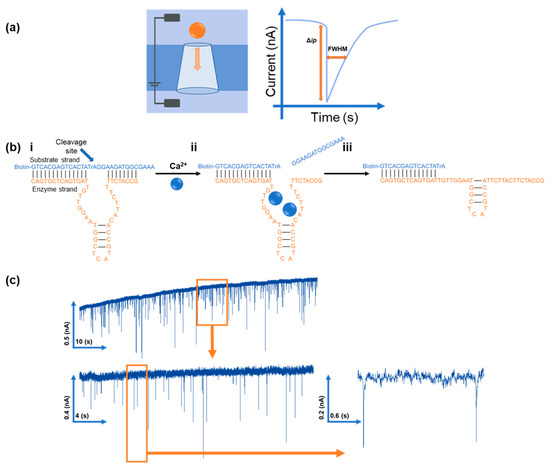 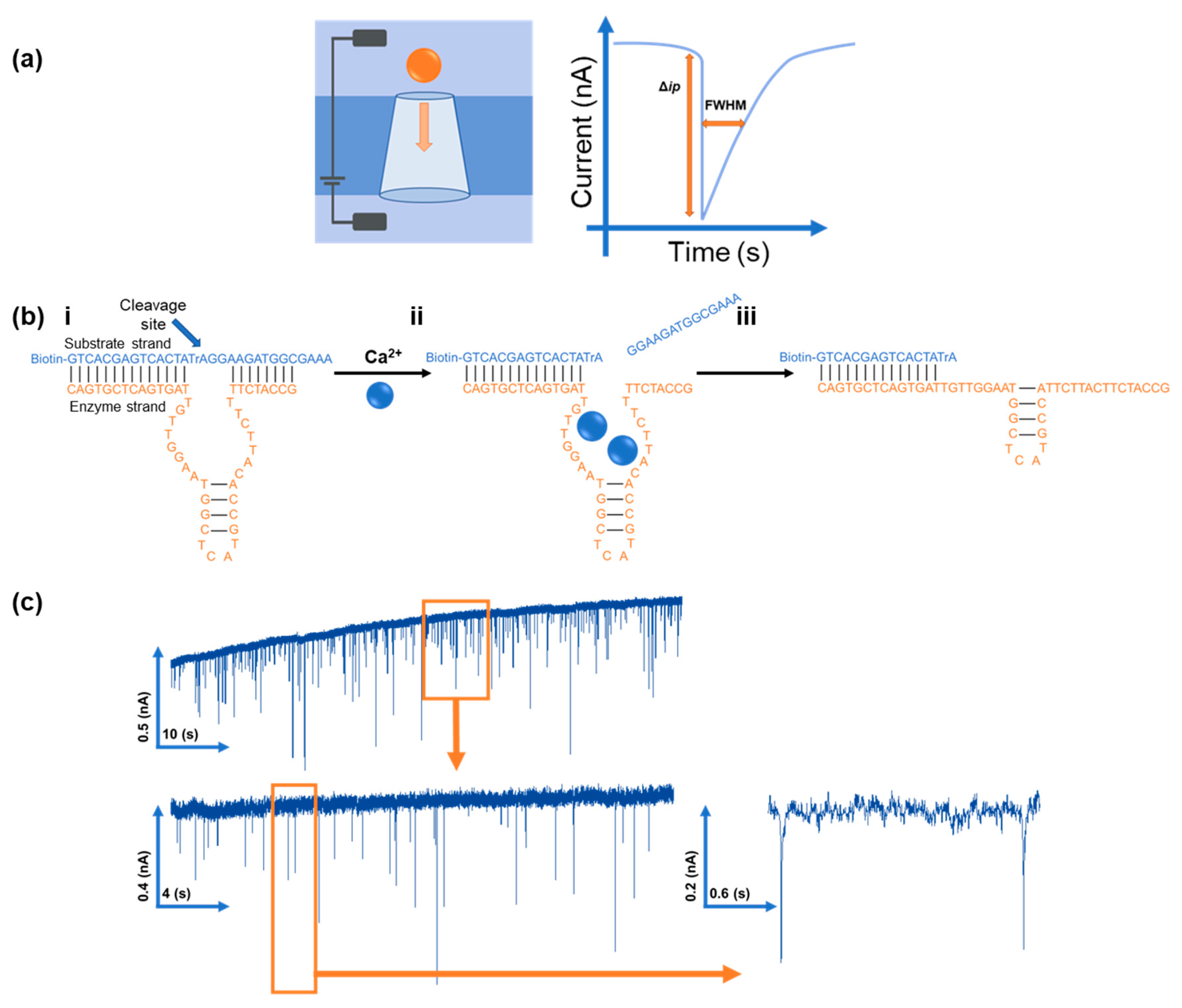 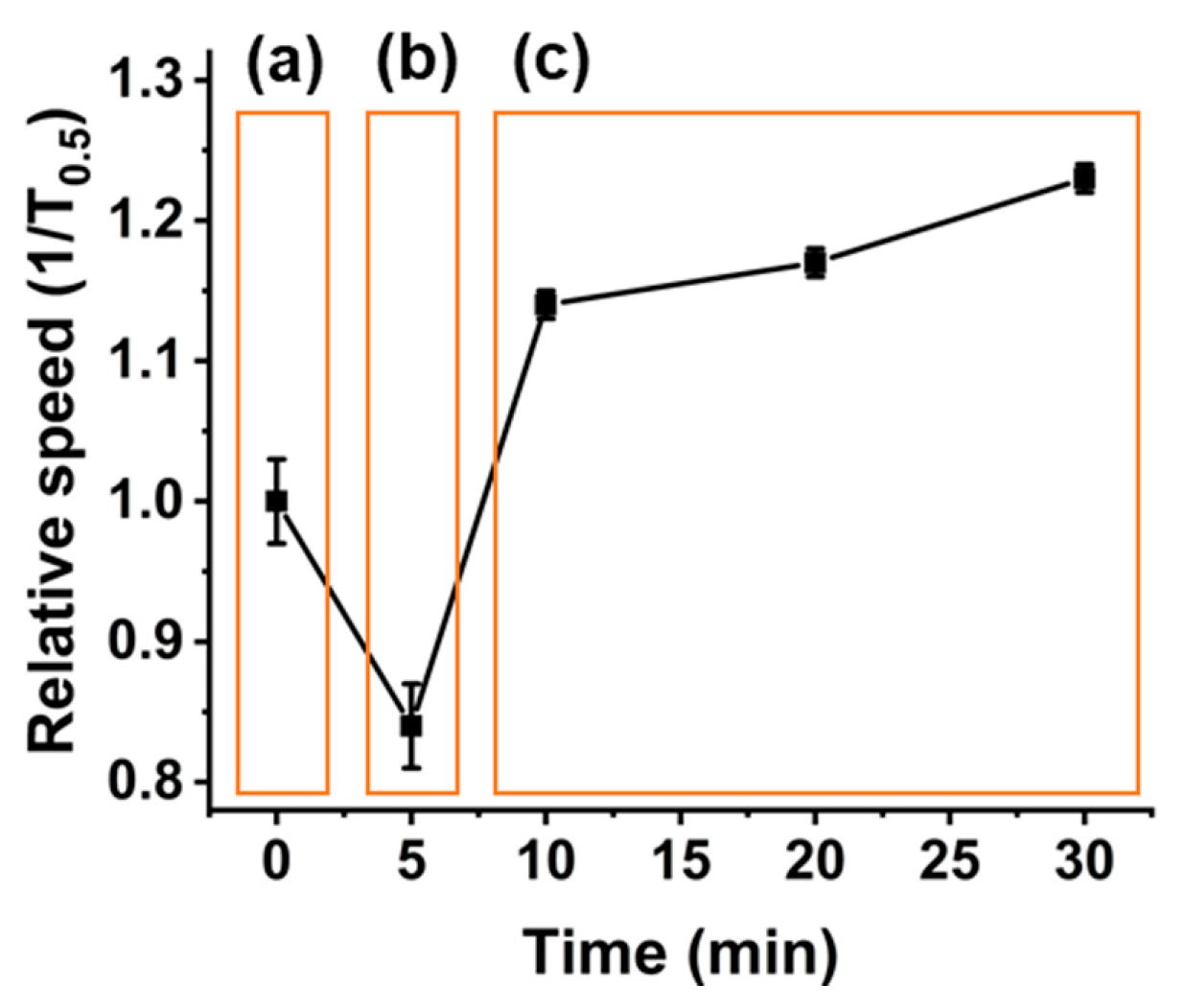