Accurate determination of plant water status is mandatory to optimize irrigation scheduling and thus maximize yield. Infrared thermography (IRT) can be used as a proxy for detecting stomatal closure as a measure of plant water stress. In this study, an open-source software (Thermal Image Processor (TIPCIP)) that includes image processing techniques such as thermal-visible image segmentation and morphological operations was developed to estimate the crop water stress index (CWSI) in potato crops. Results were compared to the CWSI derived from thermocouples where a high correlation was found ( = 0.84). To evaluate the effectiveness of the software, two experiments were implemented. TIPCIP-based canopy temperature was used to estimate CWSI throughout the growing season, in a humid environment. Two treatments with different irrigation timings were established based on CWSI thresholds: 0.4 (T2) and 0.7 (T3), and compared against a control (T1, irrigated when soil moisture achieved 70% of field capacity). As a result, T2 showed no significant reduction in fresh tuber yield (34.5 ± 3.72 and 44.3 ± 2.66 t ha), allowing a total water saving of 341.6 ± 63.65 and 515.7 ± 37.73 m ha in the first and second experiment, respectively. The findings have encouraged the initiation of experiments to automate the use of the CWSI for precision irrigation using either UAVs in large settings or by adapting TIPCIP to process data from smartphone-based IRT sensors for applications in smallholder settings. View Full-Text
Keywords: infrared thermography; image processing; canopy temperature; crop water stress index infrared thermography; image processing; canopy temperature; crop water stress index
►▼ Show Figures 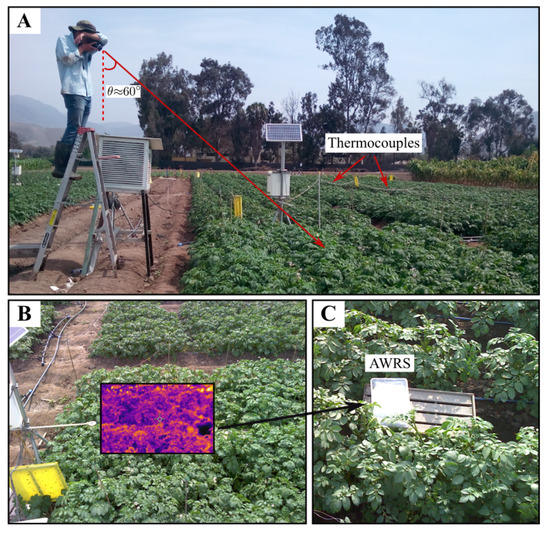