Feasibility and Reliability of SmartWatch to Obtain 3-Lead Electrocardiogram Recordings

Atrial fibrillation (AF) is the most common arrhythmia and has a major impact on morbidity and mortality; however, detection of asymptomatic AF is challenging. This study aims to evaluate the sensitivity and specificity of non-invasive AF detection by a medical wearable. In this observational trial, patients with AF admitted to a hospital carried the wearable and an ECG Holter (control) in parallel over a period of 24 h, while not in a physically restricted condition. The wearable with a tight-fit upper armband employs a photoplethysmography technology to determine pulse rates and inter-beat intervals. Different algorithms (including a deep neural network) were applied to five-minute periods photoplethysmography datasets for the detection of AF. A total of 2306 h of parallel recording time could be obtained in 102 patients; 1781 h (77.2%) were automatically interpretable by an algorithm. Sensitivity to detect AF was 95.2% and specificity 92.5% (area under the receiver operating characteristics curve (AUC) 0.97). Usage of deep neural network improved the sensitivity of AF detection by 0.8% (96.0%) and specificity by 6.5% (99.0%) (AUC 0.98). Detection of AF by means of a wearable is feasible in hospitalized but physically active patients. Employing a deep neural network enables reliable and continuous monitoring of AF.
Keywords: clinical trial; wearable sensors; atrial fibrillation; photoplethysmography; deep neural network clinical trial; wearable sensors; atrial fibrillation; photoplethysmography; deep neural network

Atrial fibrillation (AF) is the most common arrhythmia with rising incidence and prevalence [1,2]; the current prevalence is estimated to be between 2% to 4% [3]. AF is more common in males and shows an increasing prevalence with age [4]. There are a number of modifiable known risk factors for AF, including obesity, hypertension, diabetes mellitus, and smoking, as possible contributors to the development and progression of AF [5].
AF is associated with a broad spectrum of clinical events, including ischemic stroke. The proportion of time in AF associated with a significant risk for complications is unknown, thus requiring further evaluation [6]. Due to the paroxysmal and often asymptomatic occurrence of AF, ECG Holter monitoring is frequently employed to detect episodes of silent AF [7]. However, ECG Holter monitoring has limitations: Carrying an ECG Holter limits patients in their daily activities and restricts monitoring to relatively short periods of time. Additionally, ECG Holters are prone to movement artifacts, and thus, not reliable during phases of physical activity [8].
Wearables that are used as medical devices (defined as having a regulatory approval like a Conformité Européenne (CE) mark for Europe) offer an affordable non-invasive screening option for AF [9,10,11,12,13]. Photoplethysmography (PPG) is frequently employed in such wearables [14]. It is an optical method to measure volume changes in the tissue. PPG is used to calculate clinically relevant parameters, e.g., heart rate, inter-beat intervals (IBI—the interval between two pulse waves in milliseconds) [15]. Intervals between heartbeats are a parameter often used for the detection of AF. PPG derived IBI show a high correlation to the ECG derived heart rate intervals (gold-standard) [16]. Technologies employed in wearables and evaluated for the detection of AF are most often based on single-lead ECG or PPG and can be separated into active and passive approaches: Active monitoring requires that the patient initialized a recording, e.g., individuals have to place their fingers on the electrodes of a smartphone like device. In contrast, wearables with a passive monitoring approach do not require patient intervention. With this approach, measurements are performed continuously or semi-continuously (e.g., every 5 min). In a previous clinical trial with an active approach, wearable detection of AF was possible with a sensitivity of 91.5% and specificity of 99.6% [13]. In clinical trials with a passive approach, equivalent results were shown in patients where physical activity was restricted while recording. However, there was a risk of missing asymptomatic episodes of AF. When such wearables are used for ECG recordings, usage of adhesives or bandages is needed, and there are limitations regarding diagnostic adherence [9]. In the Huawei Heart Study, more than one-third of individuals with suspected AF were primarily detected with a periodical passive PPG approach [12]. However, a recent trial using a passive approach showed that there is a gap in detecting AF under controlled and uncontrolled conditions, most likely due to periods of physical activity with an increase in heart rate and movement artifacts [17]. Some wearables under evaluation had varying sampling rates, with considerable risk of missing AF [10].
A novel upper arm medical wearable (Everion®, Biovotion AG, Switzerland) employs a passive PPG approach, allowing reliable long-term, high-resolution data recording. This device records of patients’ physical activities during recording and provides information about the proportion of the automatically interpretable time.
The aim of this study was to evaluate the performance of a medical wearable by means of employing a PPG technology for AF detection in patients with paroxysmal or persistent AF study during inpatient conditions.

Detection of AF in the algorithm testing dataset was possible with a sensitivity of 95.2% and a specificity of 92.5% (Table 2) based on nRMSSD algorithm. Data obtained with the ECG Holter contained 5156 five-minute periods of AF. For 4469 of these episodes, simultaneous wearable data of sufficient quality was available. Of these 4,469 periods (algorithm training and algorithm testing), 4141 were correctly classified (true positive) as AF. In total, 1905 periods were classified false-positive, 328 periods were false-negative. Of the 1905 false-positive periods, 88 (4.6%) had a positive activity index. During 3,464 five-minute time periods with physical activity, AF was present in 755 (21.8%) periods. Of these, 701 periods were correctly classified as AF with a minor decrease in sensitivity (92.9%) and specificity (85.5%).

Patients with an interpretable time ≥ 80% were allocated to one group, and differences in comorbidities, concomitant medication, arm circumference, and activity index were compared to those with an interpretable time < 80% (Table 3). Descriptive characteristics between the two groups differed as follows: Patients with an interpretable time < 80% were older (p = 0.023) and used more antihypertensive agents (beta-blockers, p = 0.020; renin-angiotensin system inhibitors, p = 0.031). Logistic regression analysis showed that age (p = 0.039, OR 0.95, CI 0.904–0.997) had a negative impact on interpretable time. In contrast, height had a positive impact (p = 0.002, 1.10, 1.034–1.162).
Measurement conditions in both groups with respect to heart rhythm, side of recording, arm circumference, and activity index were comparable (Table 3). The physical activity level of all patients during 24 h was 16.1% based on a positive activity index in five-minute periods.
The activity index showed peaks after breakfast and in the afternoon (Figure 4).
Carrying the wearable did not induce any discomfort or pain in 97.5% of the patients. More than 70% of the patients could envisage using such a wearable for home monitoring. No serious adverse effects were observed during the trial; however, one device-related adverse effect was observed; a skin irritation after wearing the device was fully reversible after six days.

In conclusion, detection of AF with a medical wearable attached to the upper arm is a feasible and reliable approach, also during physical activity for remote monitoring purposes. The results presented encourage the performance of long-term clinical trials with a focus on everyday conditions. Assuming a positive outcome of such studies, monitoring of patients with AF might move away from Holter ECG towards medical wearables.

This research received funding from the internal grant program (PhD Program Biomedicine) of the Faculty of Health at Witten/Herdecke University, Germany and by a grant of HELIOS Kliniken GmbH (Grant-ID 047476), Germany.

We would like to thank A. Caduff, A. Uhde, P. Vettel, R. Amacher, G. Haas, the clinical staff of the Department of Cardiology, Helios University Hospital of Wuppertal and the Centre for Clinical Studies (P. Thürmann, K. Graf, W. Eglmeier, R. Geißen, S. Schmiedl, F. Hohmann), University Witten/Herdecke for their support.

The author declares that there is no conflict of interest. This trial was an Investigator Initiated Trial. This study used the wearable “Everion”-Device provided by Biovotion AG, Switzerland. Biovotion did not provide any financial support for the research and had no impact on writing of the manuscript. Biovotion did not participate in the analysis of the data or influence the conclusions in any sense. 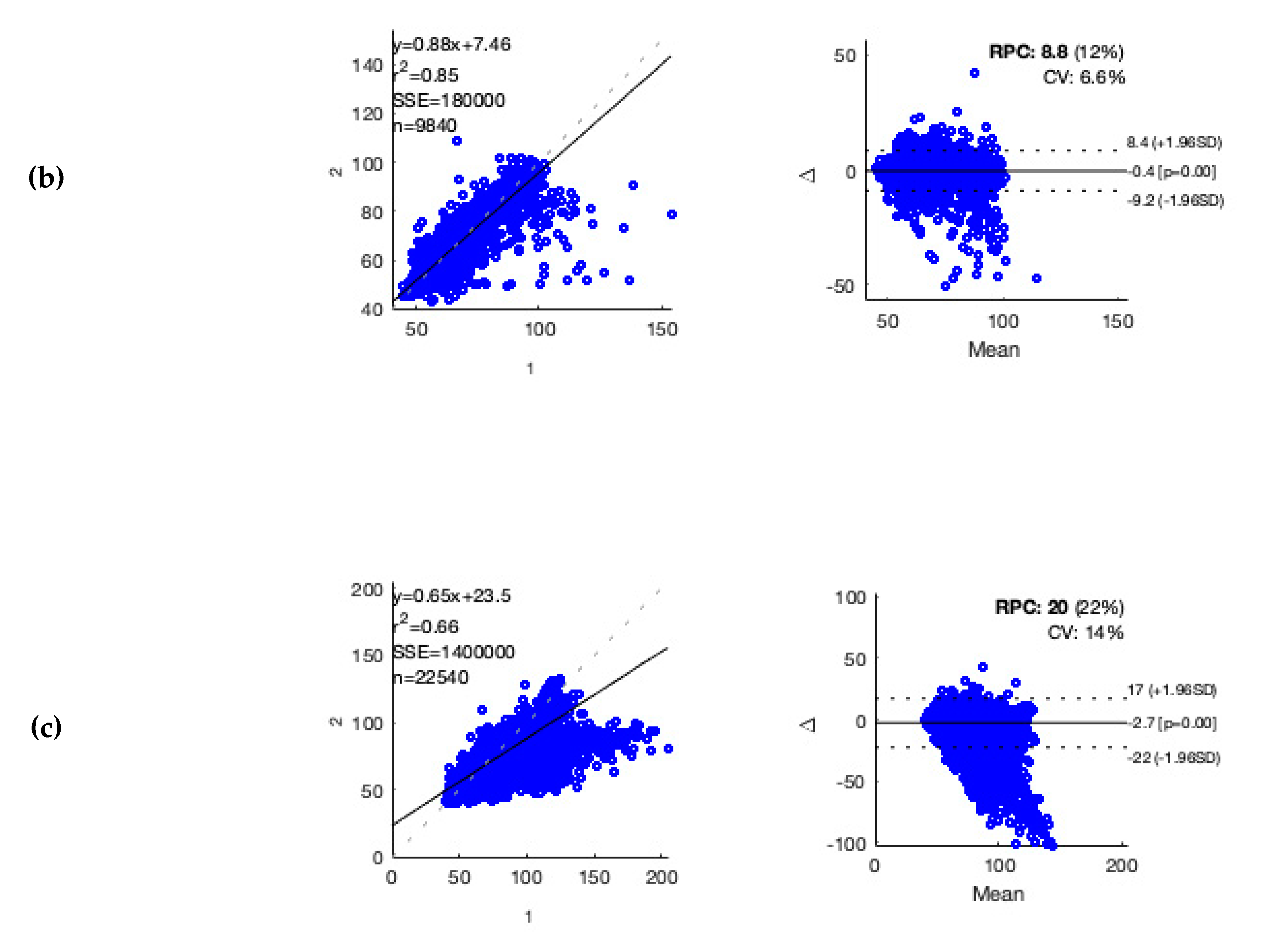 Data preparation: We split recordings of inter-beat intervals (IBI) values into five-minute periods, which are manually classified into AF, A-flutter, and non-AF. We extract periods that have at least 80% reliable IBI values (quality score of IBI values ≤ 13, with 1 indicating best quality and 16 worst quality) and split them into a training set and validation set. We encode the IBI values together with their quality score into a 16 dimensional vector, e.g., = [0, …, IBI-value, …, 0,], where IBI values with different quality score are orthogonal to each other. As the dataset contains more non-AF examples than AF examples, we simply oversample the AF class to make the dataset balanced. For the analysis, we took all five-minute periods that contain at least 200 IBI values and could be uniquely assigned to the non-AF or AF class.
Neural Network Model: We trained deep neural networks to maximize the mutual information between the first t IBI values and the subsequent k IBI values within a five-minute periods, with t a randomly chosen time point. Computation of the mutual information is realized by first encoding the sequence of IBI vectors by recurrent neural network to encode the information into a vector and make use of the InfoNCE objective [18] to estimate the mutual information between and for . As a result, contains all information that can be used to predict the next 4 IBI values. Using mutual information as objective for unsupervised learning has the advantage that no data-pre-processing steps are needed, such as rescaling mean and variance of IBI values, and that noise is mostly discarded in the encoding of . To classify the training set into AF and non-AF we train a fully connected network with two hidden layers that takes at the end of the period as input and predicts the labels from the manual classification. This deep learning setup (consisting of unsupervised feature extraction followed by a classifier on the relevant features) is especially valuable for cases where large amounts of unlabeled data can be recorded easily, and accurate classification is expensive or time-consuming. 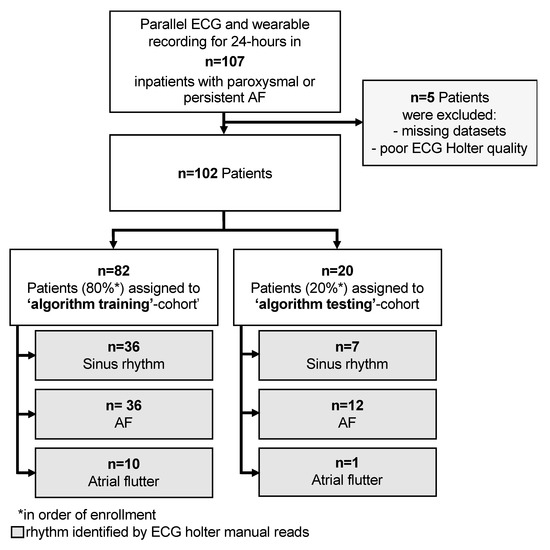 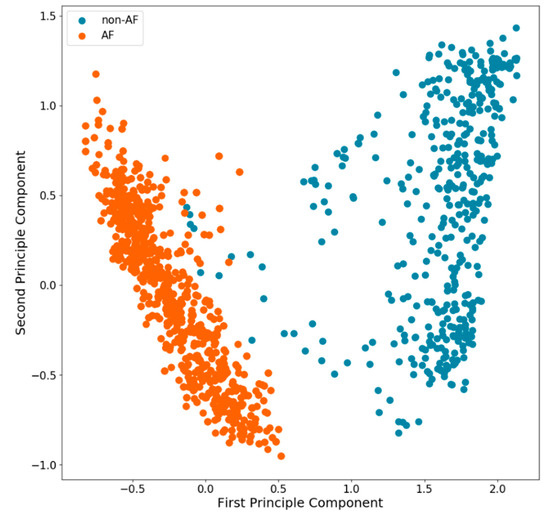 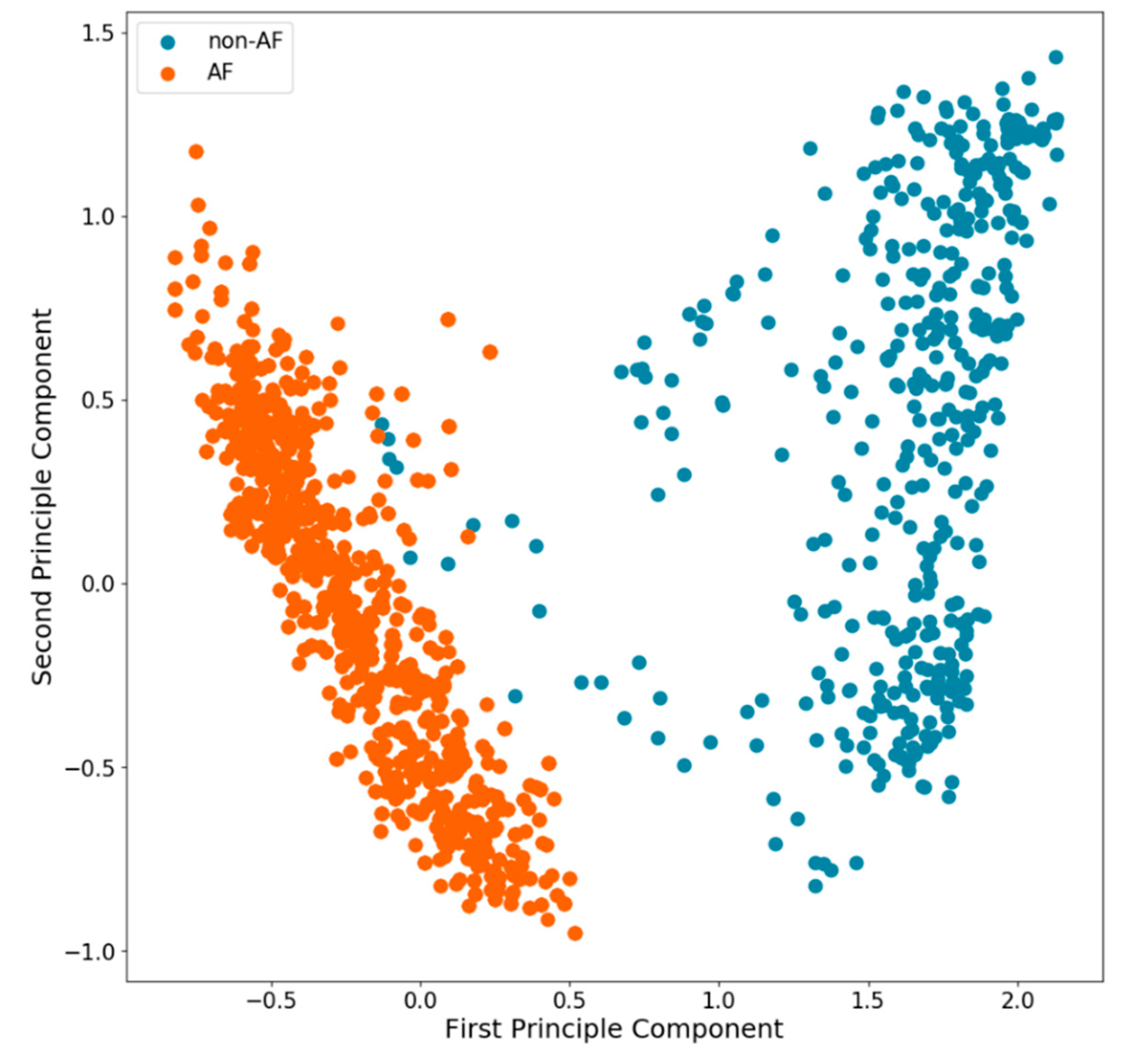