The far-field pattern is mainly related to the array factor when a linear antenna array consists of elements placed along the x-axis as shown in Figure 1.
The array factor of a broadside linear array on the x-z plane is expressed as follows [24]: where the elements of the vectors , , and are the position coordinates, the excitation amplitudes and phases of array elements, respectively. is the wavelength, is the steering angle of the antenna from the positive z-axis, and N is the number of array elements.
In this paper, we consider an N-element equally spaced linear symmetric antenna array with an adjacent element separation of . Consider the case that N is even, with the phases of all array elements zeroed in advance, Equation (1) becomes
The excitation amplitudes are taken as the optimization variables and constrained within [0,1]. The sidelobe suppression, along with the beamwidth constraint, serves as the optimization objective. The objective function is given by where S is the area outside of the main beam in the pattern. The first term on the right side of the equation is the normalized maximum sidelobe level (MSL). denotes the first null beamwidth (FNBW), which is calculated as the angle difference between the minimum amplitude points nearest to the peak of the main beam on the left and right in the pattern. is the desired FNBW. is the penalty factor set to 104. For the anti-interference function, by adding a null depth term of which the penalty factor is set to 1, the objective function becomes where is the given angle direction of the mth null. The optimization model can then be expressed as and the result of pattern synthesis can be obtained by optimizing this model with the given random optimization algorithm.

The simplicity, high efficiency and robustness of the classic DE algorithm proposed by Rainer Storn and Kenneth Price make it suitable for solving many nonlinear problems. Firstly, an initial population is randomly generated in the constrained optimization space, where D is the dimension of the variable, and NP is the population size. After initialization, the steps to update the population in each iteration can be divided into three operations: mutation, crossover, and selection.
The mutation operation is the process of generating the mutation vectors through a linear calculation of the parent vectors and the differential vectors. The expressions of the two most common strategies are given as follows:

where the subscripts , , and are three different integers chosen from randomly and not equal to i. is the optimal vector in the Gth generation population, and F is the scaling factor, which is a constant within [0,1].
The crossover operation is the process of generating trial vectors by the binomial crossover between the mutation vectors and the parent vectors expressed as follows: where is the crossover rate. For each i and j, rand is a uniformly distributed number within [0,1]. is an integer randomly chosen from [1, D] for each i, which guarantees the diversity of searching. The trial vectors out of the boundary constraints can be adjusted by where and are the lower and upper boundary of the optimization space, which are set to 0 and 1, respectively as in Section 2.
Finally, the selection operation, which is greedy, is to choose the better individuals from the trial vectors and the parent vectors, and place them into the parent population of the next generation. As shown in Section 2, the purpose of the pattern synthesis is to find the minimum of the objective function. Hence, the specific operation can be expressed as where is the objective function value. The selection operation is a successful update when satisfies , and such condition is of great significance in the JADE algorithm and SPS framework introduced next.

The JADE algorithm proposed by Jingqiao Zhang and Arthur C. Sanderson is an adaptive DE algorithm with an optional external archive that improves the performance of the classic DE algorithm. The improvements mainly consist of the selection of mutation strategies and the adaptive adjustment of control parameters.
The selection of mutation strategies seriously affects the balance between the search ability and the convergence rate. Therefore, it is significant to choose an appropriate mutation strategy. The JADE algorithm provides a compromise strategy by giving consideration to both sides, which is named as DE/current-to-pbest/1 and can be expressed as where the subscripts , , are randomly chosen, and . is a vector randomly selected from the top p 100% of the current parent population sorted from best to worst, and p is a given parameter within [0,1]. is a vector randomly selected from the union of the current parent population and the archive defined by the set of archived inferior solutions. The archive is one of the improvements of the JADE algorithm. It is initialized as empty with a maximum population size of NP. Whenever a successful update is completed, the replaced vector enters the archive. When the number of vectors in the archive is equal to NP, the newly entered one will randomly replace an original one. This procedure can expand the selection space of the difference vector and further enhance the search diversity.
It can be seen in Equation (12) that the scaling factor F is no longer a constant; instead, it is independently generated for each individual in the population at each generation. Similarly, the crossover rate CR is also a variable. These two parameters are generated by and truncated to [0,1] (especially, will be regenerated if ), where for each i, and are random numbers generated by a Cauchy distribution that serves to diversify the scaling factors, and a Gaussian distribution, respectively, with location parameter a and scale parameter b. and are initialized as given parameters and , respectively, and updated after the selection operation at each generation: where denotes the numerical average, c is a given constant within [0,1]. and are the sets of scaling factors and crossover rates corresponding to all individuals that have completed the successful updates in the current population, which guide the selection of control parameters at the next generation and realize the adaptive adjustment to overcome the lack of adaptability to the optimization problems. Therefore, this improvement is helpful to adjust the mutation and crossover operation timely and to further solve the pattern synthesis problems pertinently with a high convergence rate to shorten the searching time.

Although the JADE algorithm can improve the convergence performance, problems may arise in the multiple-dimensional cases such as the pattern syntheses. When the optimization dimension increases, the aggregate of the solutions will grow exponentially, resulting in a sharp increase in the number of local optima, and the high convergence rate will lead to the global searching trapping in these local optima. Consequently, it will be harder and take longer to find the new optimal solutions in the population when the DE algorithm is applied to the large-scale antenna arrays pattern syntheses with a large number of the array elements. This phenomenon is called stagnation, and to overcome this, here, the SPS framework that can provide a timely response to the stagnation occurring is utilized to further improve the optimization ability of the DE algorithm and the efficiency of the pattern syntheses.
The core of the SPS framework is to use different parent vectors in the mutation and crossover operation. In the DE algorithm, when the stagnation occurs, a population individual cannot be successfully updated for a long time. In this case, the last NP vectors that complete the successfully updates in the history, dubbed the successful parents, will be chosen as the parent vectors instead of the vectors selected at the previous generation. The algorithm can then be guided out of the stagnation by successful parents with a higher potential of searching. The standard to measure whether stagnation occurs is the total number of selection operations performed for each population individual over the duration that the individual continuously fails to be updated. When this number is greater than the given stagnation tolerance Q, the stagnation occurs, and the algorithm will use the successful parents to update the population. This novel method of the parent selection makes the algorithm keep exploring a better solution efficiently without the reduction of the convergence rate, which shows its potential to solve the high dimensional optimization problems.
Theoretically, the SPS framework can be applied to the general DE algorithms. In this paper, the introduced JADE algorithm is combined with the SPS framework as the SPS-JADE algorithm, which is further applied to the pattern synthesis of the linear antenna arrays introduced in Section 2. The flowchart of the SPS-JADE algorithm is shown in Figure 2.

The linear symmetric antenna array used here has 40 array elements, which is relatively more than the examples in the previous works mentioned in Section 1 [20,21,22,23], with an adjacent element spacing of . In the following simulation experiments, the parameters are chosen by referring to [18,19] and trained by using simulations under the optimization model of the antenna array to achieve a better optimization effect. For the SPS-JADE algorithm, , , , , and . Comparisons are made with other random optimization algorithms by using the same example and appropriate parameters setting. For the classic DE algorithm with DE/best/1, and ; for the improved GA algorithm in [25], the mutation probability ; for the jDE algorithm [26], the initial control parameters , ; for the SaDE algorithm [27], the learning period ; for the DEGL algorithm [28], the mutation parameters , the crossover rate , and the neighborhood size is the 10% of the population size; and for the JADE algorithm without the SPS framework, , , , and . In all these algorithms, the desired FNBW . The angle resolution is set to . The population size and the maximum number of the iterations are set to 50 and 300, respectively, to examine the convergence performance of the algorithms.

Assume the null at the direction of . The other parameter settings are the same as in Experiment A. Seven algorithms above are used to in the simulation experiment of the pattern synthesis of the same 40-element linear symmetric antenna array to simultaneously achieve null depth and sidelobe suppression. Thirty independent runs are repeated for each algorithm, where Equation (5) is used as the objective function.
The best, the worst, the average values, and the standard deviations of the normalized MSLs by different algorithms are given in Table 4. The best, the worst, and the average values of the normalized null depths are given in Table 5, and the optimal patterns are shown in Figure 5. Table 6 presents the optimal excitation amplitudes of the array elements computed by the SPS-JADE algorithm. It can be seen that the SPS-JADE algorithm, which obtains the normalized MSL below −38.25 dB, is still superior to the other algorithms in the sidelobe suppression despite considering the successfully generating deep null with the null depth lower than −130 dB at the desired direction. Furthermore, it is shown that the SPS-JADE algorithm can remain robust with a low standard deviation of the normalized MSLs about 0.17 dB. The average convergence rates of different algorithms are shown in Figure 6. Comparing with Figure 4, we can see that the convergence performance of each algorithm is similar to that in Experiment A, and the SPS-JADE algorithm again shows its advantage in the convergence rate.

This research was funded by the National Natural Science Foundation of China, grant number 61471019. 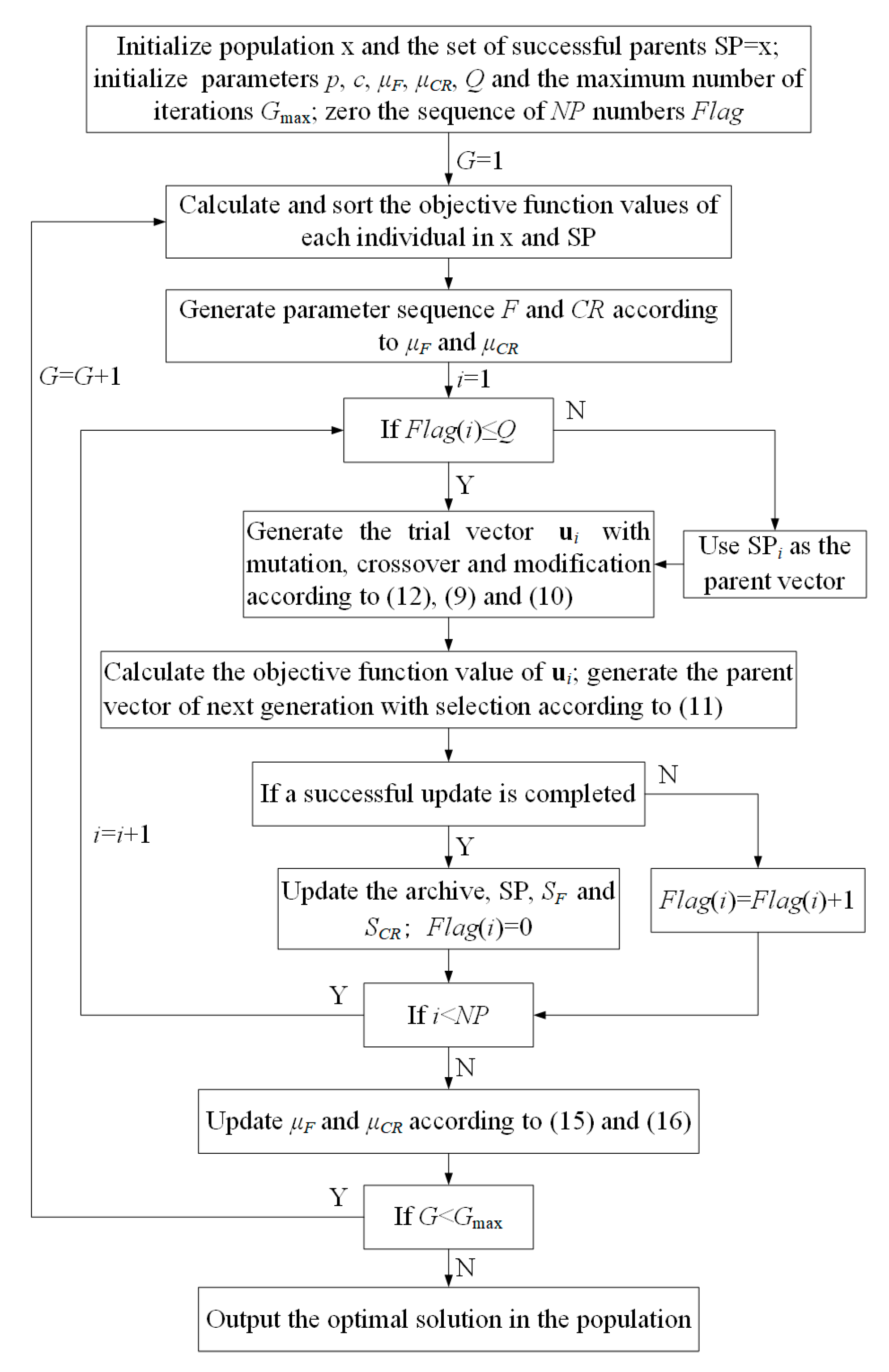 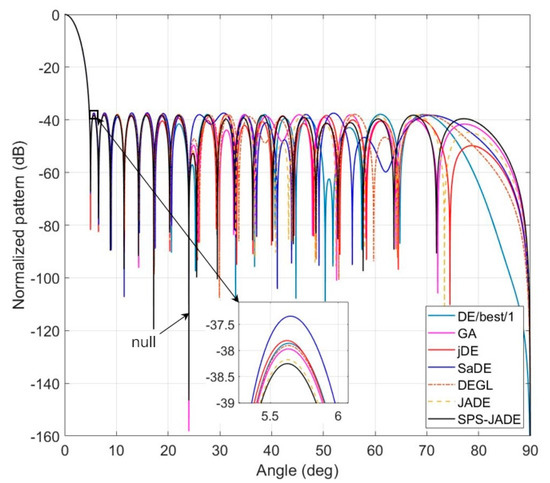 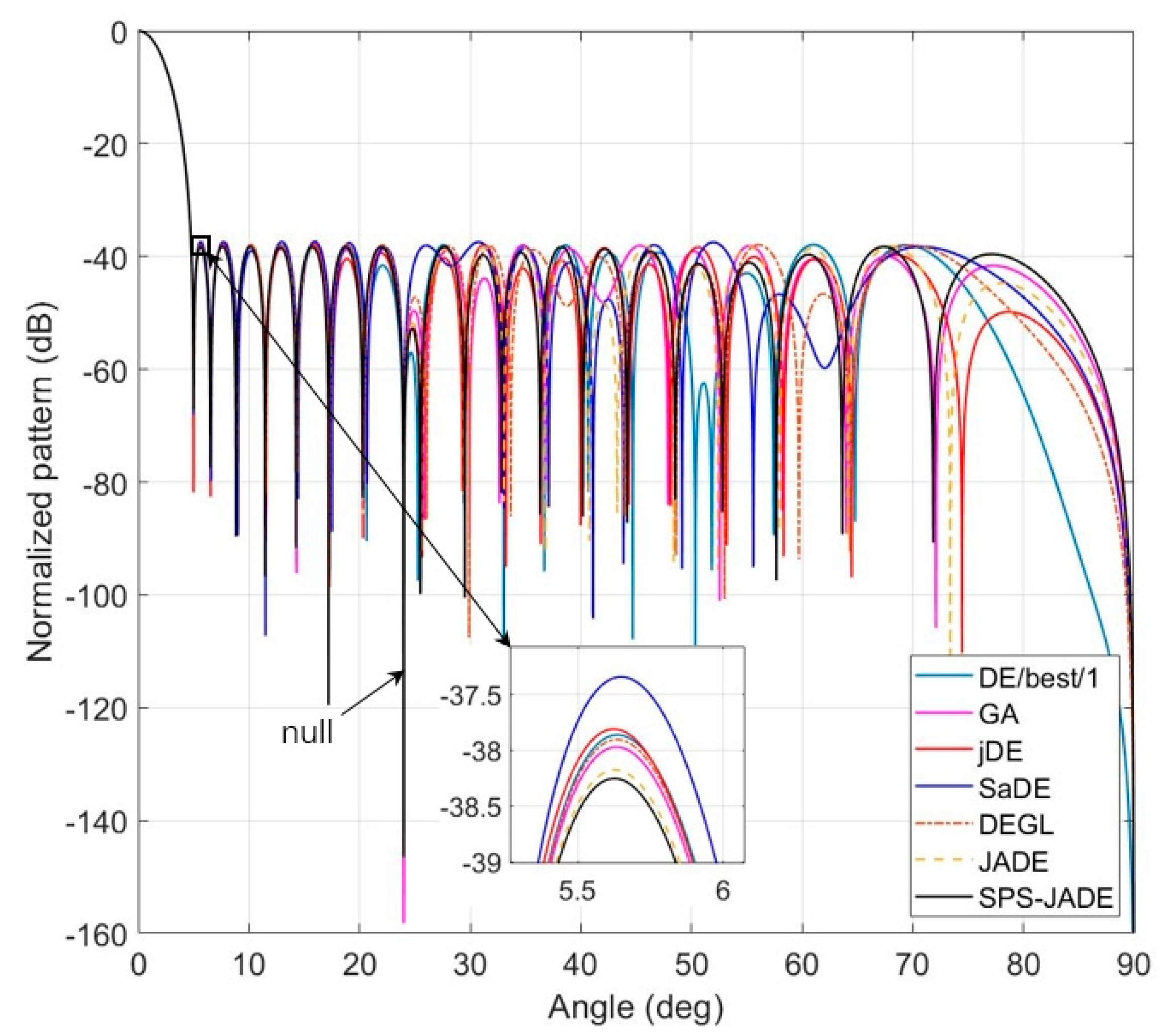 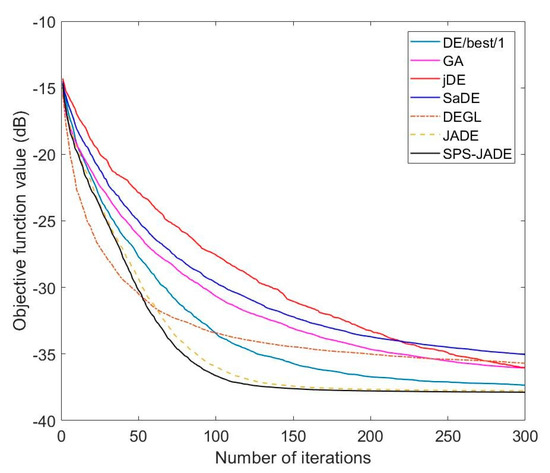