Internet of Things for Smart Spaces: A University Campus Case Study
Next Article in Special Issue

Tracking of biological and physiological processes on the nanoscale is a central part of the growing field of nanomedicine. Although atomic force microscopy (AFM) is one of the most appropriate techniques in this area, investigations in non-transparent fluids such as human blood are not possible with conventional AFMs due to limitations caused by the optical readout. Here, we show a promising approach based on self-sensing cantilevers (SSC) as a replacement for optical readout in biological AFM imaging. Piezo-resistors, in the form of a Wheatstone bridge, are embedded into the cantilever, whereas two of them are placed at the bending edge. This enables the deflection of the cantilever to be precisely recorded by measuring the changes in resistance. Furthermore, the conventional acoustic or magnetic vibration excitation in intermittent contact mode can be replaced by a thermal excitation using a heating loop. We show further developments of existing approaches enabling stable measurements in turbid liquids. Different readout and excitation methods are compared under various environmental conditions, ranging from dry state to human blood. To demonstrate the applicability of our laser-free bio-AFM for nanomedical research, we have selected the hemostatic process of blood coagulation as well as ultra-flat red blood cells in different turbid fluids. Furthermore, the effects on noise and scanning speed of different media are compared. The technical realization is shown (1) on a conventional optical beam deflection (OBD)-based AFM, where we replaced the optical part by a new SSC nose cone, and (2) on an all-electric AFM, which we adapted for measurements in turbid liquids. View Full-Text
Keywords: piezoresistive cantilever; self-sensing; self-actuating; electrical readout; platelet; all electric AFM; blood; AFSEM piezoresistive cantilever; self-sensing; self-actuating; electrical readout; platelet; all electric AFM; blood; AFSEM
►▼ Show Figures 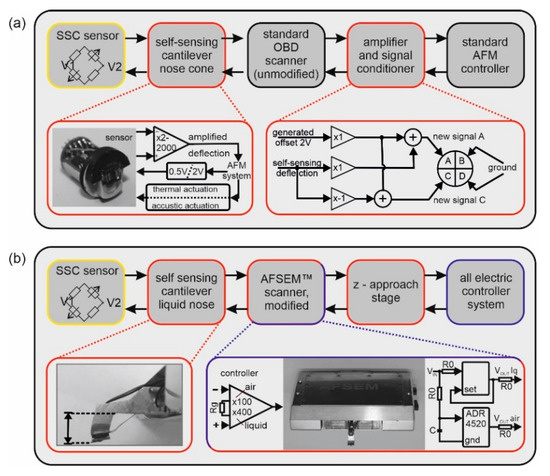