In light of the dynamic technological development that is taking place at present, the proper operation of technical devices is an extensive and complicated task. One of the key elements that ensures the proper operation of devices is the measuring and monitoring of their most important parameters. To be able to properly carry out diagnostics and the operation of devices, it is necessary to rely on reliable measuring instruments. This reliability can be confirmed by periodically checking the technical condition of the measuring instruments in the process of calibration or verification. The form of metrological control depends on the type of instrument and its intended use [1]. In the case of instruments intended for military purposes, the applicable regulations require that each measuring instrument is subject to periodic metrological control [2]. The number of measurements carried out increases in line with technological development. At the time of great geographical discoveries, sailing ships that were able to reach virtually any place on Earth required for their functioning a compass, a sextant, and possibly several other simple measuring instruments. Currently, even small vessels are equipped with several hundreds of more specialized measuring instruments. This causes a significant increase in the demand for metrological services [3]. Figure 1 shows the increase in the number of calibrated instruments using the First Military Metrology Center as an example. The information presented in Figure 1 was created on the basis of data from the military metrology information system LOGIS_NET and collected by the author during his work at the First Military Metrology Center in 2013–2018.
As can be seen in the graph, the number of measuring instruments subject to metrological services is constantly increasing. This tendency will probably continue or increase in the coming years. To meet these challenges, metrology takes actions to improve work efficiency. One of the methods to increase work efficiency is to introduce measurement automation [4]. In the modern world, as a result of automation, measuring equipment is becoming increasingly more complicated and more expensive, but much simpler to use [5]. This results in dynamic development and the introduction of an increasing number of new measuring methods using systems or devices, as well as a significant degree of automation.
Automation of the calibration process applies to both civilian [6] and military institutions [7]. Instruments for measuring virtually all common physical quantities, such as mass [8], resistance [9], as well as specialized instruments such as AC/DC transfer standards [10] and power meters [11], are subjected to the automation process. From the point of view of this article, the most interesting group of devices are digital multimeters. Digital multimeters are one of the largest groups of measuring instruments used for military purposes. For these instruments, it is necessary to determine the measurements for many ranges of different physical quantities, which is a time-consuming and labor-intensive activity [12].
To simplify and shorten the service time, various methods of automating this process are introduced. For example, in the First Military Metrology Center, MET/CAL [13] and Calpro 101 [14] software is used, which allows semi-automatic and fully automatic calibration of some types of digital multimeters. Multimeter calibration software is also created either completely proprietary [15] or based on existing solutions such as LabView or LabWindows/CVI [16].
As can be seen from the examples cited, automating the calibration process is not a new concept, in contrast, it is widely used and brings measurable effects. At the same time it must be remembered that a prerequisite for performing such calibration is that the checked multimeter has a communication interface that allows reading the measurement results [17,18].
To eliminate this limitation, many concepts and solutions based on computer vision have been created. The concept of using image recognition algorithms to automate the calibration process is also not new. In the global literature, there are articles that describe the process of automatic calibration of both digital and analog instruments [19], and different approaches and algorithms are presented. The basis of most operations is the division of the image into individual segments corresponding to individual digits, although there are solutions that eliminate this inconvenience [20]. Although the articles present algorithms and software solutions, most authors do not state how effective they are [21]. These works, where the topic of effectiveness is considered, provide information about the lack of 100% effectiveness [22] or about effectiveness at the level of 99.33% [23] or 99.75% [24]. Although these are relatively high efficiencies, in the solution presented in this article, thanks to focusing only on seven-segment displays, we managed to achieve 100% result recognition efficiency. Due to the fact that a very large group of the digital multimeters used in the army do not have communication interfaces and so far have not been considered as automation objects, the concept of creating a communication interface was developed. Such an interface is able to continuously read the measurement results from the display and to transfer these data to a computer. Furthermore, in this article, the principle of operation and a practical prototype solution are presented. An interface based on computer vision is the basic element of the entire automated calibration system, and the system is adapted to the specifics of the work of military metrology laboratories—including the methods and tools used in the army. The system also meets the requirements of management systems, being compliant with the ISO 17025 standard used in military metrology centers in Poland.

To compare the proposed solution to the method currently used, a full calibration of several types of multimeters was performed, selecting the measurement points in accordance with the applicable methodologies. The detailed results obtained with the help of an automated measuring station are presented using the calibration of a FLUKE 27 multimeter as an example. The basis for determining the measurement points was the PP-07.10.01-2-2018-1WOM-multimetry_cyfrowe procedure, which was written based on References [37,38]. Calibration of multimeters was performed manually by three different people using a spreadsheet to place the results, perform the calculations, and create a final report. The second method used for comparison was also the widely used semi-automatic method based on the MET/CAL software. In this method, the technician performing the calibration does not need to specify specific output quantities from the calibrator himself—this is done by the control software. However, writing the results from the display of the calibrated multimeter is done by a technician. In this case, three calibrations were also carried out by three different people. The last method was the automatic calibration method described in this article using the OCR Digit Reader software. The time for performing full calibration with all three methods is shown in Figure 8.
Based on the tests, it was confirmed that the full calibration procedure for the FLUKE 27 multimeter was reduced at an average of 54% compared to manual calibration. Compared to the semi-automatic method based on the MET/CAL software, the average time reduction was 33%.
In order to confirm the effectiveness of the proposed solution, other types of multimeters were tested in an analogous way. The results of these tests are presented in the form of a graph in Figure 9.
The tests carried out on different types of multimeters confirmed the effectiveness of the proposed method. In each of the tested multimeters, the calibration time was shortened, both in comparison with the manual and semi-automatic methods based on the MET/CAL software. 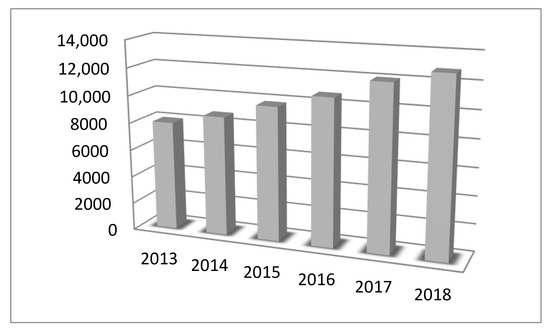 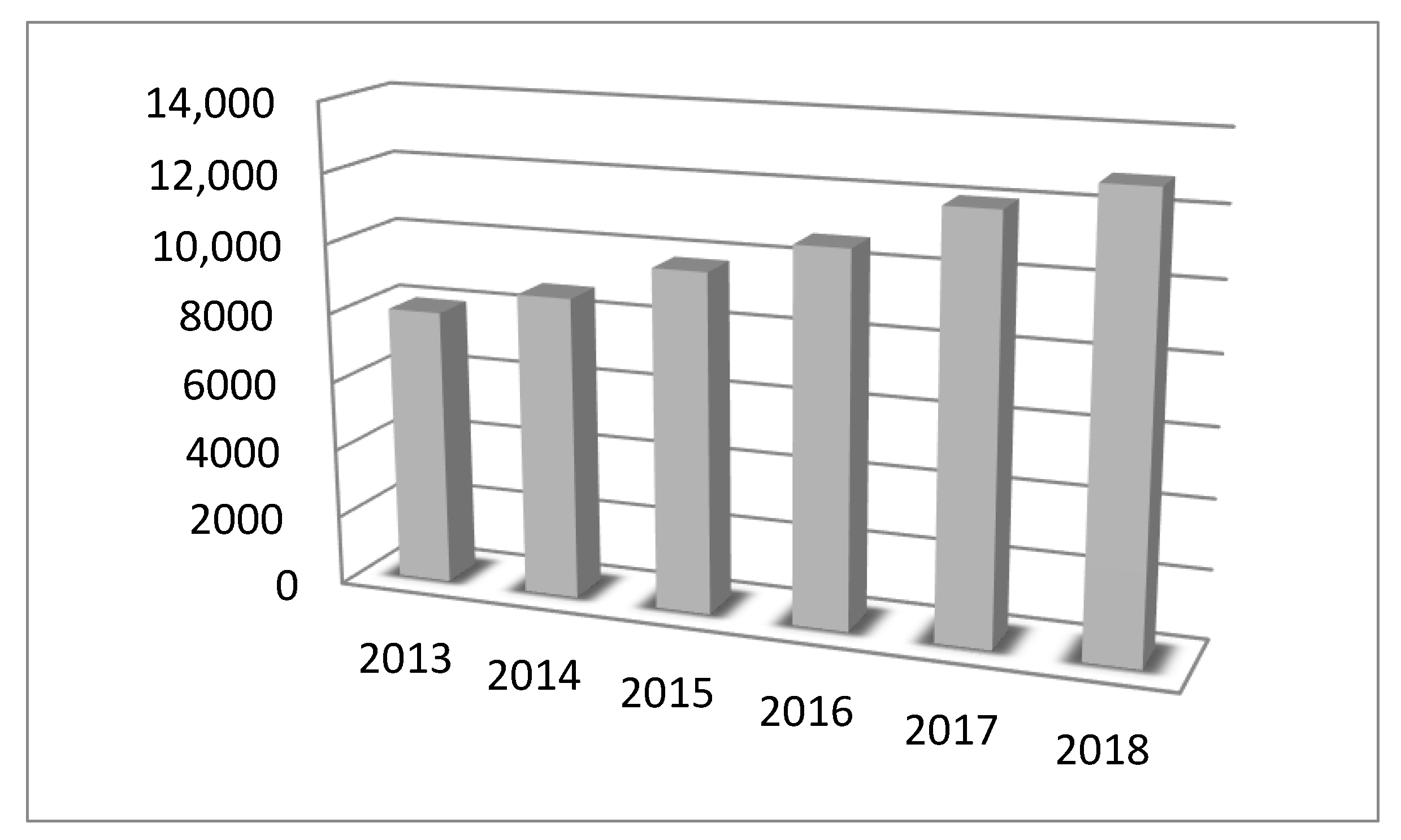 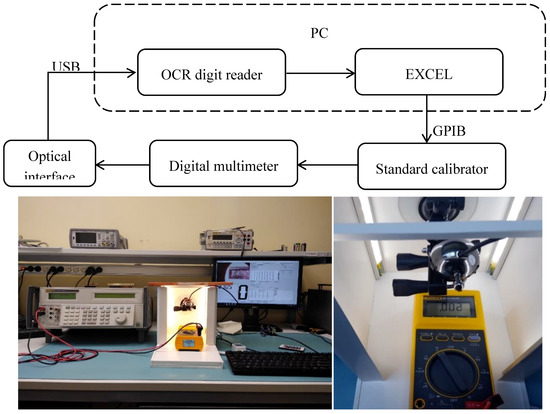 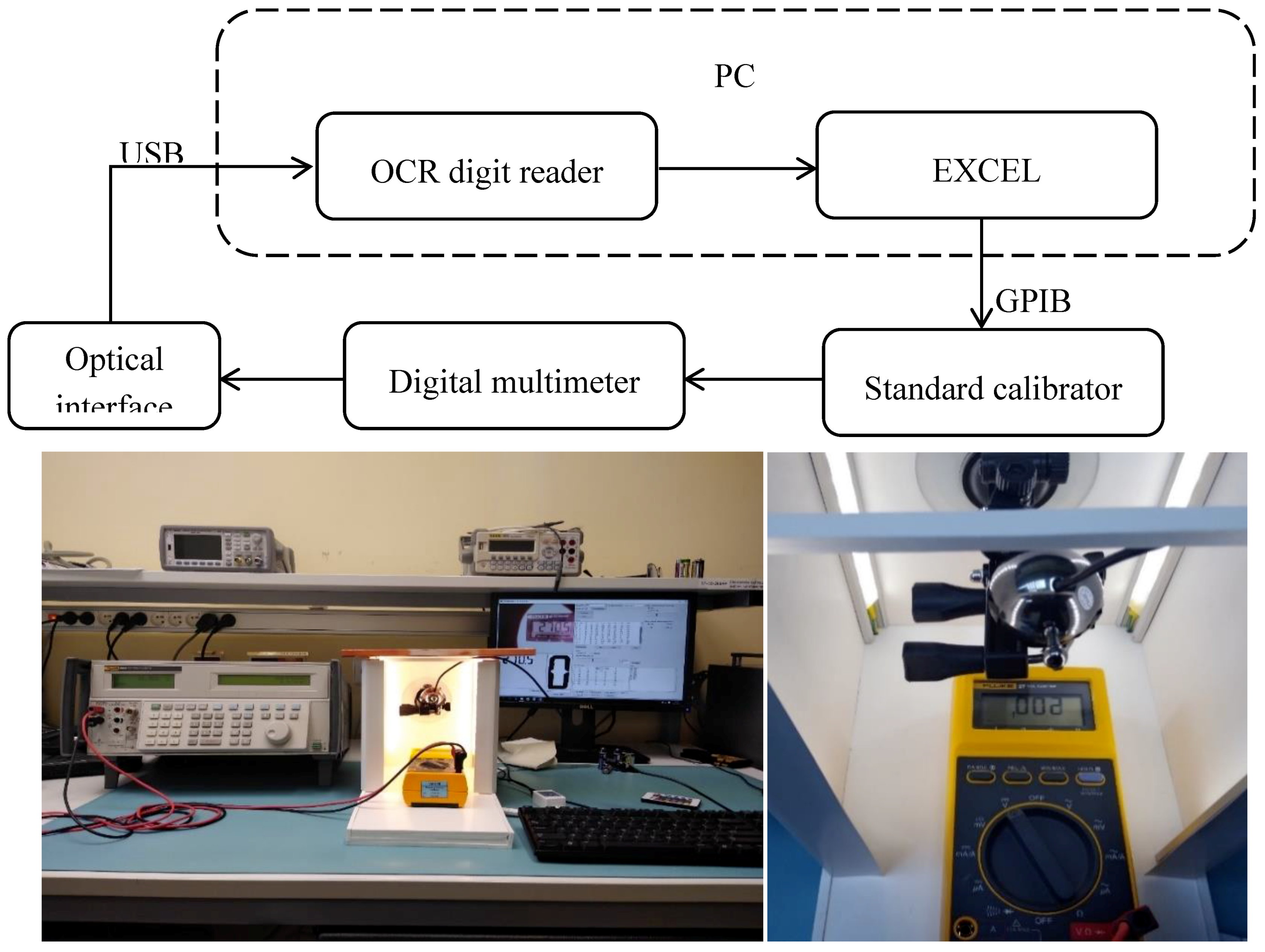 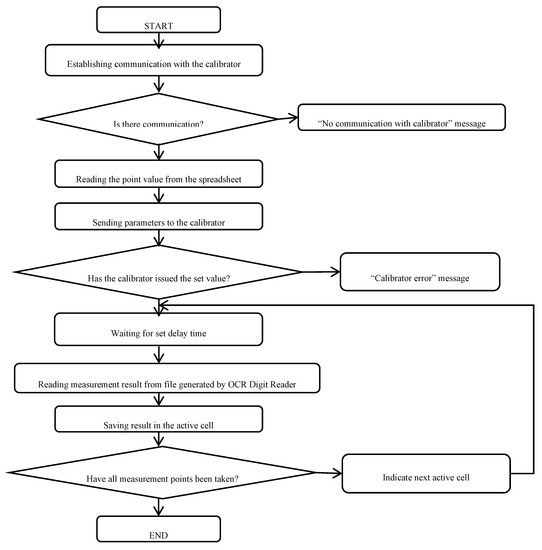 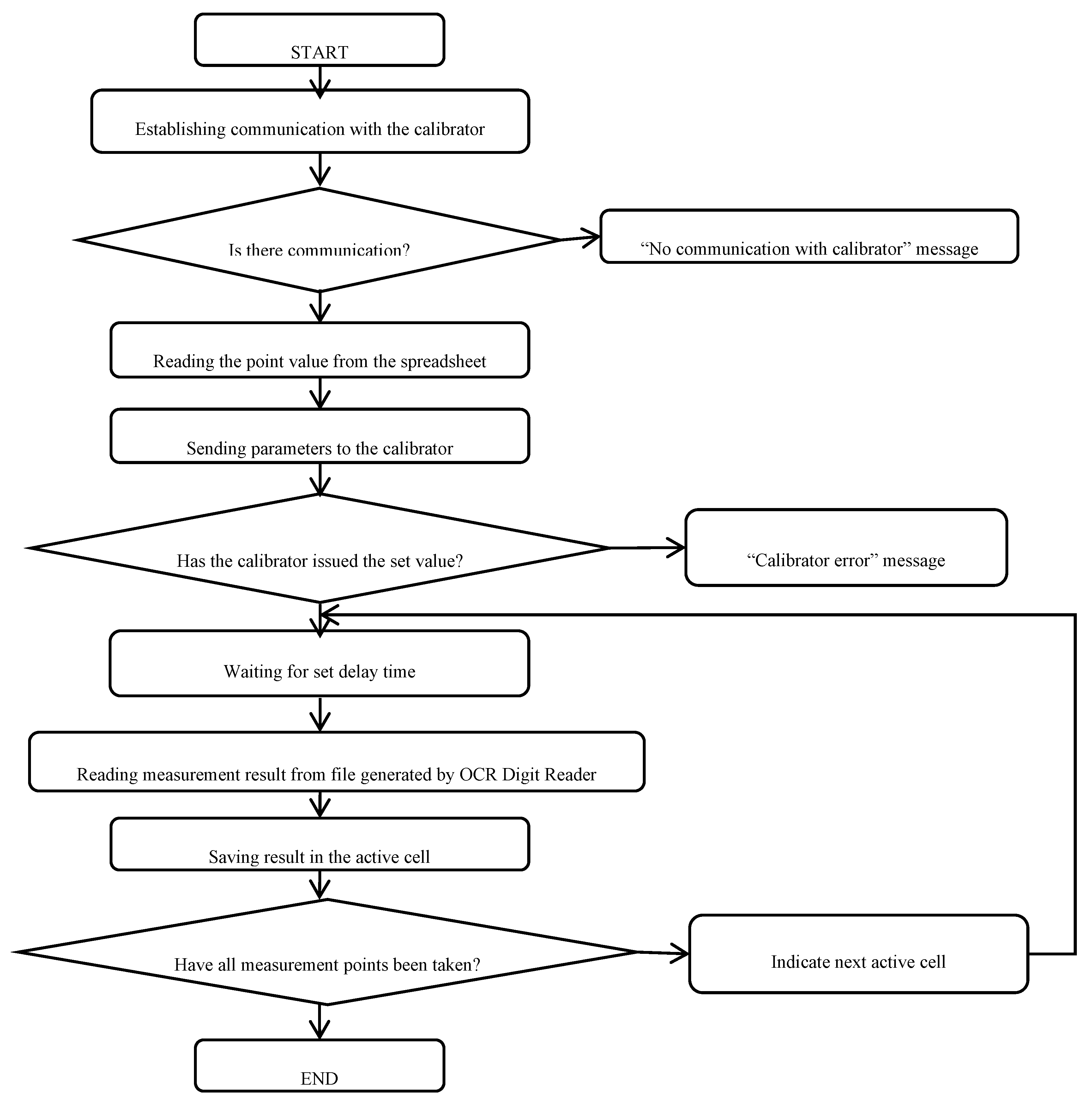 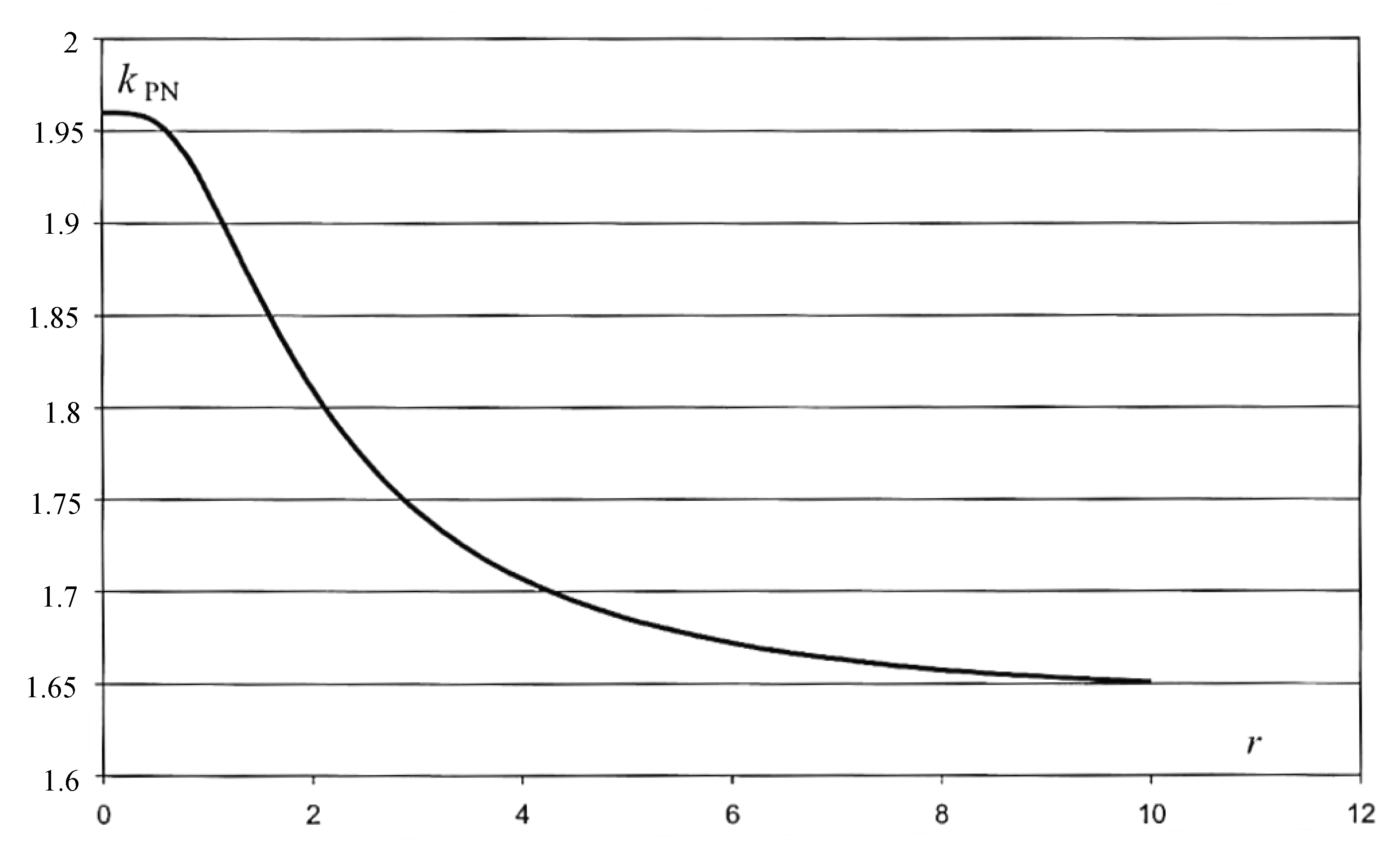