Health Promotion for Childhood Obesity: An Approach Based on Self-Tracking of Data
Previous Article in Journal

A Proposed Method to Assess the Mechanical Properties of Treadmill Surfaces

The search for the optimal physical condition and the monitoring of physiological parameters in athletes have always been topics of study for researchers, trainers and coaches [1,2]. Water immersion has been used in both sports and rehabilitation for several decades and its effects on several physiological parameters, including inflammatory and metabolic markers, blood flow and nerve transmission are well-documented in the literature [3,4,5,6,7,8]. The effects of water immersion appear as thermal, mechanical and chemical effects, either alone or as mixed effects [9]. Hydrostatic pressure is associated with several changes, including a decrease in muscle activation and muscle strength as well as a fluid shift from the intracellular to the intravascular space, which may assist the process of eliminating metabolic wasting [4,7]. The application of heat is typically explained by its effects on vasodilation and increase in blood flow and metabolism, which should cause healing to occur more quickly [9]. On the other hand, cold is frequently used in sports rehabilitation because of the reduction of pain, swelling and inflammation associated with it [4,7]. Although these physiological changes are well-known, the effects of water temperature on muscle mechanical properties has been studied less.
Muscle contractile properties (velocity of contraction, time to maximal contraction, fiber composition, etc.) are a key determinant of strength and power [10]. Several tools have been developed depending on the assessed properties, such as torque recordings, mechanomyography, magnetic resonance, muscle biopsy and performance variables, such as the countermovement jump test (CMJ) [10,11]. In recent years, tensiomyography (TMG) has been proposed as an alternative method to assess muscle contractile properties, including muscle stiffness, contraction speed, muscle composition and muscle fatigue in different muscles (biceps femoris, vastus lateralis, rectus femoris, among others) [12,13,14,15,16]. This method is based on the assumption that the radial muscle belly displacement detected by a digital sensor represents the enlargement of the muscle surface due to contraction, which will be proportional to muscle force [13,16]. Although TMG does not measure muscle strength directly, some studies have shown a good correlation with the estimated one maximum repetition (1RM) and maximal voluntary isometric contraction [10,17]. On the other hand, as contraction time depends on the type of fiber composition, this parameter has been effectively used to assess muscle composition [13]. The advantages of TMG over other methods to assess muscle contractile properties include the ability to isolate the action of a single muscle group and the fact that it doesn’t rely on voluntary muscle contraction [12,18]. These features are especially relevant for rehabilitation purposes as well as to objectively discern between effective muscle contraction and potential psychological interferences, such as readiness or fatigue, that might influence muscle performance. In terms of reliability, TMG has shown excellent inter-rater reliability (intra-class correlation coefficient ICC ranging from 0.77–0.97) [19,20] as well as between day repeatability (ICC = 0.94) [21] and reproducibility at different sensor positions [22]. According to this, it has been recommended as a consistent method to assess muscle contractile properties [18].
To date, very few studies have analysed how water immersion may affect the contractile properties of the striated muscle using TMG [22], with no studies exploring the effects of different water temperatures. Therefore, the aim of this study was two-fold: (1) to examine the effects of warm-water immersion (WWI) and cold-water immersion (CWI) on the biceps femoris’ (BF) contractile properties using TMG and (2) to explore the interaction between water temperature and time post-exposure. Given the aforementioned effects of water temperature on nerve transmission, we hypothesized that WWI would elicit an increase in radial muscle displacement, while the opposite would be observed after CWI, especially during the first minutes after exposure.

We conducted a cross-over single-arm pilot study at a Laboratory for Athlete High Performance over a period of two months (October and November).

Fifteen healthy men were screened for inclusion. To participate in the study, the only inclusion criteria were to engage at least in 10 h of exercise training per week. Participants were excluded (A) if they presented any significant neuromuscular, musculoskeletal, traumatic injury or any other impairment in the assessed limb over the previous six months (such as fibrillary rupture, ligament sprain, fracture, dislocation or meniscus injury) and (B) if they reported extenuating exercise or consumption of caffeinated-drinks in the 48 h previous to any of the assessments. Three subjects were excluded because one had suffered an ankle sprain during the previous 6 months and two had consumed some sort of energy-drink in the 48-h previous to the first evaluation. Thus, twelve men participated in the study.
The sample size was calculated based on a previous study published by García-Manso et al. [23] where the authors reported a decrease of 1.75 mm in maximal muscle displacement after cold-water immersion. With a statistical power of 80% and a confidence interval of 95%, assuming a standard deviation of 2.27 mm, we needed to recruit at least 10 subjects.
The project was conducted in accordance with the guidelines of the declaration of Helsinki, and was approved by the local Bioethics Committee (Approval code: 25027). All subjects were properly informed about the study’s purpose, and written consent was obtained before any formal testing.

The study was conducted on two different days separated by one week. Each day, participants underwent the same evaluations. First, anthropometric measurements were taken according to the International Society for Advanced of Kinanthropometry (ISAK) [24]. A baseline TMG measurement was performed followed by a 20-min cold- or warm-water immersion. Post-immersion TMG measurements were taken immediately post-immersion and were repeated subsequently at 10, 20, 30 and 40 min thereafter. Allocation to CWI or WWI was performed randomly using a random generator program (Epidat 4.2 Xunta de Galicia) and results were placed in opaque envelopes by a third person not directly involved in the study. Between measurements, participants rested on a bench covered with a bathrobe and sweatshirt (Figure 1).

TMG measurements were taken in a laboratory at 22 ± 1 °C temperature. Measurements were registered with participants in a prone position with knee flexed at 20° (0° corresponding to full extension). The measured limb was positioned with the ankle joint placed on a triangular foam pad to keep a fixed knee angle. Rotation of the hip was maintained in a neutral position and the joint was left loose to avoid an isometric contraction (Figure 2). A digital displacement transducer (GK 40, Panoptik d.o.o., Ljubljana, Slovenia) which incorporates a spring of 0.17 N mm−1, providing an initial pressure of 1.5 × 10−2 N/mm2, was set perpendicular to the muscle belly to obtain BF radial displacement [25]. Sensor location was determined anatomically according to the references provided by Delagi et al. [26]. The investigator asked the participant to bend the knee from the resting position while applying resistance to locate the muscle belly borders, and subsequently marked the midpoint of the imaginary line between the fibula head and the ischial tuberosity with a dermatological pen [25]. Two square-shaped (4.5 × 4.5 cm) 2 mm-thick self-adhesive electrodes (RM 4545 Rehab Medic®, Barcelona, Spain) were placed symmetrically distal and proximal to the sensor tip (3 cm each way) and a TMG-S1 stimulator (EMF-Furlan I Co. d.o.o., Ljubljana, Slovenia) was used. Electrical stimulation was provided by means of a single square pulse of 1 ms, and intensity was initially set at 50 mA and increased 10 mA every 10−15 s until no further change in Dm was observed or maximal stimulator output was achieved (110 mA) [19,27]. The positive electrode was placed proximally while the negative electrode was placed distally. Baseline parameters were obtained after two consecutive measurement protocols separated by 5 min, and mean values were used for analysis.

Water immersion was performed with participants seated in a Jamaica massage bath tub of 250 L capacity, with their back supported on the back rest, arms relaxed outside the tub and legs placed semi-flexed on a weighted physiotherapy wedge and water level up to the fourth lumbar vertebra. Participants were asked not to eat or drink during the 20-min immersion. Water temperature was monitored continuously using a water thermometer to maintain a 10 ± 1 °C and 42 ± 2 °C during cold- and warm-water immersion, respectively, while room temperature was kept at 22 ± 1 °C.

The main outcomes of the study were changes in TMG parameters (Dm and Tc) pre- to post-immersion according to water temperature. TMG parameters were obtained during BF contraction from the displacement-time curve, as described by Valenčič et al. 1997 [12]. Maximal displacement in millimitres (Dm) and contraction time in seconds (Tc) measured as the time from 10% to 90% of the maximal displacement curve, are the easiest parameters to reproduce (intra-class correlation coefficient 0.82–0.99 and 0.70–0.99, respectively) and more reliable [19,20,22]; hence we only selected those for analysis purposes. Since Dm is believed to represent the contraction of the muscle, lower scores are indicative of a high degree of muscle tone or muscle stiffness [14,17]. Similarly, contraction time (Tc) has been found to be strongly correlated to muscle type distribution, with lower Tc values being found in fast-contracting muscles [25].

A descriptive analysis of the main categorical and continuous variables was performed initially, prior to further analysis. Continuous variables are expressed in mean and standard deviation (SD) while categorical variables are represented in absolute values and corresponding percentages. Distribution was assessed for every continuous variable using the Shapiro–Wilk test. Log10 transformation was performed when variables were not normally distributed. A repeated-measures analysis of variance (ANOVA) was performed with time (PRE, POST, POST10′, POST20′, POST30′, and POST40′) as within-subject variables, and temperature (cold water and warm water) as the between-subject factor. When a significant F ratio was obtained, a Bonferroni post hoc test was used to evaluate time and temperature differences. Partial eta-squared effect sizes were also calculated to account for the effect of time and temperature on both Dm and Tc. Statistical analysis was performed using the statistical software SPSS v.21, IBM® (IBM Corporation, Chicago, IL, USA), with a statistically significant level set at <0.01 according to the Bonferroni correction for multiple comparisons.

In summary, our results indicate that WWI for 20 min results in a significant increase in muscle displacement 40 min post-exposure which, according to the literature, suggests a decrease in muscle stiffness. In addition, CWI decreased muscle displacement 10 min post immersion, suggesting a short-term increase in muscle stiffness. These findings should be taken into consideration when applying CWI as a recovery strategy, especially if exercise is going to resume shortly thereafter. Future studies involving both men and women are needed as well as studies considering immersion in thermoneutral water, contrast therapy or kneipping as control group to corroborate our findings and to make assumptions for field and clinical practice. 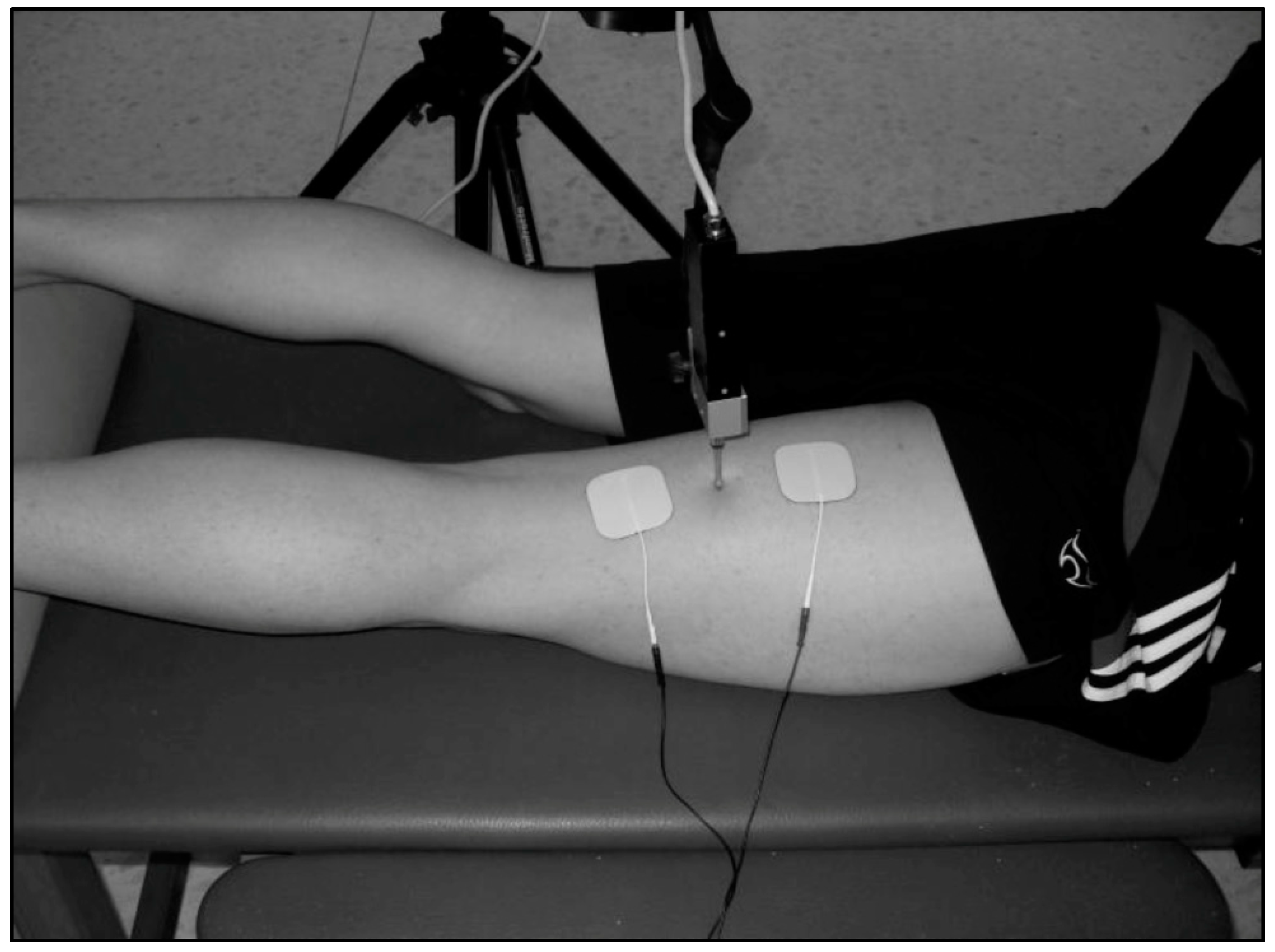 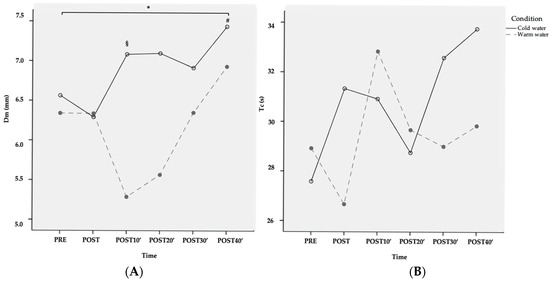