The study selected Nanjing, the provincial capital of Jiangsu province of China, as the study area (Figure 1). Among the 11 districts under the jurisdiction of Nanjing, the main urban area, such as Gulou and Xuanwu, have relatively advanced economic development, while other administrative regions such as Lishui and Gaochun have remote geographical locations and relatively weak economic development. Through utilizing the characteristics of the high spatial heterogeneity of Nanjing’s regional development level, the broad applicability of PLANUI in regions with different development levels can be verified.

Previous studies [18,19,20,21,22,23,24,25,26,30] proved that POI data and LST data are suitable for the extraction of urban built-up areas and that combining the two with NTL data for the study of the extraction of urban built-up areas is feasible. Therefore, this paper combined NTL, POI, and LST data to propose PLANUI. After referring to related researches [14,25,31], the three data are given equal weight. PLANUI aims to make up the shortcomings of low spatial resolution and blooming effect of NTL images with the help of POI data and LST data, to obtain more accurate urban built-up area results. Based on the fact that urban built-up areas have generally higher LST values and POI density than other land types, PLANUI can enhance the signals of urban built-up areas and weaken the interference light signals of non-built-up areas, to improve the accuracy of the urban built-up areas extracted. Since the NTL DN (digital number) values, the POI density values, and the LST values have significant positive correlations with urban built-up areas, the “average value method” was chosen to establish PLANUI to utilize the positive correlation for the ideal results. The geometric average value in the “average value method” was selected for the following considerations: Firstly, the magnitude difference between the DN value of NTL, the kernel density value of POI, and the value of LST is tremendous. The geometric mean value can eliminate the impact of this difference and integrate the advantages of the three. Secondly, there are many noise points in the NTL images, which have higher DN values than actual. There are few or no points of interest near the noise points, so the POI kernel density value of the points approach zero. At the same time, the LST values at the points are also usually low. The geometric mean can use the POI kernel density values and LST values of the noise points to reduce the influence of the abnormal DN values on the calculation result of PLANUI. Thereby, it can avoid some areas with noise points being mistakenly extracted as urban built-up areas. According to the same principle, it can reduce the part of the results that are incorrectly extracted, such as roads and railways outside urban built areas. Thirdly, the urban built-up areas with weak light signals have a serious problem of missing information in the process of extraction. The DN values of NTL are low in areas with low economic development. In the process of extracting urban built-up areas using NTL images, these areas are easily overlooked, resulting in many missing parts in the extraction results. However, these regions have high POI and LST values as other regions. Therefore, the POI and LST values can be used to enhance the signals of urban built-up areas in the areas, and then make up the missing built-up areas. Fourthly, one of the characteristics of the geometric mean is that it is less affected by extreme values, which can correct the abnormal light values. where represents the DN value of point i, represents the POI kernel density value of point i, and is LST value at point i. In this paper, the PLANUI includes the LJ-PLANUI and the NPP-PLANUI according to the combined NTL data (Figure 3).

The original NTL and LST data were preprocessed by necessary steps to avoid the abnormal pixels influencing the final results. This study used the method of precise geometric correction proposed by Jiang et al. [28], which utilizes distributed ground control points (GCPs) and Landsat 8 OLI to conduct the ortho-rectification, to correct the Luojia 1-01 images. In addition, the outliers of the LST data were removed by the quality control flags [25].
Compared with POI data, NTL and LST data are easy to preprocess before constructing PLANUI. It is challenging to obtain rational data of POI density. Therefore, kernel density estimation was selected to get the POI probability density in this paper. The advantage of this method is that it is not affected by grid size and position [32], so it can obtain high-quality POI kernel density estimation data. Kernel density estimation takes a regular area with a specific bandwidth near any point as the range of the density calculation and analyzes the spatial distribution status of the research object through the calculation results. The weight is given according to the distance from the center point. The weight of the data points close to the center point in the calculation area is relatively high. Otherwise it is low. So, the results obtained of all points in the study area are the weighted average density values [33]. The formula for calculating the kernel density is as follow: where represents the weight of point j, represents the Euclidean distance between point i and point j, R represents the bandwidth (< R) of regular area, and n represents the quantity of point j in the regular area.
The rational choice of bandwidth R according to the research question has a crucial impact on the results [34]. Because this paper needs to combine the POI kernel density data with two night-time light data with different resolutions, an appropriate bandwidth R should be selected. According to the current research results [31], a bandwidth of 1000 m is selected, and at the same time, one-tenth of the bandwidth is used as the side length of the resulting grid unit. The result is shown in Figure 2d.

To fully evaluate the proposed index PLANUI, the widely used index VANUI was introduced as a comparison term. VANUI is a standardized urban index adjusted by vegetation proposed by Zhang et al. [16]. On the basis that there is a negative correlation between vegetation and urban surface, MODIS NDVI is used to weaken the NTL blooming effect and strengthen the characteristics of urban cores at night. The VANUI value of the core urban area approaches 1, and the VANUI value of non-urban and non-illuminated areas approaches 0, so the VANUI is widely used in the extraction of urban built-up areas. in this paper, the VANUI index includes the LJ-VANUI index and the NPP-VANUI index, according to the combined NTL data.

4.2.1. Comparison between Extraction Results and the Reference

5.2. Difference for the Indexes Based on Luojia-1 and NPP/VIIRS

The applicability of PLANUI to different NTL data is great. By contrast, LJ-PLANUI performs better than NPP-PLANUI, in terms of the spatial distribution of built-up areas and extraction accuracy. The experimental results of Luojia 1-01 and NPP/VIIRS showed that they have different shortcomings. The results extracted from the NPP/VIIRS images have a significant blooming effect. They are excessively concentrated in the main urban area, has insufficient information on the boundary and details, and have many missing parts in the administrative area with a low level of development. Although the extraction results from the Luojia 1-01 images can well reflect the entire urban built-up areas of Nanjing, there remains a problem with many holes and misinformation. The PLANUI based on NTL images at two different resolutions achieved good results. The LJ-PLANUI can fill excessive holes and add missing parts, and increase connectivity and integrity of the urban built-up areas. The NPP-PLANUI can solve problems such as the out-of-bounds boundary caused by the blooming effect by supplementing the boundary information, which guarantees the complexity of urban built-up areas. Therefore, PLANUI is suitable for both NTL with different resolutions and regions with significant differences in development. Due to the higher spatial resolution of Luojia 1-01 than NPP/VIIRS, LJ-PLANUI performs better than NPP-PLANUI in the details of the interior and boundary of the urban built-up areas (Figure 5). The urban built-up areas extracted from LJ-PLANUI are more complete and accurate (Figure 6). It can be seen from Table 2 that the accuracy of the results extracted based on the two indices is relatively high and the difference between the two is generally small. Only in Gaochun District, the extraction accuracy of LJ-PLANUI is significantly higher than that of NPP-PLANUI, which shows that LJ-PLANUI is more suitable for areas with low economic development than NPP-PLANUI.

As the urbanization develops rapidly, the challenge becomes how to make a reasonable policy for urban planning, to ensure the orderly expansion of the city to avoid rapid population growth, environmental pollution and resource shortage [41,42,43,44]. Accurate data of urban built-up areas are necessary for urban planning [36,45], so it is very important to extract urban built-up areas effectively. The extraction results from PLANUI has advantages of high precision and consistency with the reference built-up area. In addition, PLANUI is suitable for the extraction in the regions with different levels of development, greatly improving extraction efficiency and accuracy. Therefore, PLANUI can be applied to urban planning and has certain guiding significance for urban expansion, urban structure, and urban governance. The positive correlation between POI, LST, and urban built-up areas, which PLANUI is based on, is more stable than the negative correlation of vegetation index. As a social and economic complex, the city has two basic characteristics, namely the agglomeration effect and scale effect, which can be reflected by the dynamic density of POI [18]. LST can reflect the phenomenon that the temperature in urban built-up areas is generally higher than that of vegetation, water bodies, or other land types [22,23]. It has a positive correlation with the distribution of urban built-up areas. The stability of the relationship between vegetation index and the urban built-up areas is affected by the following two points. First, in a short period of time, the urban vegetation cover changes in a large area. Most cities in China are in the stage of transformation, development, and construction. In a short period of time, large-scale land development and land use transformation are very common, which has a great impact on urban vegetation coverage. Second, not all regions urbanize through large-scale vegetation cover reduction. In suburban and desert cities in North America, such as Las Vegas and Nevada, vegetation for residential and commercial would increase in the process of urbanization [16]. Therefore, in theory, PLANUI is suitable for more cities than the index based on vegetation, which will be verified in the next study. From DMSP/LOS to NPP/VIIRS to Luojia 1-01, the development of NTL is characterized by the improvement of spatial resolution. In this trend, PLANUI is suitable for NTL with different resolutions, which provides a theoretical basis to introduce more NTL with high spatial resolution into PLANUI. It can be seen that PLANUI has a broad application space in the field of urban built-up area extraction from NTL in the future.

This study proposed the PLANUI, a new index combining NTL, POI, and LST, to overcome the limitations of the blooming effect and low resolution of NTL data and to characterize urban built-up areas to improve the accuracy of the extraction. 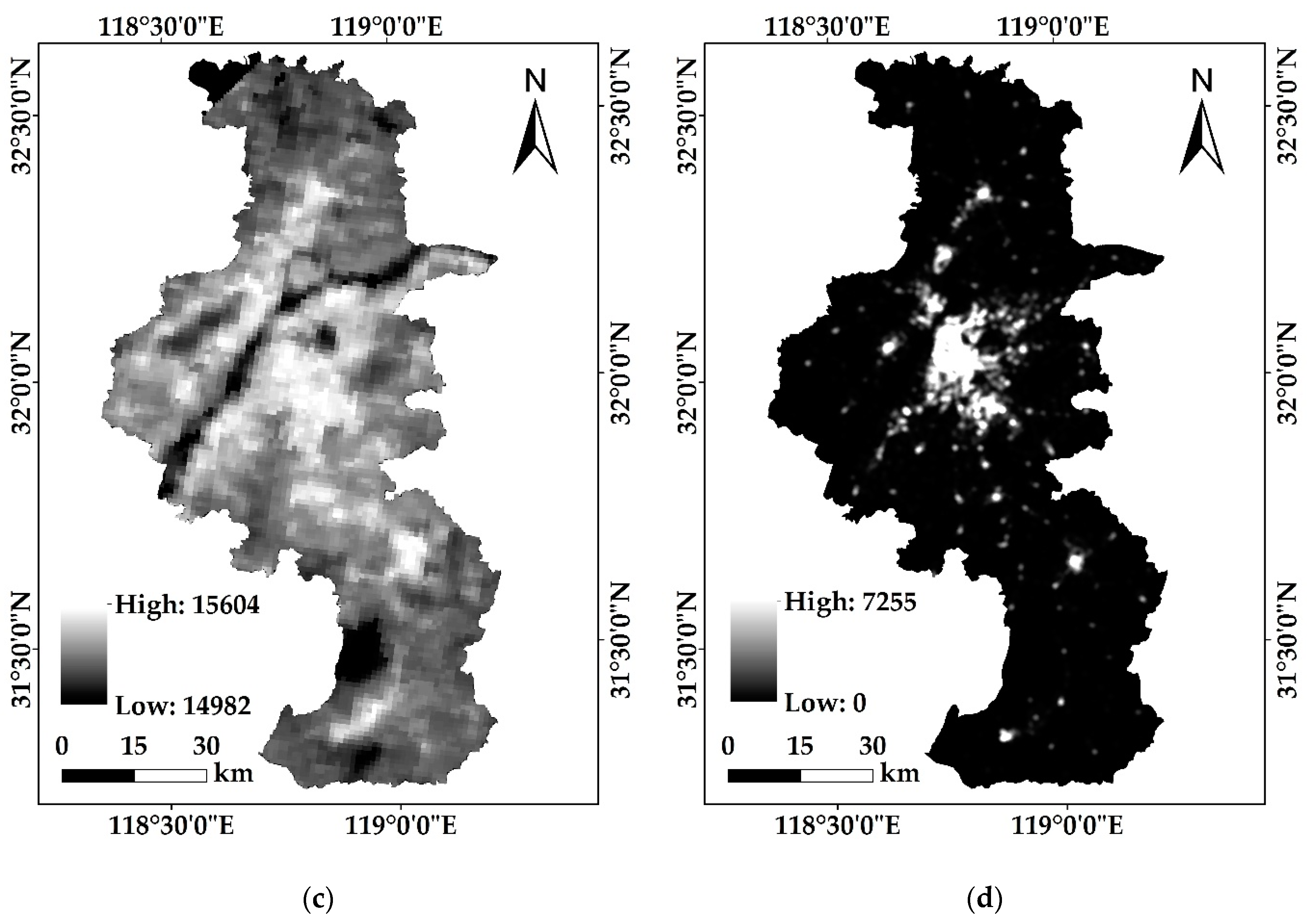 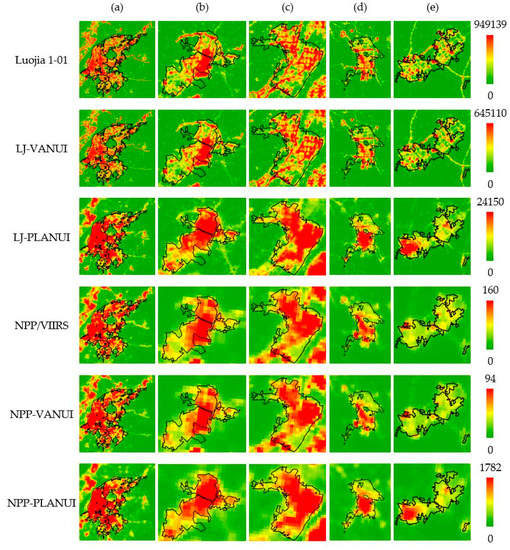 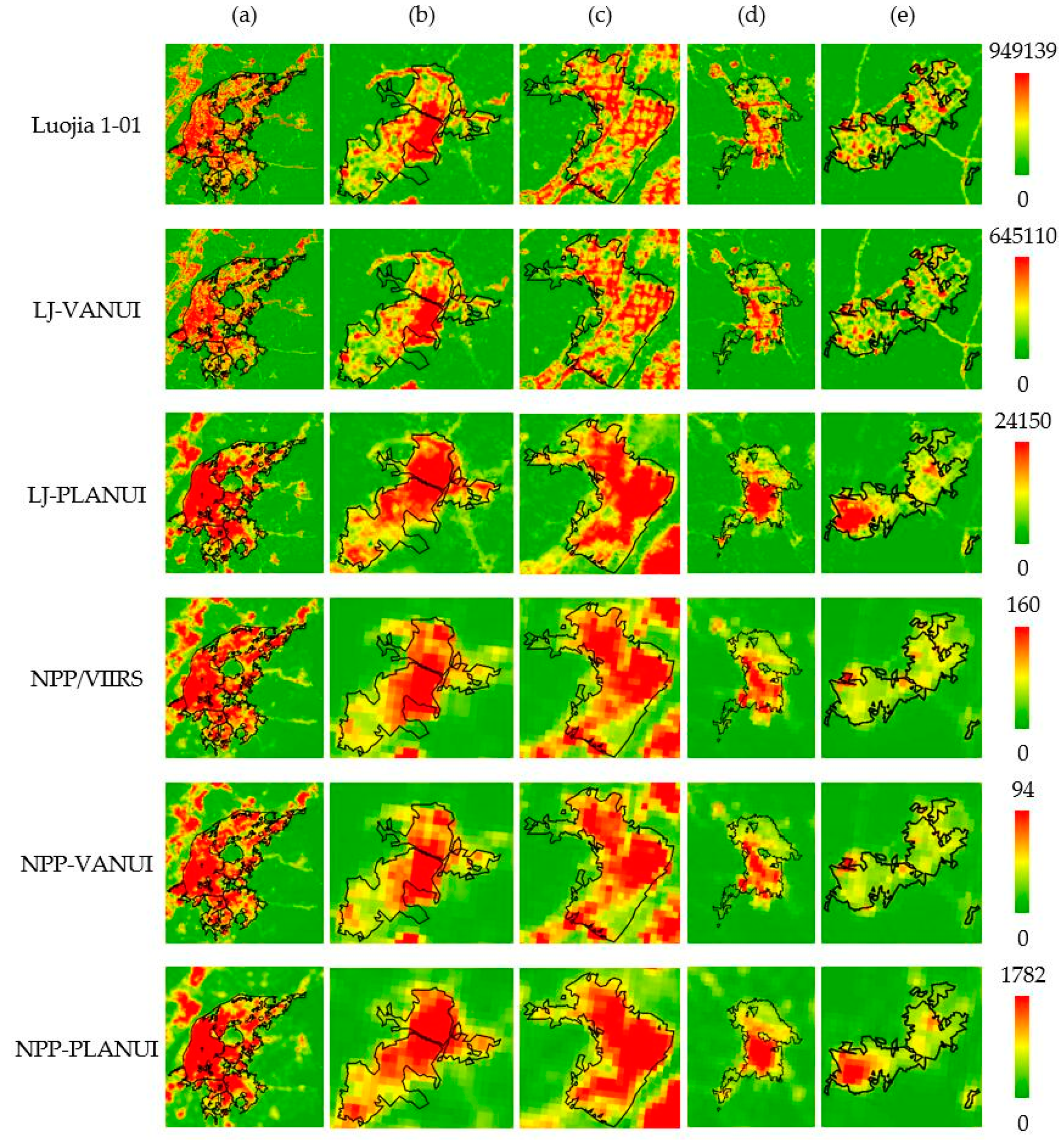 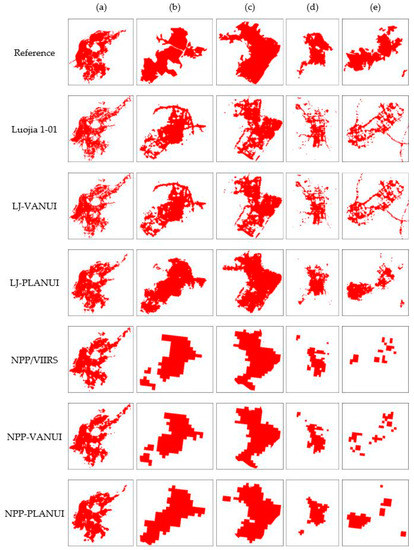 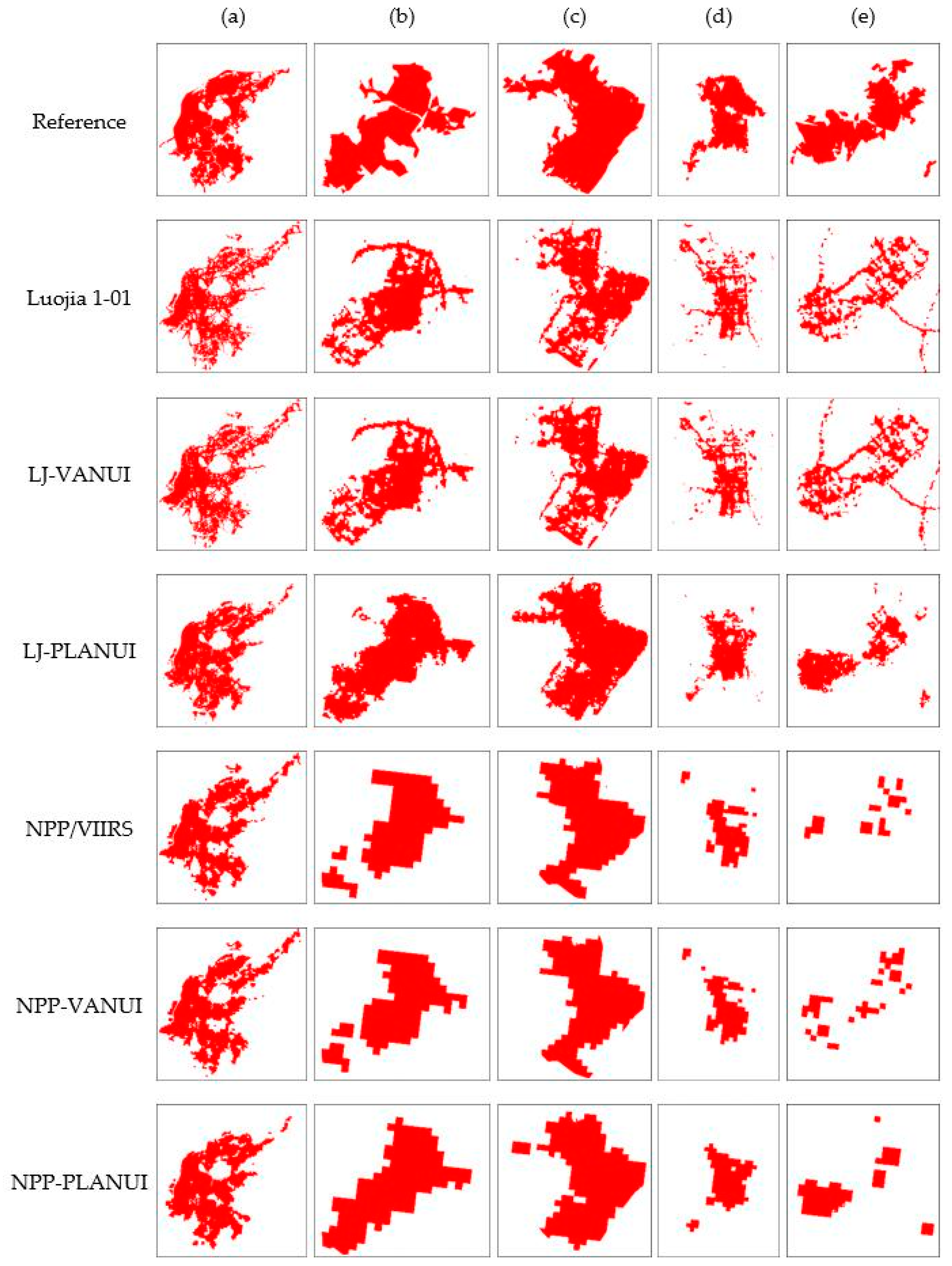 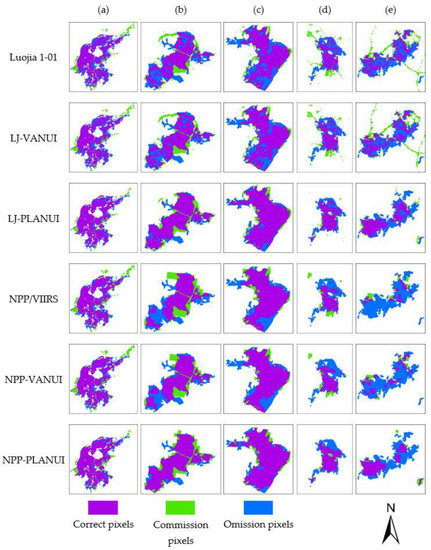 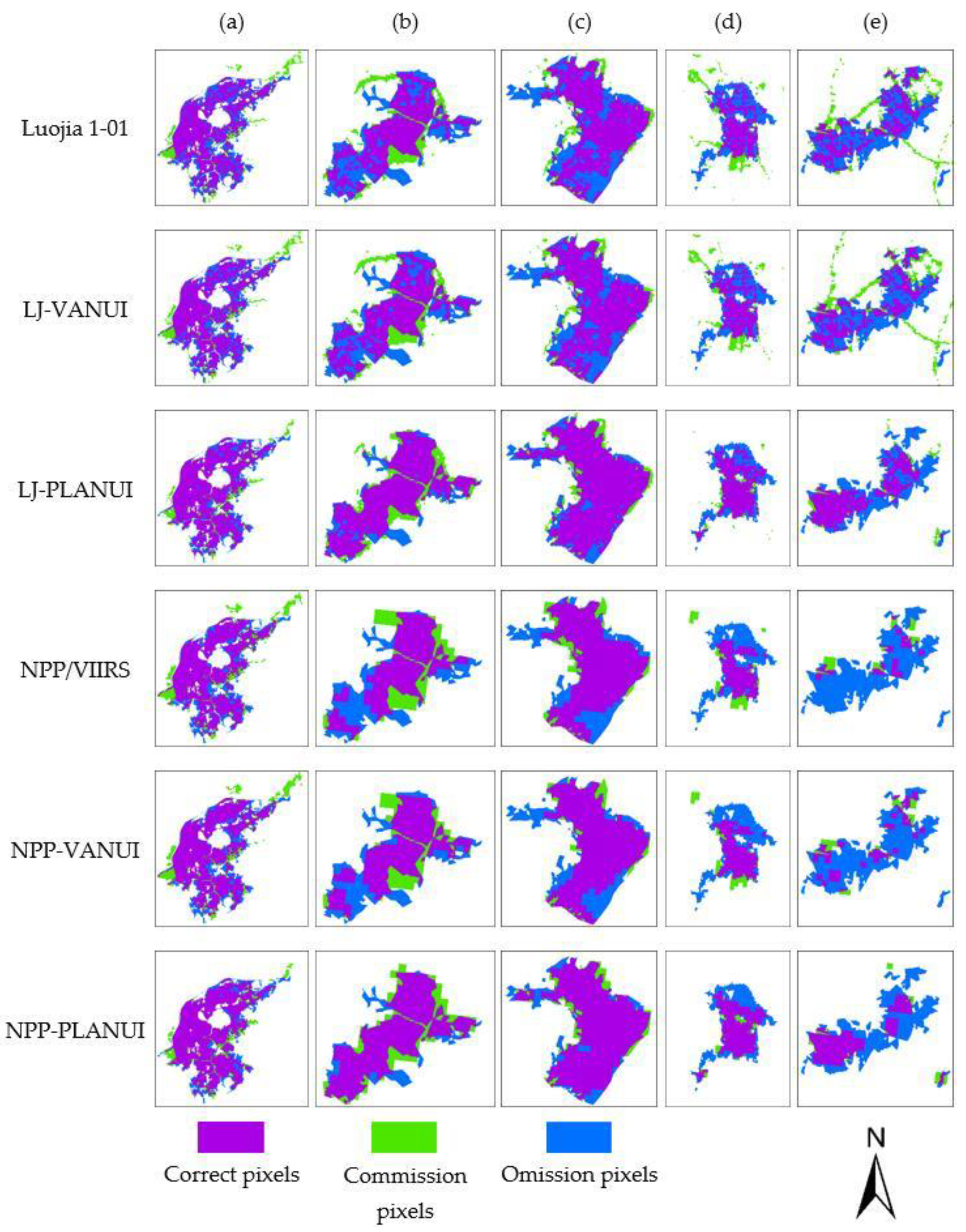 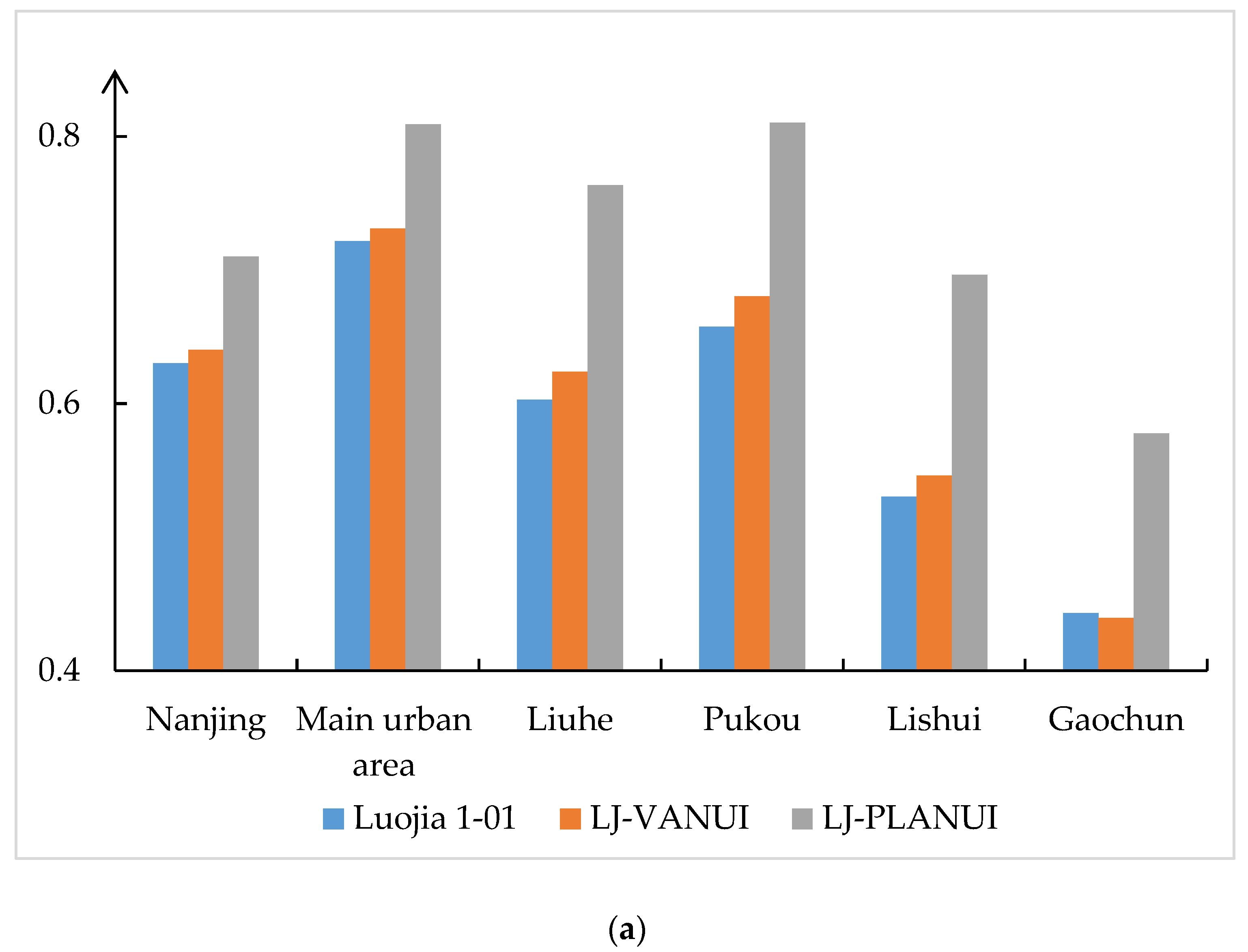 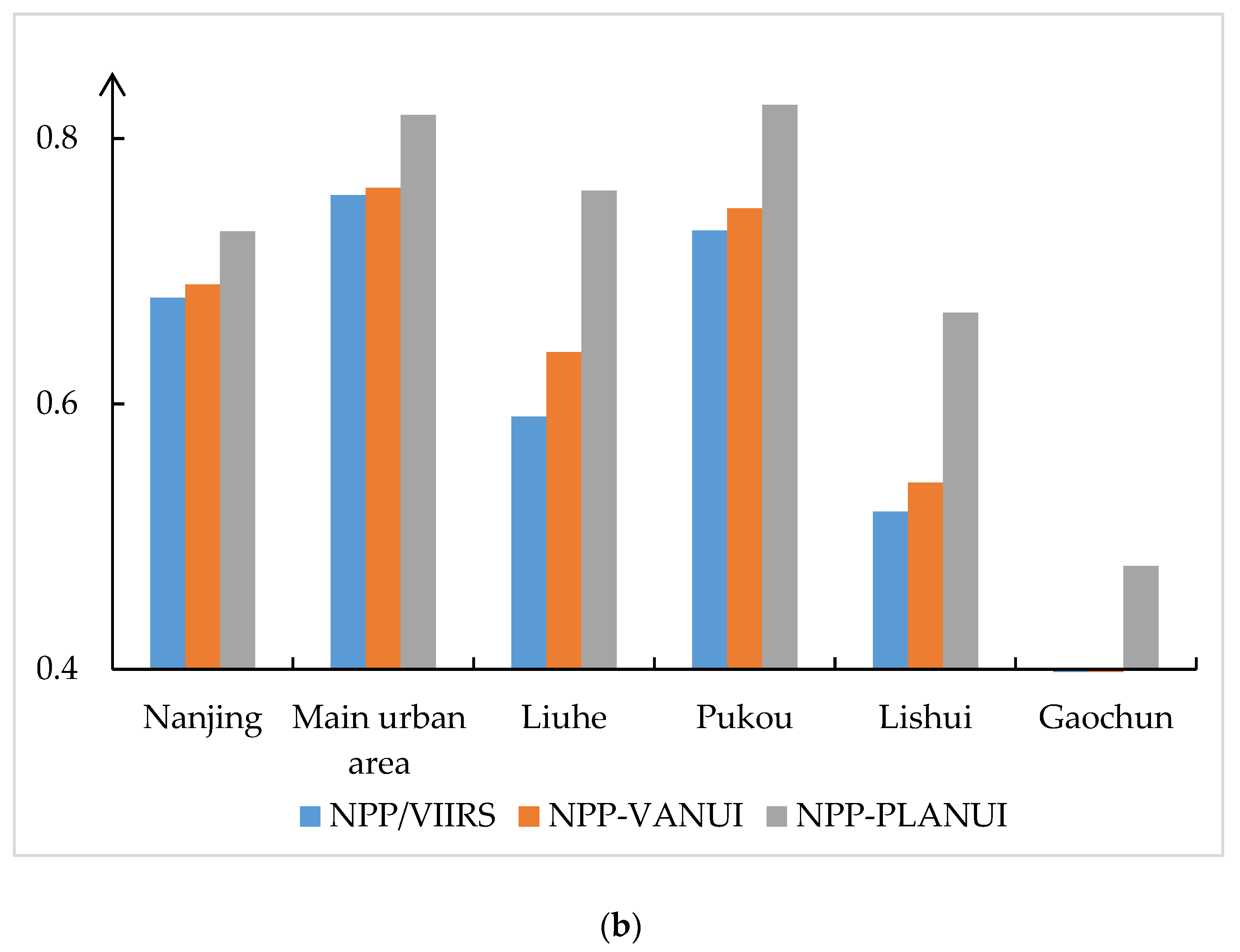 Table 2. Accuracy assessment on the extraction results.
Table 2. Accuracy assessment on the extraction results.
© 2020 by the authors. Licensee MDPI, Basel, Switzerland. This article is an open access article distributed under the terms and conditions of the Creative Commons Attribution (CC BY) license (http://creativecommons.org/licenses/by/4.0/).
We use cookies on our website to ensure you get the best experience. Read more about our cookies here.
Accept
We have just recently launched a new version of our website. Help us to further improve by taking part in this short 5 minute survey here. here.
Never show this again