The scenario considered in this research consists of one target whose coordinates are , one sound source and distributed receivers as shown in Figure 1. The receivers organized in the fashion of a star topology. The receiver is referred as CR, while the receivers are referred as NRs. The coordinates of the receivers are indicated as . We do not know the accurate locations of the receivers as they move with ocean currents. The signals depart from the sound source directly to the receivers are referred as direct signals ; while the signals which depart from the sound source, reflected by the target and received by the receiver are referred as the reflected signals . There are a large amount of research focus on the detection of the direct signals and the reflected signals [49,50,51]. We assume that the detection problem can be solved by the existing approaches, and focus on the target localization and time synchronization algorithm.
In order to estimate the target location , there are three aspects have to be considered. The first one is the varying underwater sound speed which results in the curve of USR. The second one is time synchronization. The third one is the uncertainties of the locations of the receivers. With the consideration of these three aspects, we employ four types of models: the sound speed and time delay models, the clock model, the uncertainty model of the receiver locations, and the time-of-arrival (TOA) measurement models.

The second aspect is the time synchronization. In this work, we assumed that all the NRs were fully asynchronous. The clock model can be stated aswhere and are the unknown clock skew and offset of the receiver , respectively. The symbol stands for the timestamp from the clock of the receiver w.r.t. standard time t. For simplicity, we stack all the clock skews and clock offsets into the vectors and , respectively.

2.3. The Uncertainty Model of the Receiver Locations

The double-gyre phenomena in large-scale ocean circulation is typical for the northern mid-latitude ocean basins [53]. It is quite dominant and persistent in oceans and consists of a sub-polar and a sub-tropical gyre. However, the double-gyre model is only suitable for large-scale ocean circulation. It cannot resolve local, small-scale flow disturbances properly. In addition to the double-gyre model, a small-scale gyre model is adapted in [53] to depict the local, small-scale background flow velocity (BFV) disturbances. In this paper, we adopt the ocean current model used in [53]where and are the large-scale and small-scale BFV model, respectively. We refer to [53] for more details of the ocean current model.

We considered the problem of underwater target localization and synchronization for the distributed SIMO sonar system. Firstly, we combined the direct signals and the broadcast signals by the receivers to carry out time synchronization. Sequentially, we localized the target with the estimated clock parameters and the TOAs of reflected signals.

Different from the situation of our previous work [4], there are uncertainties in the locations of the receivers. In order to reduce the influence of the uncertainties on the target localization, we estimate the clock skews of the receivers in conjunction with the locations of the receivers with EM algorithm. By combining (13)–(16), we havewhich give thatwhere denoting the noise. It follows from (11) and (17b) thatwhich can be combined aswhere denoting the noise. We combine (18) and (20) and represent it in the vector form aswhere denoting the parameter vector, the vector , and the vector denoting the noises. The measurements related to the target position are not included in (21). Therefore, (21) is independent on the target position. The covariance matrix of is of the formwhere , , . The vector is the observation which can be stated as The matrix denoting the observation coefficient matrix, where , , and . The entries of are related to the locations of the receivers which are not exactly known. In order to obtain a fixed observation matrix, we linearize the entries of by the Taylor expansion aswhere the vectors and are the Taylor expansion points of the propagation delays and , respectively. The vector is the Taylor points of the delay . The propagation delays , and . The vector can be approximated aswhere denoting the Taylor expansion point of . The vector is named as latent vector whose entries are latent variables. It can be expressed aswhere
The matrix collecting the partial derivatives of w.r.t. the locations of the receivers. Its submatrices can be expressed as
By substituting (23) into (21), we can modify (21) towhere , the set is termed complete data set. The parameter can be estimated if the complete data set is known. The EM algorithm can be utilized to estimate the latent vector firstly and the parameter vector sequentially.
We employ the EM algorithm to estimate the parameter vector by maximizing the expectation of the complete data logarithm likelihood function under the posterior distribution of the latent variables. The process consists of two steps named as the expectation step (E-step) and the maximization step (M-step). The purpose of the E-step is to estimate the latent variables by calculating the conditional expectation. The M-step aims to estimate the parameters with the estimated latent variables. They are explained as follows.
E-Step:
This step involves estimating the latent variables and formulating the objective function which can be stated aswhere l is the iteration index, and is the likelihood function which can be expressed as
Since the latent vector and the parameter vector are independent, the second term in the right hand side of (27) can be omitted as it is independent on . Therefore the function can be represented as
Through the derivation (see Appendix A), we rewrite the objective function aswhere the variables and can be calculated according to (A2) and (A4), respectively.
M-Step:
The maximization step attempts to find an optimal which maximizes the objective function . We take the first order derivative of the object function w.r.t. and set the result to zero, which gives
Define and where
The Equations (30) and (31) can be combined into the following vector formwhich gives the estimate of as
According to (23), errors have been introduced by the linearization of . In order to reduce the errors, we need to update by updating the Taylor expansion point . Assuming that during the first iteration, where . During the lth iteration, we set to reduce the difference between and the real locations of the receivers. Actually, during the l-th iteration, the latent vector collects the location offsets of the receivers, while is the estimate of the receivers’ locations. Therefore, we can estimate the locations of the receivers after the last iteration by . Denote as the estimate of , the clock skews of the receivers can be calculated as follows
The details of the EM based clock skews estimation algorithm are stated in Algorithm 1.
We remark that the uncertainties of the receiver locations are considered in two steps. In the first step, the statistical properties of the receiver locations are utilized to estimate the location offsets and obtain the estimate . In the second step, the estimate is used to update the receiver locations, which can reduces the influence of the uncertainties of the receiver locations.

3.1.2. Estimation of the Clock Offsets

We employ the WLS algorithm to estimate the clock offsets of the receivers. By substituting the estimates of the clock skews into (11), (17a) and (17b), we havewhere the vector can be stated asthe delay , . The coefficient matrix is defined as , where , and . The vector denoting the noise. Its covariance matrix can be expressed as , where , .
By applying the WLS algorithm, we can express the estimates of the clock offsets aswhere the weighted matrix is defined as .

By utilizing the estimates of the clock parameters, (12) can be rewritten aswhere . Define , and as the observation vector, the propagation delay vector and the noise vector, respectively. We rewrite (39) as
The covariance matrix of the noise is . It is hard to give an analytical solution of the estimation of the target’s location as the propagation delays and are nonlinear w.r.t. the variable . We employ the NWLS algorithm for the target localization. The iterative process can be expressed aswhere the weight matrix , and the matrix is the Jacobi matrix of w.r.t. . For the l-th iteration, the Jacobi matrix can be stated as

4.2.2. Performance of the Estimations of the Clock offsets of the Receivers

In the approximated weighted least squares (AWLS), the vector is assumed to be zero vector and the observation model (25) is approximated as
With AWLS algorithm, the estimate of is of the following form
In the weighted least squares (WLS) algorithm, we replace the latent vector with a noise vector and rewrite the observation model (25) aswhere . We initial the parameter vector as , and obtain the following iterative process with the WLS algorithmwhere . With the new estimate , we update the weight matrix and continue iterative process until , where is threshold of the iteration termination. 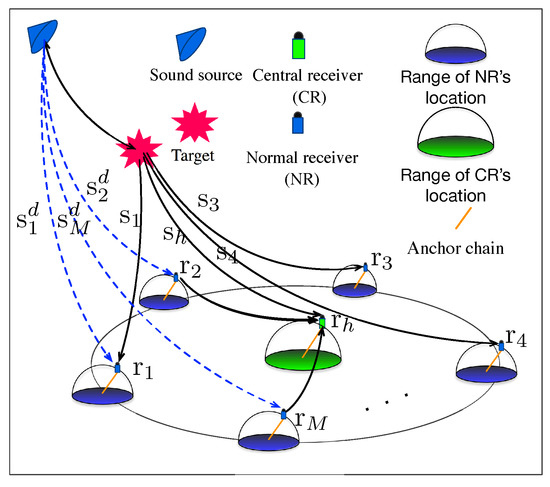 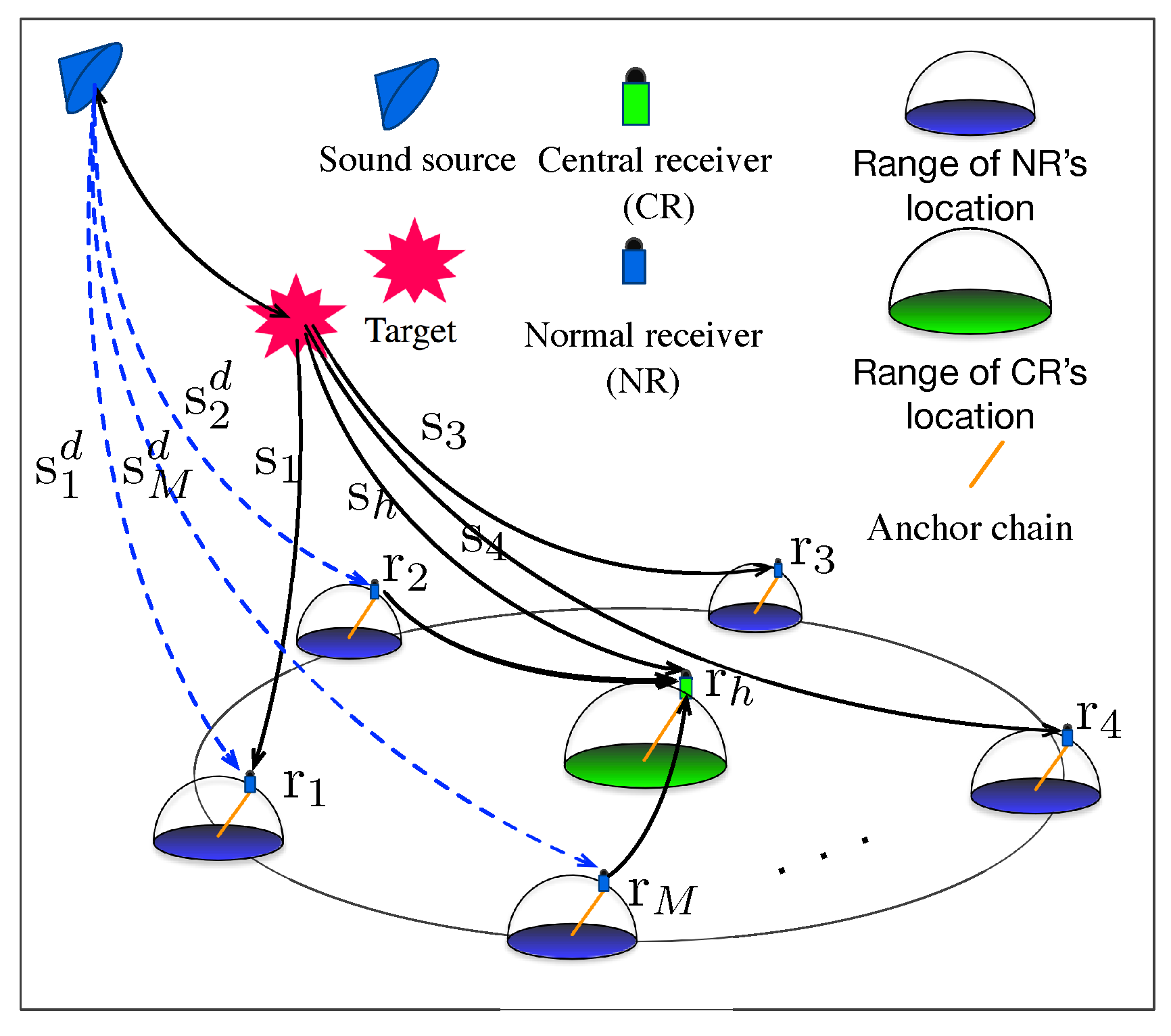 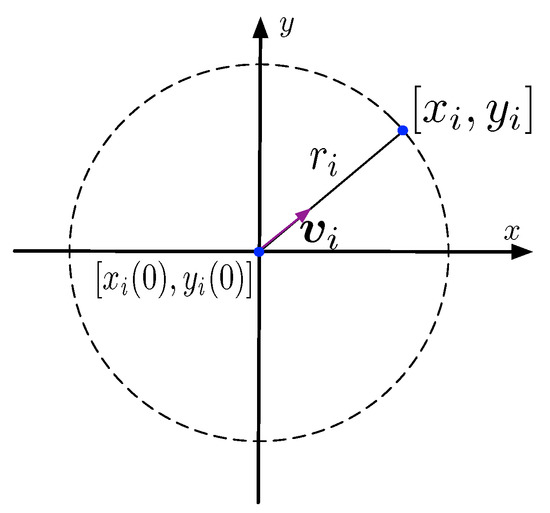 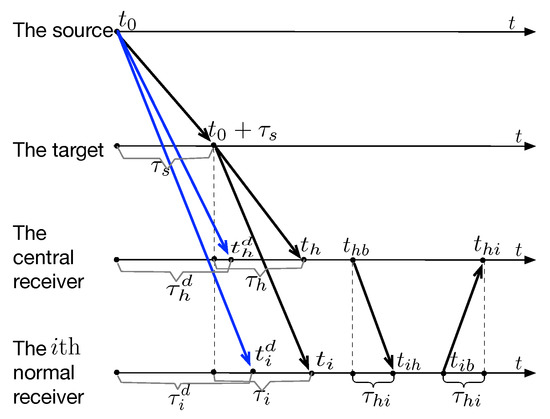 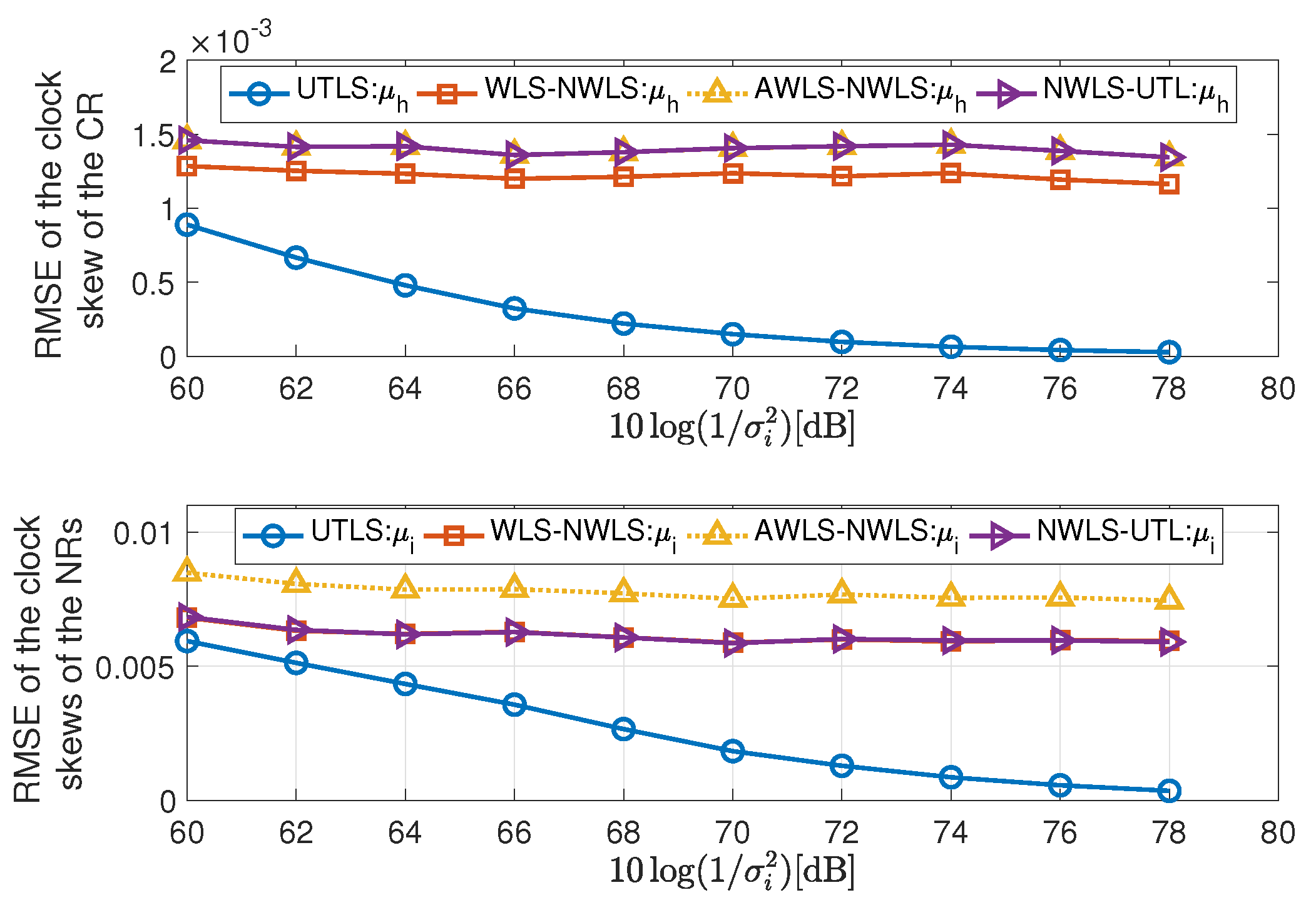 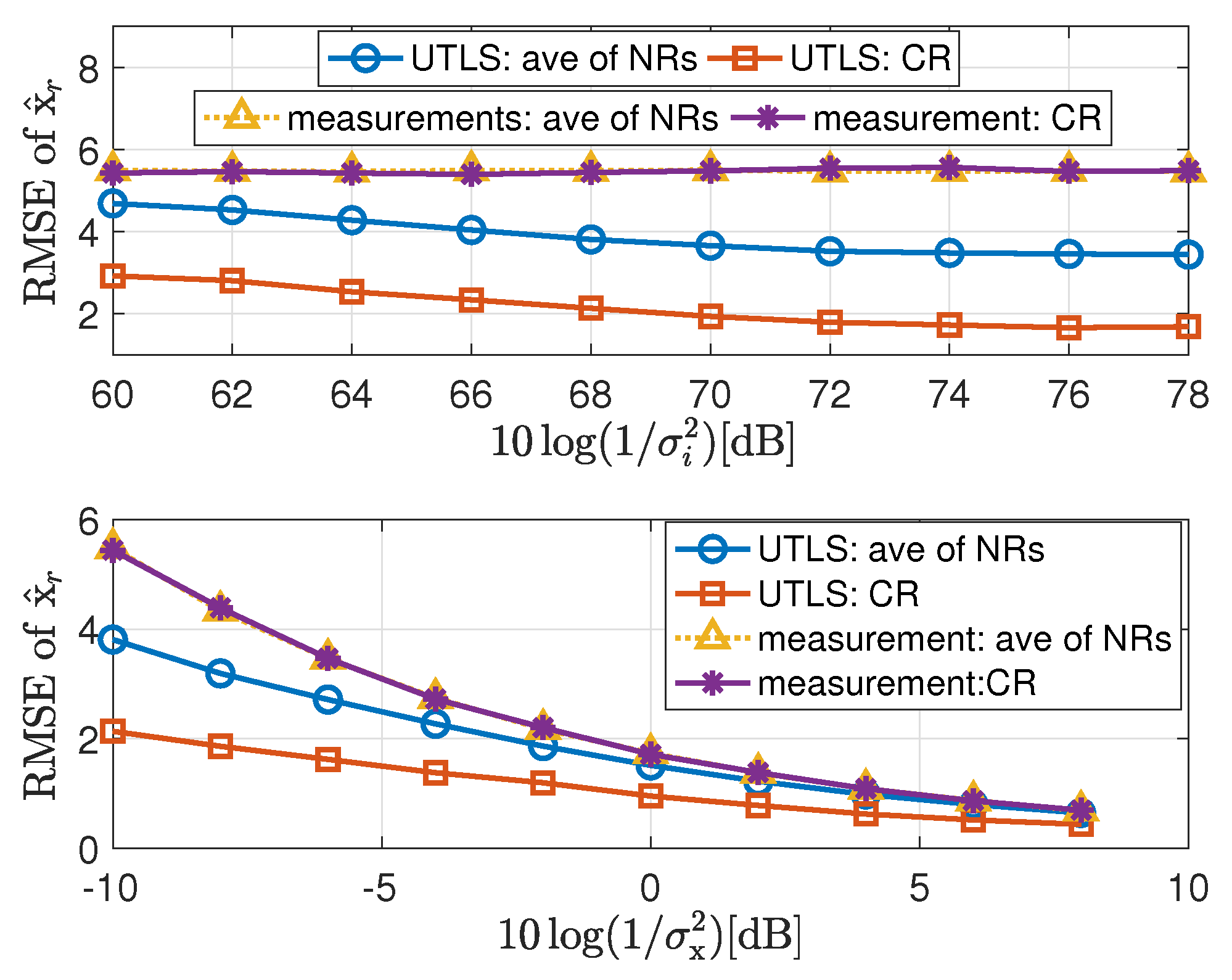 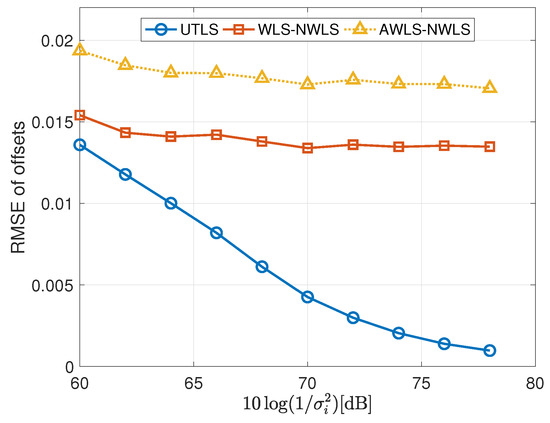 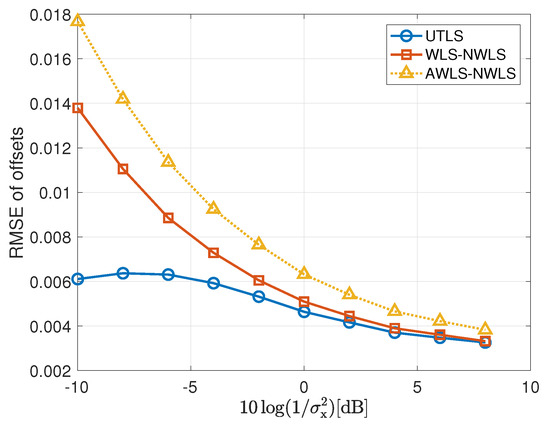 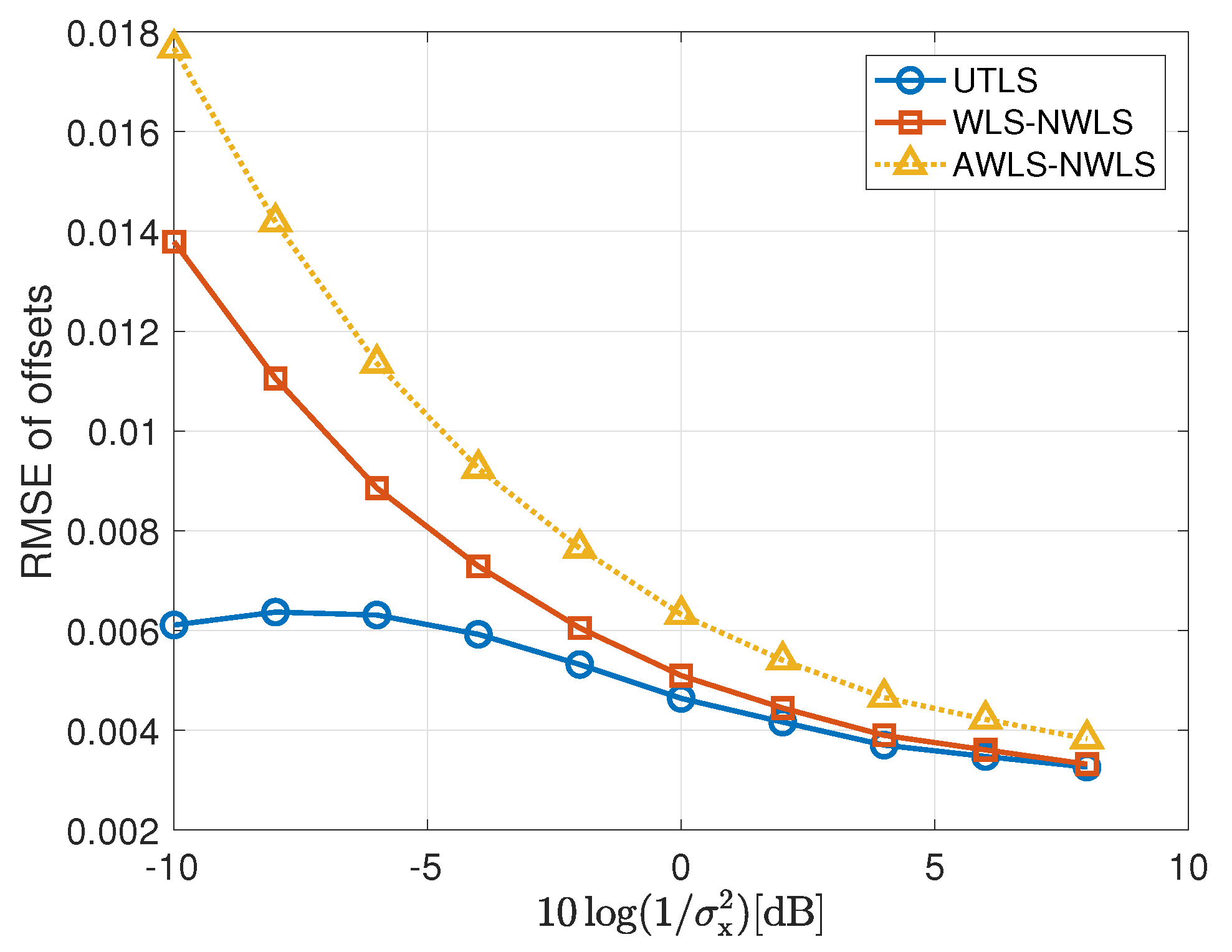 Table 1. The algorithms in the simulations.
Table 1. The algorithms in the simulations.
We use cookies on our website to ensure you get the best experience. Read more about our cookies here.
Accept
We have just recently launched a new version of our website. Help us to further improve by taking part in this short 5 minute survey here. here.
Never show this again