An image is an important method by which visual information is shared in modern society. However, it is difficult to obtain stereoscopic information using images reproduced by general image sensors. Human eyes can sense distance by accepting different visual information separately. However, distance information is not included in general camera systems due to their chips having only a single image sensor. Many studies have focused on realizing better stereoscopic images to obtain distance information. In 1870, David Brewster invented the Brewster stereoscope using the binocular parallax [1]. Subsequent research started realizing stereo vision in earnest. In other words, the acquisition of depth information is indispensable to producing stereoscopic images. In addition, depth information can both reproduce stereoscopic images and could be utilized in various fields, such as vehicle smart sensors, augmented reality, and indoor mapping [2,3,4].
Many researchers remain immersed in the development of three-dimensional (3D) imaging systems such as time-of-flight (TOF), light field, and stereo vision. Stereo vision is a method of creating stereoscopic images by combining each image acquired using two cameras [5,6,7,8,9]. The distance is calculated based on triangulation by finding the corresponding point of two cameras. TOF technology is a technique that emits an optical signal from an interlocked infrared source with a camera, measures the time for the emitted light to be reflected by the object and return, and thus obtains the depth information [10,11,12,13,14]. Therefore, an infrared source with high power consumption is necessary for the TOF system. The light field technique contains microlens arrays that are integrated at a small distance from the image sensor [15,16,17,18,19]. Microlens arrays are designed in positions in which the object’s image is focused on the camera lens. The light transferred from the object passes first passes through the camera lens. Simultaneously, the location on the camera lens through which the light passes is different depending on the object’s position. In other words, the output of the sensor due to the light passing through the microlens is proportional to the amount of light that corresponds to the location on the lens of the camera through which the light passes. Therefore, because the light field image sensor contains as many sets of disparity information as the number of microlenses, a stereoscopic image can be reproduced.
Recently, the miniaturization of portable devices, such as mobile phones and tablet PCs, in which CMOS image sensors (CISs) are integrated, has been performed with advancements in technology. This is due to advantages such as their small required area, easy portability, and low power consumption. Some of the disadvantages of the above 3D imaging system technology include the need for an infrared source that has high power consumption, the use of a plurality of cameras, and the sensor’s limited resolution depending on the number of microlenses. However, the proposed monochrome (MONO) CIS with offset pixel apertures (OPAs) is advantageous to acquire depth information using only one sensor and requires no infrared source. Furthermore, concerns regarding the loss of resolution caused by the number of microlenses, which serve as the light field system, is nonexistent.
This paper is organized as follows. The sensor’s architecture is described in Section 2. The measurement of the disparity depending on the distance and measurement of the chief ray angle (CRA) with OPA is described in Section 3. Finally, Section 4 contains the conclusions.

2. Architecture of the Sensor

This paper proposes obtaining depth information using a MONO CIS with OPA. The pixel of the proposed MONO CIS with OPA forms the conventional four-transistor (4-Tr) active pixel sensor (APS) as shown in Figure 1. Since the pixel of the proposed MONO CIS with OPA was based on the front side illumination (FSI) method, a pinned photodiode (PPD) structure is applied to reduce the defects generated on the surface of the photodiode (PD). The 4-Tr APS is composed of a transfer gate transistor (M1), a reset transistor (M2), a source follower (M3), and selection transistors (M4). The transistors (M1–4) are integrated into a single pixel. The operation principle of a pixel with the 4-Tr structure is described as follows: When the light is incident on the pixel, signal electrons are generated from the PD, and are then transferred to the floating diffusion (FD) node using M1. The signal electrons transferred from the PD are transmitted to M3.
When M4 is turned on, the signal electrons that pass through M3 are transferred to the readout circuit. The role of the M2 is to remove residual signal electrons from the FD node after transferring the signal electrons. In the proposed MONO CIS, the 4-Tr APS structure was applied to improve the sensitivity and conversion gain of the pixel. Moreover, to prevent crosstalk caused by the surrounding pixels, the pixel was isolated using the shallow trench isolation (STI) process, which was used to isolate a device by forming a trench in a semiconductor substrate and filling it with silicon oxide.
The proposed MONO CIS was designed using the 0.11 μm CIS process. The size of the pixel was 2.8 × 2.8 μm and the measurement was performed. The pixel array of the proposed MONO CIS with OPA was designed without color filters and the OPA was integrated at the pixel level.

The OPAs of the MONO CIS were designed using the first metal layer to create a rectangular opening area at only a certain position of the PD [20]. The disparity of images was determined by the width and position of the opening in the OPA. Figure 2a shows a comparison of the OPA patterns between the color and the MONO CIS using the OPA technique. A previously studied CIS with OPA had a color filter array (CFA) [21,22], the pattern of which was composed of the left-offset pixel aperture (LOPA), blue (B), red (R), and the right-offset pixel aperture (ROPA). The LOPA and ROPA were diagonally located in the pattern and the CIS had a one-pixel difference in the disparity, although the camera was focused. The MONO pattern was comprised of two pattern types, including just the LOPA and ROPA. The two types of pattern were divided into odd and even rows and were integrated into a pixel array. The proposed MONO CIS was fabricated without the color filters and the height of the pixel was low because the CFA was not necessary. This is an advantage of being able to improve the disparity due to the lower pixel height. The MONO pattern was formed in whole pixel arrays. Figure 2b shows the variation in the OPA width for measuring the performance difference. The width of the opening area in the OPA was in the range of 0.3–0.5 μm, and the extent of the offset was designed to have a distance in the range of 1.15–1.25 μm. The offset is defined as the distance between the center of the pixel and the center of the OPA.
Figure 3 shows the difference in the pixel height between the color CIS and the proposed MONO CIS. To confirm the difference in pixel height, a cross-section of the actual fabricated chip was taken using the focused ion beam (FIB) system. As shown in this figure, the proposed MONO CIS was made with the exception of the color filter process. The pixel height of the proposed MONO CIS was lower than the color CIS, which is the same as increasing the focal length. Therefore, the disparity was improved compared to the color CIS [23].

3.1. Measurement of the Disparity Depending on the Distance

3.2. Characteristics of the Proposed MONO CIS with OPA Depending on the CRA

In this study, we studied the effects of offset pixel aperture width on the performances of monochrome CMOS image sensors for depth extraction. The proposed MONO CIS with OPAs was designed and manufactured using a 0.11 µm CMOS process. The pixel array of the proposed MONO CIS with OPA was designed without color filters to produce a monochrome image. The OPA was designed using the first metal layer in the CIS process. In addition, the MONO pattern was composed of LOPA and ROPA pixels. The LOPA and ROPA were arranged on odd and even rows across the whole pixel array area.
In the experimental results, the degree of disparity increased as the distance increased between the camera system and the object. Further, because the two respective types of OPA exhibited different CRA characteristics, there was a difference in the disparity. Therefore, adjusting the position and width of the opening area enabled adjusting the difference in the CRA when designing the OPA pattern. Depth information could be acquired using the disparity that occurred in the pixel without requiring external factors, such as a high-power infrared source, plurality of cameras, etc. Therefore, this could be applied to the imaging device side that requires miniaturization, and stereoscopic images could be utilized.

This research was realized with the cooperation of Kyungpook National University and the Center for Integrated Smart Sensors. J.L. (Jimin Lee), B.-S.C., S.-H.K., J.L. (Jewon Lee) and J.L. (Junwoo Lee) performed the simulations and experiments. S.C., J.P., S.-J.L. and J.-K.S. analyzed the results and guided the research direction. J.L. (Jimin Lee) and J.-K.S. wrote the paper. 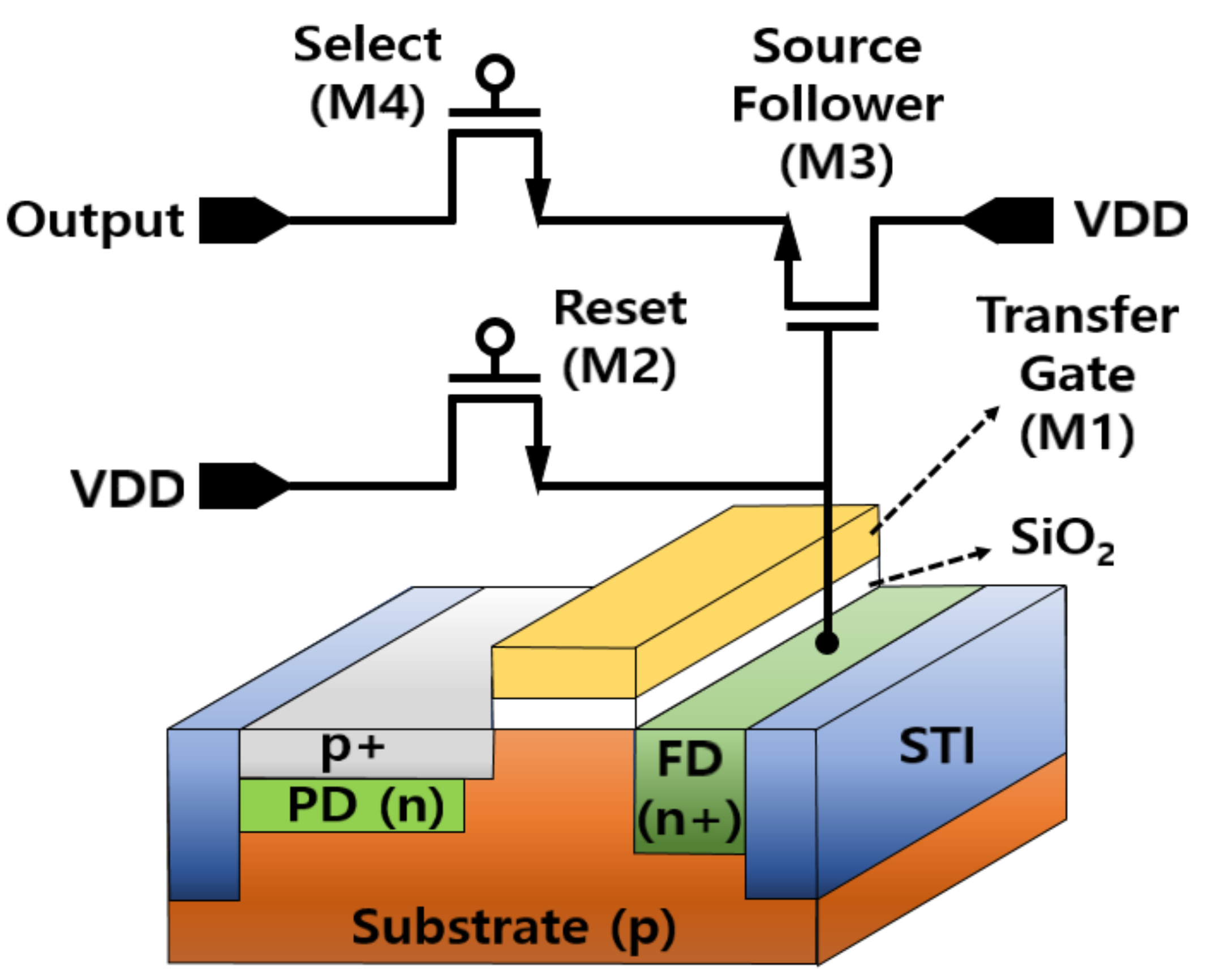 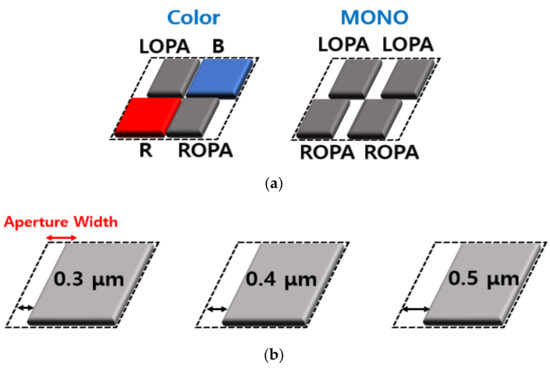 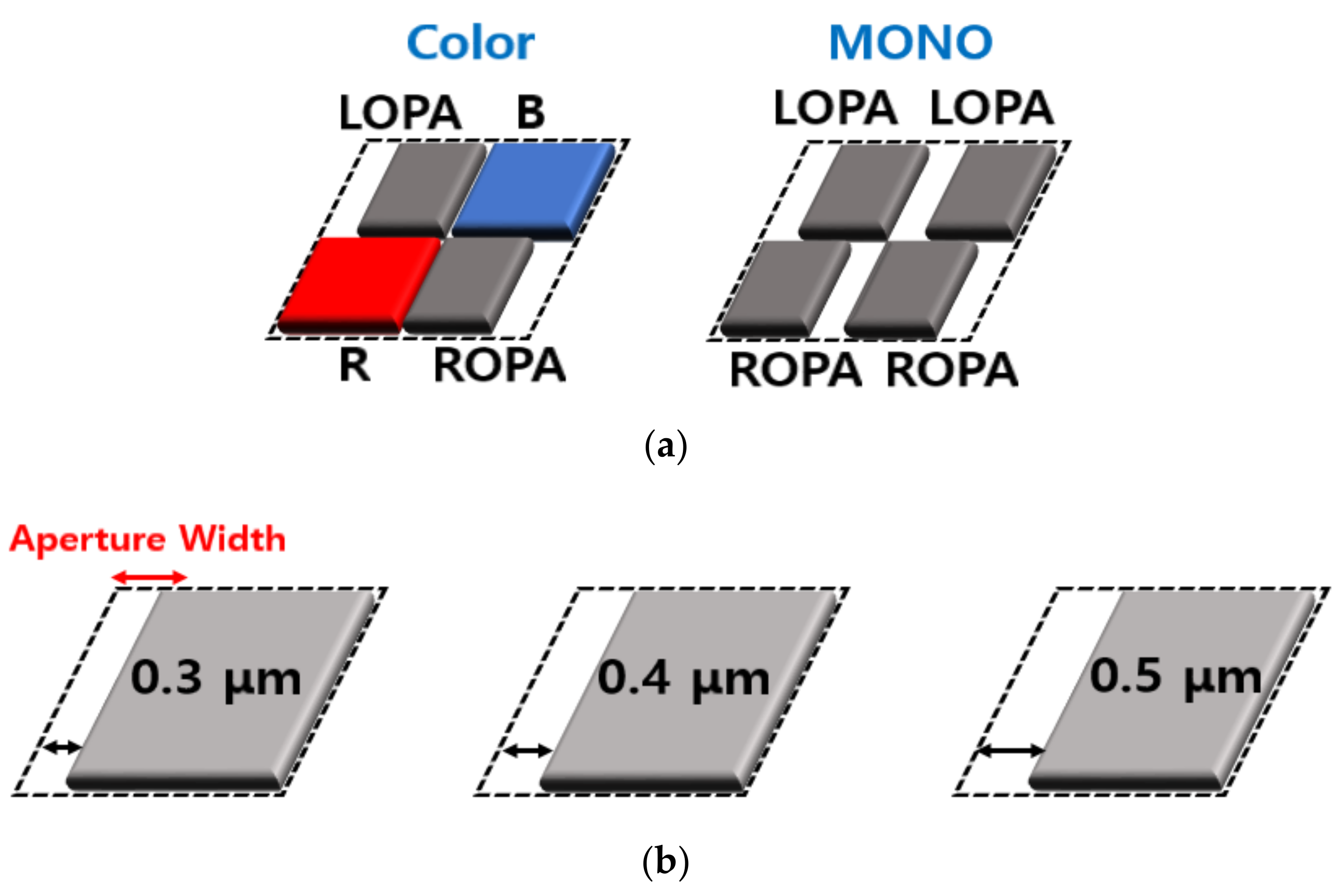 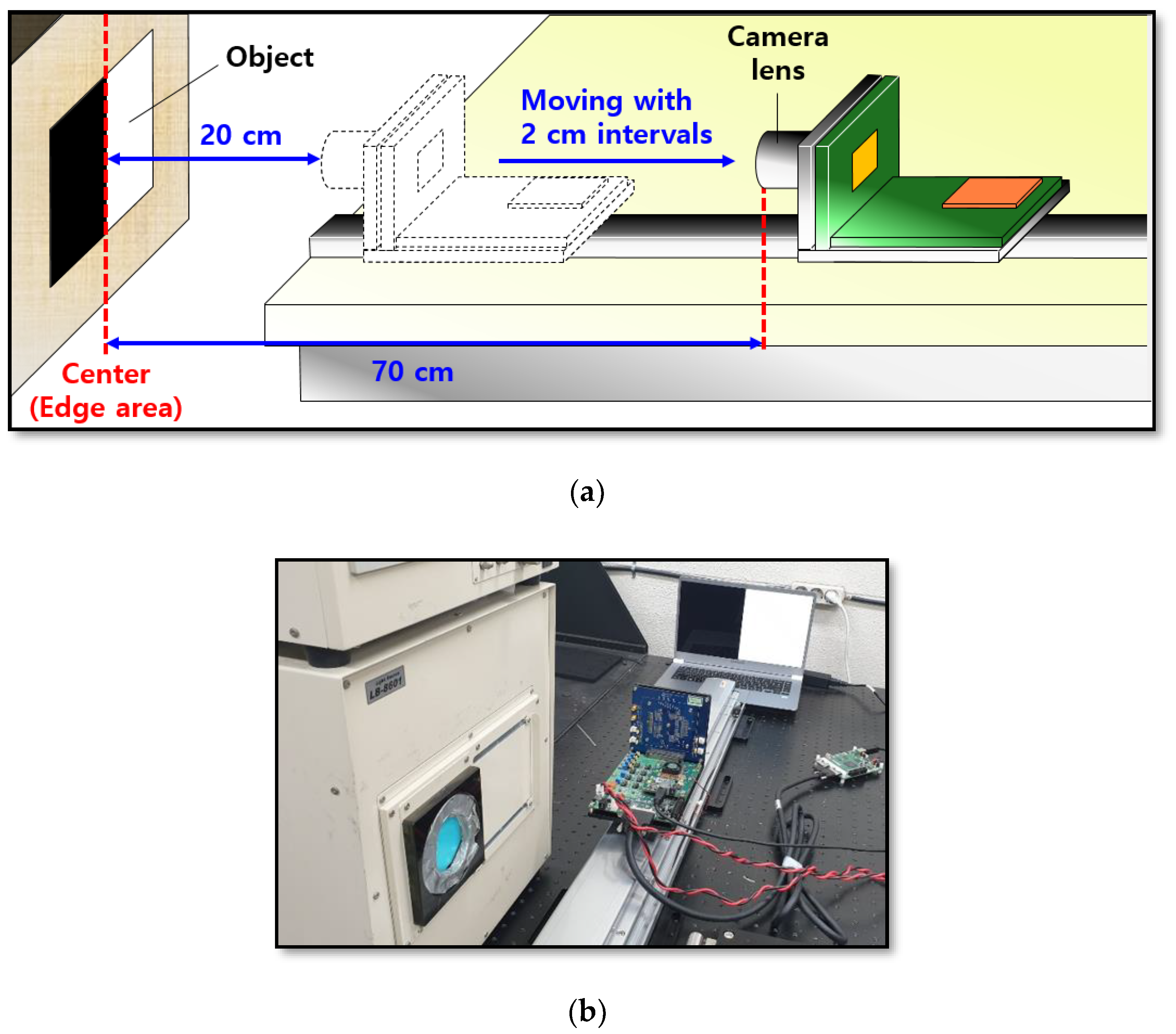 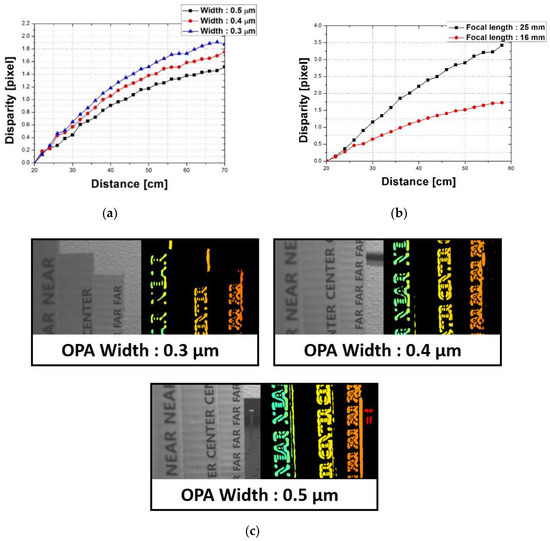 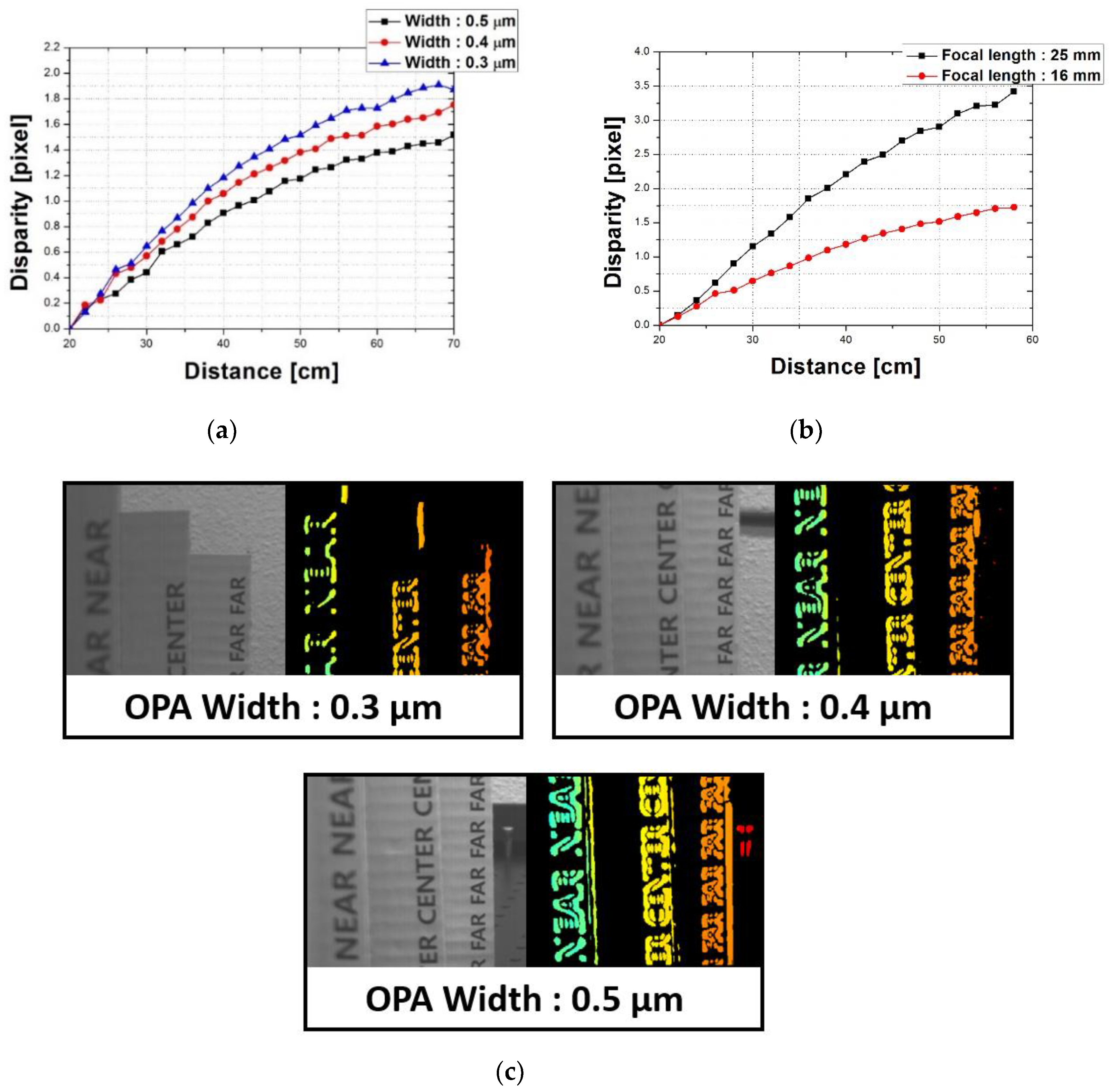 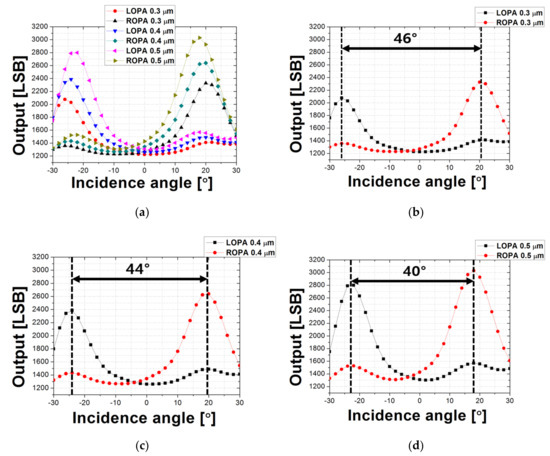 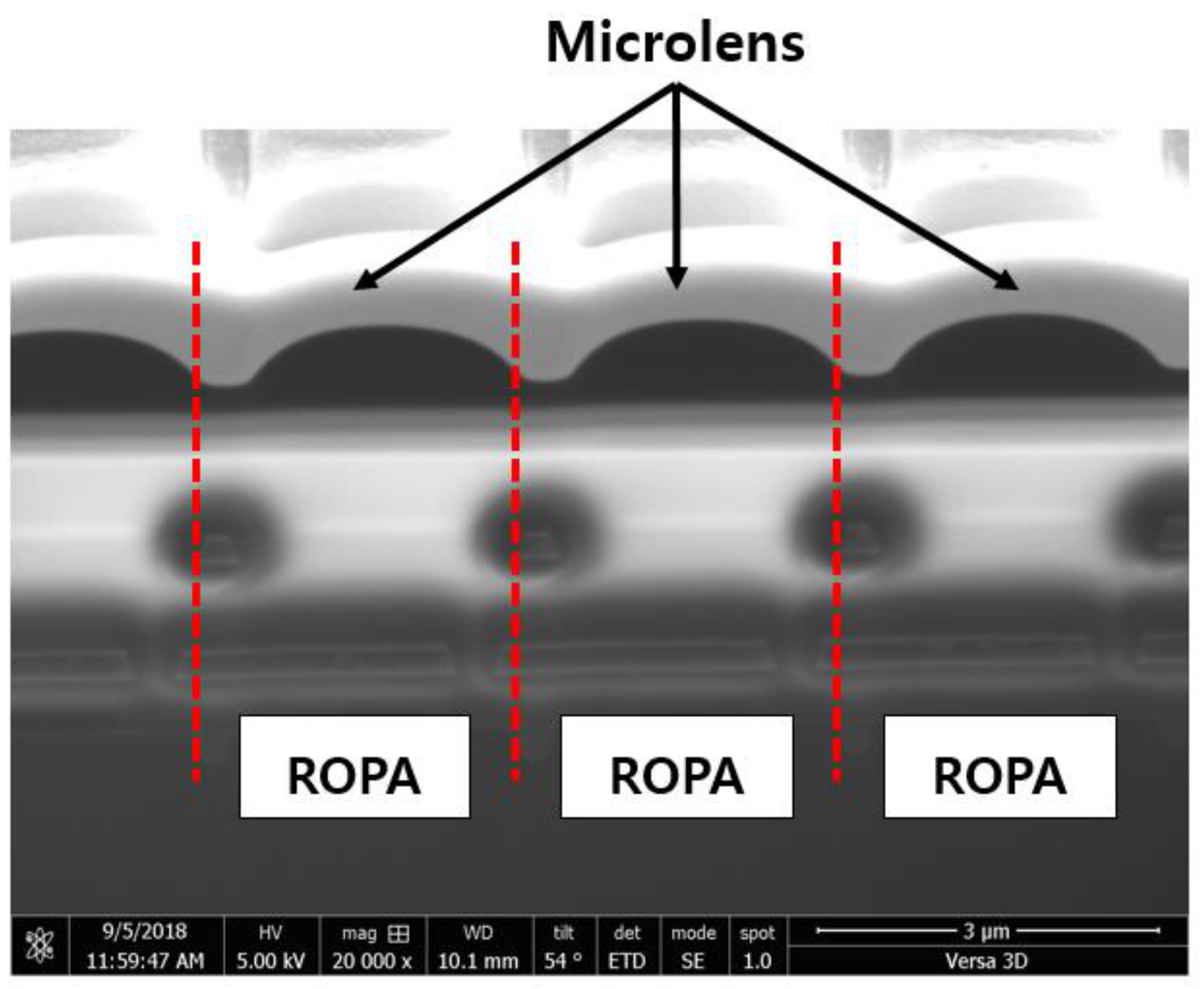