An early detection of functional decline with age is important to start interventions at an early state and to prolong the functional fitness. In order to assure such an early detection, functional assessments must be conducted on a frequent and regular basis. Since the five time chair rise test (5CRT) is a well-established test in the geriatric field, this test should be supported by technology. We introduce an approach that automatically detects the execution of the chair rise test via an inertial sensor integrated into a belt. The system’s suitability was evaluated via 20 subjects aged 72–89 years (78.2 ± 4.6 years) and was measured by a stopwatch, the inertial measurement unit (IMU), a Kinect® camera and a force plate. A Multilayer Perceptrons-based classifier detects transitions in the IMU data with an F1-Score of around 94.8%. Valid executions of the 5CRT are detected based on the correct occurrence of sequential movements via a rule-based model. The results of the automatically calculated test durations are in good agreement with the stopwatch measurements (correlation coefficient r = 0.93 (p < 0.001)). The analysis of the duration of single test cycles indicates a beginning fatigue at the end of the test. The comparison of the movement pattern within one person shows similar movement patterns, which differ only slightly in form and duration, whereby different subjects indicate variations regarding their performance strategies. View Full-Text
Keywords: chair rise test; machine learning; geriatric assessment; wearable sensors; IMU; functional decline; sit-to-stand chair rise test; machine learning; geriatric assessment; wearable sensors; IMU; functional decline; sit-to-stand
►▼ Show Figures 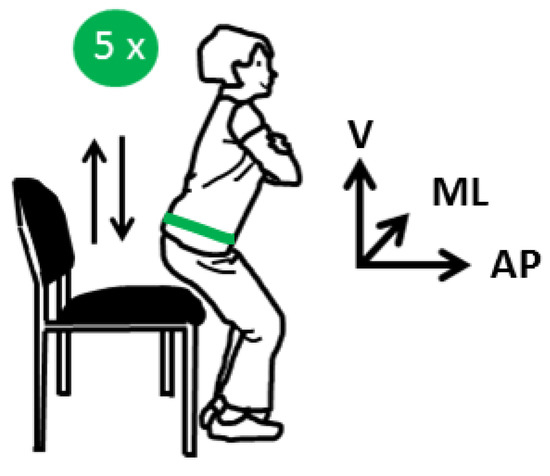