UAV Landing Based on the Optical Flow Videonavigation

The online calibration method of a two-dimensional (2D) galvanometer requires both high precision and better real-time performance to meet the needs of moving target position measurement, which presents some challenges for traditional calibration methods. In this paper, a new online calibration method is proposed using the wavelet kernel extreme learning machine (KELM). Firstly, a system structure is created and its experiment setup is established. The online calibration method is then analyzed based on a wavelet KELM algorithm. Finally, the acquisition methods of the training data are set, two groups of testing data sets are presented, and the verification method is described. The calibration effects of the existing methods and wavelet KELM methods are compared in terms of both accuracy and speed. The results show that, for the two testing data sets, the root mean square errors (RMSE) of the Mexican Hat wavelet KELM are reduced by 16.4% and 38.6%, respectively, which are smaller than that of the original ELM, and the standard deviations (Sd) are reduced by 19.2% and 36.6%, respectively, indicating the proposed method has better generalization and noise suppression performance for the nonlinear samples of the 2D galvanometer. Although the online operation time of KELM is longer than ELM, due to the complexity of the wavelet kernel, it still has better real-time performance. View Full-Text
Keywords: two-dimensional galvanometer; online calibration; wavelet kernel extreme learning machine two-dimensional galvanometer; online calibration; wavelet kernel extreme learning machine
►▼ Show Figures 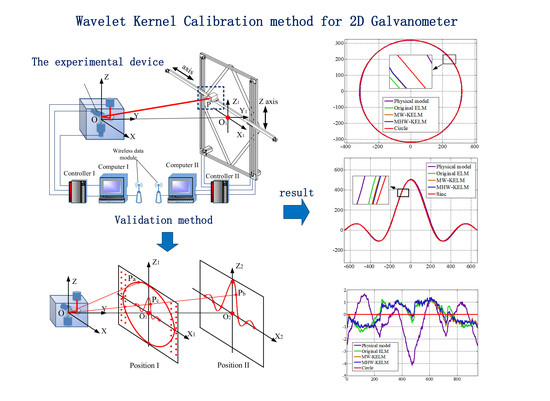