Real-time motion capture of the human arm in the home environment has many use cases, such as video game and therapy applications. The required tracking can be based on off-the-shelf Inertial Measurement Units (IMUs) with integrated three-axis accelerometers, gyroscopes, and magnetometers. However, this usually requires a homogeneous magnetic field to correct for orientation drift, which is often not available inside buildings. In this paper, RPMC (Rest Pose Magnetometer-based drift Correction), a novel method that is robust to long term drift in environments with inhomogeneous magnetic fields, is presented. The sensor orientation is estimated by integrating the angular velocity measured by the gyroscope and correcting drift around the pitch and roll axes with the acceleration information. This commonly leads to short term drift around the gravitational axis. Here, during the calibration phase, the local magnetic field direction for each sensor, and its orientation relative to the inertial frame, are recorded in a rest pose. It is assumed that arm movements in free space are exhausting and require regular rest. A set of rules is used to detect when the user has returned to the rest pose, to then correct for the drift that has occurred with the magnetometer. Optical validations demonstrated accurate (root mean square error °), low latency () tracking of the user’s wrist orientation, in real time, for a full hour of arm movements. The reduction in error relative to three alternative methods implemented for comparison was between and for the same movement and environment. Therefore, the proposed arm tracking method allows for the correction of orientation drift in an inhomogeneous magnetic field by exploiting the user’s need for frequent rest. View Full-Text
Keywords: wearable sensors; inertial tracking; disturbance; perturbation; virtual reality; rehabilitation; stroke; non-homogeneous; nonhomogeneous; Madgwick wearable sensors; inertial tracking; disturbance; perturbation; virtual reality; rehabilitation; stroke; non-homogeneous; nonhomogeneous; Madgwick
►▼ Show Figures 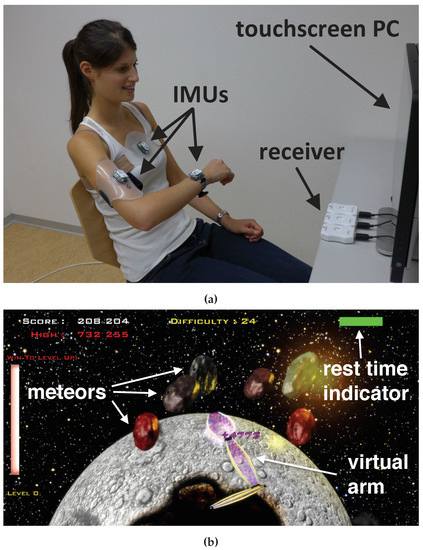