This work presents an integrated Indoor Positioning System which makes use of WiFi signals and RGB cameras, such as surveillance cameras, to track and identify people navigating in complex indoor environments. Previous works have often been based on WiFi, but accuracy is limited. Other works use computer vision, but the problem of identifying concrete persons relies on such techniques as face recognition, which are not useful if there are many unknown people, or where the robustness decreases when individuals are seen from different points of view. The solution presented in this paper is based on an accurate combination of smartphones along with RGB cameras, such as those used in surveillance infrastructures. WiFi signals from smartphones allow the persons present in the environment to be identified uniquely, while the data coming from the cameras allow the precision of location to be improved. The system is nonintrusive, and biometric data about subjects is not required. In this paper, the proposed method is fully described and experiments performed to test the system are detailed along with the results obtained. View Full-Text
Keywords: indoor positioning; WPS; RGB cameras; WiFi; fingerprint map; trajectory; IPS; computer vision indoor positioning; WPS; RGB cameras; WiFi; fingerprint map; trajectory; IPS; computer vision
►▼ Show Figures 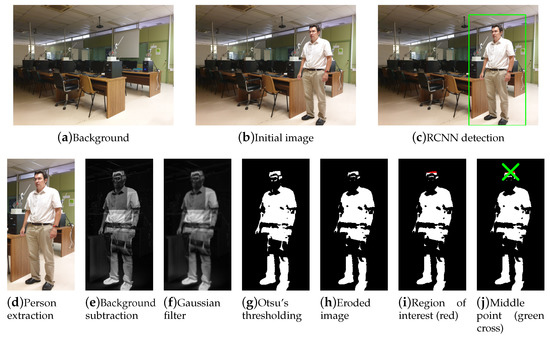