Fusion of Neuro-Signals and Dynamic Signatures for Person Authentication

Many biometric systems based on physiological traits such as ones facial characteristics, iris, and fingerprint have been developed for authentication purposes. Such security systems, however, commonly suffer from impersonation attacks such as obfuscation, abrasion, latent samples, and covert attack. More conventional behavioral methods, such as passwords and signatures, suffer from similar issues and can easily be spoofed. With growing levels of private data readily available across the internet, a more robust authentication system is needed for use in emerging technologies and mobile applications. In this paper, we present a novel multimodal biometric user authentication framework by combining the behavioral dynamic signature with the the physiological electroencephalograph (EEG) to restrict unauthorized access. EEG signals of 33 genuine users were collected while signing on their mobile phones. The recorded sequences were modeled using a bidirectional long short-term memory neural network (BLSTM-NN) based sequential classifier to accomplish person identification and verification. An accuracy of 98.78% was obtained for identification using decision fusion of dynamic signatures and EEG signals. The robustness of the framework was also tested against 1650 impersonation attempts made by 25 forged users by imitating the dynamic signatures of genuine users. Verification performance was measured using detection error tradeoff (DET) curves and half total error rate (HTER) security matrices using true positive rate (TPR) and false acceptance rate (FAR), resulting in 3.75% FAR and 1.87% HTER with 100% TPR for forgery attempts. View Full-Text
Keywords: electroencephalography (EEG); authentication; biometrics; dynamic signature; identification; smartphone electroencephalography (EEG); authentication; biometrics; dynamic signature; identification; smartphone
►▼ Show Figures 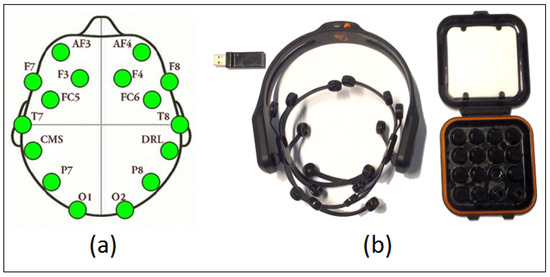