:
This paper proposes a static stress estimation method for concrete structures, using the stress relaxation method (SRM) in conjunction with digital image correlation (DIC). The proposed method initially requires a small hole to be drilled in the concrete surface to induce stress relaxation around the hole and, consequently, a displacement field. DIC measures this displacement field by comparing digital images taken before and after the hole-drilling. The stress level in the concrete structure is then determined by solving an optimization problem, designed to minimize the difference between the displacement fields from DIC and the one from a numerical model. Compared to the pointwise measurements by strain gauges, the full-field displacement obtained by DIC provides a larger amount of data, leading to a more accurate estimation. Our theoretical results were experimentally validated using concrete specimens, demonstrating the efficacy of the proposed method.
Keywords:
concrete; digital image correlation; stress relaxation method

In full-scale civil engineering structures, the actual stress distribution due to self-weight and external loads allows a better understanding of the current structural status. For example, the monitoring of stress levels during construction can provide useful information for both design and construction verification, which can be helpful in assuring structural safety. In addition, the deterioration of prestressed concrete bridges, particularly due to loosened tendons, can be tracked by measuring the decreasing compressive stress in concrete girders [1,2,3]. Despite its usefulness and importance, the measurement of current stress levels in in-service concrete structures is not generally included in construction and maintenance practices [4]; it usually constitutes a challenging process, unless some force transducers were built in during the construction stage.
The stress relaxation method (SRM) [5] is one of the most practical and effective ways to measure the current stress in a structure. When applying the SRM, a small amount of damage is inflicted to the structure, inducing stress relaxation and its associated deformation around the damaged area. The stress level is estimated by analyzing the deformation redistributed by the damage. The SRM has been commonly adopted for the estimation of residual stresses in metals, in which it produces clear and consistent deformations following the inflicted damage. Several studies have applied the SRM to concrete structures, in which the deformation was typically measured using a few strain gauges [6,7,8]. However, concrete structures have considerable uncertainties, caused, for example, by inhomogeneity, inconsistent material properties, and difficulties in creating a hole in the concrete itself. Thus, deformation measurements made using strain gauges at a few points are insufficient to properly handle the uncertainties. Although several studies have shown the potential of measuring the static stress in concrete structures, the SRM has not been widely adopted in infrastructure maintenance, mainly due to the large uncertainty of concrete.
Previous studies involving the core-drilling method contained a couple of critical limitations that impeded the accurate measurement of stress in concrete structures. The core-drilling method involves the infliction of a relatively large amount of damage to the concrete structure, hence it is usually not the preferred method of practitioners and researchers. In literature, the size of the cores used for the SRM varied between 50 mm and 150 mm [7,8,9]; these holes can potentially behave as structural defects and are therefore not desired in practice. Another issue regarding previous studies is that insufficient information was collected about the deformation using the strain gauges. The strain gauge provides an average strain value, in correspondence with the gauge in a longitudinal direction, hence the available strain measurements were quite limited at several points. Particularly when the hole-drilling method with a small amount of damage is considered, the deformation field affects only a tiny area around the hole, which is difficult to measure using the strain gauges. The digital image correlation (DIC) technique was introduced to effectively address these issues.
Deformation measurements during the SRM can be enhanced by DIC [7,9,10] that provides the deformation field of an object’s surface. To perform the DIC, small and irregular speckles are densely painted on the object’s surface. Images of the speckle pattern are captured before and after deformation. A subset of the pattern is defined within the first image, then the location of the same subset is identified in the next image. By repeatedly finding the new location of subsets within the images, the two-dimensional displacement field can be obtained. DIC has been used to measure deformation for various purposes, including microscopic as well as large structures [11,12,13,14,15]. In addition, efforts have been made to apply DIC to concrete structures [16,17,18]. One of the advantages of DIC is that it can measure the displacement field from images; a capability which can very likely overcome the limitations of pointwise measurements performed using strain gauges. In some studies, DIC has been used to measure the deformation in concrete structures during the SRM. Trautner et al. [7] used DIC to measure the displacement fields caused by core drilling in concrete specimens. In their study, the use of the SRM combined with DIC resulted in a 10% error. Their results greatly contributed to the evaluation of in-situ stress in concrete structures, however, the diameter of the cores used (150 mm) impaired the applicability of their study to civil engineering structures. Indeed, high-performance stress estimation methods with practically allowable damages are desirable.
This study proposes a stress estimation method, based on a combination of stress relaxation and DIC. The proposed method initially measures the displacement field around a small drilled hole using DIC; this measurement is subsequently used to estimate the current stress level in the concrete structure by comparing the measured displacement field to that from a finite element model. DIC provides a full-field displacement at all points around the hole, which allows the collection of sufficient displacement information and an effective reduction in the measurement errors caused by the large uncertainty in concrete. The proposed method was validated through laboratory-scale experiments performed on concrete specimens.

This study presented a uniaxial static stress estimation technique, which combines digital image correlation (DIC) and the stress relaxation method (SRM). The static stress in concrete structures can be released through the hole-drilling method. Firstly, the redistributed displacement field generated by the hole-drilling is measured through DIC. Secondly, a reference displacement field is calculated by using a finite element method (FEM), with given structural information. Lastly, the static stress is estimated through the least-square method, using the displacement fields from DIC and the FEM.
The proposed method was validated through laboratory-scale experiments on five concrete specimens, loaded by a universal testing machine (UTM). The best-fitting case resulted in a 5.67% larger stress, showing the smallest mean squared error (MSE) between the DIC and FEM displacement fields. The results with small MSE values provided better estimations than those with large MSE values. We conclude that the proposed method can be used to estimate the static stress in concrete structures; furthermore, the MSE values provide a quality check of the stress estimation.

This research was supported by a grant (19CTAP-C143249-02) from Technology Advancement Research Program (TARP) funded by Ministry of Land, Infrastructure and Transport of Korean government. 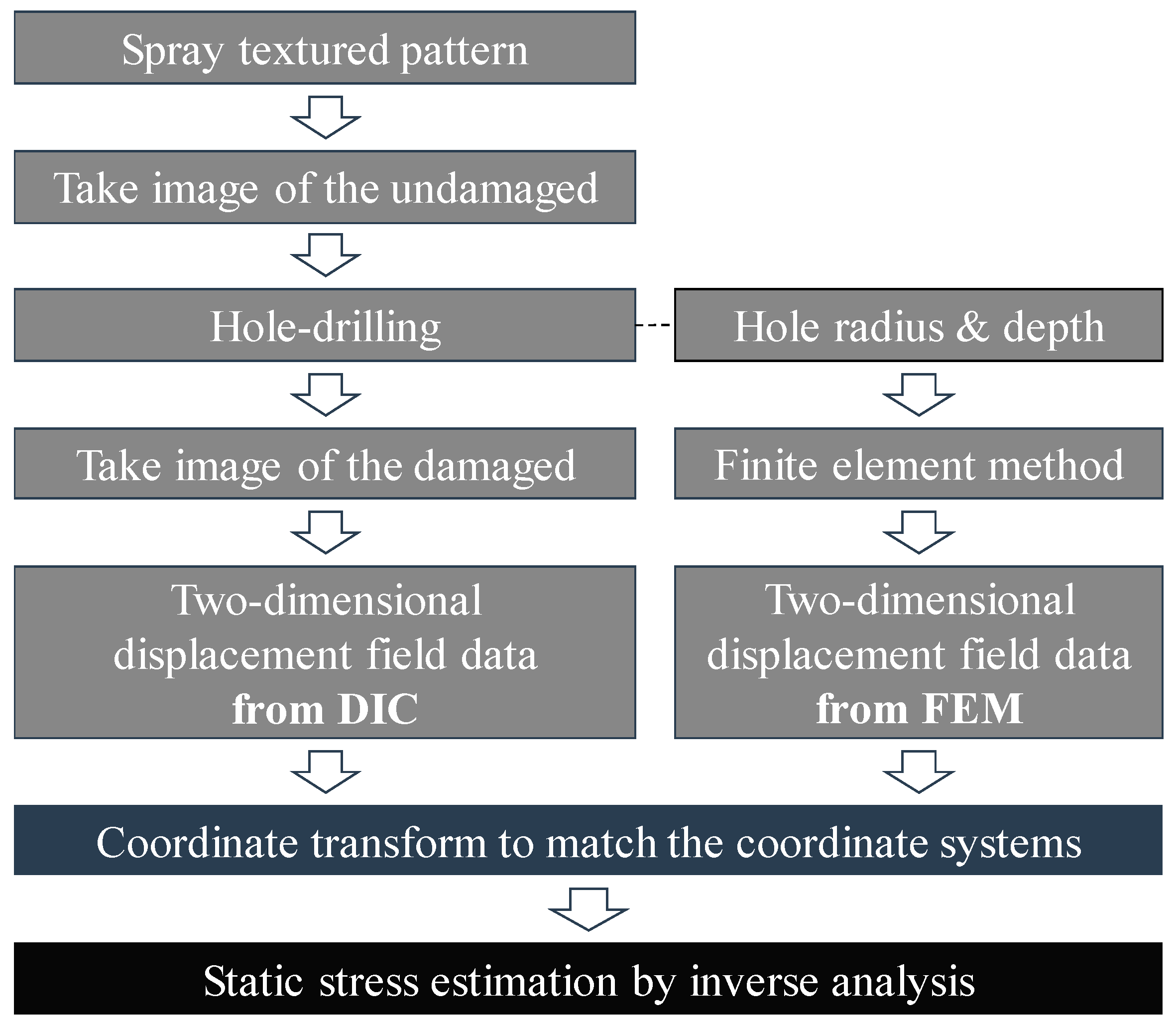 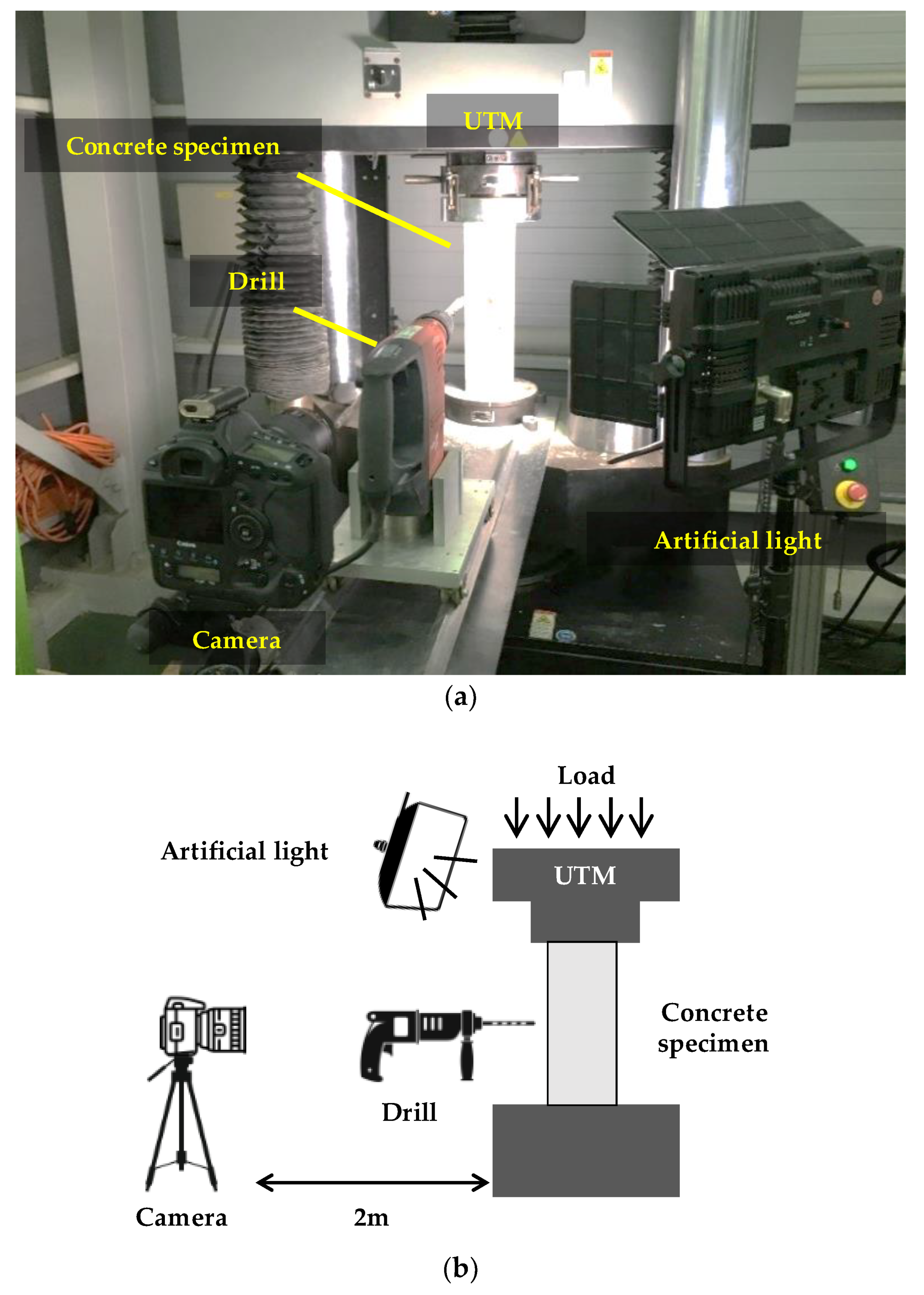 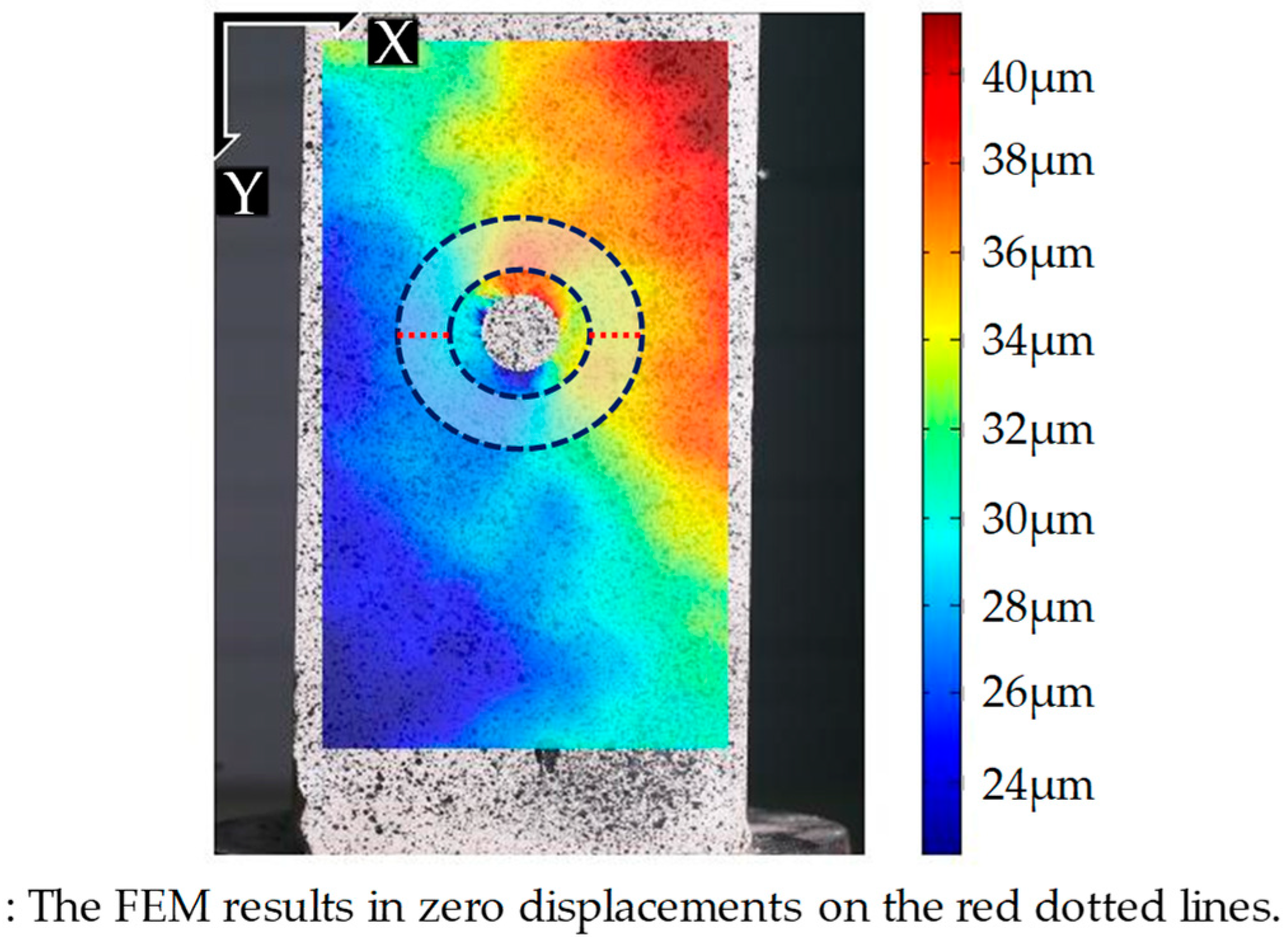