This article describes the adaptation of an existing aerial hyperspectral imaging system in a low-cost setup for collecting hyperspectral data in laboratory and field environment and spatial distortion assessments. The imaging spectrometer system consists of an ImSpector V9 hyperspectral pushbroom scanner, PixelFly high performance digital CCD camera, and a subsystem for navigation, position determination and orientation of the system in space, a sensor bracket and control system. The main objective of the paper is to present the system, with all its limitations, and a spatial calibration method. The results of spatial calibration and calculation of modulation transfer function (MTF) are reported along with examples of images collected and potential uses in agronomy. The distortion value rises drastically at the edges of the image in the near-infrared segment, while the results of MTF calculation showed that the image sharpness was equal for the bands from the visible part of the spectrum, and approached Nyquist’s theory of digitalization. In the near-infrared part of the spectrum, the MTF values showed a less sharp decrease in comparison with the visible part. Preliminary image acquisition indicates that this hyperspectral system has potential in agronomic applications. View Full-Text
Keywords: imaging spectrometer; pushbroom scanner; spatial calibration; MTF imaging spectrometer; pushbroom scanner; spatial calibration; MTF
►▼ Show Figures 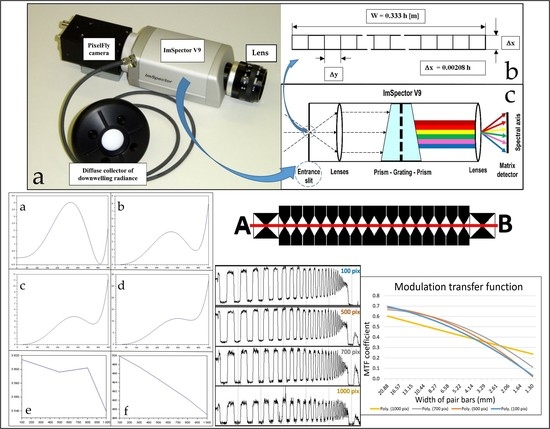