Using the co-precipitation method to synthesize (CeO2)0.95(Y2O3)0.05 (YDC) and solid reaction method to synthesize (CeO2)0.75(ZrO2)0.25 (ZDC), and the crystal structure, micro-structure, total conductivity and electronic conductivity of the two materials was measured with X-ray diffraction (XRD), scanning electron microscope (SEM), DC van der Pauw and Hebb-Wagner methods. A limiting current oxygen sensor was prepared with YDC solid electrolyte and a ZDC dense diffusion barrier layer by employing platinum pasting bonding. Sensing characteristics of the sensor were obtained at different conditions, including temperature (T), oxygen concentration (x(O2)) and water vapor pressure (p(H2O)), and the influence of various conditions on sensing performance was studied. The long-term stability of the sensor was measured in an oxygen concentration of 1.2% and at a temperature of 800 °C for 120 h. XRD results show that the phase structure of both YDC and ZDC belongs to the cubic phase. SEM results show that both YDC and ZDC layers are dense layers, which are then qualified to be the composition materials of the sensor. The limiting current (IL) of the sensor is obtained and the sensor exhibits good sensing characteristics to satisfy the Knudsen model. Log(IL·T) depends linearly on 1000/T with a squared correlation coefficient (R2) of 0.9904; IL depends linearly on x(O2) with an R2 of 0.9726; and sensing characteristics are not affected by p(H2O). It was found that the oxygen sensor has good long-term stability.
Keywords: limiting current oxygen sensor; YDC solid electrolyte; ZDC dense diffusion barrier; water vapor pressure limiting current oxygen sensor; YDC solid electrolyte; ZDC dense diffusion barrier; water vapor pressure

(CeO2)0.95(Y2O3)0.05 (YDC) was synthesized by co-precipitation method with analytical reagents Ce(NO3)3·6H2O (purity 99.95%), Y(NO3)3·6H2O (purity 99.99%) and NH3·H2O (purity 0.1 M) without prior purification treatment. (CeO2)0.75(ZrO2)0.25 (ZDC) was synthesized by solid reaction method with analytical reagents Ce2(CO3)3·xH2O (purity 99.99%), ZrOCl2·8H2O (purity 99.9%) and H2C2O4·2H2O (purity 99.99%) without prior purification treatment. The above two synthetic methods have a low synthesis temperature, which is conducive to energy saving and emission reduction. Firstly, weigh reagents Ce(NO3)3·6H2O and Y(NO3)3·6H2O, and dissolve the reagents in distilled water by intense agitation. Drip reagent NH3·H2O into nitrate salt solution and continuously stir the mixture until a pH of 9 is reached. Wash the obtained precipitate with distilled water and ethanol, then dry it at 70 °C, and calcine at 800 °C for 2 h to obtain YDC solid solution powder. Secondly, weigh the stoichiometric reagents Ce2(CO3)3·xH2O, ZrOCl2·8H2O and H2C2O4·2H2O, and mill them with agate beads for 96 h. Add 7 wt% Tween 60 into the above reagents at the 48th h. Calcine at 600 °C for 4 h to obtain ZDC solid solution powder. Analyze the crystal structure of YDC and ZDC powders by XRD technology (Philips PW3040/60, Amsterdam, Netherlands). Press the YDC and ZDC powders and sinter them at 1600 °C for 6 h in air to obtain sintered bodies for testing. Characterize the micro-structure of sintered bodies YDC and ZDC by SEM equipment (Zeiss, Jena, Germany). The total conductivity and electronic conductivity of ZDC were measured by DC van der Pauw and Hebb-Wagner method with electrochemical workstation (LK98BII, Beijing, China) according to Reference [4]. Ionic conductivity was obtained by subtracting electronic conductivity from total conductivity.
Prepare a limiting current oxygen sensor with YDC solid electrolyte (diameter 9.28 mm and thickness 0.86 mm) and ZDC dense diffusion barrier (diameter 8.40 mm and thickness 1.60 mm) by employing platinum pasting bonding, as shown in Figure 1. Test and record the current-voltage (I-V) characteristics of the oxygen sensor by electrochemical station (LK98BII, China) under different temperatures T, oxygen concentrations x(O2) and water vapor pressures p(H2O). Adjust the oxygen concentration by mixing different portions of argon and oxygen to get different Ar/O2 ratios. Pass dry Ar/O2 through LiCl·H2O saturated solution to adjust p(H2O) according to References [19,20,21]. Long-term stability of the sensor was measured in oxygen concentration of 1.2% and at temperature of 800 °C for 120 h. The total flow rate of Ar/O2 flows was about 100 mL·min−1. Figure 2 demonstrates the I-V characteristics testing system according to Reference [18].

Figure 7 demonstrates the I-V characteristic curves of the oxygen sensor in an oxygen concentration from 0.4% to 1.9% at 800 °C. When working, oxygen is adsorbed to the outside surface of the dense diffusion barrier, then, by absorbing two electrons at the (ZDC/Pt/air) triple phase boundaries at high temperatures, the absorbed oxygen becomes oxygen ions. Since the diffusion barrier is a mixed ionic-electronic conductor, the potential applied to both sides thereof is 0. Oxygen ions are transported from the surface of the ZDC layer to the ZDC/YDC interfaces under the driving of the oxygen pressure difference. Similarly, oxygen ions become oxygen molecules by losing electrons, and the oxygen molecules will be released at the triple-phase boundaries. The migration rate of oxygen ions from ZDC/YDC interfaces to YDC outside surfaces is affected by the voltage applied to the YDC layer. The oxygen pumping rate increases as the applied voltage increases, and the limiting current plateau can be obtained when the voltage increases to a certain value and the oxygen pumping rate from the YDC layer is limited by the oxygen diffusion rate from the ZDC layer. When the pumping rate of the YDC solid electrolyte is limited by the oxygen diffusion rate of the ZDC dense diffusion barrier and the voltage increases to a certain value, the limiting current plateau is obtained. The initial voltage is positively related to oxygen concentration, which is consistent with phenomena of other studies [15,24].
Similarly, the LSGM-based dense diffusion barrier layer limiting current oxygen sensor has a wide range of oxygen concentration detection. In Reference [10], the oxygen measurement range of the Fe2O3-doped LSGM dense diffusion barrier oxygen sensor is 0.2–20.9% at 800 °C. In Reference [24], a limiting current oxygen sensor with a Cr2O3-doped LSGM dense diffusion barrier has an oxygen concentration range of 0.88–7.23% at 700 °C, 0.88–10.94% at 750 °C and 1.92–21% at 800 °C, respectively. With the increase of temperature, the range of oxygen measurement increases. However, the raw materials used in LSGM synthesis are expensive, especially SrO and Ga2O3 (the price of SrO (AR) is 507 dollars per 100 g and the price of GaO (AR) is 231 dollars per 100 g). The synthesis of LSGM solid solution requires two-step synthesis, which is complicated by repeated grinding and high temperature calcination at 1450 °C. Therefore, it is necessary to continue to explore materials and processes suitable for industrial production of sensors. The material in this paper is low in price, simple in synthesis and low in calcination temperature. Although the oxygen measurement range is narrow, the sensitivity is high.
Figure 8 demonstrates the linear correlation between the limiting current and the oxygen concentration at the temperature of 800 °C with R2 of 0.9726. Refer to Reference [2] for Knudsen diffusion correlation theory, which is the same as this correlation. where is the oxygen diffusion coefficient, P the partial pressure difference between electrodes, T the temperature, F the Faraday constant, R the gas constant, S the total cross-sectional area, and L the length of the diffusion path, respectively.
Solid state theory of solid ion diffusion mode, diffusion coefficient () and temperature (T) is as follows: where is the constant of the frequency factor, the activation energy for the diffusion process and the Boltzmann constant, respectively.
Equation (3) is obtained by simultaneous Equations (1) and (2):
Assuming the oxygen concentration is stable, then:
Equation (5) is obtained by introducing Equation (4) into Equation (3):
Equation (6) is obtained by solving the logarithm of Equation (5): and then,
So we get Equation (8):
Equation (9) is obtained by sorting out:
Figure 9 demonstrates the linear relationship between and 1000/T in x(O2) of 2.5% according to Equation (9) with an R2 of 0.9904. This relationship meets the Knudsen diffusion model.

Figure 10 demonstrates the effect of p(H2O) on I-V characteristic curves in an oxygen concentration of 1.2% and at a temperature of 800 °C. As can be seen, the sensing characteristics of the oxygen sensor obtained almost coincide under different p(H2O), indicating that the p(H2O) does not have significant effect on the I-V characteristics within the test range. Some studies about the influence of p(H2O) on the limiting current oxygen sensor show that the porous type sensor is affected by p(H2O), while the dense type sensor is not affected [18,25,26]. The dense type oxygen sensor has excellent selectivity to oxygen, which is an excellent indicator of the sensor.
So far, the LSGM-based dense diffusion barrier layer limiting current oxygen sensors with the best sensing performances has not studied the effects of water vapor pressure on the sensing performance of the sensor [10,15,24]. However, in my previous researches, such as in References [27,28], the sensing performance of the dense diffusion barrier limiting current oxygen sensor is not affected by water vapor pressure, because the dense diffusion barrier is oxygen–ion conductive.

Using the co-precipitation method to synthesize YDC and the solid reaction method to synthesize ZDC, we prepared a YDC solid electrolyte and ZDC dense diffusion barrier-based limiting current oxygen sensor by platinum pasting bonding method. XRD results show that YDC and ZDC belong to the cubic phase structure. SEM results show that the sintered bodies are dense and conform to the materials for limiting current oxygen sensor. The oxygen sensor has good sensing performance, which is as follows: log(IL·T) depends linearly on 1000/T with an R2 of 0.9904, IL depends linearly on x(O2) with an R2 of 0.9726 and sensing characteristics are not affected by p(H2O), and the limiting current decreases very little with the increase of test time from 0 to 120 h. 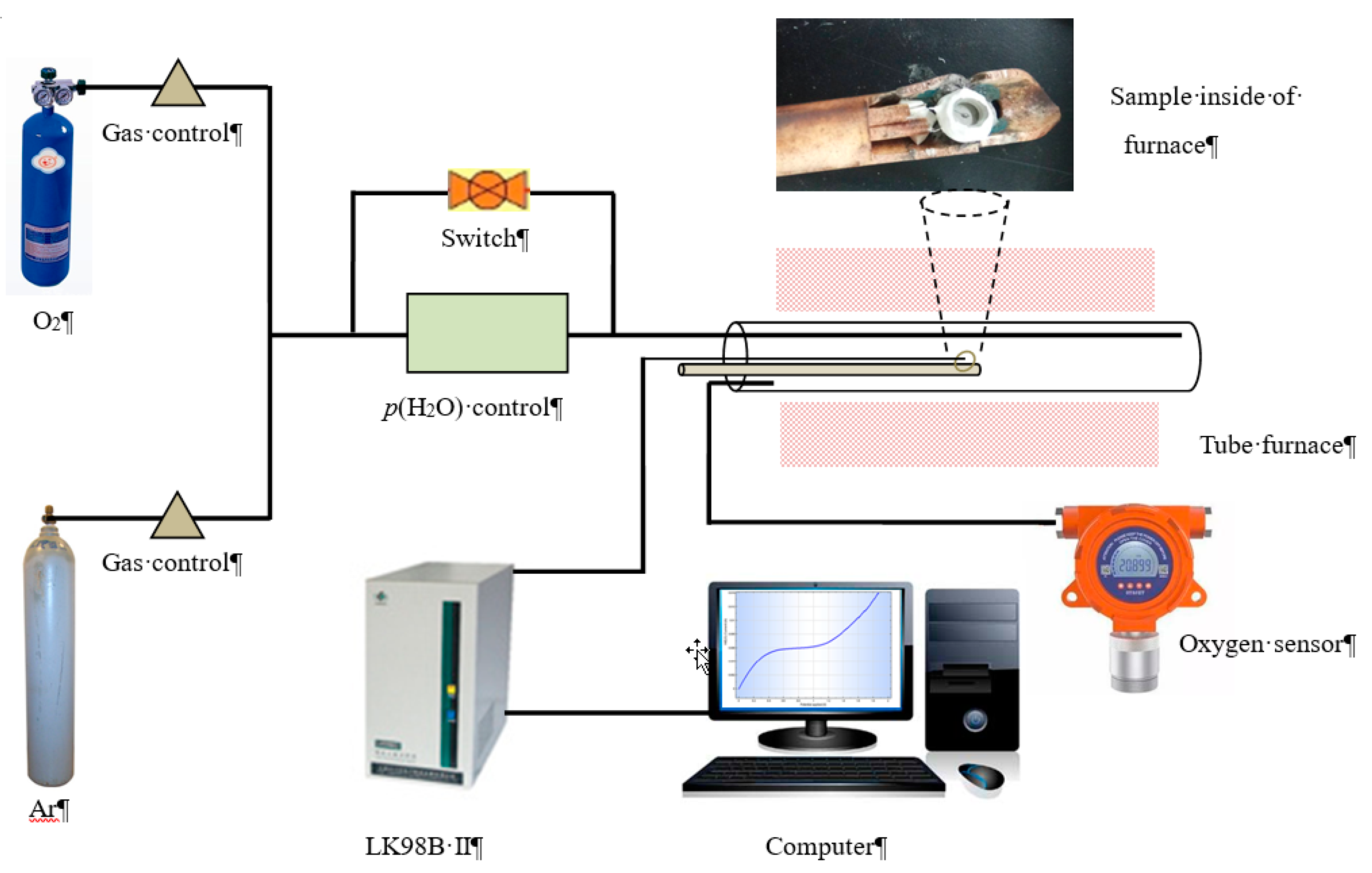 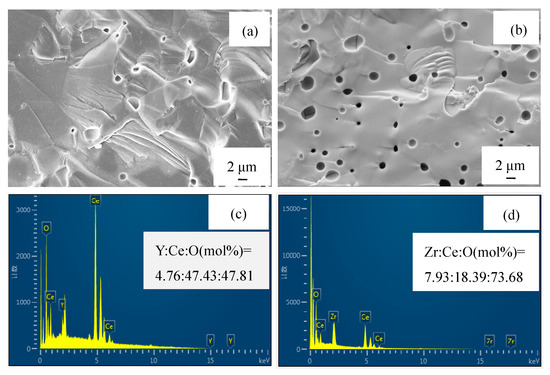 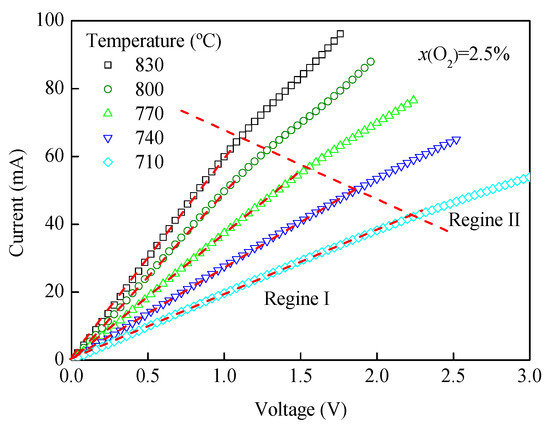 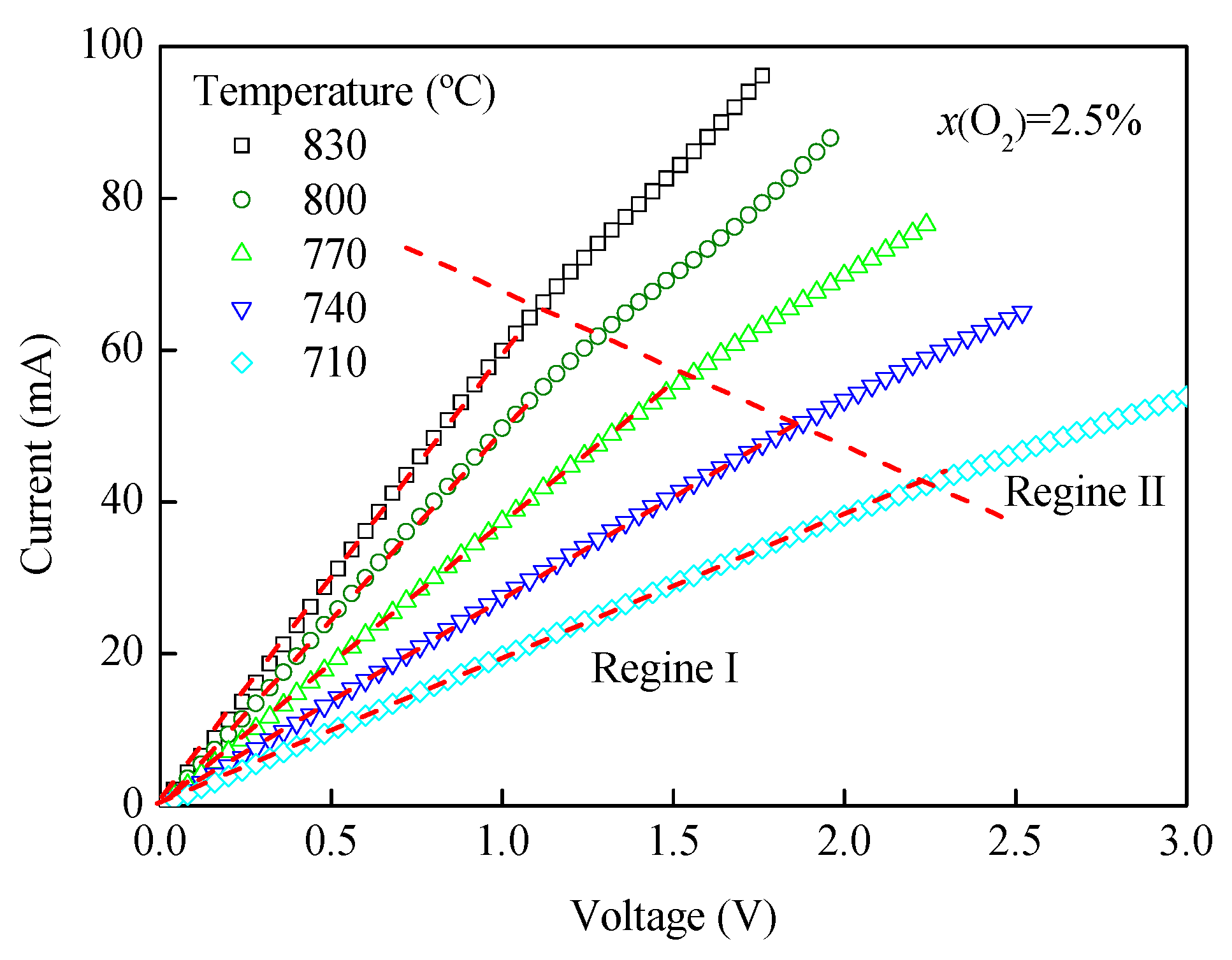 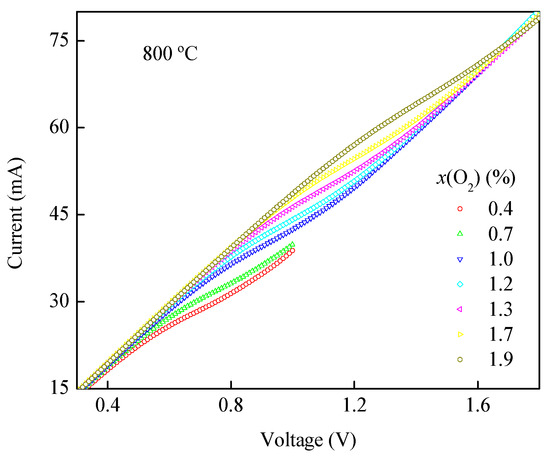 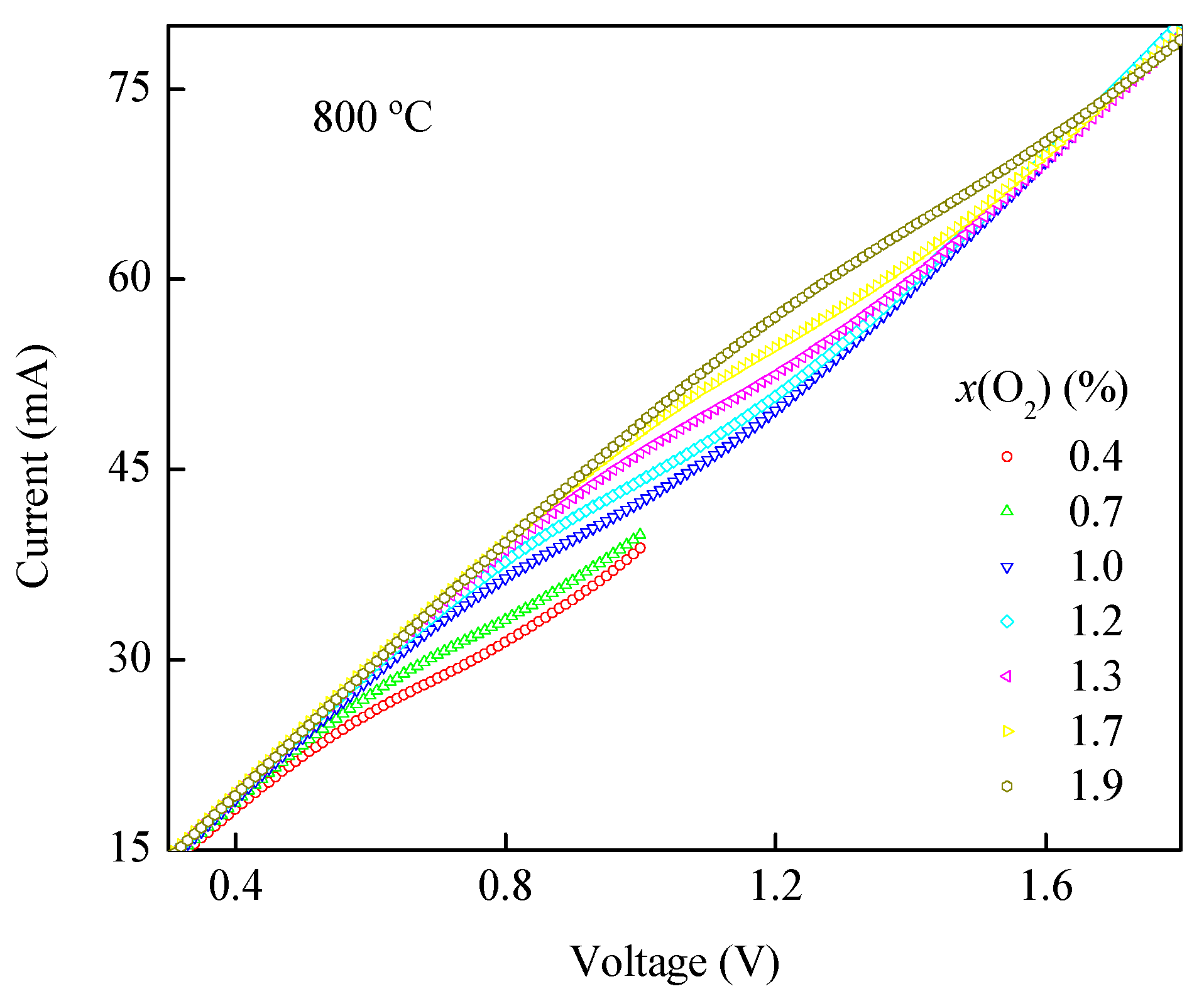 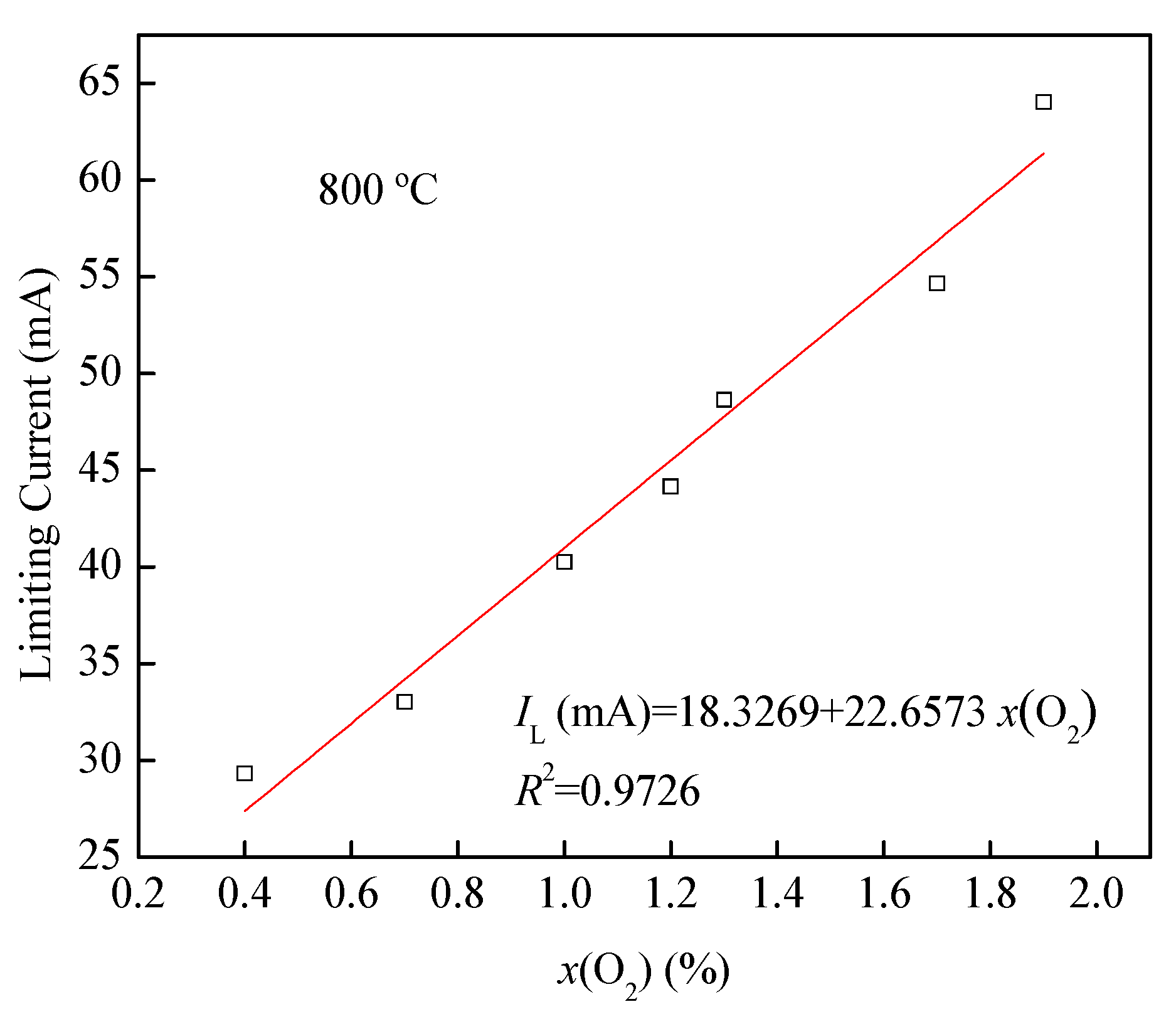 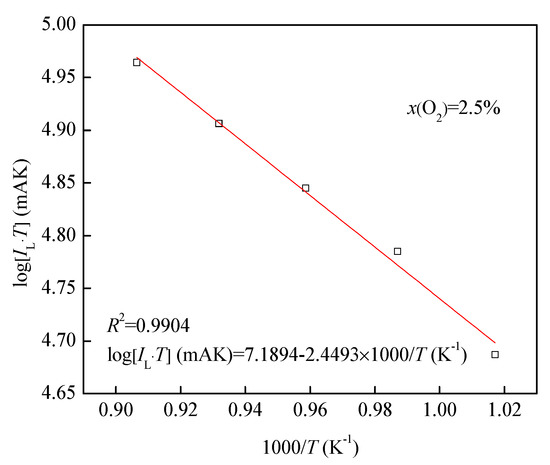 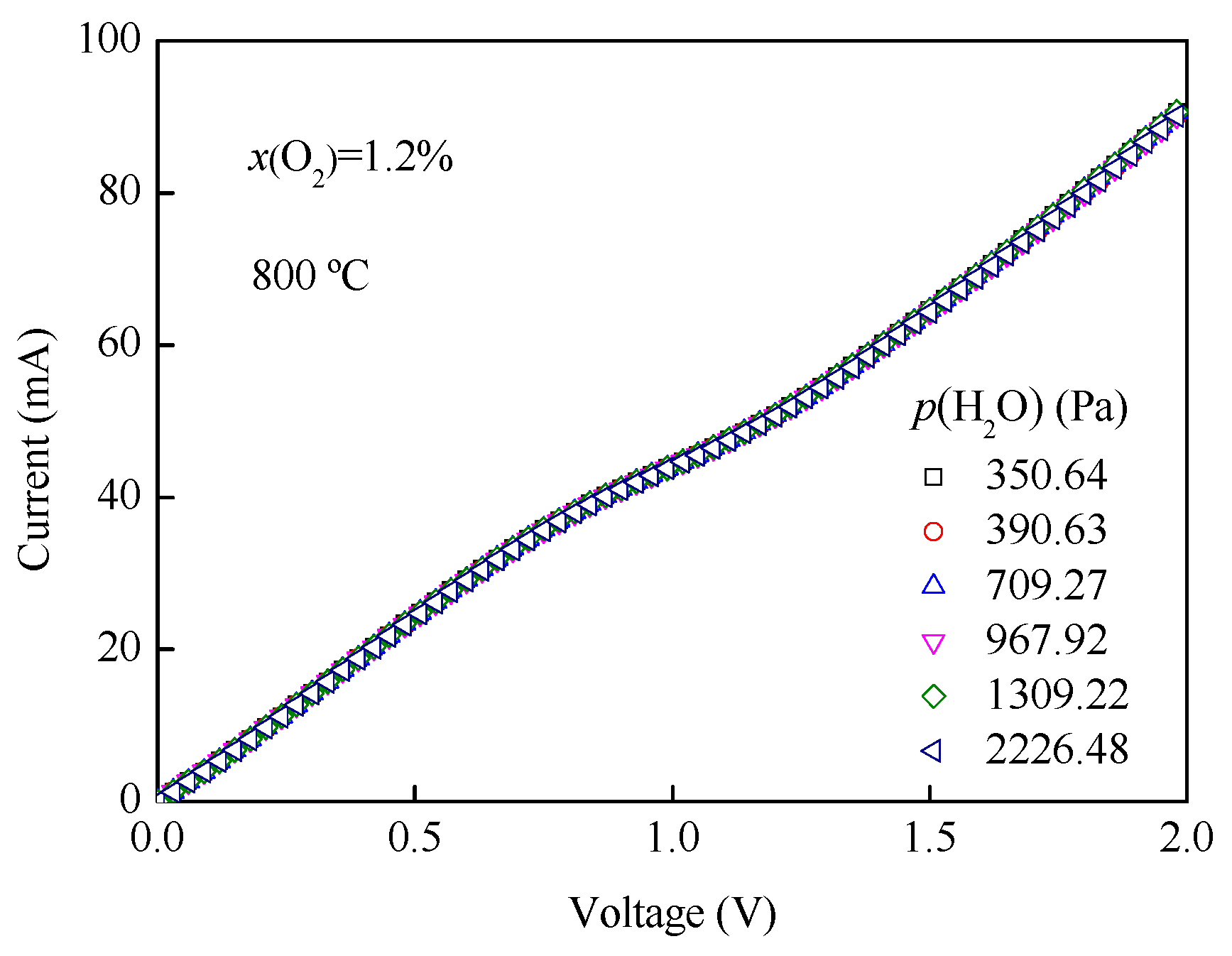 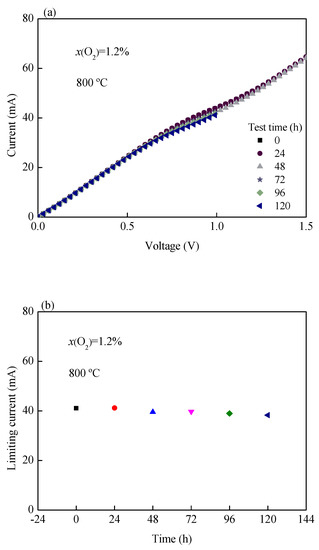 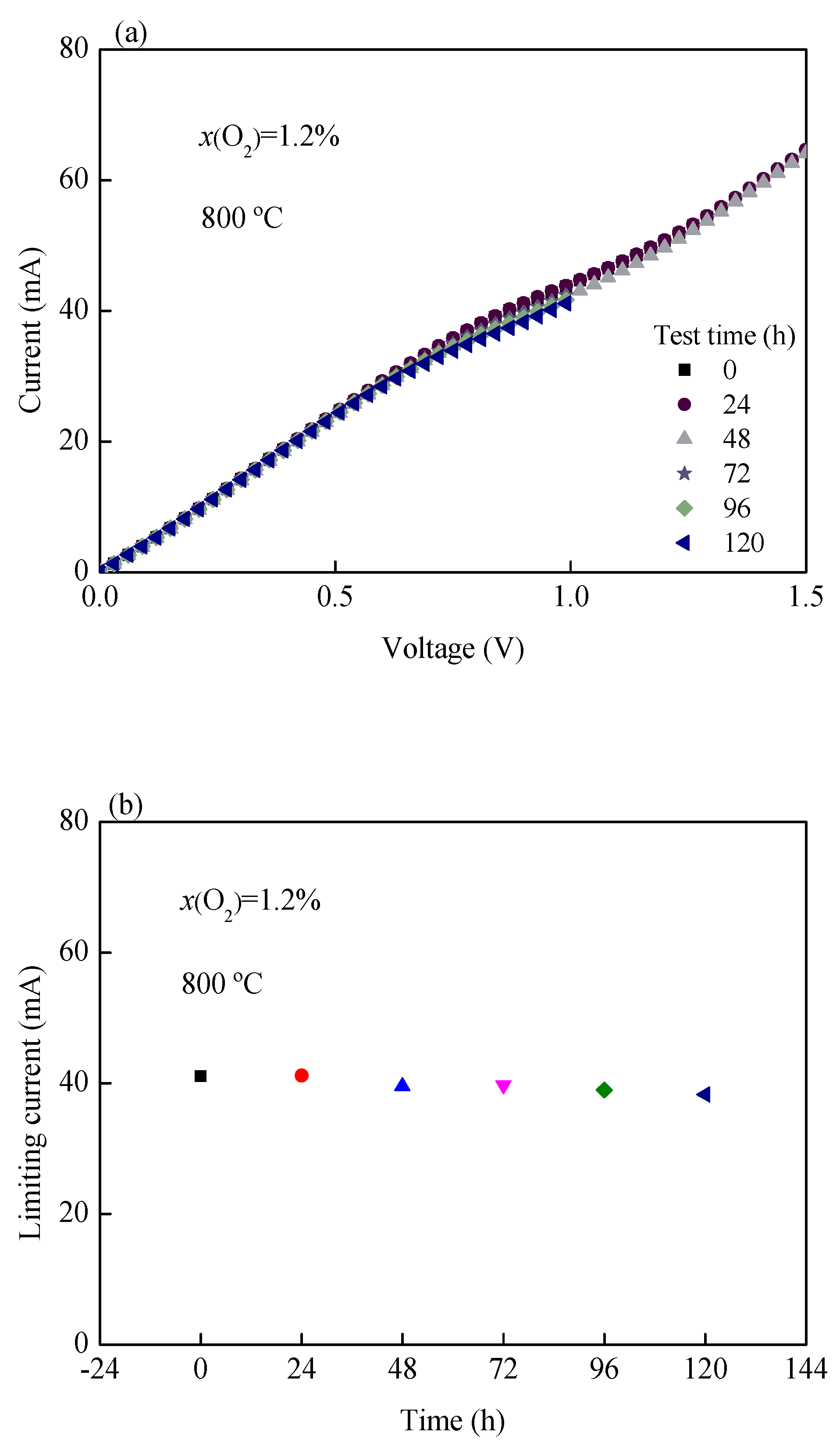