:
There are some special merits for the orthogonal frequency division multiplexing (OFDM) chirp waveform as multiple input multiple output (MIMO) signals. This signal has high range resolution, good Doppler tolerance, and constant modulus superiority since it exploits a full bandwidth and is based on chirp signals. The correlation sidelobe peaks level are critical for the detection requirement of MIMO radar signals, however conventional OFDM chirp signals produce high autocorrelation sidelobe peaks (ASP) and cross-correlation peaks (CP), which reduces detection performance. In this paper, we explore the structure of OFDM chirp signals’ autocorrelation function and proposed a scheme to reduce the designed signal’s ASP by a designing suitable range of subchirp bandwidth and a segmented transmit-receive mode. Next, we explore a suitable range of interval between the chirp rates of each two signals to reduce the CP. The simulation of designed signals verifies the effectiveness of the proposed methods in the reduction of ASP and CP, with the correlation performance being compared with recent relate studies. In addition, the multiple signals detection and one-dimensional range image simulation show the good detection performance of a designed signal in MIMO radar detection.
Keywords:
time-frequency structure; autocorrelation sidelobe interference; cross-correlation interference; orthogonal frequency-division multiplexing (OFDM) chirp waveform; multiple-input multiple-output (MIMO) radar

Considering the correlation function of the designed signal, Equation (16) can be written under as: where is the cross-correlation function between and , and is the mth pulse of it. We expand as: where owing to and , will happen during . Furthermore, under , if , function would have a maximum value, which causes high CP. Thus, when the time-frequency structure in Section 2 is unchanged, should be established to avoid high CP. We define as: and define the CP between and as:
Next, the relation between the CP and is explored. We set , and keep changing during . Moreover, the subcarrier frequency code sequences are set the same as the conventional OFDM chirp signal in Figure 1. Lastly, the CP curve of the designed signals and with chirp rate difference is plotted basing Equations (20)–(23) in Figure 8.
In Figure 8, the CP shows a remarkable reduction with ’s increase. The range of interval between the chirp rates of two designed signals for reducing their CP under −30 dB is shown in Table 2. When , the CP is −19.5 dB, which reduces to −30dB while is taken as −0.165 . Thus, low CP can be obtained with a suitable interval between the chirp rates of two designed signals.

In this section, we give some designed examples and corresponding simulation results to evaluate the effectiveness of the proposed OFDM chirp waveform methods.
To explore the designed signals’ Doppler performance, Figure 9a–f gives the self-ambiguity function response of a conventional OFDM signal and designed signal with its , and parameters at and . As shown in Figure 9b,e, the designed signal has the same doppler resolution performance as a conventional OFDM chirp signal. Furthermore, in Figure 9c,f, the designed signal has lower range sidelobes than conventional ones.
In order to evaluate the time-frequency structure and correlation performance of the designed signals, four signals are simulated. According to the conclusion in Table 1, there are two ranges for the to obtain low ASP. We designed two groups of four signals with each two taking the value during each range respectively for the simulation. In addition, as shown in the conclusion in Table 2, the interval of the chirp rates between the two simulation signals will be more than . The designed parameters are shown in Table 3.
After subchirps sequences coding and subchirp rate plus and minus (PM) coding for reducing the designed signals’ CP, the time-frequency structures of the designed four OFDM chirp signals are plotted in Figure 10a–d, where and are coded as the sequences of and for comparison. In Figure 10, each subchirp duration is T, and in a signal, each subchirp bandwidth is , where n is 1, 2, 3, 4. Since the PM coding will not influence the ASP of the designed signals for each subchirp being transmitted separately, we set signals and with all plus subchirp rates and signals and with all minus subchirp rates to further reduce the CP.
Figure 11 plots the correlation functions of signals and . Comparing the results in Figure 11a with that of Figure 2a shows that the autocorrelation of conventional OFDM waveforms and designed waveforms are different. Figure 2a shows high sidelobes near the main lobe, which also influences the resolution among multiple close targets or in continuous targets and easily causes false detection. The reason is that inappropriate subchirp bandwidth causes high peaks in multiple-subchirp autocorrelation function. Since the suitable subchirp bandwidths are taken and designed transmitting mode is adopted which removes the MSCF from AF, the designed waveforms’ ASP obtains an effective suppression near the main lobe, as obtained in Figure 11.
By comparing the results in Figure 11b with that of Figure 2b, it shows that the cross-correlation functions of the conventional waveforms and designed waveforms are diverse. The cross-correlation functions of the conventional waveforms in Figure 2b have some high grating sidelobes, which are easily judged as weak targets, especially when multiple sidelobes of several close targets overlap and cause false detection. The reason for this is that subchirps with the same carrier frequency and the same chirp rate of two signals simultaneously exist in the same subchirp durations. Since the chirp rates of two signals have kept enough interval as the proposed methods, the sidelobes in the cross-correlation function of the designed waveforms reduce dramatically in Figure 11b, and the sidelobe levels are more stable than that of the conventional waveforms.
For an evaluation of the resolution property, the autocorrelation curves comparison has been made in Figure 12. Since there exists a difference among the frequency spectrums of the three signals, they have different autocorrelation function structures. The nonlinear frequency modulation (NLFM) signal has widest main lobe, 4.05 ns, and the lowest sidelobes, −52.7 dB, and the conventional OFDM signal has the narrowest main lobe, 2.16 ns, but the highest sidelobes, −13.4 dB. The designed signal takes the middle properties with the main lobe width, 3 ns, and sidelobe height, −30.2 dB, which obtains a balance between resolution and detection. Therefore, the resolution property of the designed signal reduces for the improvement of detection, which is 0.52 m compared with 0.375 m for the conventional one.
Next, for further comparisons of detection performance, the ASP and CP values of conventional OFDM (COFDM) signal, Li’s OFDM signal [25], piecewise nonlinear frequency modulation OFDM (PNLFM-OFDM) signal [26], and the designed segmented transmitting OFDM (STOFDM) signal are listed in Table 4. Where the STOFDM signal is superior with the lowest sidelobes in both ASP and CP.
To better evaluate the multiple signals detection performance, different combinations of four designed signals are simulated with their ASP and CP values listed in Table 5. The autocorrelation of signal and cross-correlation between signal and are shown in Figure 13. In addition, the autocorrelation of signal and cross-correlation between signal and are shown in Figure 14. The average correlation sidelobes among four designed signals are stable and all lower than −30 dB since the number of transmitting signals adds to 4, which proves the good sidelobe properties of STOFDM signals as MIMO radar signals.
Finally, we simulate the proposed OFDM chirp waveforms in a MIMO radar one-dimensional range imaging application. Without loss of generality, we consider a four-antenna MIMO radar using the waveforms illustrated in Figure 10. Other parameters are assumed as: , . In a one-dimensional range image, we decomposed a ship target, which is 172 m long and 16m wide, into 152 point targets. Figure 15a shows the one-dimensional radar cross section (RCS) range images and Figure 15b shows the one of four matched filters output of . For a comparison, the imaging result for a conventional single input single output (SISO) radar using a conventional OFDM chirp signal with equal system parameters is also shown in Figure 15c. Compared with Figure 15a, there are some high amplitude false target points in Figure 15c, for the high range peak sidelobe ratios (RPSLR) of conventional chirp signal. But in Figure 15b, those false targets are suppressed and real target points are compatible with Figure 15 even after adding cross-correlation interferences with . The RPSLRs of each signal are shown in Table 6.

The OFDM chirp waveform is widely applied in MIMO radar because of its high range resolution and good Doppler tolerance. However, some high lobes exist in the signals’ cross-correlation function for multiplexing of bandwidth and since the signal is based on a chirp signal, high sidelobes also exist in its autocorrelation function. These two imperfections may influence weak target detection. To solve this problem, the proposed method included two design steps: Signal autocorrelation construct design and orthogonality design between signals. A range of subchirp bandwidths and a corresponding transmit-receive mode were designed to reduce ASP and a range of suitable intervals between the chirp rates of two relative signals were proposed to reduce CP. The self-ambiguity functions and correlation function verified the good Doppler tolerance, low ASP, and CP properties as well as a little main lobe broadening of the designed signal. Moreover, the multiple signals detection and one-dimensional range image simulation proved the improvement of multiple signals detection performance in MIMO radar especially for weak targets detection and low range peak sidelobe superiority of designed signals.
In future work, we intend to further optimize the multiple signals detection model and reduce the mutual impact among transmitted signals. On the other hand, the targets RCS property will be combined to analyze the signal detection performance in specific changes and targets. Thus, the application of designed signals can be improved. 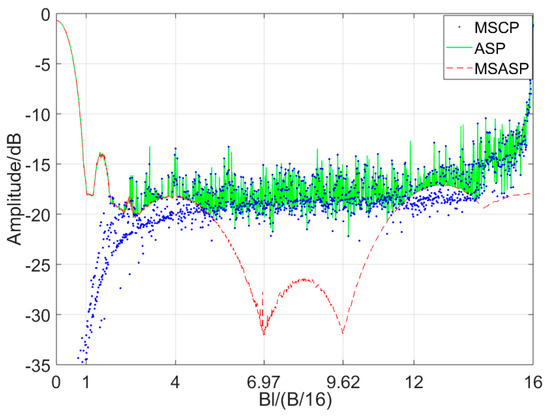 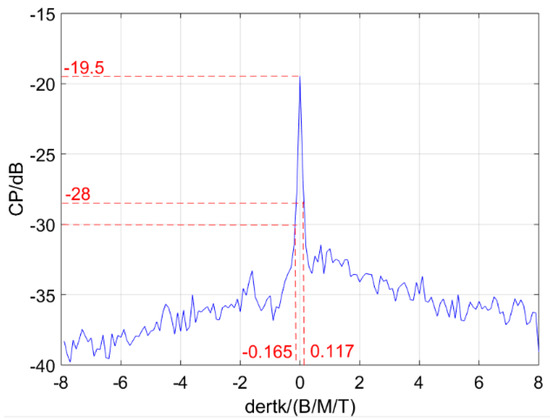 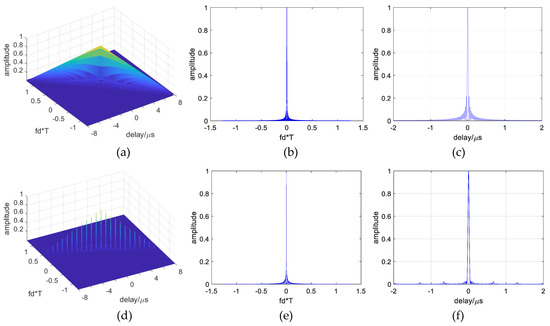 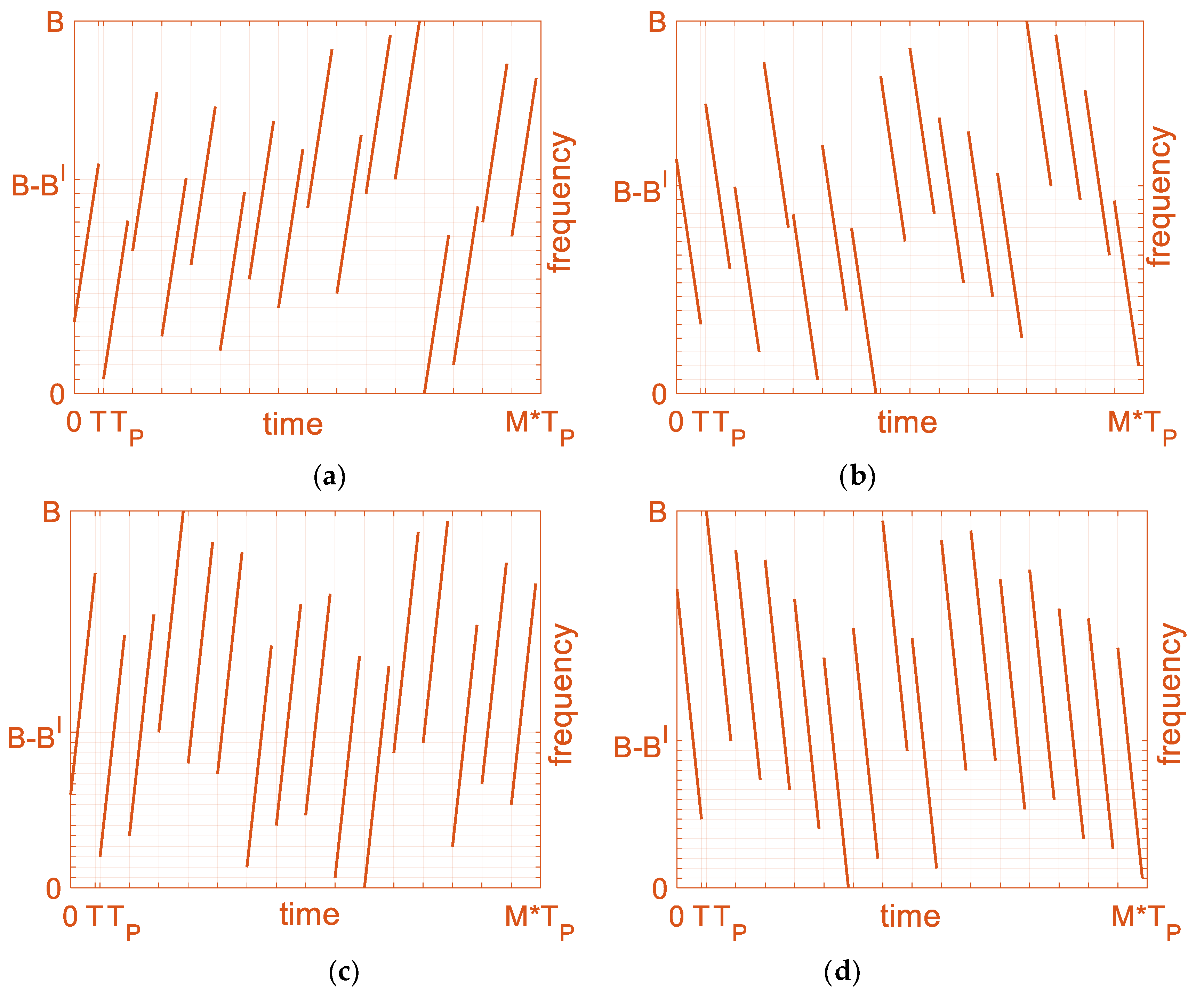 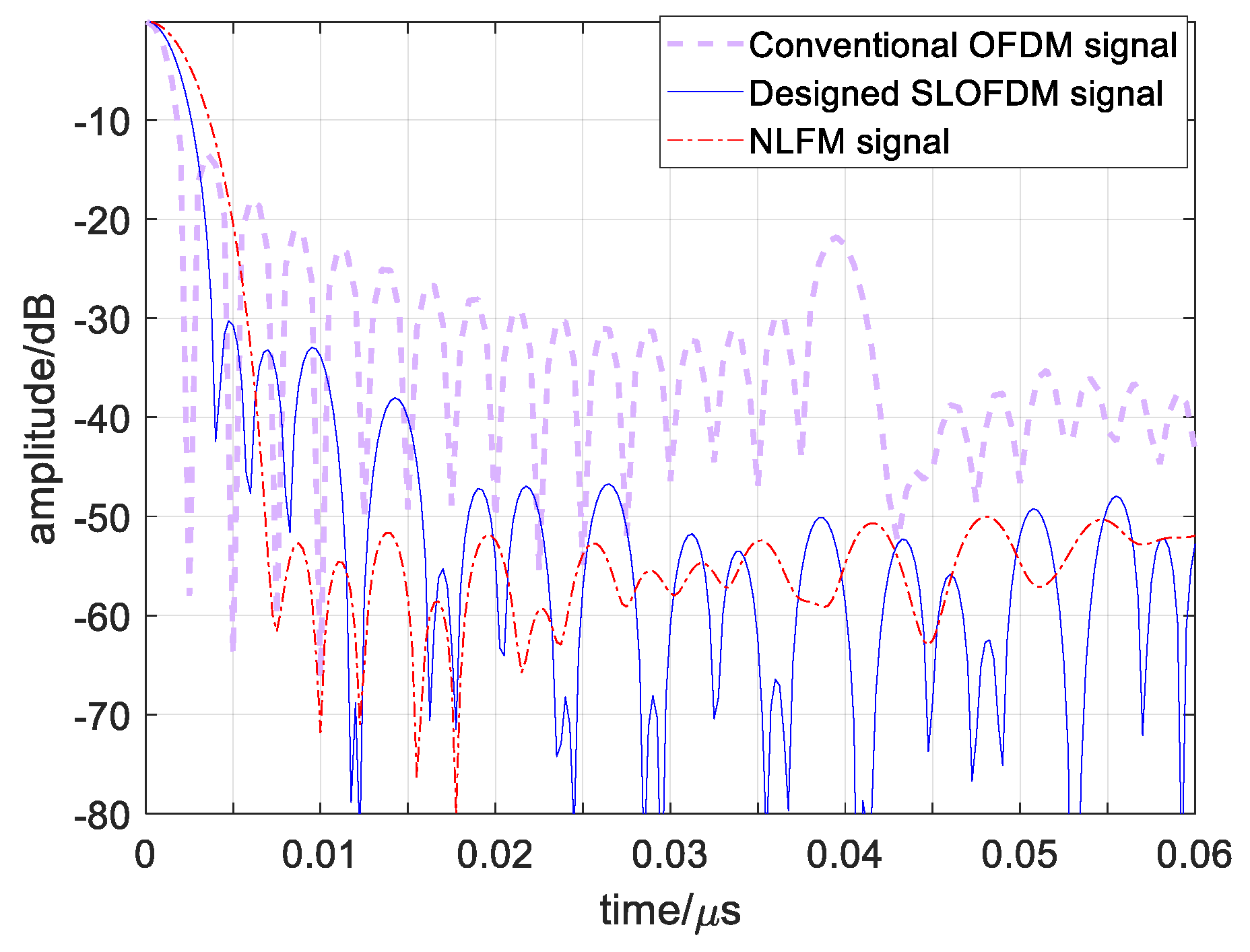 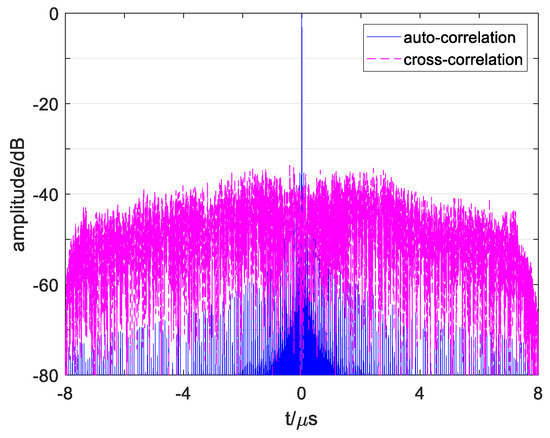 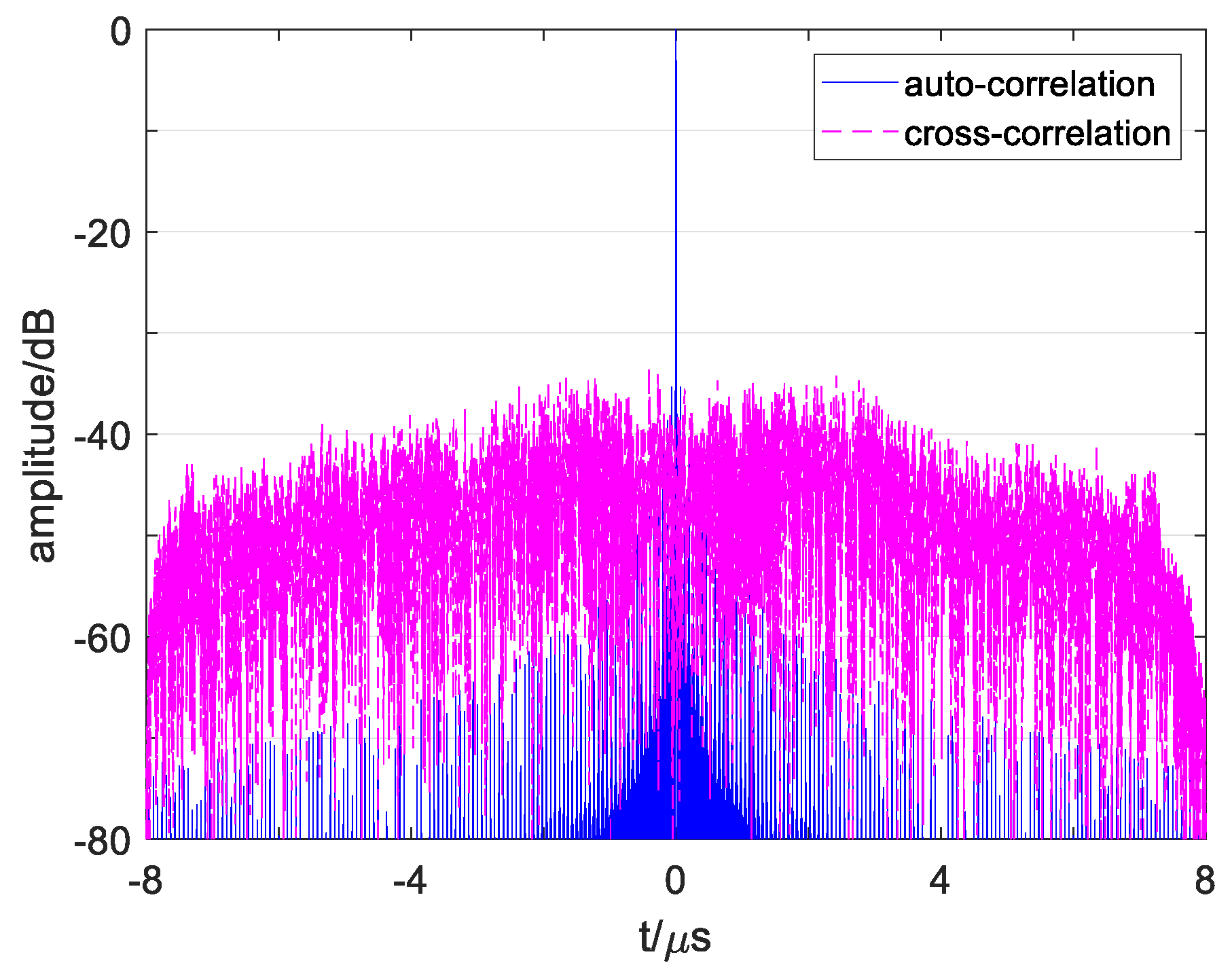 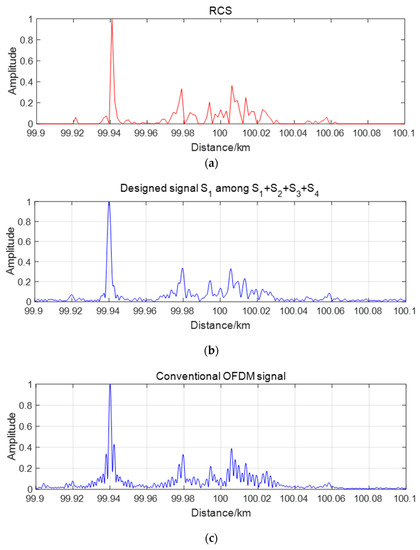