With the development of Industry 4.0, wireless sensor networks (WSNs) have great application prospects for industrial scenarios due to their advantages over traditional wired networks [1,2,3,4]. However, fully-automated mechanized operations and the wireless communication environments make the industrial wireless sensor networks (IWSNs) have stronger requirements for high security and low latency [5]. M.Luvisotto et al. [6] mentioned that the response delay in IWSNs should be in milliseconds. Moreover, under the edge computing (EC) system in IWSNs, some sensor nodes are in some completely security-free environments because there are no redundant computing resources and transmission resources. Therefore, lightweight authentication is urgently needed to enhance the security of IWSNs while ensuring low latency. The encrypted methods [7,8] are too heavy to support the nodes due to complex computing. I. Bhardwaj et al. [9] did some lightweight processing on the password, but their method still cannot meet some specific requirements. Some other researchers proposed a fast cross-authentication scheme that combines non-cryptographic and cryptographic algorithms to solve the security and latency issues [10]. In addition, the heterogeneous nature of the IWSNs makes traditional encryption-based authentication methods more complex to implement or manage. However, physical (PHY) layer methods provide some new approaches to protect the lightweightIWSNs. The high authentication rate and low cost are especially valued for such applications. By introducing deep learning (DL) into the PHY-layer authentication method, under the EC system, the training is performed under the edge devices, and the sensor nodes almost do not bear any extra costs.
D. Christin et al. [1] surveyed related WSN technologies dedicated to industrial automation from the aspects of security and quality of service (QoS). The work in [4] presented a QoS framework for IWSNs guaranteeing the delay bound and the target reliability. N. Neshenko et al. [11] surveyed the challenges and research problems in the Internet of Things (IoT) including intrusion detection systems, threat modeling, and emerging technologies. However, the papers mentioned above only address the security and reliability issues from the perspective of the system architecture or simply give a direction for future research. L. Xiao et al. [12] proposed a method to enhance the security of underwater sensor networks exploiting the power delay profile of the underwater acoustic channel to discriminate the sensors. The article [13] presented a two-factor user authentication protocol using the hash function that protects against other attacks in wireless sensor networks, with the exception of denial of service (DoS) and node attacks. However, the traditional security methods have relatively large requirements on computing resources and communication resources, which cannot meet the requirement of low latency.
PHY-layer authentication can achieve lightweight authentication and effectively address the tradeoff between the security and low latency requirement of the wireless sensor networks in industrial scenarios. The PHY-layer authentication methods can distinguish the legitimate sensor nodes and illegal ones by physical layer channel information, such as channel state information (CSI) [14,15,16,17], received signal strength indicator (RSSI) [18,19,20], received signal strength (RSS) [21], and the radio frequency (RF) fingerprint [22,23]. However, the PHY-layer authentication methods mentioned above based on the hypothesis test are mostly compared with a threshold to distinguish users, which makes it difficult to discriminate multi-nodes at the same time. Authenticating multi-nodes simultaneously is a multi-classification problem, which needs to be solved urgently.
Deep learning has a large number of applications, such as computer vision, image classification, pattern recognition [24,25,26], and so on. There are considerable research works using deep learning in wireless communications, such as in channel estimation and channel prediction. P. Illy et al. used machine learning to enhance the security of edge computing by implementing intrusion detection [27]. The paper [28] used the deep neural network to estimate the CSIs in orthogonal frequency division multiplexing (OFDM) systems. The work in [29] proposed a Raleigh fading channel prediction scheme with a deep learning method. N. Wang et al. [30] proposed a physical-layer authentication scheme based on extreme learning machine to detect spoofing attack. The DL-based PHY-layer authentication methods proposed in this paper can achieve multi-user authentication in a short time.
Unlike the traditional test-threshold-based PHY-layer authentication, the DL-based PHY-layer authentication methods can distinguish multiple sensor nodes simultaneously and maintain excellent performance. In the EC system, multi-sensor nodes need to be authenticated simultaneously, which is suitable for using the DL-based methods. The DL-based authentication methods are usually divided into the offline training phase and online authentication phase. The PHY-layer authentication framework we proposed in this paper also includes an online retraining process. In summary, the DL-based sensor nodes’ authentication algorithms proposed in this paper, utilizing the spatial diversity of wireless channels, can discriminate the sensor nodes without the test thresholds and have more practical application values. The main contributions of our work can be summarized as follows:
The rest of this paper is organized as follows. We present the preliminaries and system model in Section 2 and Section 3, respectively. The DL-based PHY-layer authentication method in industrial wireless sensor networks is proposed in Section 4. We provide numerical experiments in Section 5. The experiment in a practical environment and conclusions are presented in Section 6 and Section 7, respectively.
The symbols used in this article are briefly described as follows. Uppercase bold letters are used for the matrix (e.g., , ) and lowercase bold letters for vectors (e.g., , ). The elements are represented by the letters with subscripts and not bold (e.g., , ).

Due to the inherent characteristics of the wireless channels, the transmitted signals may experience a series of attenuations, such as, multipath effects, fading, shadowing, and delay distortion. The channel state information (CSI) provides us the channel variations experienced during propagations. In wireless communications, CSI represents the channel properties of a communication link. The CSI needs to be estimated by the receiver to detect the transmitted signals.
In the wireless fading channel, the system is modeled as: where and represents the receive and transmit signal, respectively. denotes the channel matrix, which is the CSI we mentioned above. denotes the additive white Gaussian noise vector, which follows a complex standard normal distribution. , where the mean value is zero and the noise covariance matrix is known. represents the channel’s frequency response, which can be estimated by and in the receiving end.

Generally speaking, DNN is a deeper version of the artificial neural network (ANN) through increasing the number of hidden layers in order to enhance the ability in representation or classification. As shown in Figure 1, it is a typical deep neural network with an input layer, multiple hidden layers, and an output layer. Each layer has a large number of neurons. The input of each neuron is the output of the upper neuron multiplied by the corresponding coefficient, and the output of each neuron is the input activated by activation functions. For example, the output of the first neuron in the first hidden layer is: where denotes the weight coefficient of links and . denotes the threshold coefficient of . represents the activation function. Common activation functions are the sigmoid function, the rectified linear unit (ReLU) function, and the soft-max function, defined as , , , respectively, where is a vector and denotes the -norm. Usually, the hidden layer and output layer use the ReLU function and the soft-max function, respectively. The output of layer is given by:
We use the to represent the operation of each layer of neurons. Then, we have the output of the deep neural network,
The application of the neural network is executed in two steps, a training phase and an identification phase. When in the training phase, the input data (i.e., CSI) of the input layer and the corresponding label are known. Then, we train the parameters and by minimizing the cost function by the gradient descent method, which is formulated as: where represents the value of the loss function. The loss function usually uses a mean squared error function or a cross entropy function, which is given by: or: where denotes the transpose of the matrix or vector.
In the identification phase, the label of the input data (i.e., CSI) is unknown. By inputting CSI to the neural network, its corresponding output will be used to identify and classify the input CSI.

In our previous work, we briefly introduced the physical layer channel authentication based on CNN [31]. This paper will further improve the CNN algorithm and propose a rapid-DNN-based PHY-layer authentication algorithm to meet the low latency requirements of industrial wireless sensor networks.

Special thanks to the Engineering Center of UESTCfor the experimental scene they provided. 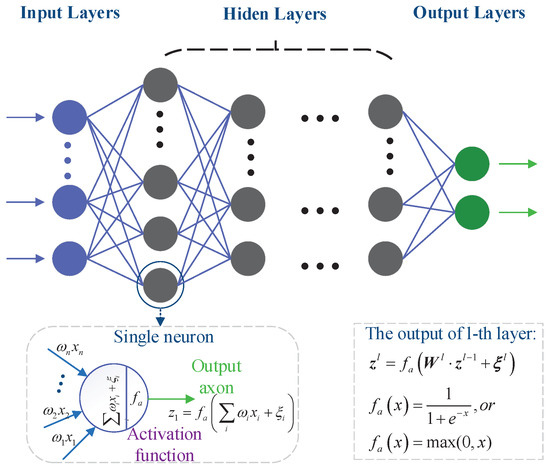 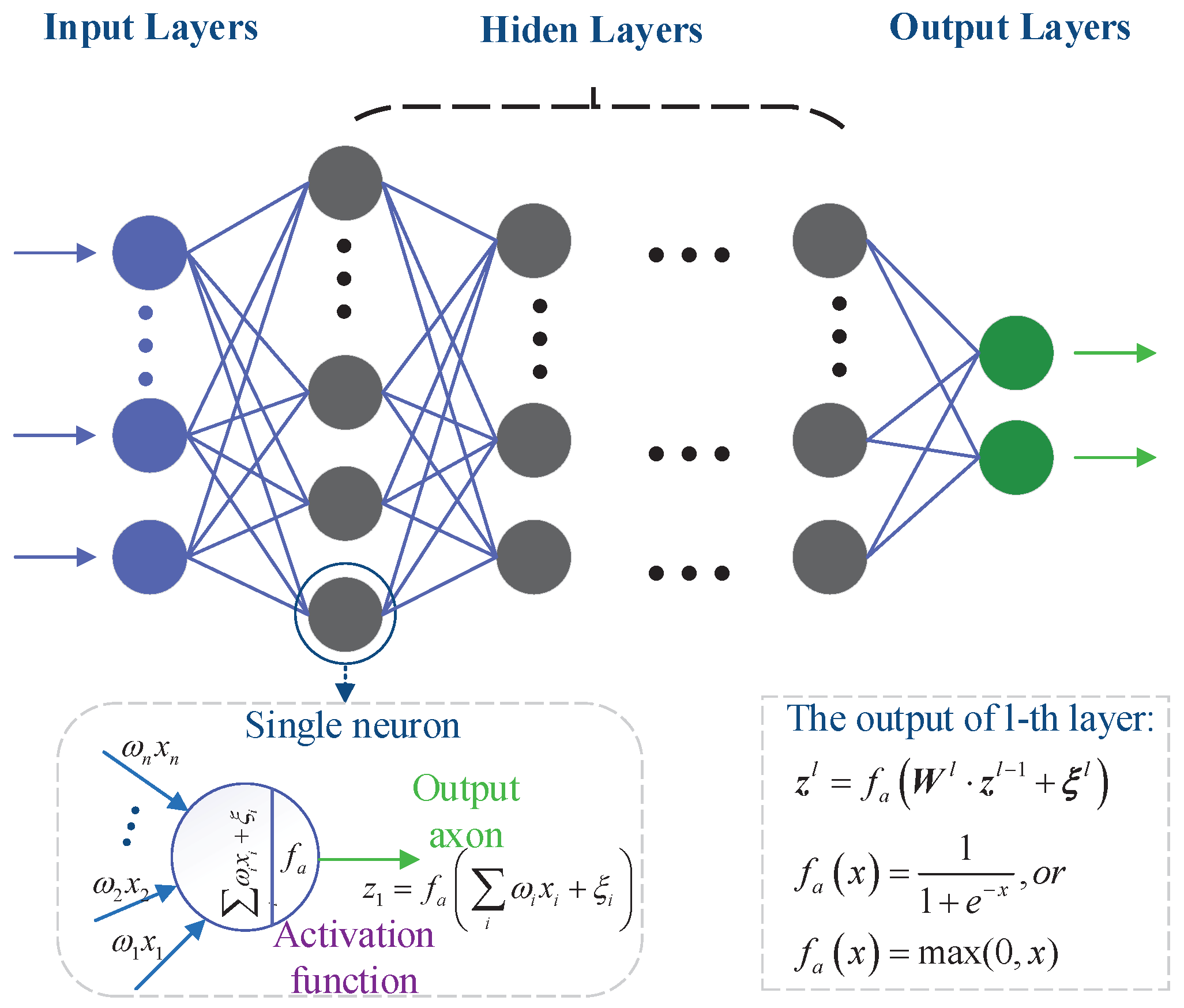 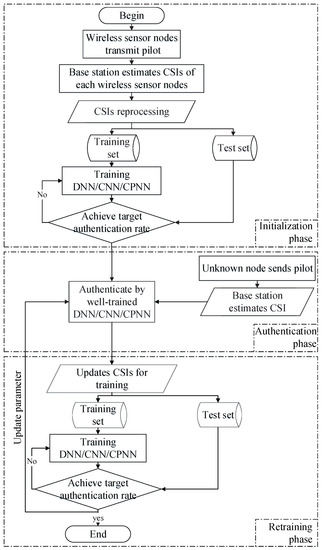 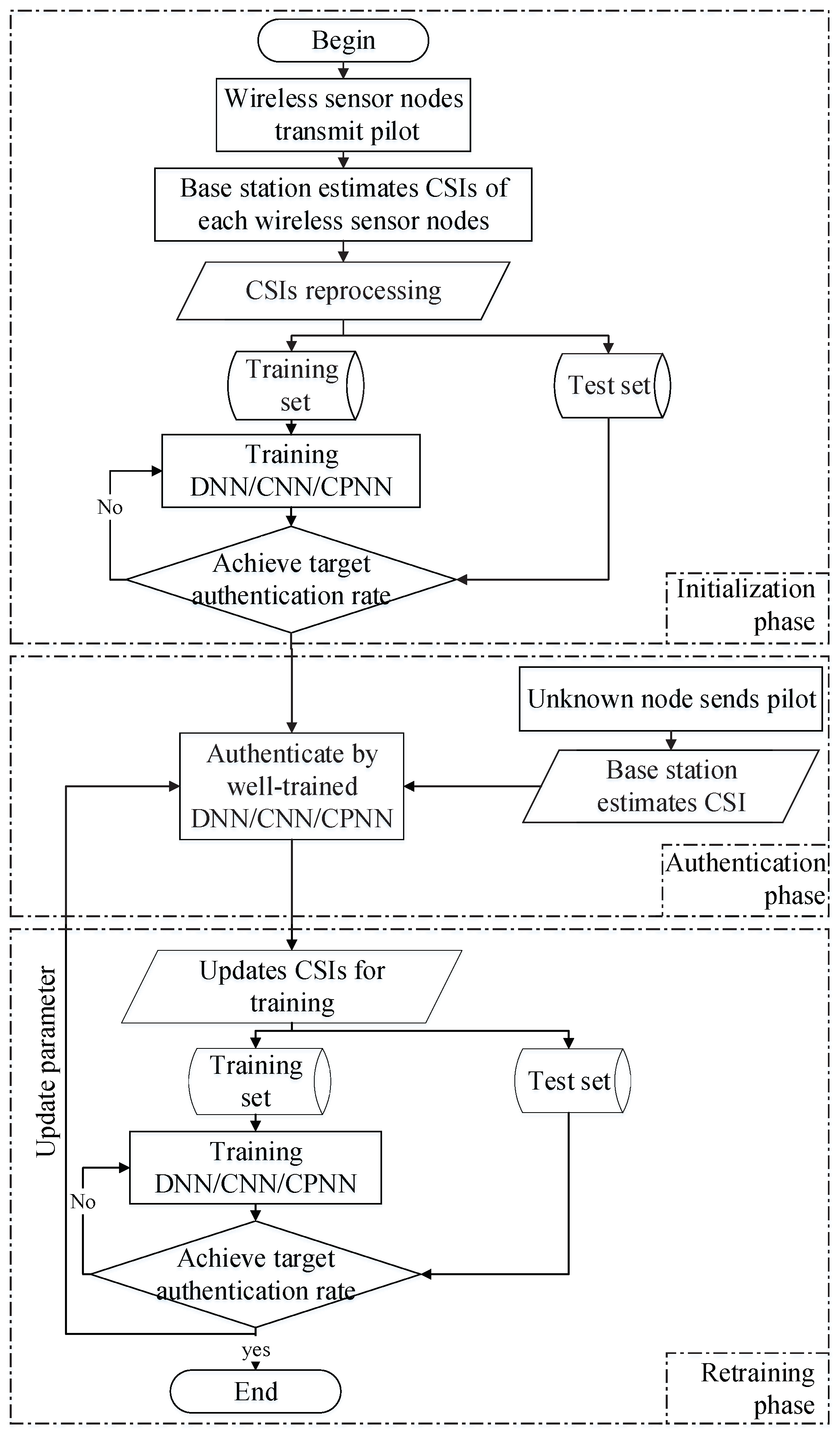 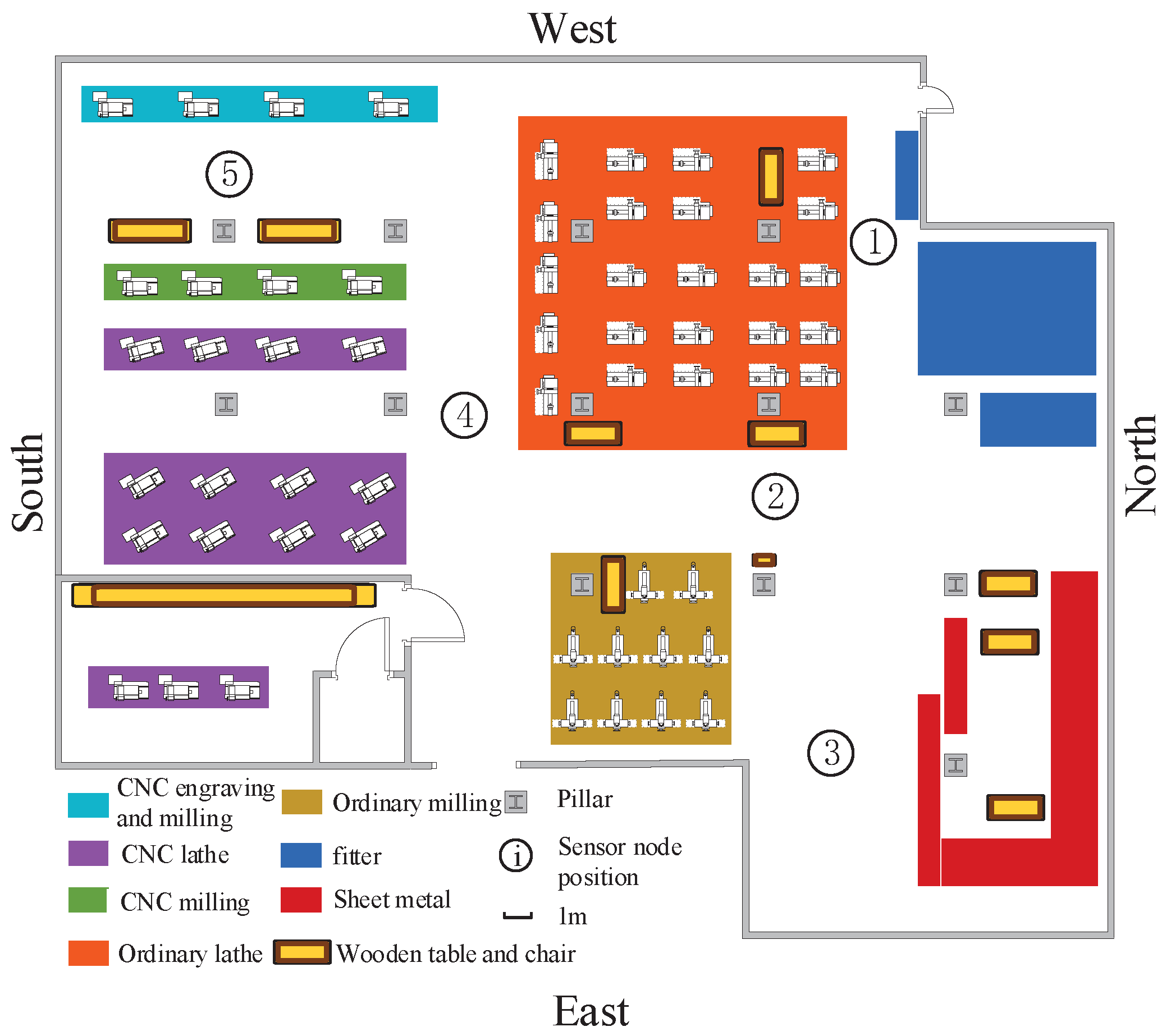 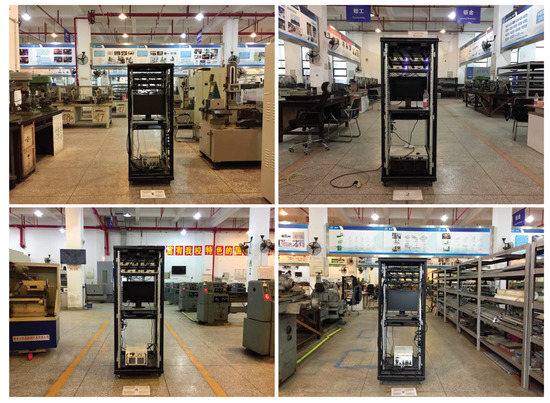 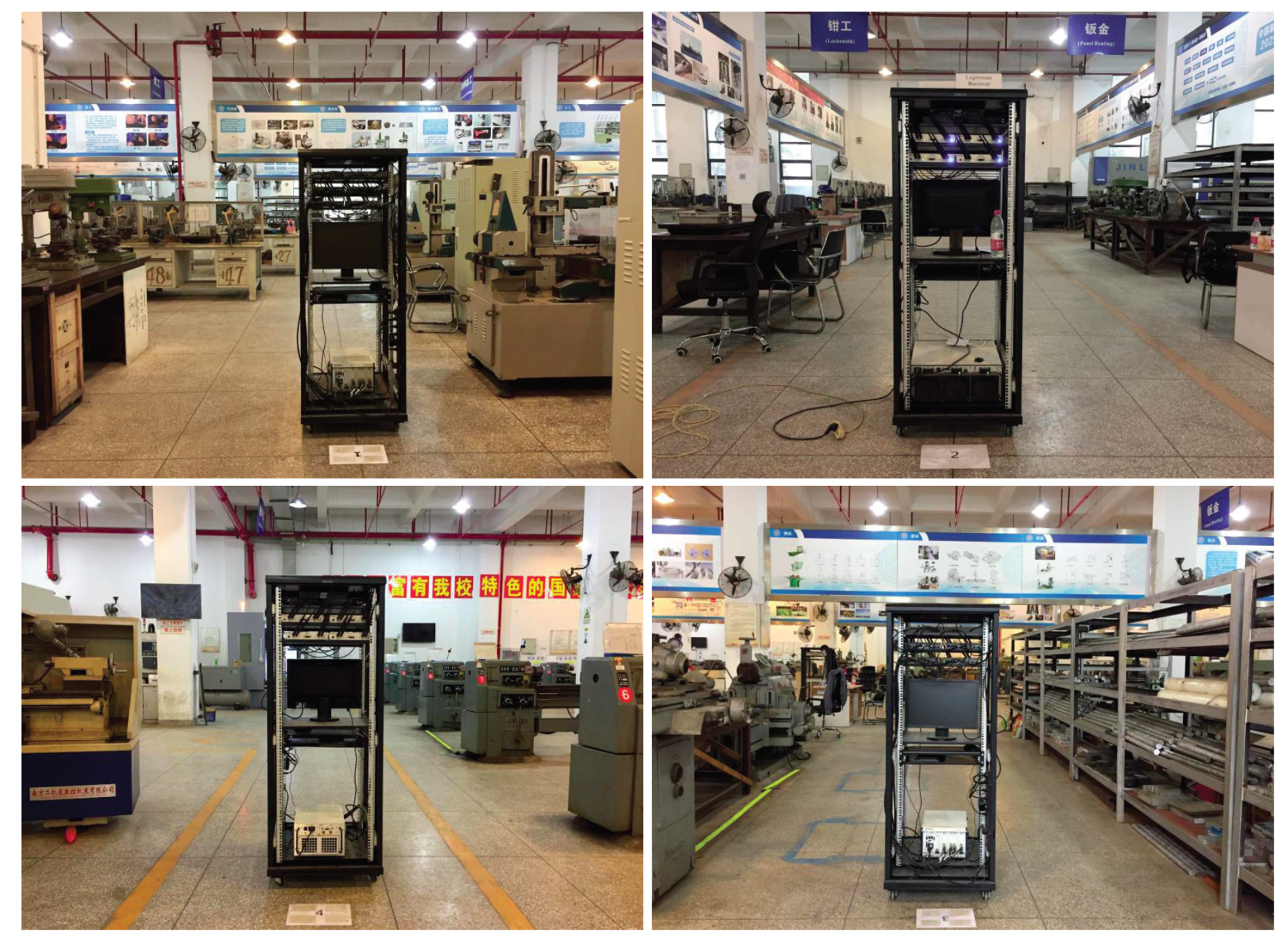 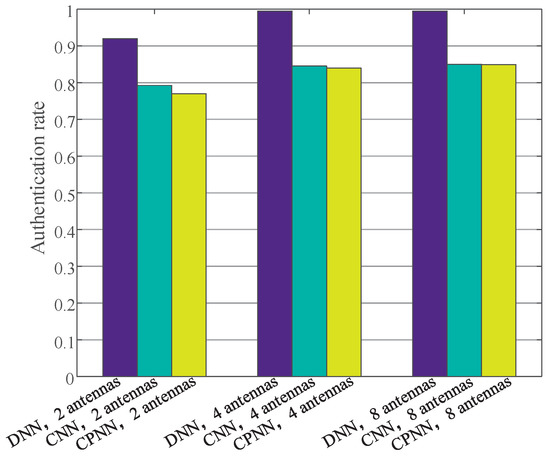