A nanostructured electrochemical bi-sensor system for the analysis of milks has been developed using the layer-by-layer technique. The non-enzymatic sensor [CHI+IL/CuPcS]2, is a layered material containing a negative film of the anionic sulfonated copper phthalocyanine (CuPcS) acting as electrocatalytic material, and a cationic layer containing a mixture of an ionic liquid (IL) (1-butyl-3-methylimidazolium tetrafluoroborate) that enhances the conductivity, and chitosan (CHI), that facilitates the enzyme immobilization. The biosensor ([CHI+IL/CuPcS]2-GAO) results from the immobilization of galactose oxidase on the top of the LbL layers. FTIR, UV–vis, and AFM have confirmed the proposed structure and cyclic voltammetry has demonstrated the amplification caused by the combination of materials in the film. Sensors have been combined to form an electronic tongue for milk analysis. Principal component analysis has revealed the ability of the sensor system to discriminate between milk samples with different lactose content. Using a PLS-1 calibration models, correlations have been found between the voltammetric signals and chemical parameters measured by classical methods. PLS-1 models provide excellent correlations with lactose content. Additional information about other components, such as fats, proteins, and acidity, can also be obtained. The method developed is simple, and the short response time permits its use in assaying milk samples online. View Full-Text
Keywords: electronic tongue; milk; galactose; phthalocyanine; chitosan; ionic liquid; LbL sensor electronic tongue; milk; galactose; phthalocyanine; chitosan; ionic liquid; LbL sensor
►▼ Show Figures 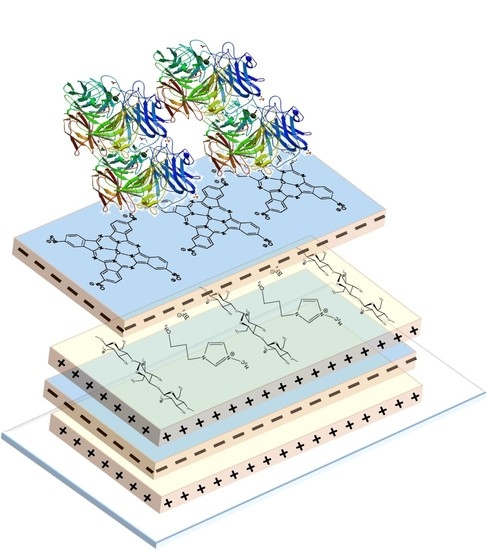