This work presents a visual information fusion approach for robust probability-oriented feature matching. It is sustained by omnidirectional imaging, and it is tested in a visual localization framework, in mobile robotics. General visual localization methods have been extensively studied and optimized in terms of performance. However, one of the main threats that jeopardizes the final estimation is the presence of outliers. In this paper, we present several contributions to deal with that issue. First, 3D information data, associated with SURF (Speeded-Up Robust Feature) points detected on the images, is inferred under the Bayesian framework established by Gaussian processes (GPs). Such information represents a probability distribution for the feature points’ existence, which is successively fused and updated throughout the robot’s poses. Secondly, this distribution can be properly sampled and projected onto the next 2D image frame in , by means of a filter-motion prediction. This strategy permits obtaining relevant areas in the image reference system, from which probable matches could be detected, in terms of the accumulated probability of feature existence. This approach entails an adaptive probability-oriented matching search, which accounts for significant areas of the image, but it also considers unseen parts of the scene, thanks to an internal modulation of the probability distribution domain, computed in terms of the current uncertainty of the system. The main outcomes confirm a robust feature matching, which permits producing consistent localization estimates, aided by the odometer’s prior to estimate the scale factor. Publicly available datasets have been used to validate the design and operation of the approach. Moreover, the proposal has been compared, firstly with a standard feature matching and secondly with a localization method, based on an inverse depth parametrization. The results confirm the validity of the approach in terms of feature matching, localization accuracy, and time consumption. View Full-Text
Keywords: omnidirectional imaging; visual localization; catadioptric sensor; visual information fusion omnidirectional imaging; visual localization; catadioptric sensor; visual information fusion
►▼ Show Figures 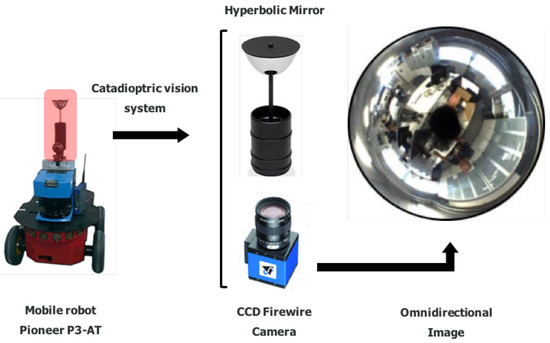