Alzheimer’s disease (AD) represents the prevalent type of dementia in the elderly, and is characterized by the presence of neurofibrillary tangles and amyloid plaques that eventually leads to the loss of neurons, resulting in atrophy in specific brain areas. Although the process of degeneration can be visualized through various modalities of medical imaging and has proved to be a valuable biomarker, the accurate diagnosis of Alzheimer’s disease remains a challenge, especially in its early stages. In this paper, we propose a novel classification method for Alzheimer’s disease/cognitive normal discrimination in structural magnetic resonance images (MRI), based on the extension of the concept of histons to volumetric images. The proposed method exploits the relationship between grey matter, white matter and cerebrospinal fluid degeneration by means of a segmentation using supervoxels. The calculated histons are then processed for a reduction in dimensionality using principal components analysis (PCA) and the resulting vector is used to train an support vector machine (SVM) classifier. Experimental results using the OASIS-1 database have proven to be a significant improvement compared to a baseline classification made using the pipeline provided by Clinica software. View Full-Text
Keywords: Alzheimer’s disease; histon; superpixels; supervoxels; MRI; PCA; SVM; classification Alzheimer’s disease; histon; superpixels; supervoxels; MRI; PCA; SVM; classification
►▼ Show Figures 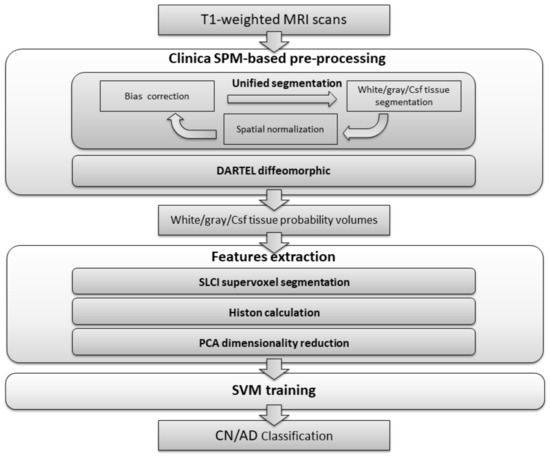