Coastal plant communities around the world are being altered or completely lost by sea level rise (SLR) and land-use change [1,2,3]. The global extent of mangroves and associated coastal wetland communities, which are important wildlife and rare species habitats, has shrunken as a result of climate change and anthropogenic disturbance [1,4,5,6], threatening species of concern [4,7]. A plant community migrates as a response to ecological pressures to which it is exposed; therefore, a spatially explicit and quantitative understanding of an ecosystem’s plant community matrix at high spatial and thematic precision is essential for monitoring subtle ecosystem change [4,6] and predicting future species’ habitats. To better understand how mangrove communities are responding to large-scale ecological change, accurate mapping techniques are needed that differentiate both mangrove species community types and adjacent higher-elevation plant communities [4,6].
A number of researchers have had success accurately classifying wetland and mangrove communities using a combination of data sources [4,6,8,9,10,11]. Seasonal differences in phenological stages of various species within a plant community result in variability of spectral signatures that can be utilized to improve classification accuracy [9,12]. Multi-temporal satellite imagery has been shown to accurately classify wetland plant communities over distinct phenological time periods [13,14,15]. In France, multi-spectral, multi-seasonal imagery was combined with Light Detection and Ranging (LiDAR) data to accurately classify wetland vegetation [4,16]. In ecosystems with two distinct seasonal patterns, bi-seasonal imagery can capture these seasonal differences in plant phenology and, therefore, provide spectral signatures that can help differentiate communities that would otherwise be difficult to distinguish remotely [17,18].
Using bi-seasonal satellite data to capture differences in plant phenology has been successful in mapping some plant communities [17,18,19]. Because non-native willows (Salix spp.) are deciduous during cooler months, reducing shortwave infrared light absorption, Noonan and Chafer [11] satisfactorily used a composite image from bi-seasonal satellite for observation of Earth imagery (SPOT-5) during autumn (complete willow leaf cover) and winter (bare leaf cover) to generate spectral signatures that were distinct from signatures of the adjacent native, evergreen, and riparian vegetation. South Florida’s Everglades, the region for this study, has two distinct seasons, wet (June–October) and dry (November–May) [20]. Bi-seasonal satellite imagery was effective in discriminating plant communities in the freshwater Everglades [18] but has not been evaluated for the coastal fringe. Everglades coastal communities undergo drought and salt stress during the dry season as compared to the wet season [7,21]. Plant communities display drought and salinity stress through changes in their leaf physiology [22,23] that then affect the spectral signature they produce [24]. South Florida coastal forests, including buttonwood forests, exhibit seasonality in litterfall, which tracks seasonality in leaf production, generally displaying a high wet/low dry pattern in litterfall biomass [25]. These seasonal phenological patterns documented in the field suggest that the use of bi-seasonal data for remotely-sensed classification of the Everglades coastal fringe may be a viable option.
Florida’s southern coast in Everglades National Park (ENP), FL, USA, has three mangrove and four coastal plant community types that are distributed across the landscape as a response to elevation, salinity, and inundation time [7,26,27,28]. The Buttonwood Embankment, which harbors these communities, is an approximately 60 × 1 km2 stretch of elevated land averaging 45 cm above sea level along the southern tip of Florida [29,30]. The Embankment provides habitat for the entire mainland range of the federally endangered plant Chromolaena frustrata (B.L.Rob.) R.M.King & H.Rob., as well as several state endangered plant species [7]. Historically, freshwater flowed from the north toward saline Florida Bay, forming fresh waterbodies to the north of the embankment [27,31]. Because of the low elevation gradients in the area, small increases in sea level or decreases in freshwater head can have large impacts on plant communities and, therefore, species of concern [7]. Today, after 100 years of SLR and anthropogenic drying of the Everglades ecosystem, the waterbodies to the north of the embankment are now brackish to marine [27].
Various habitat types in the southern coastal Everglades harbor different rare plant species [7] and small changes in elevation influence species composition [28,32,33], thus detecting subtle changes in plant composition at high spatial precision along the mangrove fringe is important for rare species habitat monitoring. There are two buttonwood forest communities distinguished by different understory vegetation in our study area; one harbors glycophyte species, including C. frustrata, while the other is slightly lower in elevation, dominated by halophytic species, and does not have C. frustrata. Our overall objective, in this study, was to create a detailed map of the vegetation communities in our study area, including distinguishing C. frustrata habitat. With a base map, we can produce future maps of the site in order to monitor change that may impact the rare species. Because this area has not been mapped at the spatial resolution necessary for such monitoring, our research objective was to assess whether using bi-seasonal, multi-spectral satellite data with high spatial resolution would be more effective in separating plant communities than would data from a single season. We also evaluated which community types benefited most from bi- versus single-season data.
Model-based accuracies showed that the combination of data sources was successful in distinguishing the three mangrove species and the other four coastal plant communities in the study area with an overall accuracy of 86%. We showed that bi-seasonal data more accurately distinguished plant community types than either single season alone. Additionally, we were able to distinguish buttonwood/glycophyte forest—the habitat harboring the federally endangered C. frustrata—from adjacent buttonwood/halophyte forest at a greater accuracy than when using single-season data. Black and red mangroves had the greatest percent cover, while the highest elevation plant community—tropical hardwood hammock—had the least percent cover. The percent cover for each of the community types provides an understanding of the current plant community matrix in the area mapped. These data, which are both spatially explicit and quantitative, provide a baseline to monitor future changes in mangrove and other coastal plant communities.

The study area was a 71 km2 strip along the coast of Everglades National Park (ENP) (25°19′0″ N, 80°56′0″ W) in southern Florida, U.S.A. (Figure 1). Southern Florida is humid and subtropical with a distinct warm (mean 25 °C) wet season from June to October and cool (mean 16 °C) dry season from November to May [20]. Average annual rainfall is between 1000 to 1630 mm with more than half the rain falling between June and September and often coming from hurricanes and tropical storms. April and May are usually the driest months [20,34].

(1)
Black Mangrove Forest: This forest is dominated by black mangrove (Avicennia germinans (L.)) with few associated woody species [35], except for occasional white mangrove (Laguncularia racemosa (L.) C.F.Gaertn) or red mangrove (Rhizophora mangle L.) found in either the canopy or understory. At times, areas of young black mangrove forest have halophyte species in the understory. Black mangrove forests are considered the most salt-tolerant of the three mangroves found in south Florida [36].
(2)
Red Mangrove Forest: This forest is dominated by Rhizophora mangle in the canopy and has little to no understory vegetation [35]. Occasional A. germinans are found scattered throughout; L. racemosa is found even less commonly. Red mangrove forests are considered the most inundation-tolerant of the three mangrove types and are less salt-tolerant than black mangroves [36].
(3)
White Mangrove Forest: This forest is dominated by Laguncularia racemosa in the canopy; often halophytes such as Batis maritima L., Sarcocornia perennis (Mill.) A.J. Scott, and Suaeda linearis (Elliott) Moq. are found in the understory. This community is most often found in irregularly flooded areas [35] and is the least salt- and inundation-tolerant of the three mangrove species found in south Florida [36].
(4)
Buttonwood/Glycophyte Forest: Buttonwood (Conocarpus erectus L.) is the dominant canopy species of buttonwood forests, but other woody species and a diverse herbaceous understory are also found in this community [37]. Temperature, salinity, tidal fluctuation, substrate, and wave energy influence the size and extent of buttonwood forests [38], which often grade into salt marsh, coastal berm, rockland hammock, coastal hardwood hammock, and coastal rock barren [38]. This community sustains freshwater flooding during the wet season and is dry during the dry season [38]. Buttonwood forests (mean elevation 29 ± 3 cm) maintain an average groundwater table of −33 ± 1 cm and (26–29.5) ± 0.4‰ groundwater salinity [7,37].
(5)
Buttonwood/Halophyte Forest: C. erectus is the only canopy tree species in buttonwood/halophyte forests. The understory is comprised of halophytic species such as Batis maritima, Borrichia frutescens (L.) DC., Distichlis spicata (L.) Greene, Sarcocornia perennis, and Suaeda linearis [37]. Buttonwood/halophyte forest (also called buttonwood prairies [37]) (mean elevation 18 ± 3 cm) show a mean groundwater table at −32 ± 2 cm and average groundwater table salinity of 38.8 ± 0.6‰ [37].
(6)
Halophyte Prairie: These prairies are comprised of Batis maritima, Borrechia frutescens, D. spicata, Sarcocornia perennis, and Sueda linearis, as well as other less common species; there is no canopy species [37]. Halophyte prairies have marl soils and slightly higher elevation than adjacent black and white mangrove forests [33]. In halophyte prairies, standing water that is brackish to freshwater is present for months during the wet season. Evaporation and lack of drainage cause these communities to become hypersaline during the dry season [32].
(7)
Coastal Tropical Hardwood Hammocks: Coastal tropical hardwood hammocks are biodiverse. This community includes a variety of tropical tree and shrub species [7,35] and a different suite of herbaceous species than are found in the mangrove communities [7]. Ground cover is often limited in closed canopy areas and abundant in areas where canopy disturbance has occurred or where this community intergrades with buttonwood forest [7]. Coastal tropical hardwood hammocks are the least salt-tolerant of all the coastal community types and reside at the highest elevation (mean elevation 29 ± 3 cm) [37].

Two invasive species, Schinus terebinthifolius Raddi (Brazilian pepper) and Colubrina asiatica (L.) Brongn (latherleaf), were prominent in the area and found across several forest types, causing confusion during the classification process; we created a classification category for each of these species to improve accuracy in the other community types. We also included a class for mud flats, which were open areas of bare soil or areas covered with periphyton mats, and a class for open water.

2.3. Classifier Evaluation and Community Prediction for the Study Area

Distinguishing the seven plant communities in our study area, model-based accuracy was highest for the bi-seasonal feature dataset when compared to wet- or dry-season alone (Table 2). The bi-seasonal dataset also showed lower class-specific omission errors across all community types than either the wet- or dry-season data (Table 2).
The feature that had the largest mean decrease in accuracy when dropped from the feature set differed among models. For the bi-seasonal and wet-season models, NDVI had the greatest mean decrease in accuracy (15% and 18%, respectively), while for the dry season the DTM contributed most to the overall accuracy (mean decrease in accuracy = 16%). For the dry season model, NDVI was only the 15th most important variable out of 34 total. The DTM ranked second in importance for the bi-seasonal and wet season models, while the reflectance mean for Short-Wave Infared-2 (SWIR) (band 8) was second for the dry season. The feature set that provided the highest separability between the two buttonwood communities was the wet season data (Table 2). For the dry and the bi-seasonal data set, the 3 × 3 mean SWIR-1 (band 7) of the dry season image was the most important spectral information in detecting the buttonwood-glycophyte class, and for the wet season, it was the mean of SWIR-2 (band 8) in detecting buttonwood/halophyte. 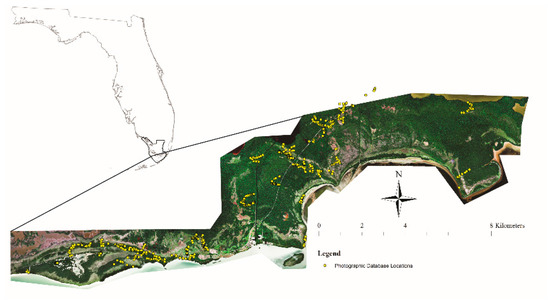 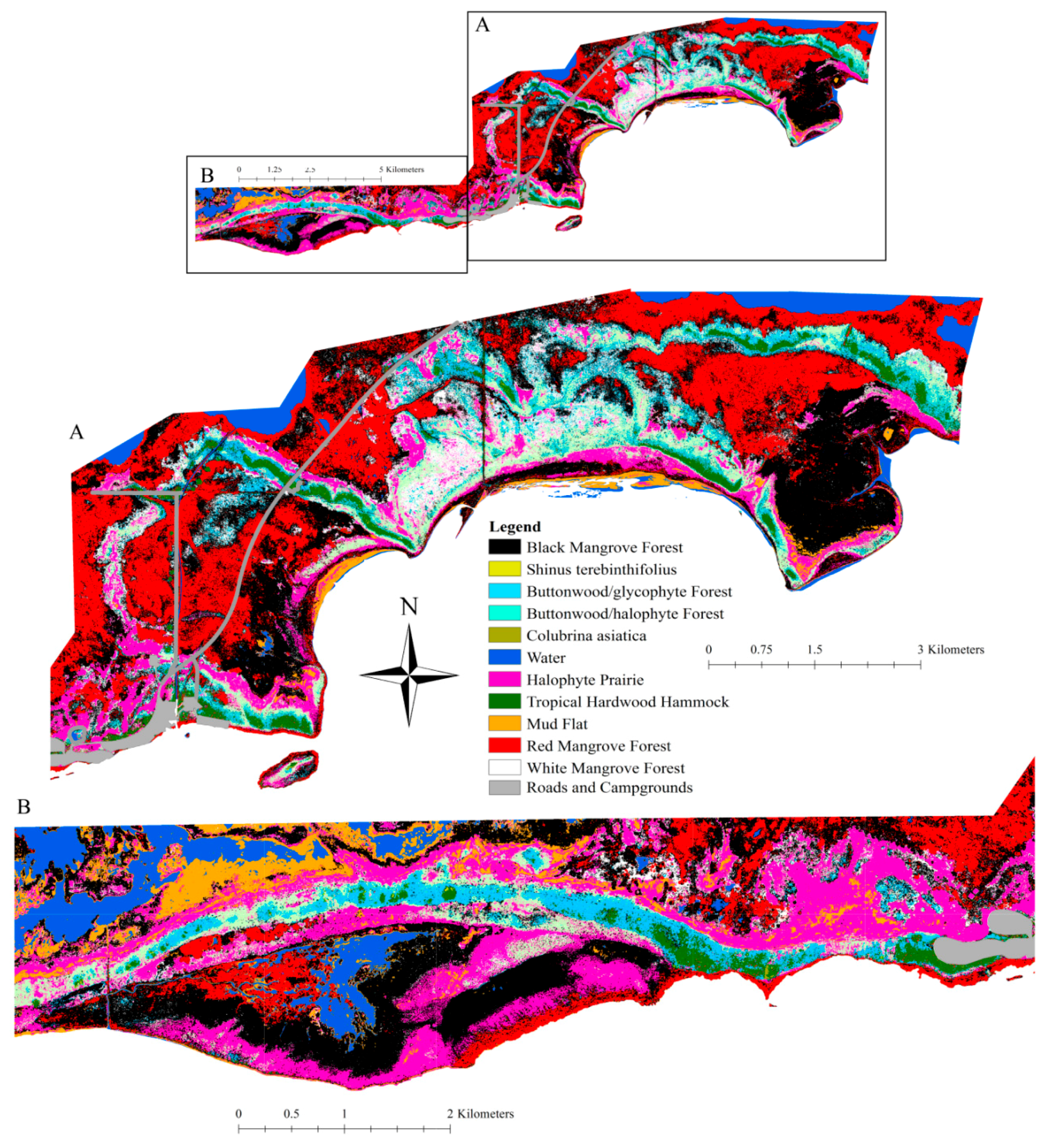