Fifth generation (5G) wireless networks are expected to support higher spectral efficiency, lower end-to-end latency, and more connection nodes [1]. In accordance with this trend, many promising techniques are being considered [2]. Among them, a non-orthogonal multiple access (NOMA) technique has been proposed to improve the spectral efficiency of the 5G network [3]. The basic idea of the NOMA technique is to serve multiple users at the same time-frequency-space resource block via power domain or code domain multiplexing [4]. It has been known that the NOMA technique increases the spectrum efficiency and efficiently accommodates a massive number of nodes in cellular networks [5,6].
As noted before, the NOMA techniques are, in general, classified into two categories: code-domain NOMA and power-domain NOMA [7]. With the code-domain NOMA techniques, a codeword is allocated to each user and a near optimal multi-user detection algorithm, such as a message passing algorithm, is used at the receiver. The code-domain NOMA techniques include trellis-coded multiple access (TCMA), interleave-division multiple access (IDMA), low-density signature (LDS) sequence-based code division multiple access (CDMA), sparse-code multiple access (SCMA), pattern-division multiple access (PDMA), multi-user shared access (MUSA), etc. [8]. On the other hand, with the power domain NOMA techniques, multiple users are served within a given time-frequency-space resource block by using superposition coding (SC) at the transmitter and successive interference cancellation (SIC) at the receivers, respectively, which has recently been proposed in 3GPP LTE [3].
Multi-user superposition transmission (MUST) is a special case of the NOMA techniques, which has been studied in 3GPP LTE standards [9]. Various NOMA techniques have been proposed and studied, focusing on multi-user non-orthogonal transmission schemes, receiver designs, and related signaling strategies in [9]. The MUST techniques are divided into three categories according to adaptive power control and bit-labeling at the transmitter side as shown in Table 1. The adaptive power ratio on each component constellation is utilized in MUST categories 1 and 2, and Gray-mapped composite constellation is adopted in MUST categories 2 and 3. The MUST techniques typically assume asymmetric downlink scenarios consisting of active cell-edge and cell-center users. At the receiver side, the cell-center user with higher received signal power decodes a super-imposed signal with SIC, while the cell-edge user with lower received signal power decodes the super-imposed signal by treating the interference signal as noise. To implement SIC at the cell-center user, codeword-level (channel coding block) SIC results in better performance than symbol-level SIC, but the signaling overhead and implementation complexity of the codeword-level SIC is much higher that of the symbol-level SIC [10,11]. Thus, the codeword-level SIC may not be suitable in the cellular downlink, especially when the low-cost and low-power user terminals/devices are considered.
Recently, several receiver designs of the NOMA techniques, including codeword-level SIC and symbol-level SIC, have been compared with each other. In particular, a log-likelihood ratio (LLR)-based low-complexity receiver design was proposed [12]. Although the LLR-based receiver design does not include the codeword-level SIC operation which accompanies high implementation complexity, it can still achieve similar performance to the codeword-level SIC receiver as well as the ideal SIC receiver. However, the performance of the proposed technique was evaluated only through link-level simulations. In addition, another low-complexity MUST technique was proposed in [13], where a NOMA transmitter sends signals to a single cell-center user over multiple (frequency) resource blocks, each of which is also occupied by a cell-edge user. Thus, the cell-center user can obtain the frequency diversity, and we call this scheme diversity-controlled MUST technique in this paper. However, in [13], the rate outage performance was mathematically analyzed when there exist only two cell-edge users and each user is equipped with a single receive antenna.
In this paper, we extend the diversity-controlled MUST technique to the case where multiple cell-edge users are multiplexed with a single cell-center user and each user is equipped with multiple antennas. Henceforth, we define the user with a higher signal-to-noise ratio (SNR) as MUST-based user equipment (UE) and the user with a lower SNR as MUST-enhanced UE since the received SNR depends on not only the location of users but also the allocated power in the diversity-controlled MUST technique. In general, cell-center users become the MUST-based UEs and cell-edge users become the MUST-enhanced UEs. In particular, we derive the closed-form expressions on the bit error rate (BER) of both MUST-based UEs and MUST-enhanced UEs in Rayleigh fading channels for a given power allocation ratio. Based on the mathematical analysis, we also optimize the power allocation ratio on the component constellation to minimize the power consumption at the NOMA transmitter for given BER requirements. The mathematical analysis is validated via link-level simulations.
The remainder of the paper is organized as follows. In Section 2, the system model is described; in Section 3, we explain the overall procedures of both the transmitter and receiver with the proposed diversity-controlled MUST technique in detail and derive the BER of the proposed technique; in Section 4, we formulate an optimization problem of the power allocation ratio to minimize the power consumption at the NOMA transmitter; simulation results are shown in Section 5; finally, conclusions are drawn in Section 6.

In Section 3.1, we explain the transmitter design of the proposed diversity-controlled MUST technique including the bit-labeling and the power allocation at the BS. In Section 3.2 and Section 3.3, we explain the receiver designs for the MUST-based UE and the MUST-enhanced UE and mathematically analyze the BER of the two types of UEs, respectively.

3.1. Transmitter Design at the BS

Figure 2 shows the overall structure of the transmitter at the BS in the proposed diversity-controlled MUST technique. Bit-streams and enter to the BS, where M denotes the modulation order, i.e., . Bit-streams and denote the bit-streams for the i-th MUST-based UE and the MUST-enhanced UE, respectively. The term j indicates the j-th bit in an M-QAM symbol. According to the bit-labeling rule (Gray-mapping) of the MUST category 2, the bits of the MUST-enhanced UE are coded by the following function, :where ⊕ denotes a bitwise XOR operator. The Gray-mapped bit-streams and are then modulated by M-QAM. The modulated symbols to be sent via the i-th sub-carrier for the MUST-based UE and the MUST-enhanced UE are denoted by and , respectively. The and are assigned power by and , respectively. In this paper, we assume that is the same value for all i. Thus, the super-imposed signal in the i-th sub-carrier, , is given bywhere . Thus, .

3.2. Receiver Design at an MUST-Based UE

Figure 3 shows the overall structure of the proposed receiver at the MUST-based UE. Recall that the signal of the i-th MUST-based UE is assumed to be sent via the i-th OFDM sub-carrier. Then, the received signal of the i-th MUST-based UE with antennas is given bywhere indicates the transmit power of and denotes the wireless channel vector from the BS to the i-th MUST-based UE. We assume that is a fixed value over frequencies but it can be adaptively controlled to satisfy a certain performance requirement. We assume that each element of follows identically and independently distributed (i.i.d.) complex-valued normal Gaussian distribution, i.e., , where indicates the identity matrix of dimension . Furthermore, denotes the additive white Gaussian noise (AWGN) vector at the i-th MUST-based UE, i.e., , where indicates the power spectral density of the Gaussian noise.
With maximum ratio combining, the received signal vector at the MUST-based UE can be represented aswhere denotes the conjugate transpose matrix of . Let . Then, due to properties of the circular symmetric Gaussian random vector [11], can be represented by
Assuming that , determines the signs of as shown in Figure 1. In other words, and equal to and , respectively, where denotes the sign function. If , then according to the transmitter design. Thus, the decoding function for from is given as:where and denote the estimated bits for and , respectively. represents the QPSK demodulation function.
Table 2 summarizes the computation complexity of the proposed receiver at the MUST-based UE in terms of the complex number of operations.

3.3. Performance Analysis of the MUST-Based UE

3.4. Receiver Design at an MUST-Enhanced UE

3.5. Performance Analysis of the MUST-Enhanced UE

In this paper, we proposed a generalized diversity-controlled MUST technique for 5G downlink cellular networks, which can be easily implemented with low complexity. We mathematically analyzed the BER performance of the proposed diversity-controlled MUST technique in Rayleigh fading environments where the BS is equipped with a single antenna but each user is equipped with multiple antennas. To the best of our knowledge, this is the first time that the closed-form solution on the BER of the diversity-controlled MUST technique has been obtained even though there are several link-level simulation results in the literature. The mathematical analysis was validated via extensive link-level simulations with various system parameters. Furthermore, based on the mathematical analysis, the optimal power allocation framework was considered to minimize the power consumption at the BS for given BER requirements. We leave the case of multiple antennas at the BS for further study. 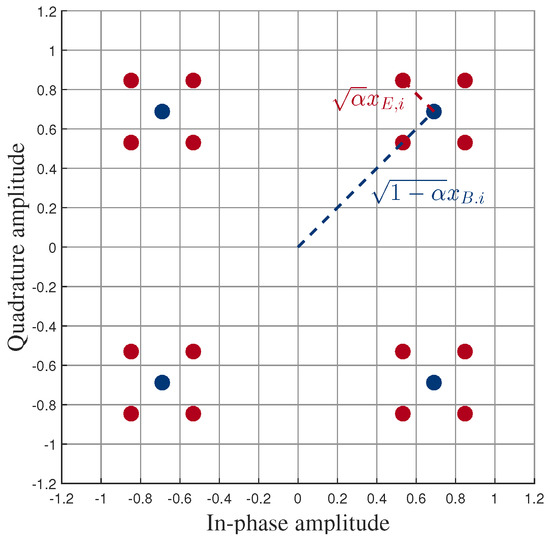 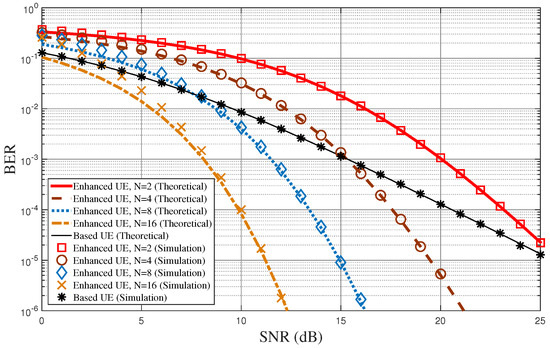 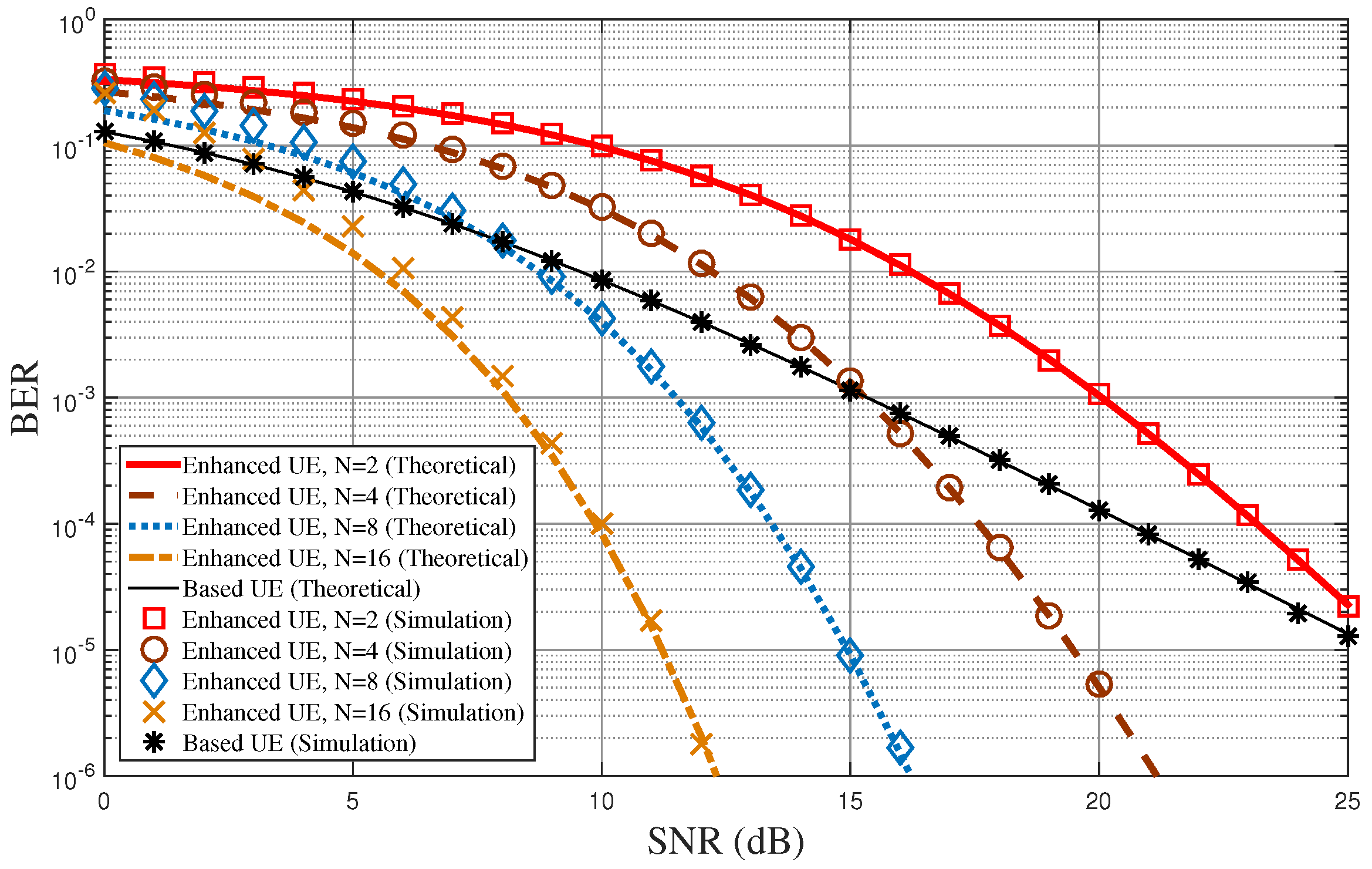 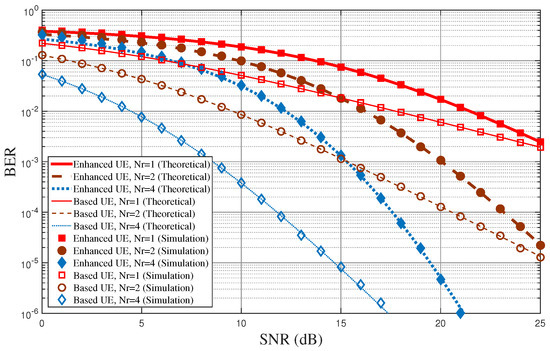 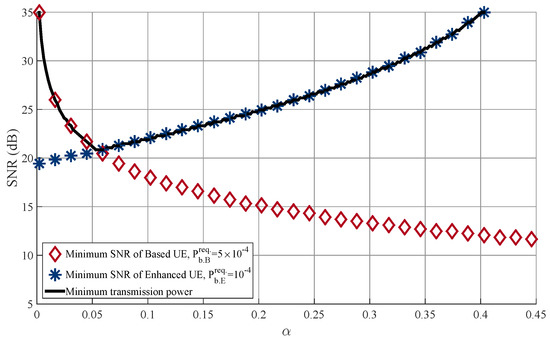 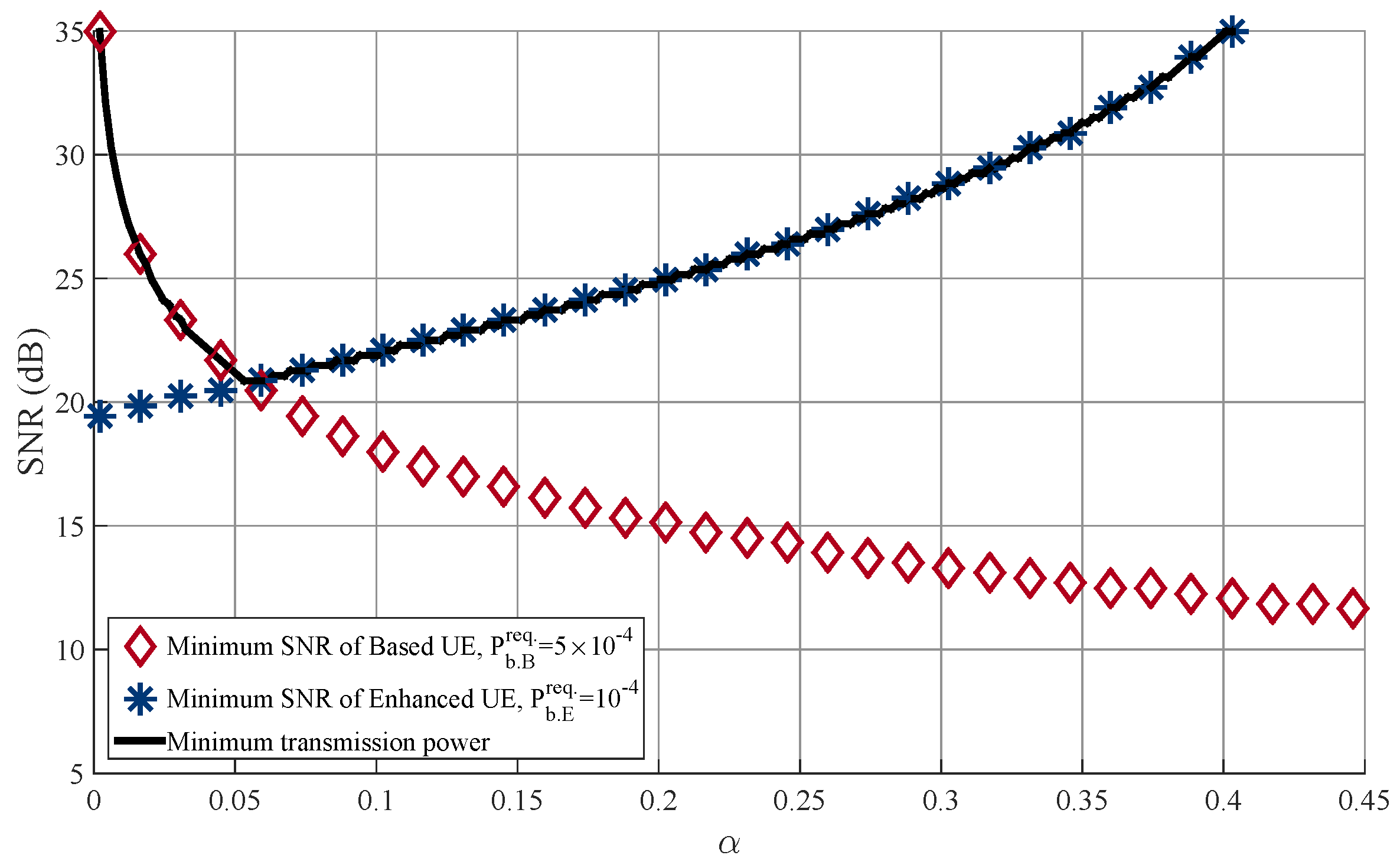