In this section, we present a brief overview of some fundamental concepts related to the network model, the ordinal potential game theory and the Theil index.

WSN are usually abstracted according to graph theory. Let be an undirected graph, where N denotes the set of nodes, L is a set of two-node communication links in node set N at time t, and P represents the transmit power set of n nodes.
It is assumed that all nodes are randomly deployed in the plane monitoring area. We only consider multi-hop network environments for wireless sensor network. We assume that every node is capable of adjusting its transmission power dynamically, i.e., a node can use a different power to reach each of its neighbors. The outcome of research on MAC-layer protocols [16] provides the feasibility of such an assumption. When the transmit power of node i is sufficiently large, the signal received by node j is higher than the receiving threshold p so that node j can respond.
Because most routing and channel studies use bidirectional links, it is assumed that the links in the network topology are bidirectional. Link bidirectionality is also crucial for proper functioning of MAC protocols such as 802.11 [17]. Hence, we assume that links in our network model must be bidirectional to be useful. When all nodes use their maximum power to communicate, the formed network topology is denoted by . In this design, is the connected network.

The Theil index [20] is a statistic primarily used to measure economic inequality and other economic phenomena. It was proposed by econometrician Henri Theil at Erasmus University in Rotterdam. This index measures income inequality through the concept of entropy in information theory [21]. Whereas the concept of the entropy index in information theory is used to measure the income gap, the income gap can be interpreted as the amount of information contained in the message that converts the population share into the income share. The Theil index T is defined as: where is a characteristic of agent i, represents average income, and N is the population. The range of the Theil index is . The larger is the value, the more obvious is the difference from the average.

In this section, a topology control game model is first constructed. Then, it is proved that the game model belongs to the ordinal potential game and the NE is Pareto optimal.

We show that the game with the utility function of each sensor given by Equation (4) is an ordinal potential game; then, the existence of NEs is guaranteed.
Theorem 1.
The game is an ordinal potential game. The ordinal potential function is given by:
Proof.
We apply the asserted ordinal potential game in Equation (4). First, we have:
Similarly,
Thus, we have:
For node i, because is monotonic and , it follows from Equation (6) that:
Therefore, , the function is the ordinal potential function of the strategy game, and the strategy game is the ordinal game. □
Theorem 2.
The NE of the topology game model established in this paper is Pareto optimal [18] if the network is connected.
Proof.
Due to the limited number of nodes, the number of nodes’ selectable transmit power sets is limited. According to [19], the finite ordinal potential game must converge to the NE (a strategy profile is a Nash equilibrium if no player can do better by unilaterally changing his or her strategy). According to the definition of the network model and the description of the utility function, a node maximizes the utility function by adjusting its own policy choice. The concrete manifestation is that the node continuously reduces the transmitting power and prolongs the survival time until the power of all nodes no longer changes; that is, the NE state is reached.
When a NE point is reached, if a node reduces its power, network connectivity will be destroyed. As a result, the remaining nodes must increase their power, thus resulting in lower utility function values of other nodes and disruption of the NE. Therefore, according to the Pareto optimal definition (in short, any form of resource reconfiguration is unlikely to benefit at least one person without harming anyone else), it can be concluded that the NE of the topological control game is Pareto optimal. □

In this section, we propose an energy-balanced topology control algorithm in which each sensor adaptively adjusts its transmit power according to the residual energy, and the implementation process of each phase of the algorithm.
The node must meet certain preconditions when running the algorithm: (1) the network node ID must be unique; (2) the node cannot be moved after deployment; (3) the transmit power of all nodes is continuously adjustable; (4) the nodes in the network can get some information needed to perform the power game, such as: the average residual energy of the nodes in the network and the information of network connectivity [23]; and (5) when all nodes have the maximum transmit power characteristics, the network topology graph formed by default is connected (this must support bidirectional link communications).
Nodes in EBTG initiate with the maximum power network and then try to update this topology iteratively according to their increasing unwillingness. EBTG consists of three phases: the initialization phase (topological establishment phase), the adaptation phase (power adjustment phase), and the topology maintenance phase.

Every node in topology control game algorithms that makes a topological decision needs to collect some network information. In EBTG, the information required by node i in the topology construction process is the local topology , which is an induced subgraph of . Every vertex of the directed graph corresponds to a node in WSN.
To obtain this decision information, node i initializes its transmit power with maximum power and discovers its neighbor nodes by broadcasting the “Hello” Message and collecting the responses provided by the receivers at . The message contains information such as node ID and remaining energy. By receiving and returning the message, a series of information, such as ID, transmit power and residual energy of its neighbor nodes, is learned and the maximum reachable neighbor set of node i and its maximum uplink set is determined. By establishing these sets, the largest global network topology view can be learned, thereby establishing a basis for subsequent routing decisions.
The detailed steps for initialization phase can be described as follows.

Node i in the adaptation phase determines its transmit power according to its current residual energy , the current transmitting power and the topology-related information collected during the initialization phase. The procedure of power adaptation is shown in Algorithm 1.
This paper adjusts the network topology structure through the power control method, sets the transmission power of the node as the optimal transmission power, and thus obtains the optimized network topological structure.
In the power adaptation phase, we first need to sort the node’s strategy set in descending order. The minimum available transmit power of node i can be calculated using the free-space model proposed in [24]. Algorithm 1 shows the pseudo-code of the adaptation phase.
The power adjustment sequence of the EBTG algorithm is based on the node ID, as shown in Figure 1, the transmit power of one node is adjusted for each round, and the remaining power of the node is unchanged. To ensure convergence to the NE, this algorithm uses the better response strategy update scheme proved in [19], which converges to the NE in the finite ordinal potential game. Given the power of other participants, the optimal response of node i is , which has . During the game, when the node selects a power lower than the current transmit power for communication, it is observed whether the corresponding integrated utility function value increases. If it is larger, it indicates that the lower power is more suitable for use as the transmit power; otherwise, the node keeps current transmit power unchanged.
The detailed steps for adaptation phase can be described as follows.
When the power of the node is changed, the communication radius, the neighboring node and its related links will change, which leads to the change of the network topology. As shown in Figure 2, when the transmit power of node i increases, node j will be included in its communication range; then, the nearest neighbor node of node i is changed from the original node k to the current node j. Therefore, node j can reduce its transmit power appropriately under the precondition of guaranteeing full network connectivity.

As time flows, the energy consumption of the nodes may become more unbalanced. Network topology maintenance must be performed dynamically, considering that the energy consumption between nodes will become unbalanced and possible node failures or deaths. For the topology maintenance phase, we designed an event-triggered approach that adaptively regenerates a more balanced network topology.
The power game process can be implemented by comparing the residual energy of nodes with the energy threshold or by setting the period to balance the load of nodes and prolong the network lifetime. The detailed steps for topology maintenance phase can be described as follows. Algorithm 2 shows the pseudo-code of the topology maintenance phase.
Theorem 3.
If the is a connected network, the EBTG algorithm converges to the NE state that can maintain the connectivity of network .
Proof.
It is known from Theorem 1 that the topological control game model constructed in this paper is an ordinal potential game. In the EBTG algorithm proposed in this paper, the node increases its benefit function value by adjusting the choice of strategy (i.e., reducing the power value of the node) until the selection strategies of all nodes are not changed. Obviously, this state is a NE. It is assumed that node i obtains greater benefits in the power , and the network is disconnected when the power of the other nodes is unchanged; therefore:
In addition,
Obviously, Equation (10) is not tenable, thus obtaining the connected network at each round of the game execution of the EBTG algorithm. □

Sensors in wireless sensor networks have been restricted to local communications and want to reduce their own energy consumption selfishly. Furthermore, the unbalanced energy consumption between nodes is likely to shorten the network lifetime.
Based on the theory of potential games and the Theil index, an optimized utility function was proposed for WSNs. This function takes the residual energy of nodes, the transmitting power of nodes and the connectivity of the network into account. On this basis, a topological game model was constructed, and we proved that there is Pareto optimal NE in the model. Thus, an energy-balanced WSN distributed topology game algorithm called EBTG was proposed. From the simulation results, it can be concluded that the EBTG algorithm can effectively reduce the power of the transmitting node, balance the load between nodes, improve the energy efficiency of the network and prolong the network lifetime to ensure network connectivity and robustness.
In future work, we will study the operation of this algorithm in a real-world wireless communication environment to improve the reliability and stability of the algorithm. 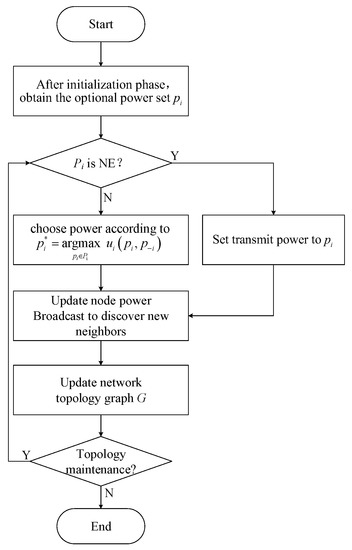 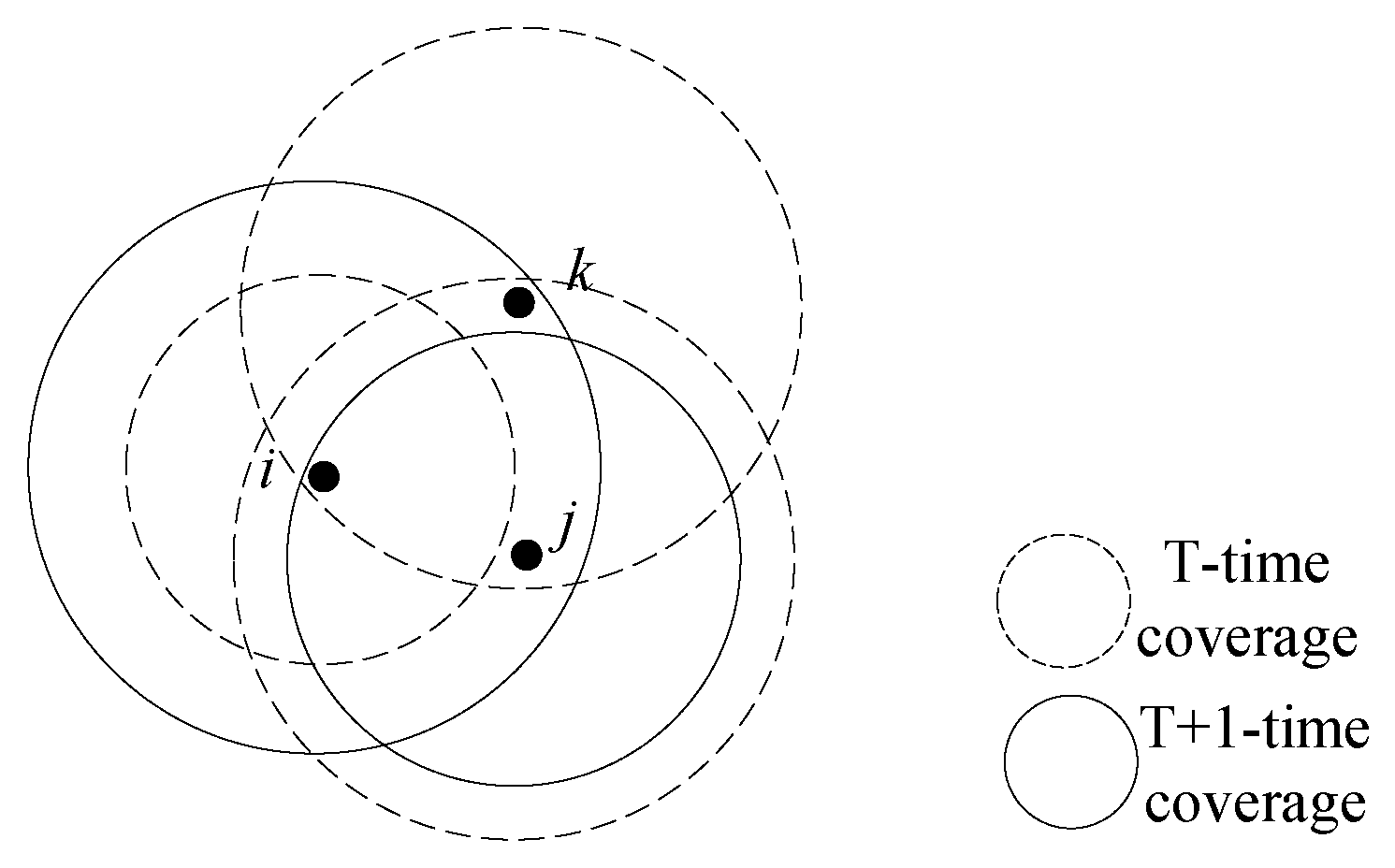 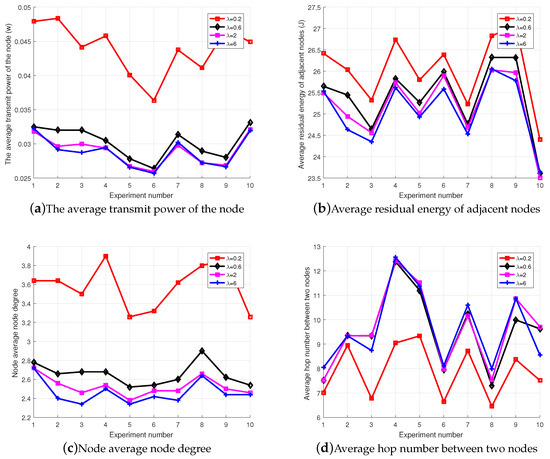 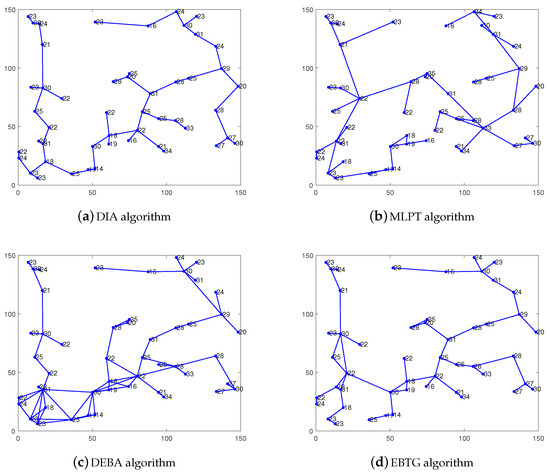 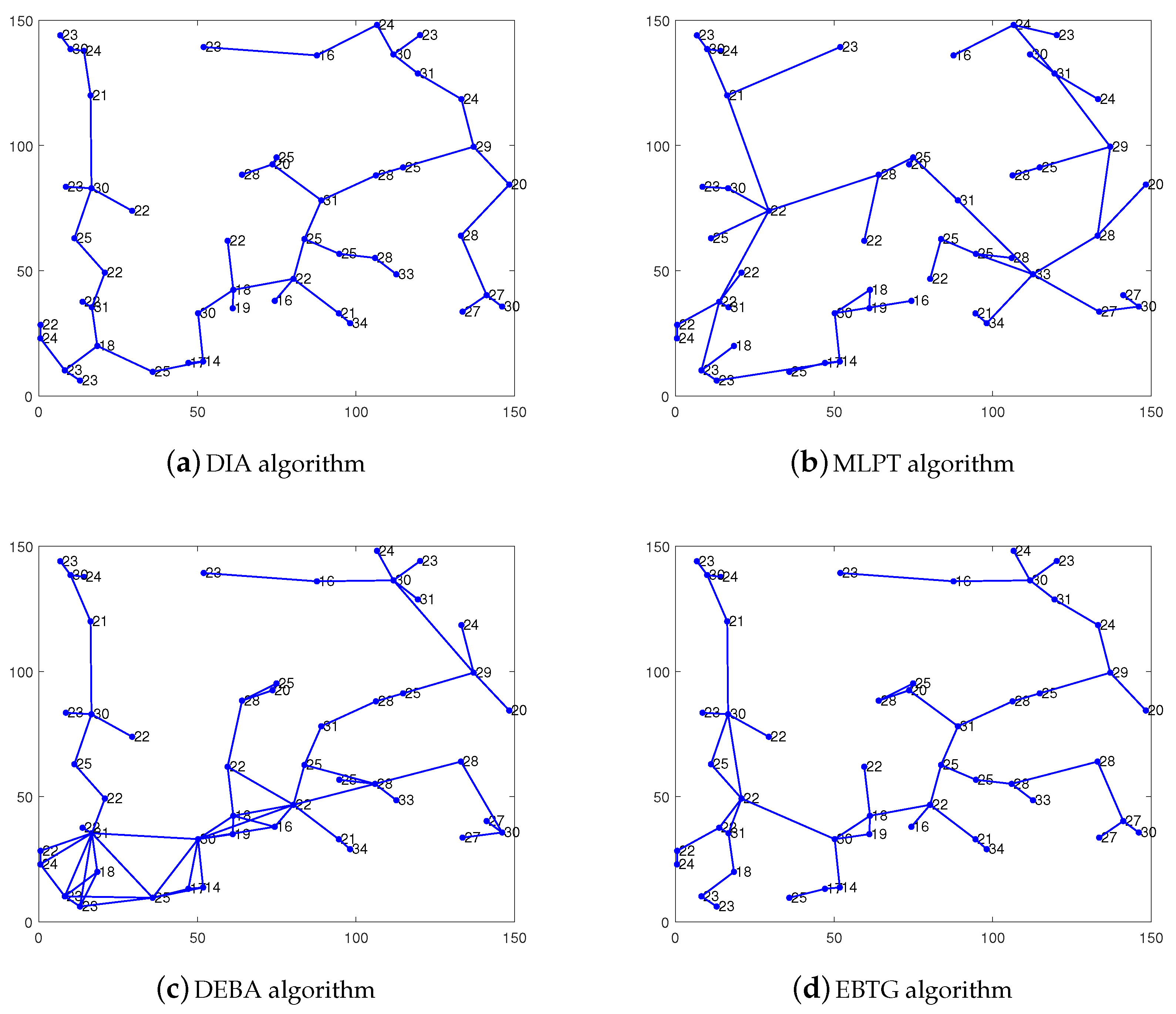 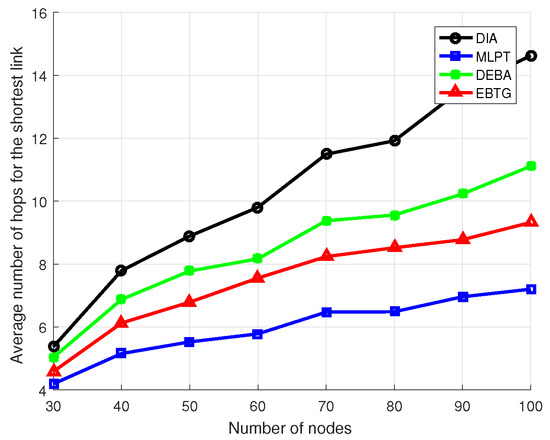 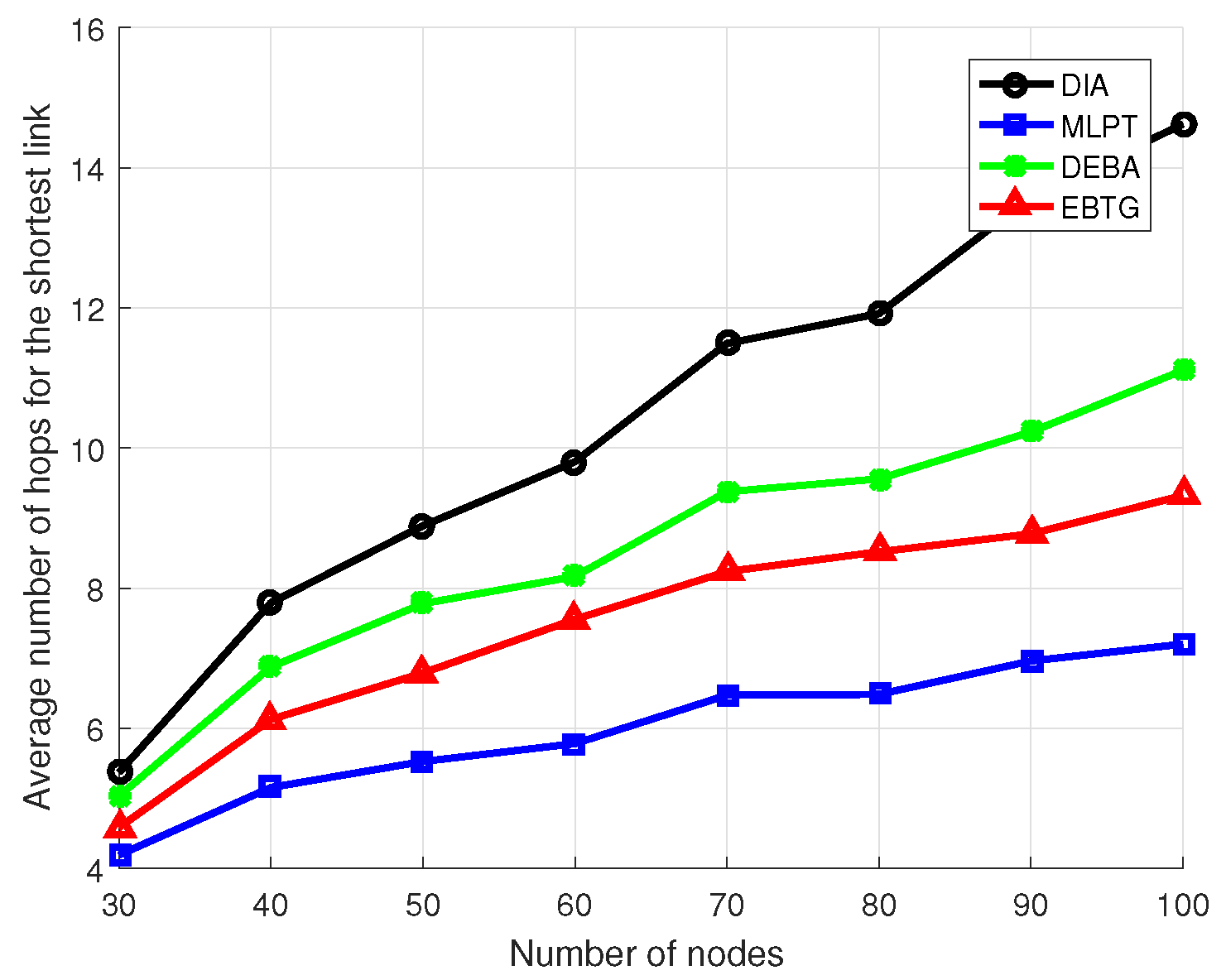 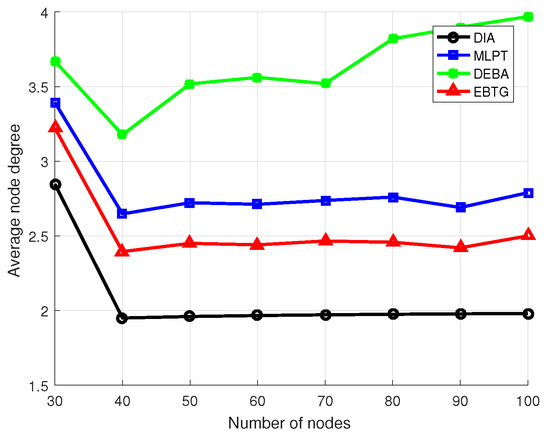 Table 1. Experimental parameters.
Table 1. Experimental parameters.
© 2018 by the authors. Licensee MDPI, Basel, Switzerland. This article is an open access article distributed under the terms and conditions of the Creative Commons Attribution (CC BY) license (http://creativecommons.org/licenses/by/4.0/).
We use cookies on our website to ensure you get the best experience. Read more about our cookies here.
Accept
We have just recently launched a new version of our website. Help us to further improve by taking part in this short 5 minute survey here. here.
Never show this again