Given the analyses in Section 3.1, the DOP values of orbit parameters were found to have a high correlation with orbit accuracy, especially when observations are sufficient. Therefore, in the last arcs of the observed ultra-rapid orbit, the accuracy of the orbit influenced by the observations may be corrected indirectly by the corresponding DOP values as detailed below.
Assume the observation equation of one epoch is [11]: where i represents the ti-th epoch, V(ti) the residuals of the equation, X(ti) the orbit parameters (positions and velocities), L(ti) the observations, and A(ti) the design matrix expressed as [10]: where m and n denote the number of satellites and stations, respectively, and denote the partial derivatives of the geometric distance between satellite sm and station rn with reference to the satellite positions and velocities as in [26]: where tr is the signal reception time and ∆t the time taken for the signal to go from satellite to station.
From Equation (1), the cofactor matrix can be expressed as: where P is the weight matrix of the observations, which is elevation-dependent for observations below 30° as in [26]; the observations below 10° are deleted when using Equation (1). Then, the DOP value of the k-th parameter is:
Hence, the initial precision of one parameter can be expressed as: where σ0 is related to the accuracy of observations.
To build the orbit correction function, the total DOP values up until the current epoch for one orbit parameter is:
Here represents the total values of the k-th parameter between the first and ti−1 epoch.
Suppose that the parameter corrections of the orbital states of a satellite are dX(ti), which can be expressed as functions of [DOP(ti)]; hence: where f(·) is the orbit correction function, which is determined by the orbit length and interval. Moreover, dX(ti) denotes the corrections for positions and velocities of a satellite as given in Equation (3). From the equations of the orbit determination, the DOP values of the orbit parameters of each epoch can be accurately acquired. Therefore, the function models between the orbit parameter corrections and the DOP values can be built based on different mathematical models, which should be selected before orbit correction. In this section, to clearly describe the correction method, the polynomial model chosen as an example to discuss is: where α represents the polynomial coefficient, ξ the fitting residual, and d the order of the polynomial function. In Equation (10), d should be selected based on the Akaike information criterion [27] to avoid polynomials of too-high order in different orbit determination solutions. Moreover, the maximum of d should be less than 9. The function between the orbit parameters corrections and the corresponding DOP values may be established by estimating the polynomial coefficients accurately. For a low accuracy of the last arc in the observed ultra-rapid orbit, the corrections may be acquired indirectly using Equation (9), which takes the DOP values as independent variables. Following [28] and the characteristics of the DOP values, the orders of the polynomial function should be calculated using the Akaike information criterion [27] to describe the trend well. We assume the DOP values for a satellite have the form: where θ denotes polynomial coefficient; e the model error, and tj the epoch number. Stacking all available DOP values as a vector, Equation (11) becomes: where G represents the coefficient matrix, the residuals of the fitting models, and T. Thus, the coefficient of the DOP function is:
Setting the current epoch as , then, the predicted is:
Substituting the predicted DOP values into Equation (9) yields the orbit corrections and improves the orbit accuracy. However, the correction method mentioned concerning the observed ultra-rapid orbit is based on the optimal geometrical configuration between satellites and stations. Theoretically, the more tracking stations and the more uniform the distribution of the stations, the better the geometrical configuration is for orbit determination. However, because of timeliness of the ultra-rapid orbit, it is impossible to deal with all observations downloaded by the ACs. Hence, strategies for orbit determination, taking accuracy and timeliness into account, are discussed in the following sections.

Because the tracking-station distributions in an ultra-rapid-orbit determination is unavailable, the simulation experiments are used to verify the orbit correction method. The hourly observations steadily downloaded were merged into daily data files to incorporate them into the orbit determination. The main steps of the simulation experiments are as follows:

Step 1:
Prepare the navigation files, list of stations, and station coordinates and merge daily observations (without the last 3 h of observations); in addition, all observations are preprocessed to refine the initial list of stations in the orbit determination;
Step 2:
Calculate epoch-wise the DOP values of each parameter, then accumulate and add them to the orbit correction equations;
Step 3:
Compare the determined and predicted ultra-rapid orbit with the multi-GNSS rapid precise orbit of GFZ to obtain the orbit residuals;
Step 4:
Establish the function models between the orbit state parameters and its corresponding accumulated DOP values;
Step 5:
Predict the DOP values of the last 3 h of the observed parts;
Step 6:
Incorporate the predicted DOP values into the orbit correction function to correct the observed part and obtain the predicted parts.

To take into account timeliness and accuracy of the ultra-rapid-orbit determination, the geometrical configuration between tracking stations and the satellites must be an optimal or sub-optimal distribution. According to previous research [10,11], there is an exponential relationship between the number of stations and the DOP values in the orbit determination. To weight the contribution of a single station in the parameter estimations, this study defines the amplification factor of the DOP values, specifically, the impact of a single station on the overall DOP values [11], where DOPi indicates the DOP values based on all stations except the i-th station, and DOP0 represents the total DOP values before elimination. Note that, given the same distribution of stations, the more stations there are, the smaller are the DOP values. Moreover, in Equation (15), DOP0 is one more station than DOPi. Therefore, DOPi is always than DOP0 in Equation (15). Based on different amplification factors of the DOP values, the main steps to optimize the tracking stations distribution are the following:

Step 1:
Obtain the initial stations list, observation files, navigation files, and the corresponding stations coordinates;
Step 2:
Calculate the DOP0 values of initial stations list after data preprocessing;
Step 3:
Loop all stations to output the ki (amplification factors of i-th station) of every station;
Step 4:
Compare ki with the given k; if ki is greater than k, the corresponding station is stored in the list of stations;
Step 5:
Assess whether timeliness can be meet with the requirements based on the selected list of stations; if not, continue to expand k;
Step 6:
Output the final list of stations for orbit determination.

With this procedure, the station distribution can be optimized for ultra-rapid-orbit determination, which indirectly takes orbit accuracy and timeliness into consideration. To describe the steps in the station optimization in more detail, Figure 8 shows the experimental processes.
To analyze the effect of the station optimization methods, this study set the amplification factors to 5%, 10%, 15%, and 20%, in sequence. The list of GFZ is chosen as a reference to compare the station optimization schemes. Similarly, the observations of 409 stations downloaded by the ACs were included in the experiments. Figure 9 shows the global distributions of the different schemes. For each scheme, the orbit correction method based on the DOP values proposed in this study was used to assess the optimization strategy.
Based on the above five schemes for ultra-rapid-orbit determination, the experiments were conducted as described in Section 3.2. First, the station distributions were selected based on the different DOP-derived amplification factors. The orbit determination and correction experiments are based on a combination of 21-h observations. The accuracy of the orbit determination takes the 409 stations as references during the 24-h period to calculate the orbit accuracy in the last 3 h. In the experiments, a single month (DOY 122–151, 2016) of orbit accuracy data was obtained; the corresponding orbit 1D RMSs are plotted in Figure 10.
The key legend for all four graphs is given in panel Figure 10d. In addition, to compare the distribution of widely used stations with that for the optimized stations, 90 stations were randomly selected and added to the orbit determination schemes.
Table 7 shows the correction results of the different satellite systems under different schemes and the corresponding number of stations. However, note that the list of stations did not change during the month for the orbit determination experiments. Moreover, the list of stations from different schemes were re-selected to ensure the reliability of the experiment results before determining orbit solutions. Moreover, in Table 7, the orbit determination of the amplification factors 5% and 10% with the same stations for BDS show an increasing 1D RMSs, which produces changes in the parameter values related to the orbit, such as the troposphere and station clocks, based on different stations of other systems.

This research was funded by the Jiangsu Dual Creative Teams Program Project Awarded in 2017, the Independent Innovation Project of “Double-First Class” Construction, Grant No. 2018ZZCX08. 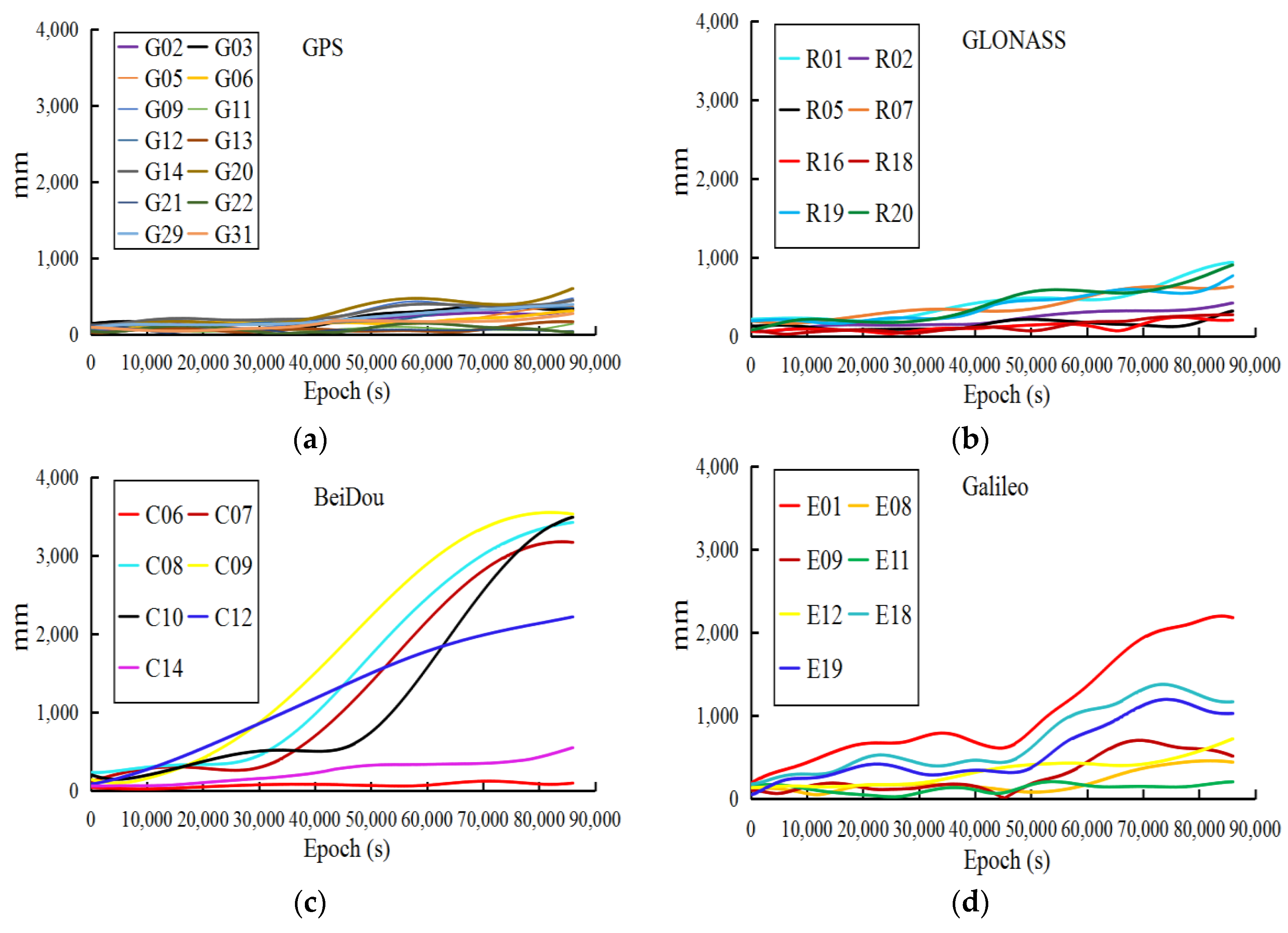 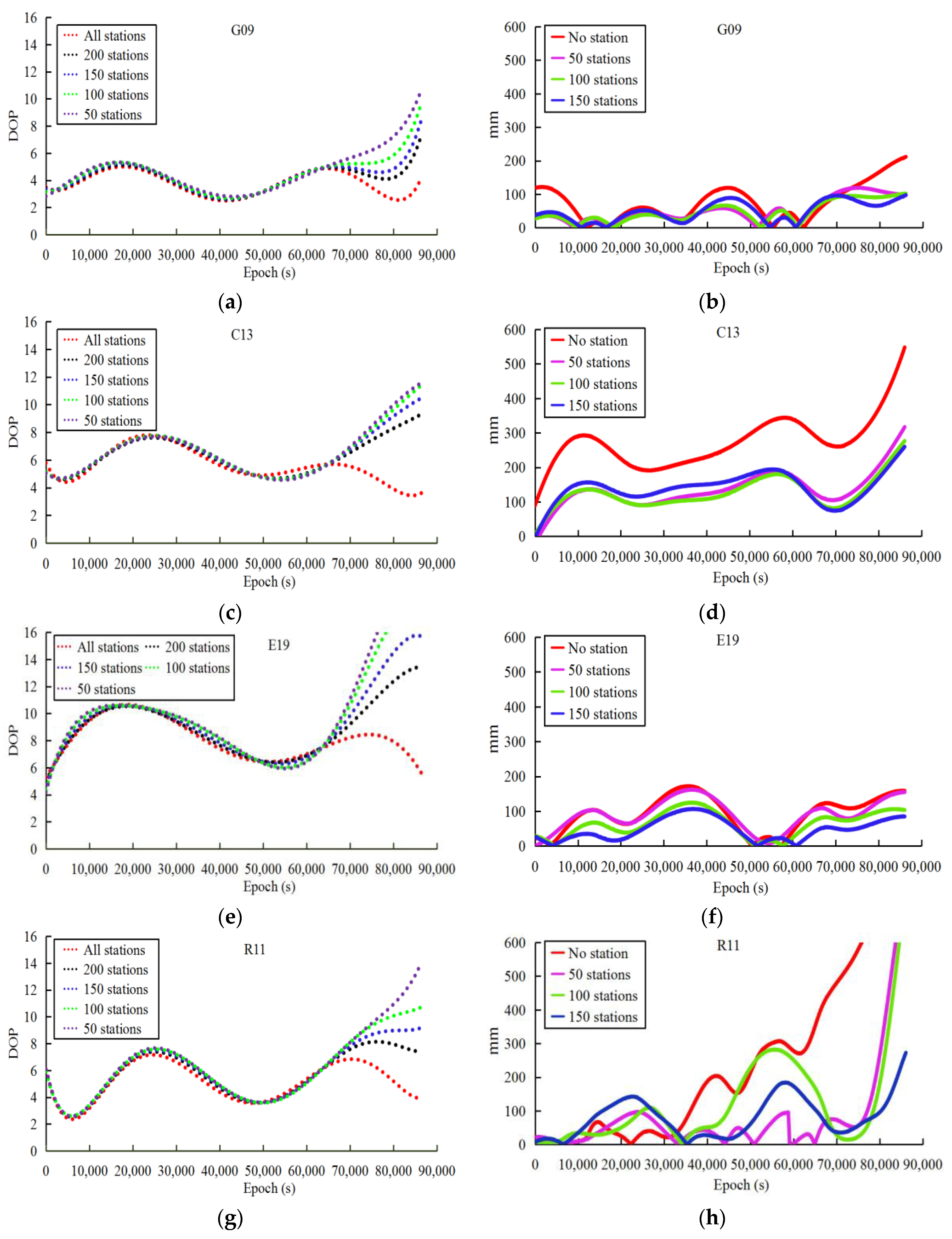 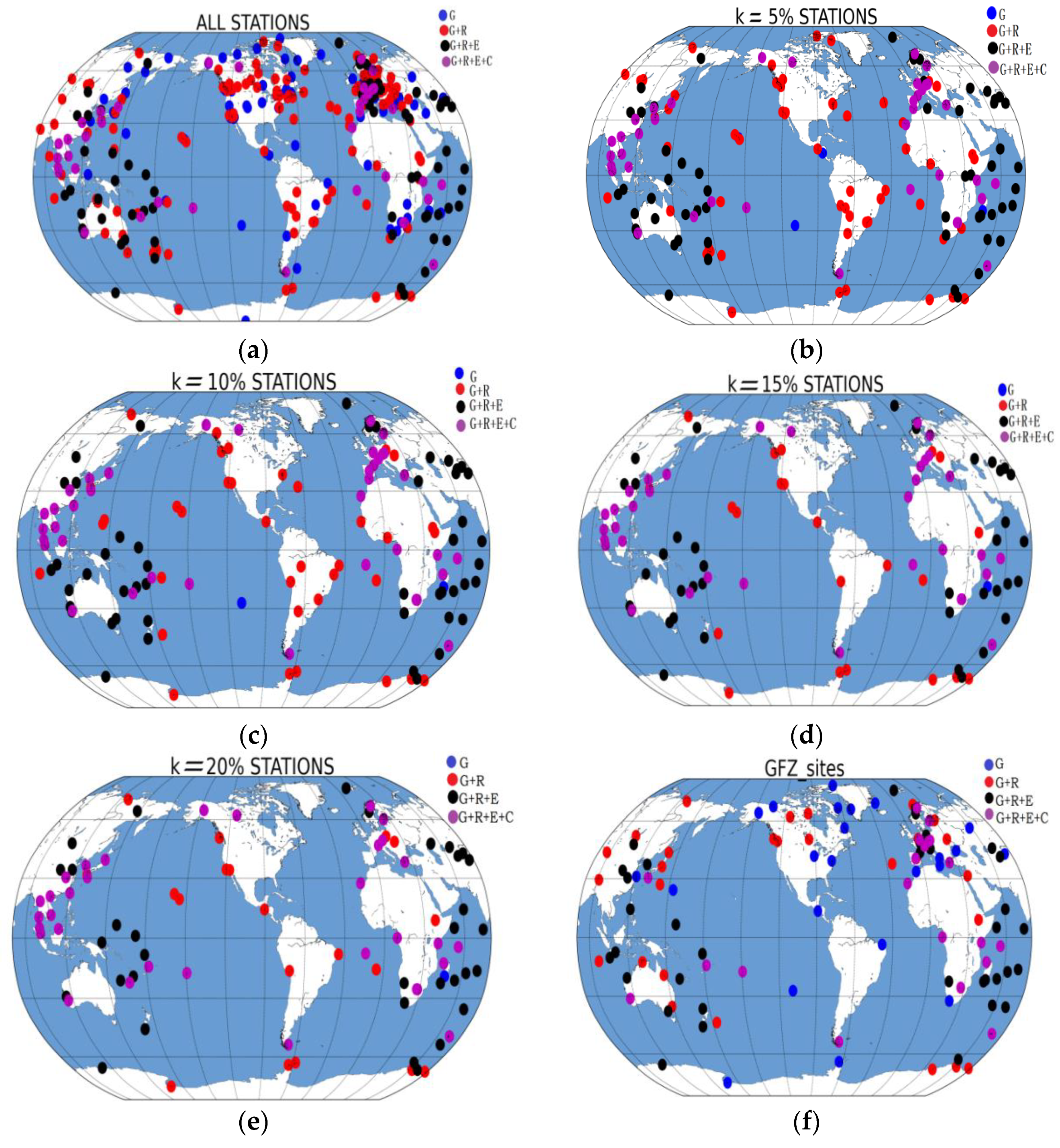