:
Using arrays with digital MEMS (Micro-Electro-Mechanical System) microphones and FPGA-based (Field Programmable Gate Array) acquisition/processing systems allows building systems with hundreds of sensors at a reduced cost. The problem arises when systems with thousands of sensors are needed. This work analyzes the implementation and performance of a virtual array with 6400 (80 × 80) MEMS microphones. This virtual array is implemented by changing the position of a physical array of 64 (8 × 8) microphones in a grid with 10 × 10 positions, using a 2D positioning system. This virtual array obtains an array spatial aperture of 1 × 1 m2. Based on the SODAR (SOund Detection And Ranging) principle, the measured beampattern and the focusing capacity of the virtual array have been analyzed, since beamforming algorithms assume to be working with spherical waves, due to the large dimensions of the array in comparison with the distance between the target (a mannequin) and the array. Finally, the acoustic images of the mannequin, obtained for different frequency and range values, have been obtained, showing high angular resolutions and the possibility to identify different parts of the body of the mannequin.
Keywords:
virtual array; MEMS microphones; high resolution acoustic images

This section shows the acquisition and processing system, based on a 2D array of MEMS microphones and the 3D positioning system used in this study.
The acoustic images acquisition system used in this paper is based on a Uniform Planar Array (UPA) of MEMS microphones. This array, which has been entirely developed by the authors, is a square array of 64 (8 × 8) MEMS microphones that are uniformly spaced every 2.5 cm in a rectangular Printed Circuit Board (PCB), as shown in Figure 1.
This array was designed to work in an acoustic frequency range between 4 and 16 kHz. The 2.5 cm spacing corresponds to λ/2 for the 8 kHz frequency. This spacing allows a good resolution for low frequencies, while avoiding grating lobes for high frequencies in the angular exploration zone of interest.
For the implementation of this array, MP34DT01 microphones of STMicroelectronics—digital MEMS microphones with PDM interface—were chosen, with the following features: low-power, omnidirectional response, 63 dB SNR, high sensitivity (−26 dBFS) and a nearly flat frequency response (±6 dB in the range of 20 Hz to 20 kHz).
A MyRIO platform [9] is the base unit for this system. This platform belongs to the Reconfigurable Input-Output (RIO) family of devices from National Instruments, which is oriented to sensors with nonstandard acquisition procedures. The embedded processor included in myRIO can run all software algorithms to generate acoustic images, so it can be used as a standalone array module formed by a myRIO connected to a MEMS array board, as shown in Figure 1. Although myRIO can work as a standalone system, the lack of display means that it is usually controlled from a PC connected using a Wi-Fi interface. In a global hardware setup, as shown in Figure 2, the system includes a PC and one or more array modules.
The algorithms implemented in the system, shown in Figure 3, can be divided into three blocks: MEMS acquisition, signal processing and image generation (wideband beamforming and image storage). The programming language used is LabVIEW 2015, along with its Real Time, FPGA, and Graphical Processing Unit (GPU) modules, which allows developing applications on different hardware platforms such as those used in the system: FPGA, Embedded Processor (EP), PC, and GPU.
A processing platform, enabled to work at a low level—to acquire signals—and at a high level—to implement spatial processing algorithms—using low cost commercial systems, was defined. The processing algorithms are shared between the FPGA and the PC, excluding beamforming, which is implemented on the GPU, as shown in Figure 3. The embedded processor is used to control and transfer data between the PC and FPGA.

The array module is moved in space with a Cartesian 3D positioning system, capable of positioning the array inside a cubic volume of 1500 × 1500 × 1500 mm3 with repeatability accuracy of 0.02 mm in each spatial dimension. It is shown in Figure 4. While it is a 3D positioner, only two dimensions are being used in this application.

The explained 8 × 8 planar array of MEMS microphones is placed on a 2D positioning system, as can be observed in Figure 4. To obtain the virtual array, the position of this 8 × 8 array is changed on the vertical and horizontal directions, moving it on a surface that is parallel to the array itself. The array obtains an acoustic image of the target under test in each of these positions.
The data acquired by the 8 × 8 array in each of the positions are added in a data structure, equivalent to the one that would be obtained with an array of hundreds or thousands of sensors. These data is spatially processed, using a beamforming algorithm, to obtain the high resolution acoustic images.
In this work, a virtual array has been developed by moving the single 8 × 8 array on a grid of 10 × 10 positions, using two different steps in both directions:
With this procedure, an array of 80 × 80 microphones with uniform 1.25 cm spacing has been developed. Table 1 shows the characteristics of this virtual array, and Figure 5 shows the sensor positions of the virtual array.
An array of 80 × 80 sensors, uniformly spaced at 1.25 cm, has a high spatial resolution, as can be observed in Figure 6. Figure 6 shows the theoretical beam pattern of this 80 × 80 array working at two different frequencies, 4 and 15 kHz, pointing to the broadside (azimuth = 0° and elevation = 0°). For these frequencies, it can be observed that the main lobe widths of the beam patterns are 4.8° and 1.6°, respectively.
The tests done with this 80 × 80 virtual array have been carried out inside a hemianechoic chamber with a 5 × 3 × 2.5 m3 working area. The problem of working with such a large array inside this hemianechoic chamber is that the plane wave assumption is not reasonable because of the ratio between the array spatial aperture and the distance between the target and the array. The array is too close to the target and the acoustic waves are spherical, as can be observed in Figure 7. Figure 7 shows that this effect is clearer if the array is pointing to directions away from the broadside.
Spatial resolution of the virtual array depends linearly on the array spatial aperture and it is inversely proportional to the working frequency [29], as shown in Figure 8a. In this work, a virtual array with a size of 1 m × 1 m that works with a maximum frequency of 15 kHz has been used. Under these conditions, the obtained spatial/angular resolution is 1.6° for this virtual array. This value is smaller than the resolution of the physical 8 × 8 array, which is 6.4°. In the developed system, where the positioning system has a maximum length of 1.5 m (112 × 112 sensors), the maximum spatial resolution that could be obtained would be 1.1°.
The dynamic range in these systems, that is, the maximum working angle, is fixed by the presence of grating lobes (spatial aliasing) [1,2]. Using this virtual array, sensor spacing is halved, so the dynamic range increases if it is compared with the physical array. Figure 8b shows that the maximum range of the 8 × 8 physical array is ±90° for working frequencies below 10 kHz and it decreases to ±28° at the maximum working frequency of 15 kHz. Using the virtual array, these limits increase up to 13 kHz for the maximum range of ±90°, and to ±51° for the maximum working frequency of 15 kHz.
After this theoretical analysis of the 80 × 80 array, this virtual has been used to obtain acoustic images of a mannequin, by using the SODAR principle shown in Figure 9: a tweeter generates a known sound signal towards the mannequin under test; this signal is reflected over it; and the microphones of the array receive the reflected signal. Finally, the signal that is received by the array is used to obtain the acoustic images of the mannequin.

Some tests have been carried out with a mannequin placed on a fixed point inside the anechoic chamber, 240 cm opposite the array. This mannequin has been placed in two different positions: one with the arm up, as can be observed in Figure 10a, and the other one with the arm down, as shown in Figure 10b. The working frequency of the system for these tests is 15 kHz.
Acoustic images of the mannequin in the two different positions have been obtained using the physical 8 × 8 array and also using the 80 × 80 virtual array to see the different performance of both arrays. The obtained acoustic images using both arrays and both mannequin positions are shown in Figure 11. In the acoustic images of the mannequin with the arm up, the response of this arm to the transmitted acoustic signal can be noticed. These responses are highlighted with a red ellipse on the corresponding images of Figure 11.
These figures show that the acoustic images obtained with the 80 × 80 virtual array (Figure 11b) have a higher resolution than the acoustic images obtained with the 8 × 8 physical array (Figure 11a), due to its larger “virtual” spatial aperture.

3.2. Analysis of Frequency and Range Dimensions

Once the higher resolution of the virtual array has been verified, more tests have been carried out to analyze the influence of changes in the frequency and the range dimensions, on the array resolution.

The next tests have been carried out with a fixed value of the frequency dimension to 13 kHz. In these tests, the value of the range dimension has varied for each one, also obtaining different acoustic images of the mannequin. These acoustic images are shown in Figure 13.
An analysis of Figure 13 shows that different parts of the body of the mannequin can be identified at different distances from the array. For example, images in Figure 13 show that:
These high resolution acoustic images could be used to identify people in biometric acoustic systems. Thus, a deep analysis of the acoustic images would be useful to extract representative parameters in their four dimensions, i.e., azimuth, elevation, frequency and range, and also to obtain which of these dimensions are more representative in the identification tasks.

A virtual array of 80 × 80 MEMS microphones has been developed moving a single 8 × 8 planar array of MEMS microphones on a grid of 10 × 10 positions, by means of a 2D positioning system. The developed virtual array has been tested by using it to obtain acoustic images of a mannequin in two different positions, using the system as an active SODAR.
The objective of this virtual array is to obtain a system with the performance of a system formed by thousands of sensors, but working only with dozens of them. A large array is associated to a high spatial aperture, and therefore to a high spatial resolution. This increment in the spatial resolution using such a virtual array allows obtaining high resolution acoustic images.
Analyzing the dependence of the acoustic images with their frequency and range dimensions it can be observed that: (i) there is an increment in the spatial resolution of the acoustic images with the frequency; and (ii) different parts of the body of the mannequin can be identified at different distances/ranges from the array. 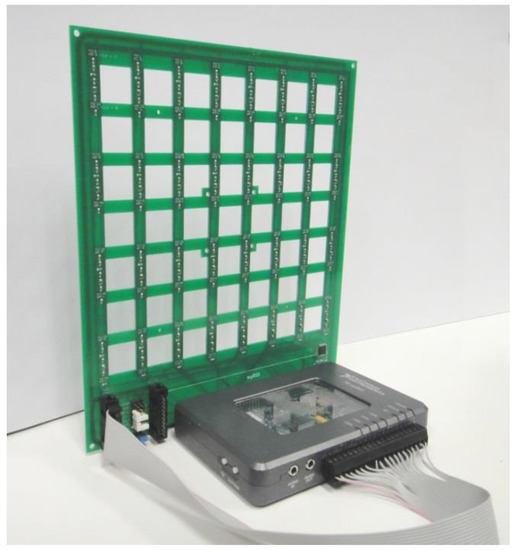 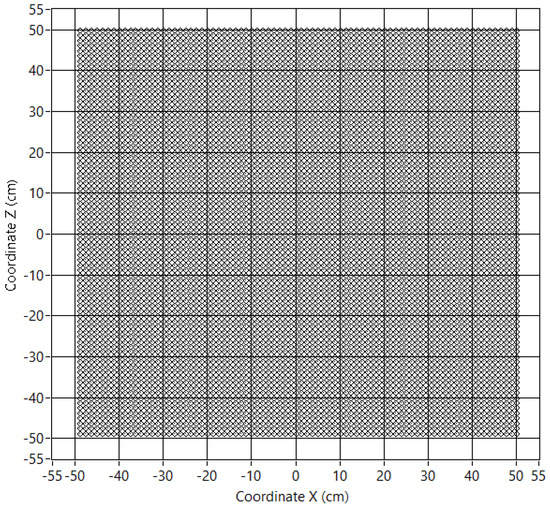 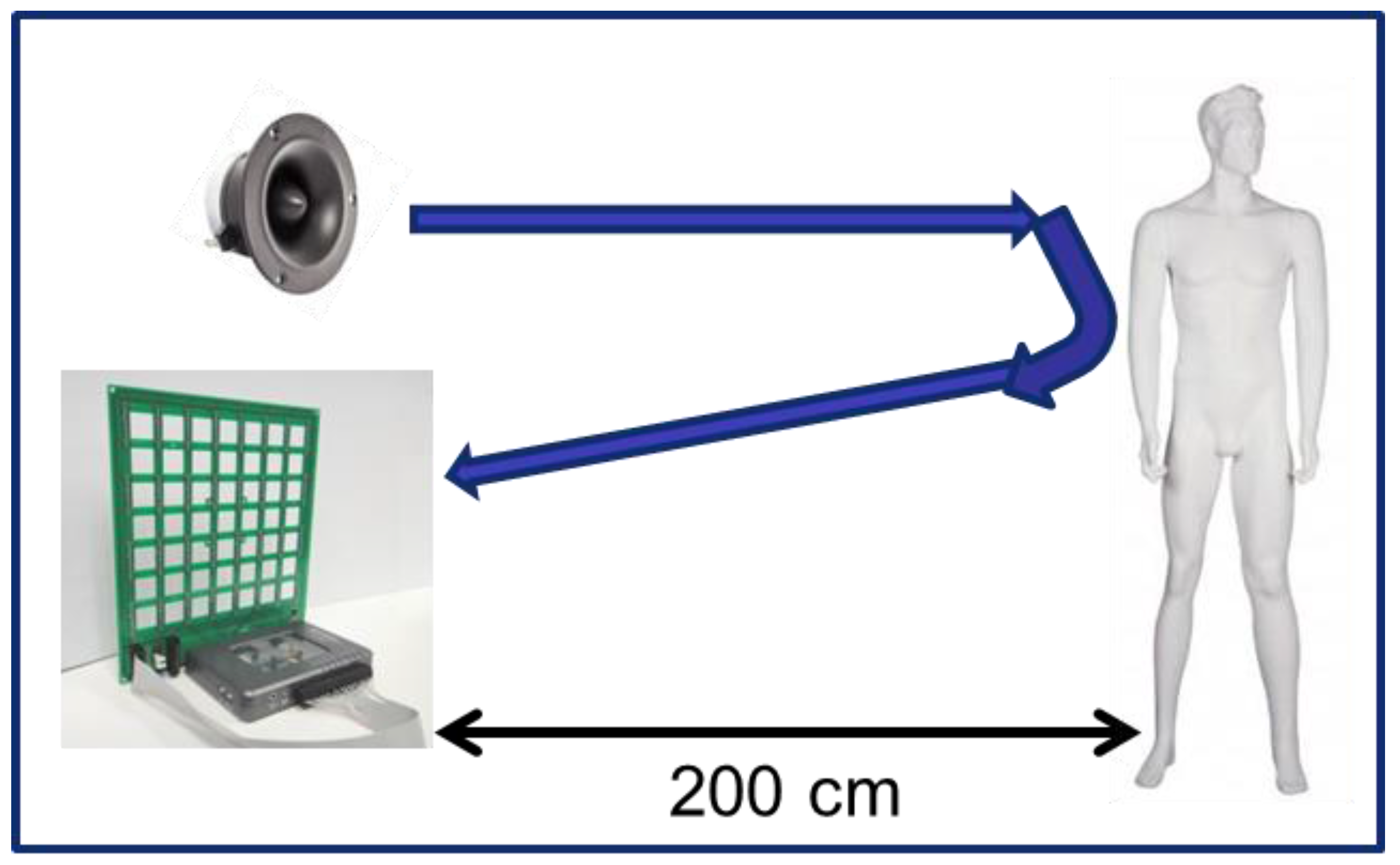 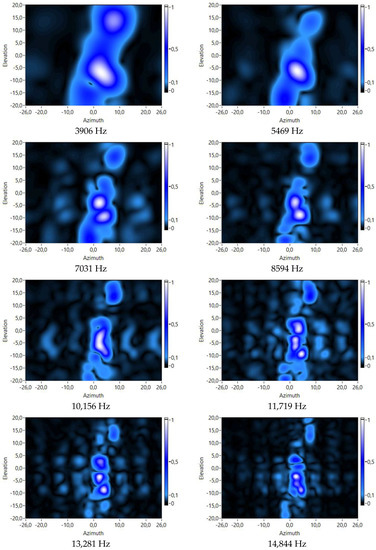 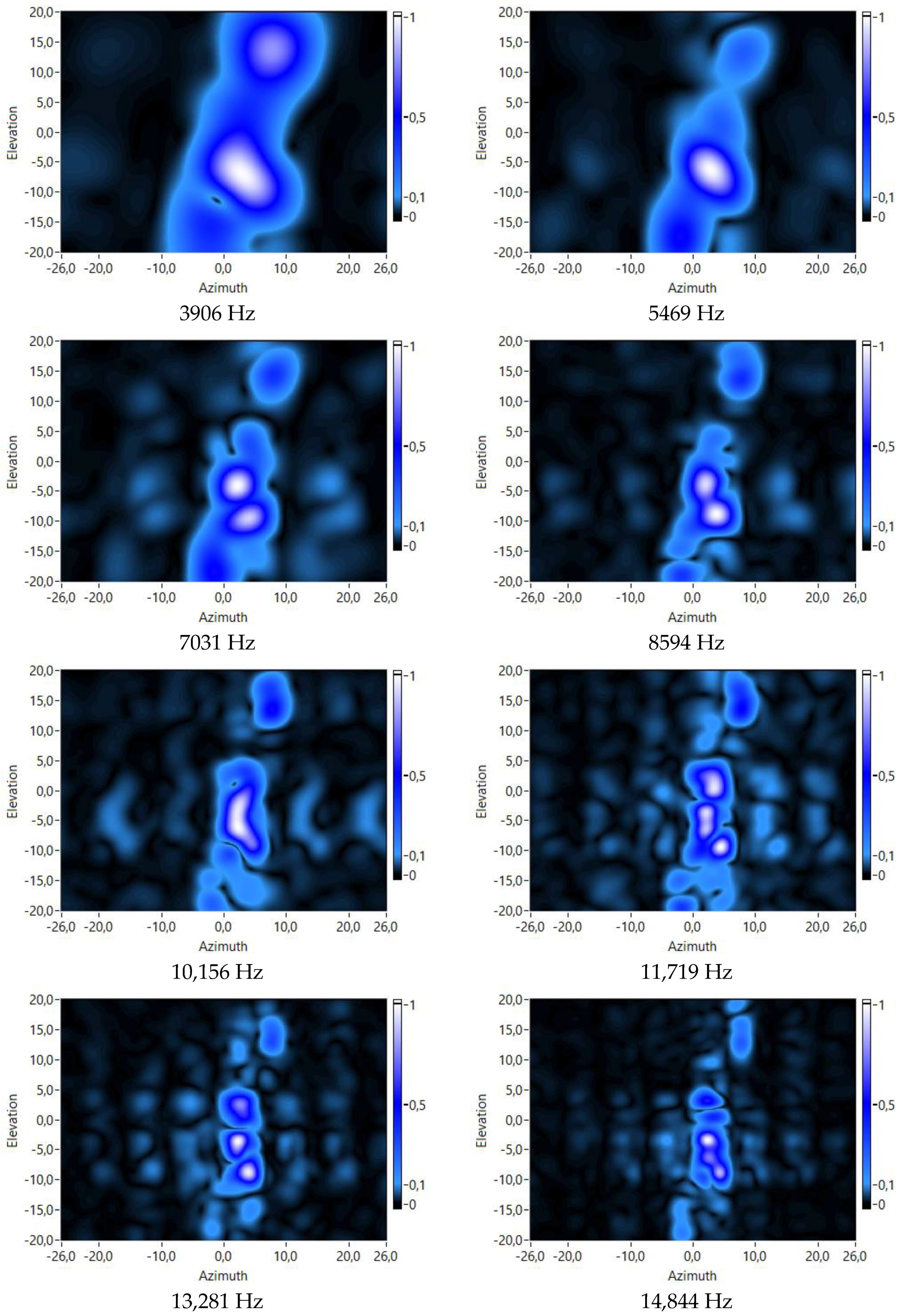 Table 1. Virtual array characteristics.
Table 1. Virtual array characteristics.
© 2017 by the authors. Licensee MDPI, Basel, Switzerland. This article is an open access article distributed under the terms and conditions of the Creative Commons Attribution (CC BY) license (http://creativecommons.org/licenses/by/4.0/).
We use cookies on our website to ensure you get the best experience. Read more about our cookies here.
Accept
We have just recently launched a new version of our website. Help us to further improve by taking part in this short 5 minute survey here. here.
Never show this again