On the road towards 5G, a proliferation of Heterogeneous Networks (HetNets) is expected. Sensor networks are of great importance in this new wireless era, as they allow interaction with the environment. Additionally, the establishment of the Internet of Things (IoT) has incredibly increased the number of interconnected devices and consequently the already massive wirelessly transmitted traffic. The exponential growth of wireless traffic is pushing the wireless community to investigate solutions that maximally exploit the available spectrum. Recently, 3rd Generation Partnership Project (3GPP) announced standards that permit the operation of Long Term Evolution (LTE) in the unlicensed spectrum in addition to the exclusive use of the licensed spectrum owned by a mobile operator. Alternatively, leading wireless technology developers examine standalone LTE operation in the unlicensed spectrum without any involvement of a mobile operator. In this article, we present a classification of different techniques that can be applied on co-located LTE and Wi-Fi networks. Up to today, Wi-Fi is the most widely-used wireless technology in the unlicensed spectrum. A review of the current state of the art further reveals the lack of cooperation schemes among co-located networks that can lead to more optimal usage of the available spectrum. This article fills this gap in the literature by conceptually describing different classes of cooperation between LTE and Wi-Fi. For each class, we provide a detailed presentation of possible cooperation techniques that can provide spectral efficiency in a fair manner. View Full-Text
Keywords: LTE; Wi-Fi; cooperation; coexistence; cognitive radio; spectral efficiency; fairness LTE; Wi-Fi; cooperation; coexistence; cognitive radio; spectral efficiency; fairness
►▼ Show Figures 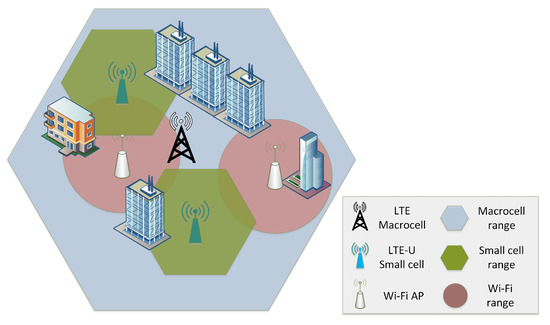